Colombia is a vibrant country that’s become a rising star in South America. With its lush rainforests, soaring mountains, and two coasts, it’s a paradise for avid adventurers. And then there’s the vibrant culture and history, which is palpable in tiny towns and huge cities alike. The “Classic Circuit” is a favorite for travelers looking to experience Colombian culture, bringing you to Bogota, Medellin, and Cali. In each, you’ll find everything from Colonial architecture to modern rejuvenation to irresistible rhythms. Plus, when you travel with Daytrip, you not only get the safest and most convenient way to travel between cities, but also the opportunity to stop in picturesque towns where tradition is alive and well. 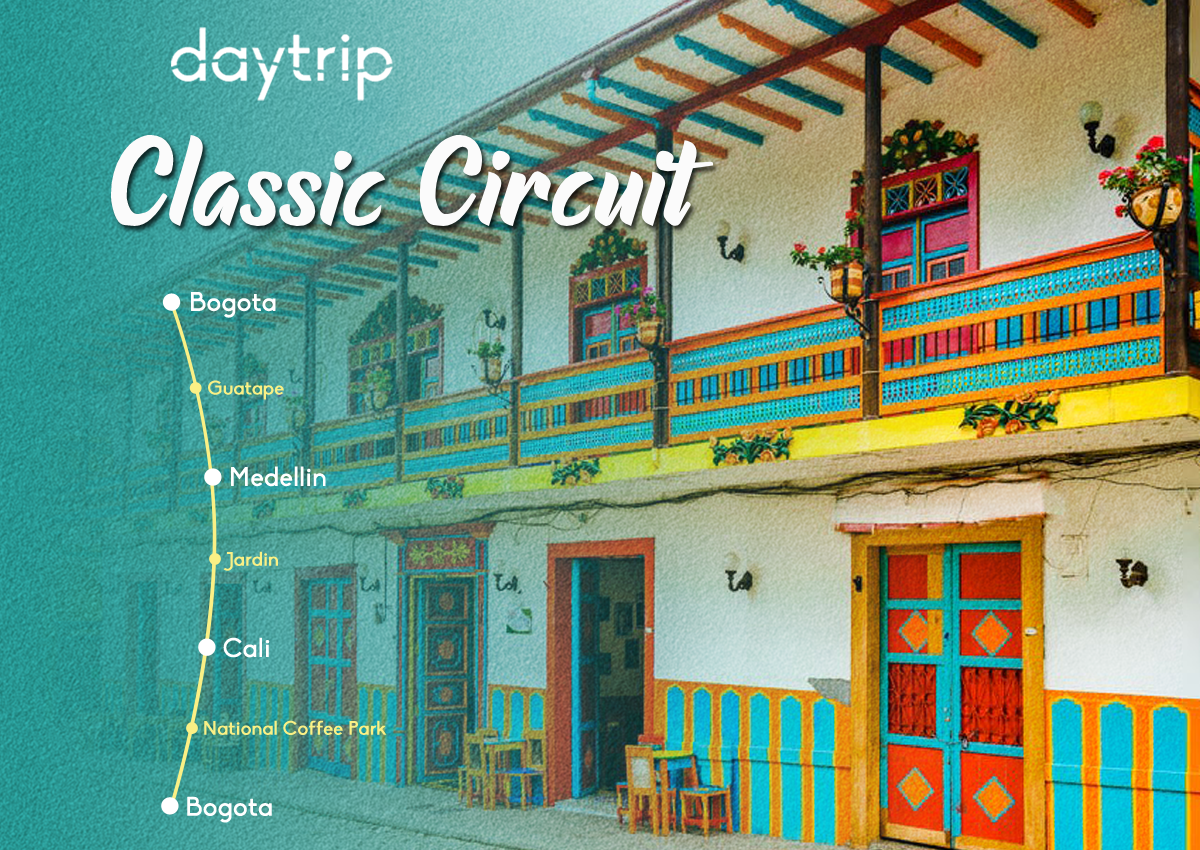 For the first leg of your tour, head from Bogota to Medellin, with a stop in colorful Guatape. 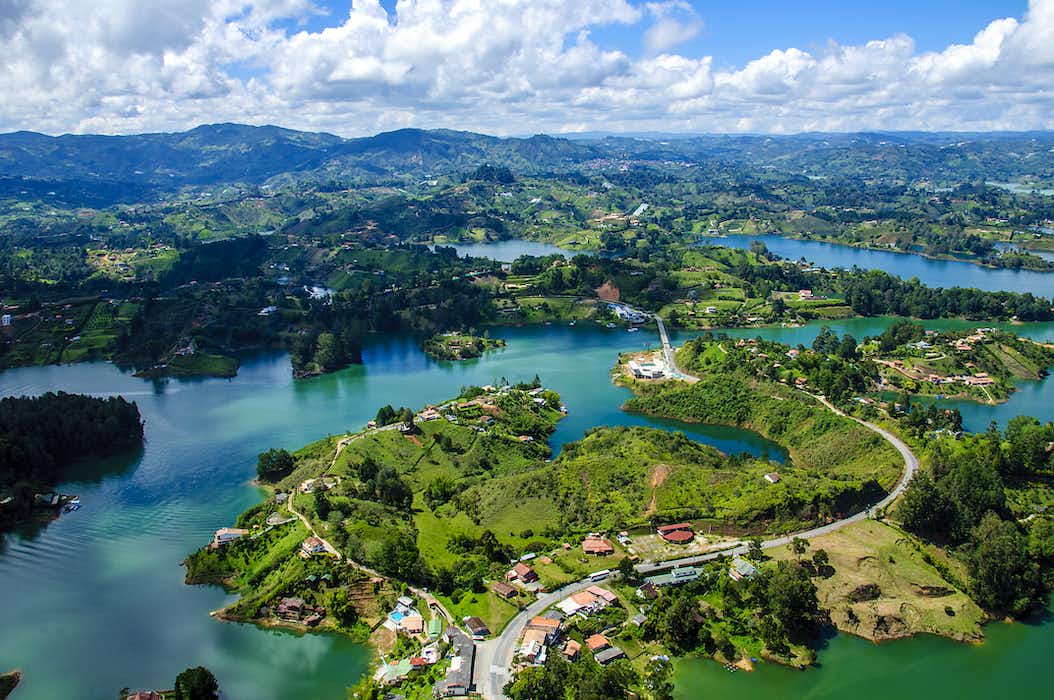 After loosing much of the farmland to flooding from a hydroelectric dam in the 1970s, Guatape reinvented itself as one of Colombia’s must-visit destinations. The draw of the “most colorful town in Colombia” are the kaleidoscopically colored houses adorned with vibrant ceramics. Take 90 minutes to wander the streets, sipping coffee, and filling up your camera roll. If you’re up for it, climb the 742 stairs to the top of the Piedra del Peñol – a 200 meter tall granite boulder, that offers panoramic views of the lake countryside.

For years, Medellin was marred by Cartel-related violence. But that’s a thing of the past. Today, it’s one of the most progressive cities in South America. In fact, Medellin was named the most innovative city in the world by the Urban Land Institute in 2013. Book your hotel in the popular Poblado District, the thriving center of Medellin, filled with cafe’s, restaurants, boutiques, and museums.

Once you’ve dropped off your bags, get acquainted with the city on a free walking tour. Or you can explore on your own. Right in El Poblado, there’s the unusual El Castillo Museum, an early 20th century building styled after the lavish castles of the Loire Valley in France. While the Museum of Antioquia is a beautiful former city hall turned art museum. The Museum of Antioquia faces the Plaza Botero, which is home to 23 different statues and sculptures made by famous Colombian artist and sculptor Fernando Botero.

Medellin hasn’t forgotten about its past, and the Casa de la Memoria is a museum and memorial for all of the lives lost due to the violence in Medellin. You can now even visit Comuna 13, once perhaps the most dangerous place on the planet, which is filled with some amazing street art that stems from the brutal police raids of the past. While you can go by yourself, we’d recommend joining a tour with Comuna 13 Graffiti Tour, Zippy Tour, or Medellín City Tours.

There are also a number of fabulous parks, with the Parque Arvi alone being reason enough to visit Medellin. Located in the mountains near the city, a gondola will take you right from the subway to the park’s entrance. Covering 16,000 hectares, some of the trails here were first made of over 1,500 years ago!

Book a car from Bogota to Medellin

After taking in the sights of South America’s most forward-looking city, head from Medellin to Cali for some footloose fun. 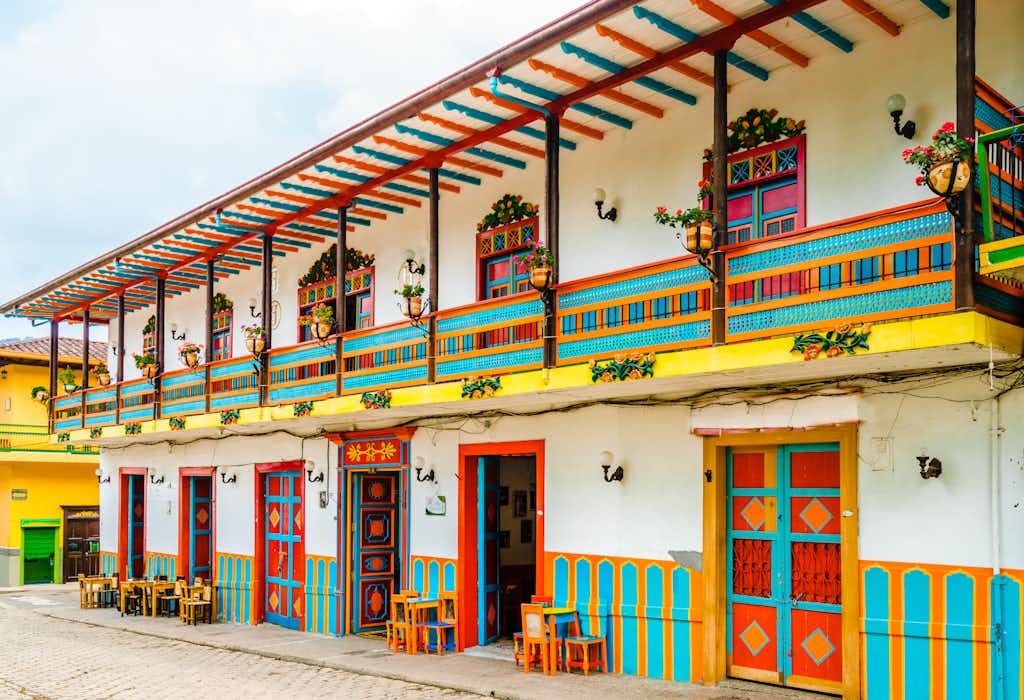 Jardin, literally “garden” in English, really lives up to its name. Surrounded by lush jungle and backed by  mountains, it’s an explosion of traditional Colombian color. Stop for 90 minutes to wander among the brightly painted buildings and relax with a cup of ‘tinto’, a heavily sweetened Colombian coffee, in front of the Neo-Gothic Basilica of the Immaculate. Or get a different perspective riding above the town in a pulley-operated wooden gondola. If you’re lucky maybe you’ll spot the ‘Andean cock-of-the-rock’, or one of the many other tropical bird species that flit through town.

Cali (short for Santiago de Cali) is famous as the “Rumba Capital of Colombia” and, more impressively, the “Salsa Capital of the World”. So it should come as no surprise that Cali is absolutely packed with energy and buzzing with culture.

There are some great museums, like the The La Tertulia Museum, the Calima Gold Museum, and the La Merced Archeological Museum, where you can learn about Colombian history. And the tree-filled Plaza Caicedo is a great place to just hang out. While you’re downtown, you should also pay a visit the the elegant La Ermita church. Inspired by the Cologne Cathedral, it’s a whimsical take on Neo-Gothic architecture.

But Cali’s real draw is its intoxicating atmosphere. Head down to the Juanchito neighborhood, where the streets are lined with dance clubs playing contagious beats, and let the rhythm flow through you. Dance the day and night away, taking breaks to sample the city’s colorful cuisine. Or, if you have two left feet, there’s usually salsa and rhumba performances you can watch. And you can always improve your footwork by joining a salsa class

Book a car from Medellin to Cali

Once you’ve had your fill of the Salsa capital of the world, head back from Cali to Bogota. 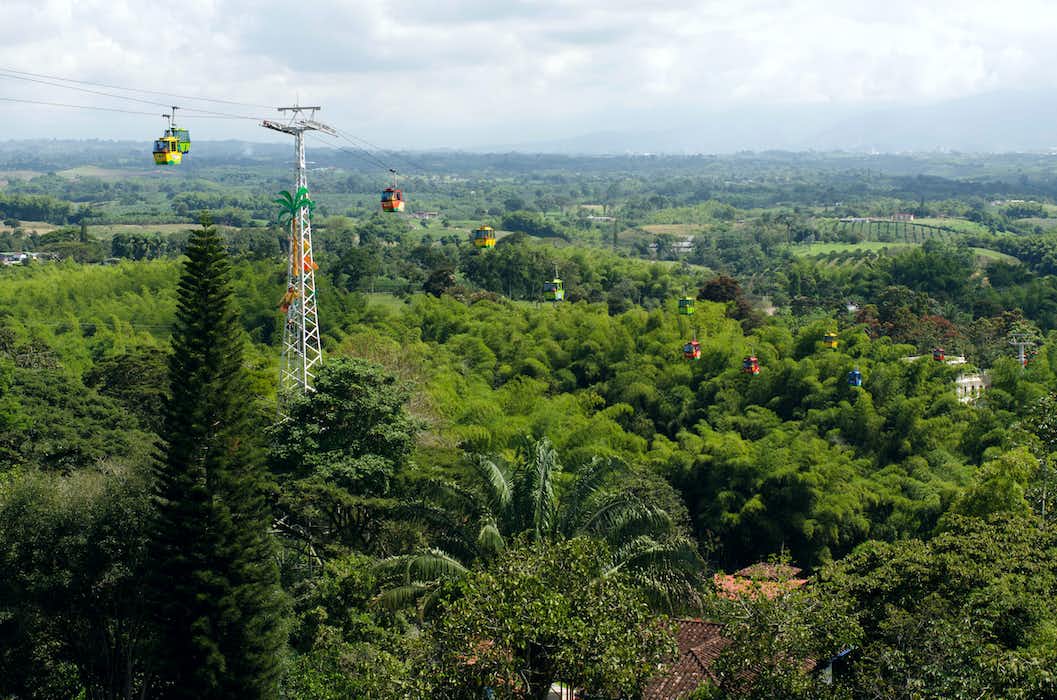 Colombia has a reputation as being a world-class coffee producer, and with a 90-minute stop at the National Coffee Park, you’ll learn about the bean’s history and the cultural significance of coffee. Pay a visit to the interactive museum for coffee, and for an adrenaline rush, there’s also a 27 ride theme park, roller coaster and all!

As one of the largest cities in South America, there’s a lot to see and do in Bogota, so we’ll leave you with some tips, just in case you missed anything when you first arrived.

Sitting at an elevation of 2,625m, Bogota is the 3rd highest capital city in the world. Any visit should include a trip up Cerro de Monserrate, the mountain overlooking the downtown (don’t worry, there’s a cable car and funicular to get you to the top). Along with a white church, it offers a great panorama of the city, that’s especially nice at sunrise or sunset.

You don’t want to miss La Candelaria, Bogota’s oldest neighborhood. Start at Bolivar Plaza for the colonial-era cathedral before exploring the narrow streets. It’s worth visiting museums like the Museo del Oro, with pre-Columbian artifacts, and Museo Botero, showing international art in a colonial mansion. And be sure to walk down Calle del Embudo for some epic street art and bright, bold colored buildings!

Book a car from Cali to Bogota

If you’re looking to experience even more Colombian culture, we highly recommend adding a trip from Bogota to Barichara. This colonial town is touted as “The Most Beautiful in Colombia”, and offers the chance to experience local traditions. Plus you’ll get to add another two great stops along the way! 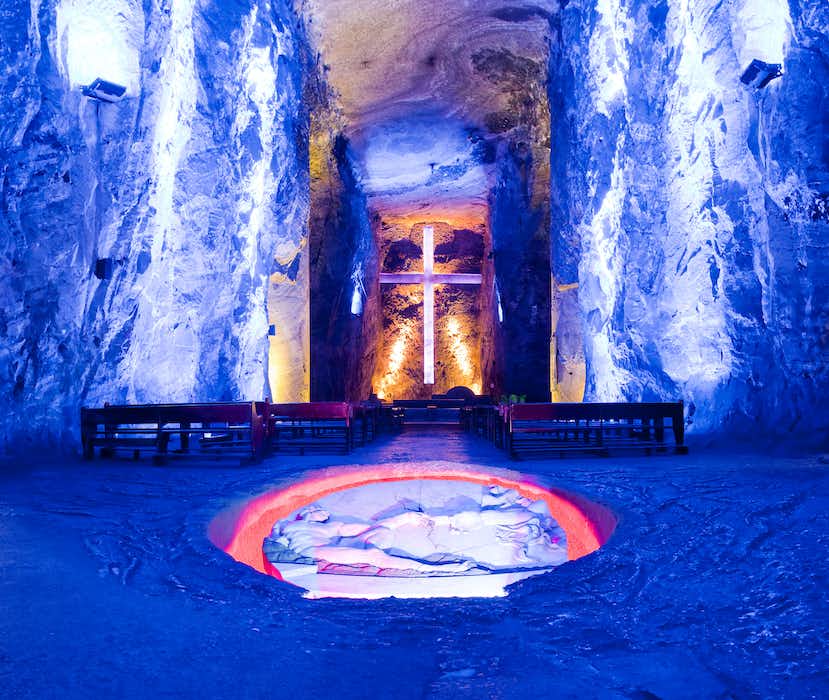 The Salt Cathedral of Zipaquirá is easily one of the most unique sights in the whole of Colombia. The original cathedral was built 600 feet underground by miners in the 1950s in a halite mine that’s been in use since the 5th century BC! This eventually was replaced by a newer and larger cathedral 200 feet further underground. Stop for an hour to admire the unique churches, learn about mining history in the museum, and buy some souvenirs in the market.

This charming colonial town packs a lot into a tiny package. Head to the 14,000-square-meter plaza, one of the largest in South America, to take in the white-washed buildings and picturesque church backed by rolling hills. If you haven’t visited an ancient archaeological site, El Infiernito on the outskirts of town was a Muisca astronomical observatory and religious site that the Spanish named “Little Hell” because of all the phallic statues. For even more weirdness on your 60-minute visit, check out the Casa Terracota, an unusual, two story home built entirely from clay (there aren’t even supports), that the owner likes to call the largest piece of pottery in the world. 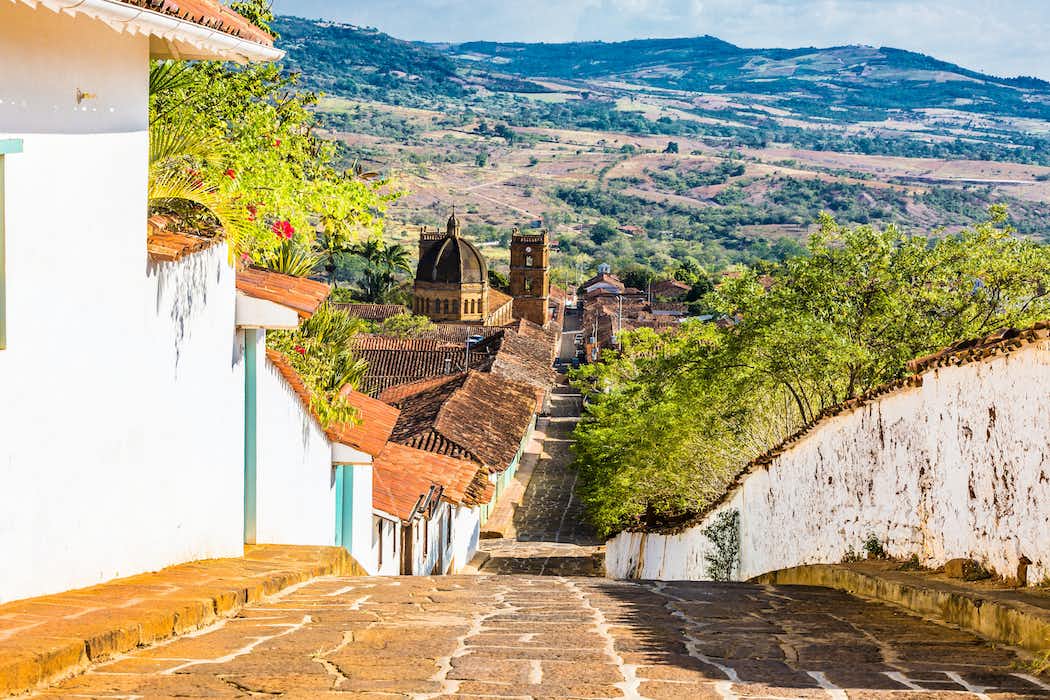 Barichara is known as “Colombia’s Most Beautiful Village”, so we’d say it’s well worth adding to your Colombian itinerary. It began as a small chapel where the Virgin Mary is said to have appeared on a limestone rock in 1702. Over the next 100 years it expanded as more and more houses were constructed.

The 18th century cathedral is the town’s standout monument, both for its size, and its warm stonework, which contrasts with the white houses that make up the rest of the town. Inside, you’ll find colorful tiled floors, a remarkable wood and bamboo ceiling, and opulent gilded altar piece.

While the cathedral is the main monument, it’s not the reason you visit Barichara. You come to explore the cobbled streets, lined with white-washed houses topped with red-tile roofs. The whole town looks like it’s been lost in time and offers endless photo ops.

The other reason is the famous local cuisine. Sun-dried steak and grilled goat are both staples, but Barichara’s specialty is meat cooked in salsa de hormigas colunas (sauce of big-bottom ants). While you’re walking around town, you can even pick up some fresh fried or roasted ants (they get compared to popcorn and peanuts)!

Book a car from Bogota to Barichara

Ready for your tour of the Colombian Classic Circuit?