Most people come to Greece for two reasons: the sparkling Mediterranean waters, and the legendary history. If you’re a history lover, you probably want to see as many relics of ancient Greece as possible.  And honestly, even if you’re in the sun and sea camp, why wouldn’t you want to see where the Olympic games began, or the legendary stronghold of Agamemnon? That’s why we’ve put together this super easy Classical Greece tour from Athens. In just a few days, you can experience thousands of years of history! 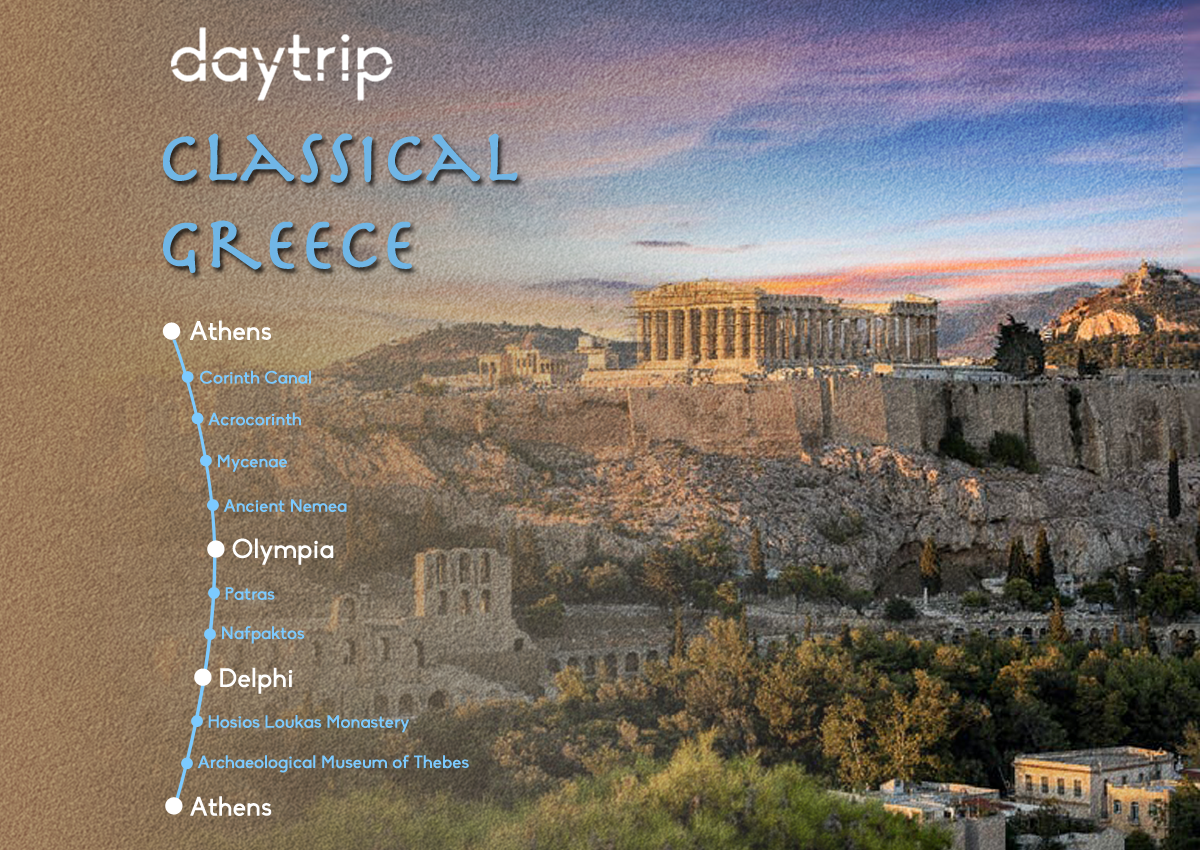 There’s entire guide books tackling what to see and do in Athens, so we won’t waste time here. After all, this post is about visiting places outside the capital. So when you’re ready to set out, head from Athens to Olympia for the first leg of your Classical Greece tour.

Why would a canal made in the late 19th century be on a Classical Greece tour? Well, this 4-mile-long waterway was first devised in the 7th century BC! So take 30 minutes to appreciate this unique but cursed waterway that Caesar, Caligula, Nero all planned to build before their untimely demises. First built by the ancient Greeks, this massive hilltop complex was used by the Romans, Byzantines, Franks, Turks, and Venetians before finally returning to Greek hands. Commanding an entire hilltop, Acrocorinth is considered the most impressive acropolis in all of Greece. Spend 75 minutes exploring the castle, where you’ll find everything from Turkish baths to a temple to Aphrodite. Plus the views are spectacular. 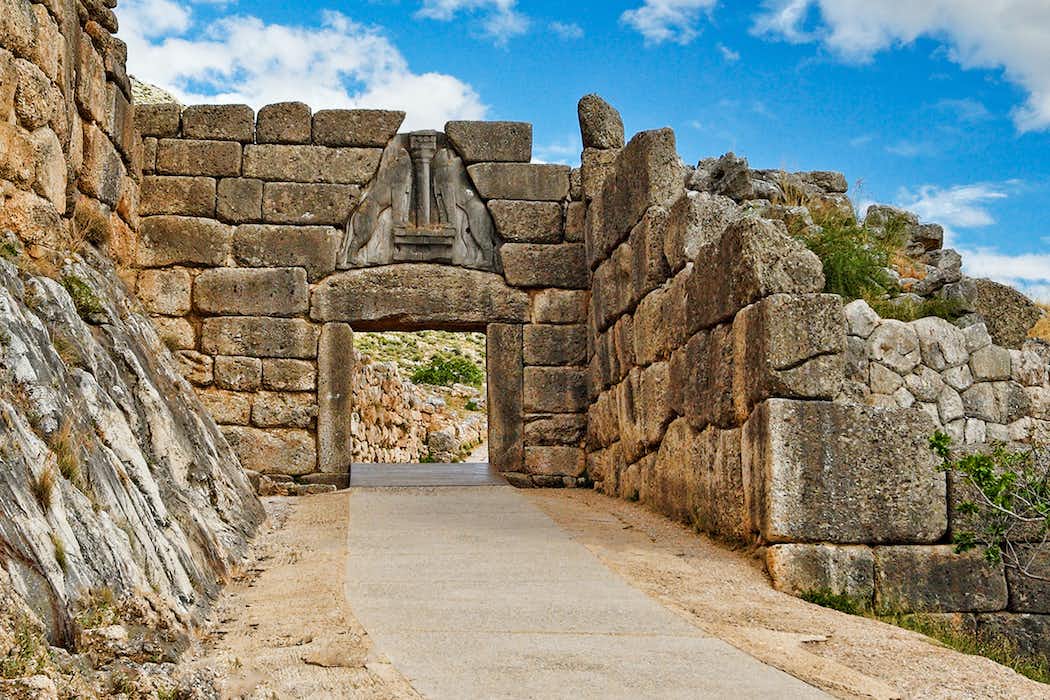 If you’ve read Homer’s Iliad, you know about mighty Agamemnon’s magnificent fortress, Mycenae. Homer described the structure’s grandeur, and according to archaeological findings, Homer was right. Explore the UNESCO-listed ruins of the richest Late Bronze Age city for 75 minutes for a taste of the culture that spawned Classical Greece. Highlights include the mighty Lion’s Gate and the  Treasure of Atreus, the most impressive and well-preserved of all Mycenaean tombs. The stone lintel above the doorway weighs 120 tons, making it the largest in the world.

Ancient Nemea isn’t quite a household name, but it’s one of the most important archeological sites in Greece. In mythology, Heracles came here to slay the mythical Nemean lion that was terrorising the area. Beginning in the 6th century BC, it also hosted the Nemean Games (one of the four Panhellenic Games that included the Olympics). Take two hours to check out the temple to Zeus, the ancient stadium that hosted the Nemean games, a bathhouse, and a hostelry. Before exploring the site, we’d recommend stopping by the museum explaining Nemea’s rich history and its importance in Greek mythology.

After a day filled with history, you’ve arrived in the birthplace of the Olympics! Ancient Olympia attracted Greeks from around the country for two reasons. First, it was a major Panhellenic sanctuary, with temples honoring multiple gods. And, between the 8th century BC to the 4th century AD, hosted the Olympic Games every four years.

In its prime there were over 70 temples here, many of which still stand in various states of preservation. The most famous was the Temple of Zeus, which, when it was built 2,500 years ago, was the pinnacle of Doric architecture. Inside, 43-foot-tall gold and ivory statue of Zeus was one of Classical Greece’s most revered artistic works and one of the 7 Wonders of the Ancient World. This has long since been destroyed, but it’s amazing to think about!

Roman Emperor Theodosius II ordered Olympia’s destruction in AD 420, and subsequent earthquakes helped topple what was left. But there’s still enough to get an idea of its grandeur and enjoy one of the best hands-on antiquity experiences in Greece. Head to the 2,500-year-old Olympic Stadium to take your place on the starting line of the original Olympics. Visit the 7th-century-BC Temple of Hera, the site’s oldest temple, where they still light the modern Olympic flame. Then there’s the remains of everything from Emperor Nero’s lavish villa to a wrestling school.

Before you even begin exploring the grounds, visit the Archaeological Museum to see the many artifacts unearthed here and get a better grasp on the site’s history. The separate Olympic museum covers the history of the games, and is filled with Olympics-related relics ranging from statues to vases.

Book a car from Athens to Olympia

After igniting your passion for Classical Greece, travel from Olympia to Delphi for the divine archaeological site. 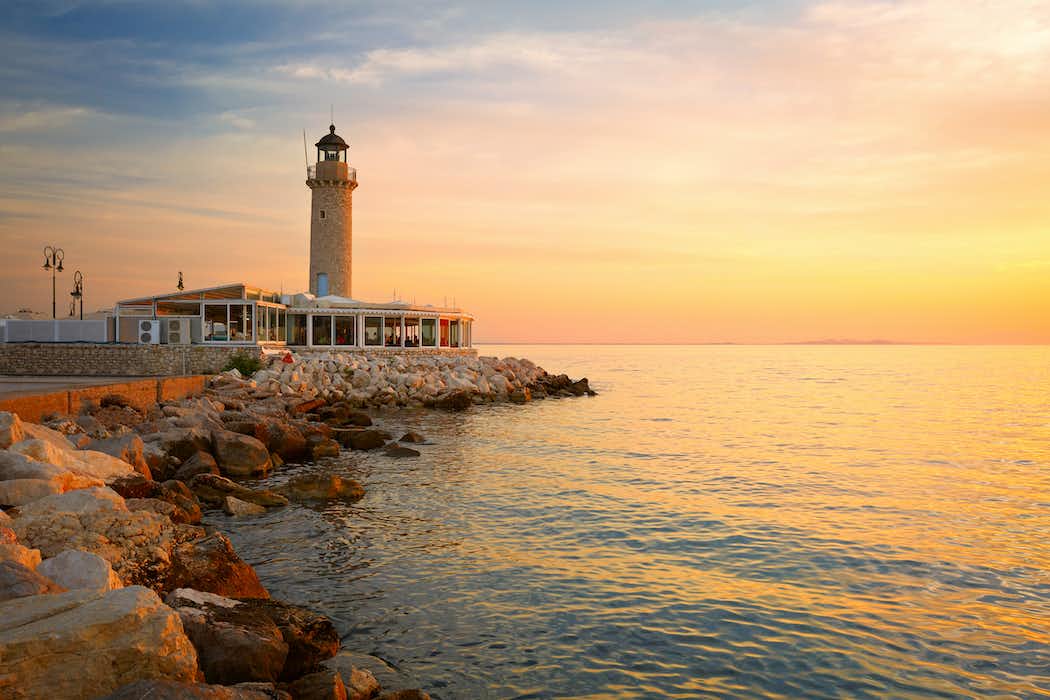 Patras has been settled since 3000 BC, and stood as the cosmopolitan capital of western Greece for thousands of years. In 90 minutes, you’ll be able to walk from charming cobbled streets to a medieval castle, the remains of a Roman Odeum (think small amphitheater), and the Orthodox church of Saint Andrew (who was crucified here). But before you go, take in the view of the port from the Patras lighthouse. 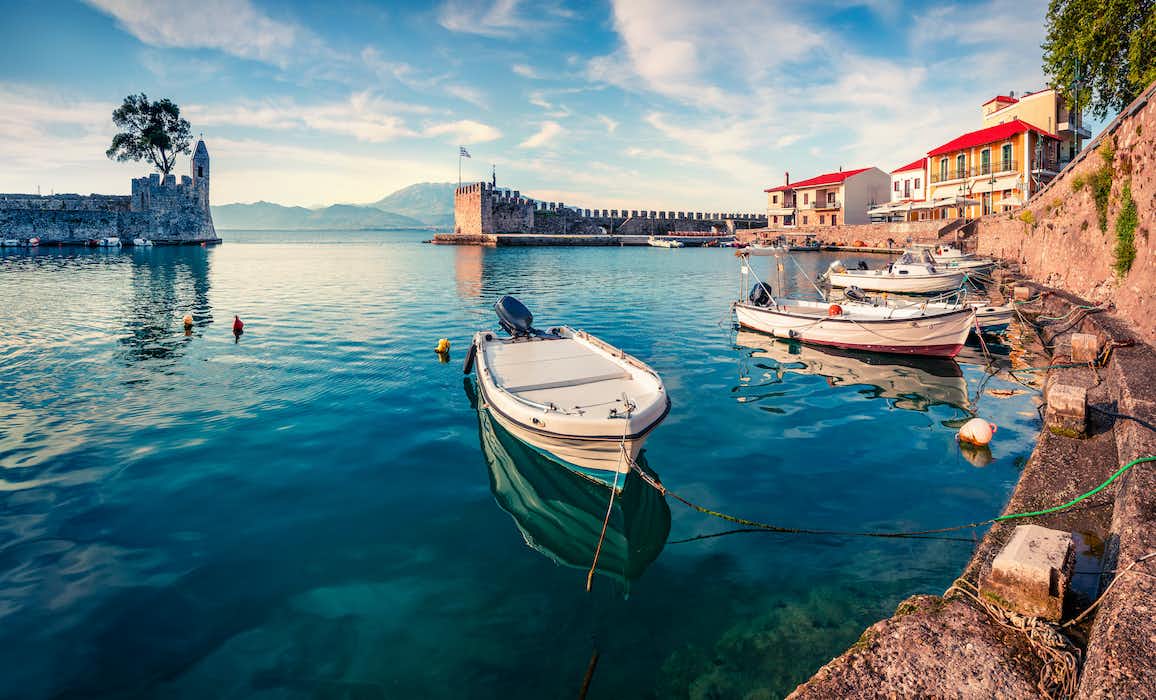 Controlling access to the bay of Corinth, Nafpaktos is easily the most beautiful military stronghold in Greece. Said to be the site where Heracles’ descendants built a fleet to travel to Peloponnesus, it was a strategic military position from Classical Antiquity through the 17th century. Wander the cobbled streets for an hour, relax by the fortified port, or explore the mighty Venetian castle.

To the ancient Greeks, Delphi (from delphis, womb) the center of the world. A place where man could communicate directly with the gods. For centuries, people would come to consult with the all-seeing Oracle of Delphi at the Temple of Apollo, who is said to have predicted everything from the Trojan War to the founding of the Greek colonies. Unfortunately, as the power of the Greeks dwindled, Delphi lost importance, ultimately falling into ruin with the rise of Christianity.

Today, this cluster of ancient Greek monuments nestled on the slops of Mount Parnassus rivals the Acropolis in Athens for its beauty and archaeological importance. You’ll of course want to visit the Temple of Apollo where the Oracle of Delphi communed with the gods. And the theatre, which while silent, still puts on a show with the spectacular views. Theres also a gymnasium and stadium, Castalian spring, and many other vestiges from the Greek, Roman, and early Christian eras.

Book a car from Olympia to Delphi

After taking in the divine views and history, it’s time to return from Delphi to Athens.

Okay, so it’s not from the Classical period, but as a UNESCO World Heritage Site and one of the most impressive Byzantine churches in the Mediterranean, you’d be remiss to miss spending an hour at the Hosios and Loukas Monastery. Founded in the early 10th century by hermits Venerable and St. Luke (Hosios and Loukas in Greek), the church is the best representation of Byzantine architecture anywhere. The architecture and decor are both stunning, and the crypt is covered with gold-backed frescoes all painted in 1048. 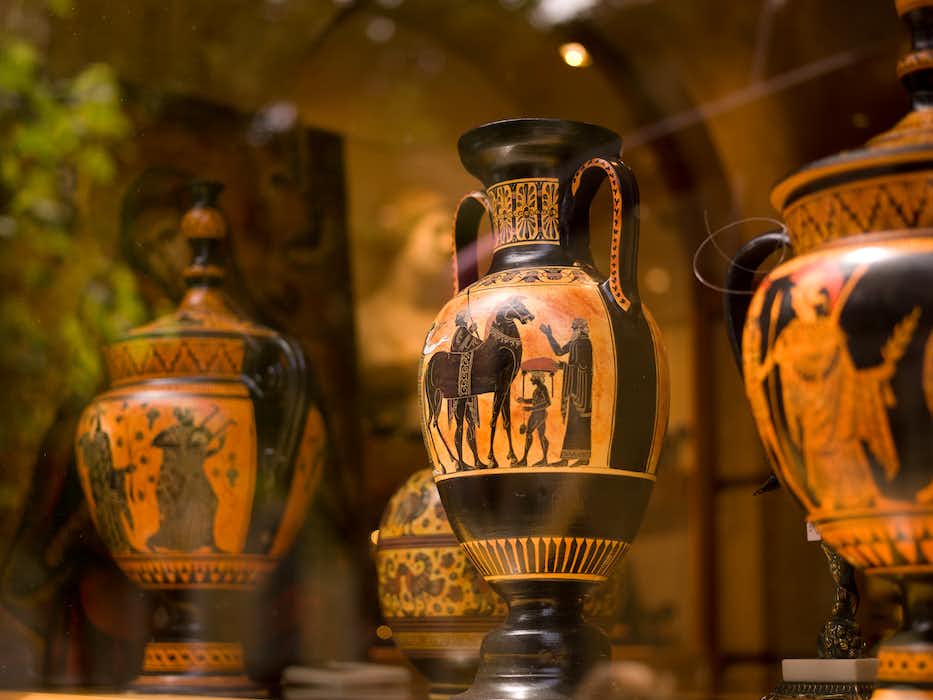 Thebes is one of the best known ancient Greek cities. It was the traditional enemy of Athens and the birthplace of Dionysius, Heracles, Oedipus and a few other historical and mythological figures. There are archaeological sites scattered throughout the city, including Cadmea, the Mycean period citadel of ancient Thebes. But honestly, these aren’t in great shape. So instead, head to the Archaeological Museum of Thebes for 90 minutes. It’s possibly the best museum in all of Greece, which traces the region’s history through a collection of artifacts from the Paleolithic to the Post Byzantine periods.

Back in Athens you can visit (or revisit) the many historic sites that dot the city. The fortified Acropolis, crowned by the mighty Parthenon is perhaps the most impressive ancient Greek site in the country. Most people don’t know that the nearby Erechtheion was even more important to ancient Athenians, with its ties to Athena and Poseidon and mythical kings. In fact, the sacred Panathenaic festival terminated here, not at the Parthenon. Just a couple hundred meters down the hill from the Parthenon, the Acropolis museum showcases basically every artifact unearthed on the hill, from the Bronze Age through the Byzantines.

If the Acropolis was the soul of ancient Athens, the Agora was the city’s beating heart. The market wasn’t just a place where goods from around Ancient Greece were traded. It was also the city’s meeting grounds for everyone from common citizens to famous philosophers congregated. Standing where Plato and Socrates once espoused their ideas is an unforgettable experience for any history nerd. Much of the agora’s action took place in stoas (covered porticos), and the Stoa of Attalos has been rebuilt as the Agora Museum.

And these are just the most famous sites. Throughout Athens you’ll find other reminders of Ancient Greece, ranging from roadside ruins to the still-in-use stadium.

Book a car from Delphi to Athens

If you love history but aren’t planning on visiting Greece, you can actually see the best-preserved Greek temples in the world on a tour of Southern Italy!