Despite covering only 728 sq km (about 280 square miles), the island city-state of Singapore is jam-packed with things to do. It’s a city (state, country) of contrasts, where traditional tribal villages are just a short ferry ride from gleaming modern high-rises. Street hawkers sell Michelin Star food, and verdant parks are punctuated by glowing neon trees. Even the airport is an attraction in itself. There’s so much to experience in this modern metropolis that it can be a bit overwhelming. To make it easier to plan your visit, we’ve put together this list of the best things to do in Singapore! While you’re exploring, just remember to follow their rules!

The Gardens by the Bay

Probably Singapore’s most iconic landmark, the Gardens by the Bay are a major reason Singapore considers itself a “City in a Garden”. The waterfront green spaces showcase some of the best tropical horticulture and garden artistry in the world, but it’s the indoor conservatories that make the Gardens by the Bay so unique. Under some of the world’s largest greenhouses, you’ll find multi-level gardens replicating environments like a flower-filled Mediterranean climate and Latin American Cloud Forest. Then there are the 18 “Supertrees”, which are covered in exotic plants, and harness a number of environmental technologies, ranging from solar power to water collection. We’d recommend visiting around sunset so you can catch the sun sinking below the skyline and see the Supertree “Garden Rhapsody” light and music show between 7:45pm and 8:45pm. It’s easily one of the best things to see in Singapore! 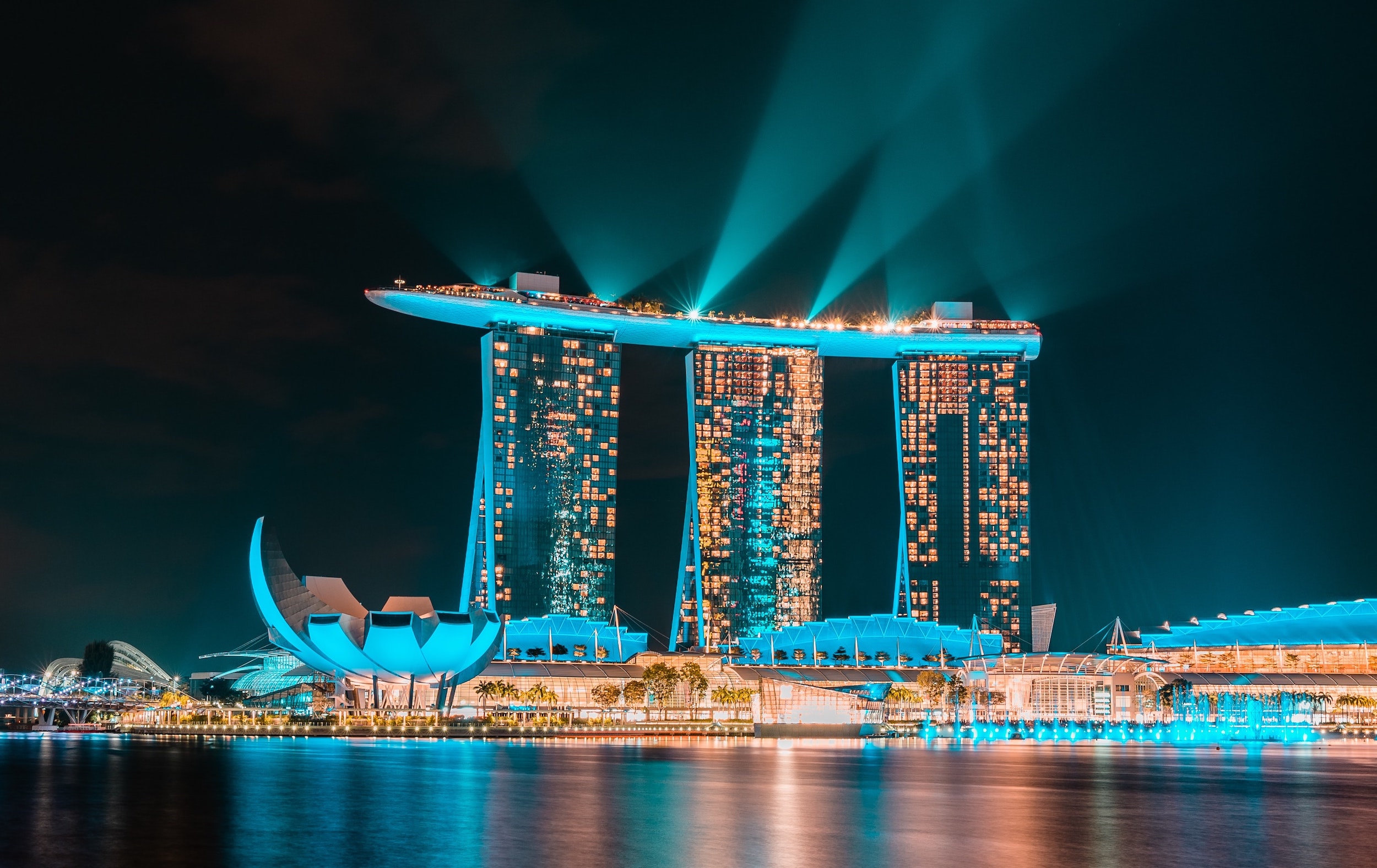 Along with the Gardens by the Bay, the Marina Bay Sands resort is Singapore’s other most-recognizable landmark. The luxury hotel, mall, casino, and convention center is spread across three towers and topped with the world’s largest public cantilevered platform. A walk through the SkyPark on top of the building should be on every visitor’s to-do, for both the unique setting and the fabulous panorama of the city. If you have the cash to splash, you can dine at one of the two Michelin-starred restaurants. And book a room at the hotel so you can splash around in the world’s largest rooftop Infinity Pool (it’s off limits to non-guests).

The future-forward ArtScience Museum is technically part of the Marina Bay Sands complex, but so good that it warrants its own entry in our list. Designed by renowned architect Moshe Safdie, the building resembles a half-unfurled lotus flower, and prides itself on the first museum in the world that blends art, science, and culture. The interactive, light-soaked displays in the permanent Future World exhibit explores everything from the changing of the seasons to synchronized bird movements and the vastness of space. The touring temporary exhibits cover everything from pop culture to particle physics (through June 2021 it’s Star Wars) with the same ultramodern bent. 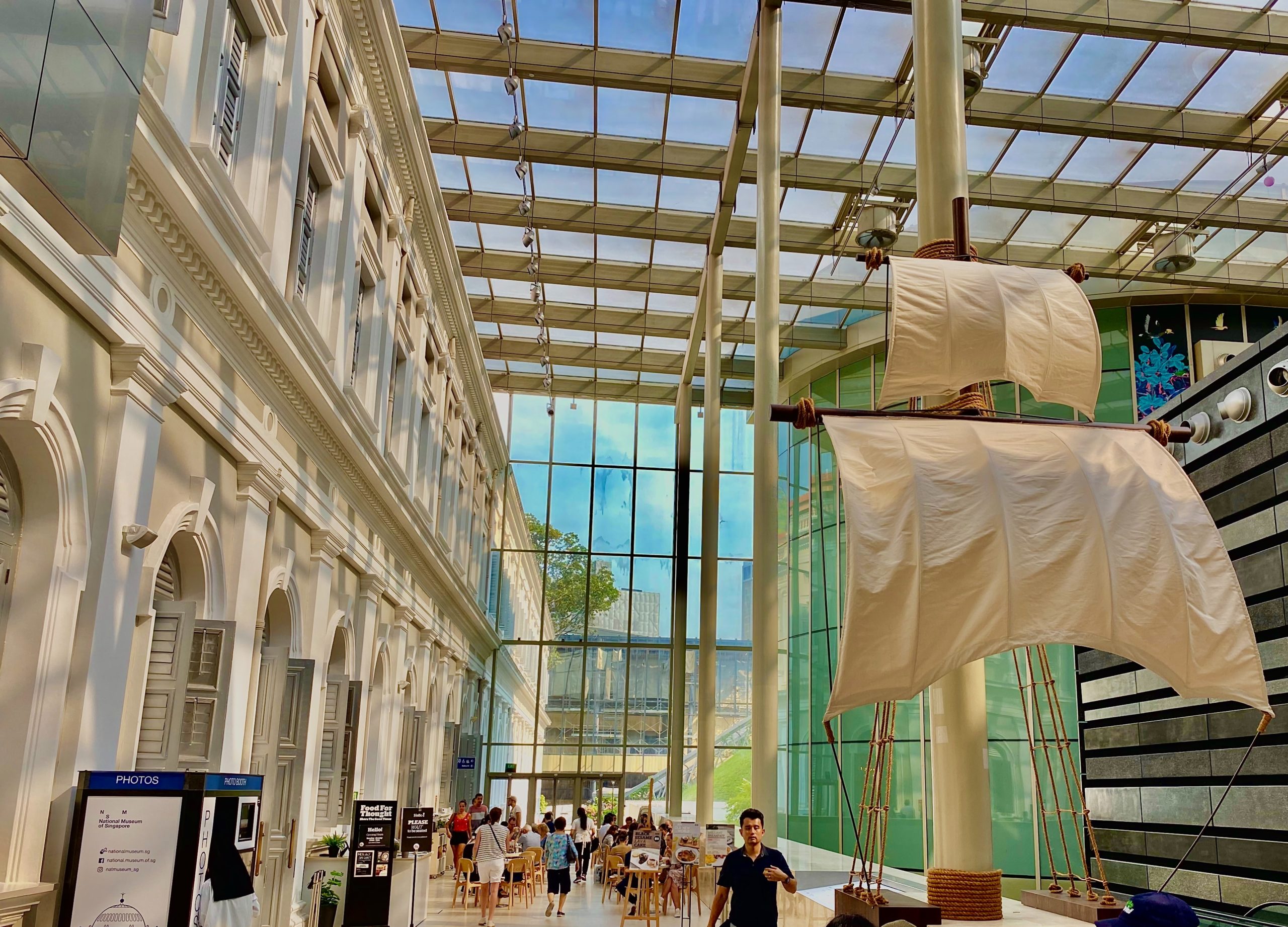 At first glance, the classy neo-Palladian facade of the National Museum of Singapore might conjure images of stuffy rooms crammed with artifacts. But despite being the city’s oldest museum, its interiors have been modernized and filled with immersive exhibits that trace Singapore’s history in a contemporary manner. Oh, and they have an award-winning fine dining restaurant, “Flutes”, serving upscale cruising in the oldest part of the building.

Experience Singapore’s rich heritage in its trifecta of cultural neighborhoods: Chinatown, Little India and Arab Street. In Chinatown, grab a plate of Michelin star-winning chicken rice at Liao Fan Hawker Chan in (it’ll only run you about 3 Singapore dollars) and get a crash course in Buddhism at the ornate Buddha Tooth Relic Temple & Museum. That enormous golden is stupa said to hold a tooth from the Buddha. Then head over to Arab Street for the 19th century architecture and hip watering holes. Over in Little India, follow one of the National Heritage Board’s self-guided walks (or book a walking tour) through the narrow lanes, where the jumble of colors contrasts with the city’s otherwise pristine facade. In each neighborhood you’ll find holy sites and museums, and plenty of irresistible eats.

For a glimpse of what Singapore was like before modernization, take the ferry from Changi Point to Pulau Ubin, a small island in the northeast. This island is home to one of Singapore’s last traditional villages, where people still support themselves through fishing and agriculture. Rent a bike to explore the island, and enjoy your break from cars and skyscrapers. Make a point to visit the German Girl Shrine, a Taoist temple built to honor an unnamed German girl who died while fleeing British forces in 1918. If you don’t have time to make the trip to Pulau Ubin, you can also get a sample of traditional Singapore life at Kampong Lorong Buangkok, the last remaining village cluster on the main Singapore island. Surrounded by new developments, the humble abodes in this patch of forest and humble will transport you back to a simpler time in Singapore’s history. 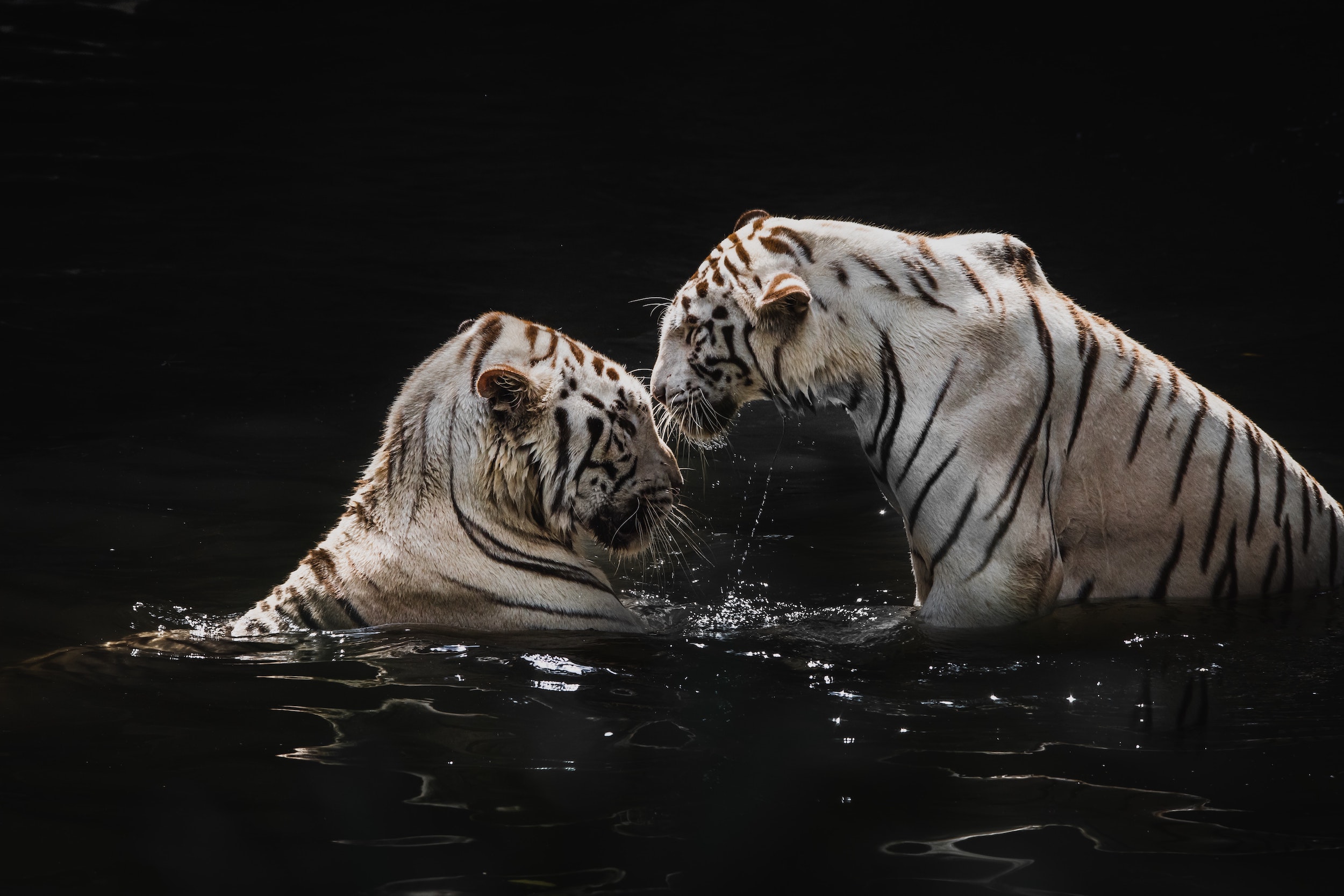 You can tell a lot about a city by the quality of its zoo, and the Singapore Zoo is one of the best in the world. Spread across eleven zones and spanning nearly 70 acres, the 2,800 animals here live in “open” captivity that mimics their natural habitats. There are plenty of opportunities to meet the residents up close, from free-roaming lemurs to feeding elephants and giraffes as well as educational shows and talks. 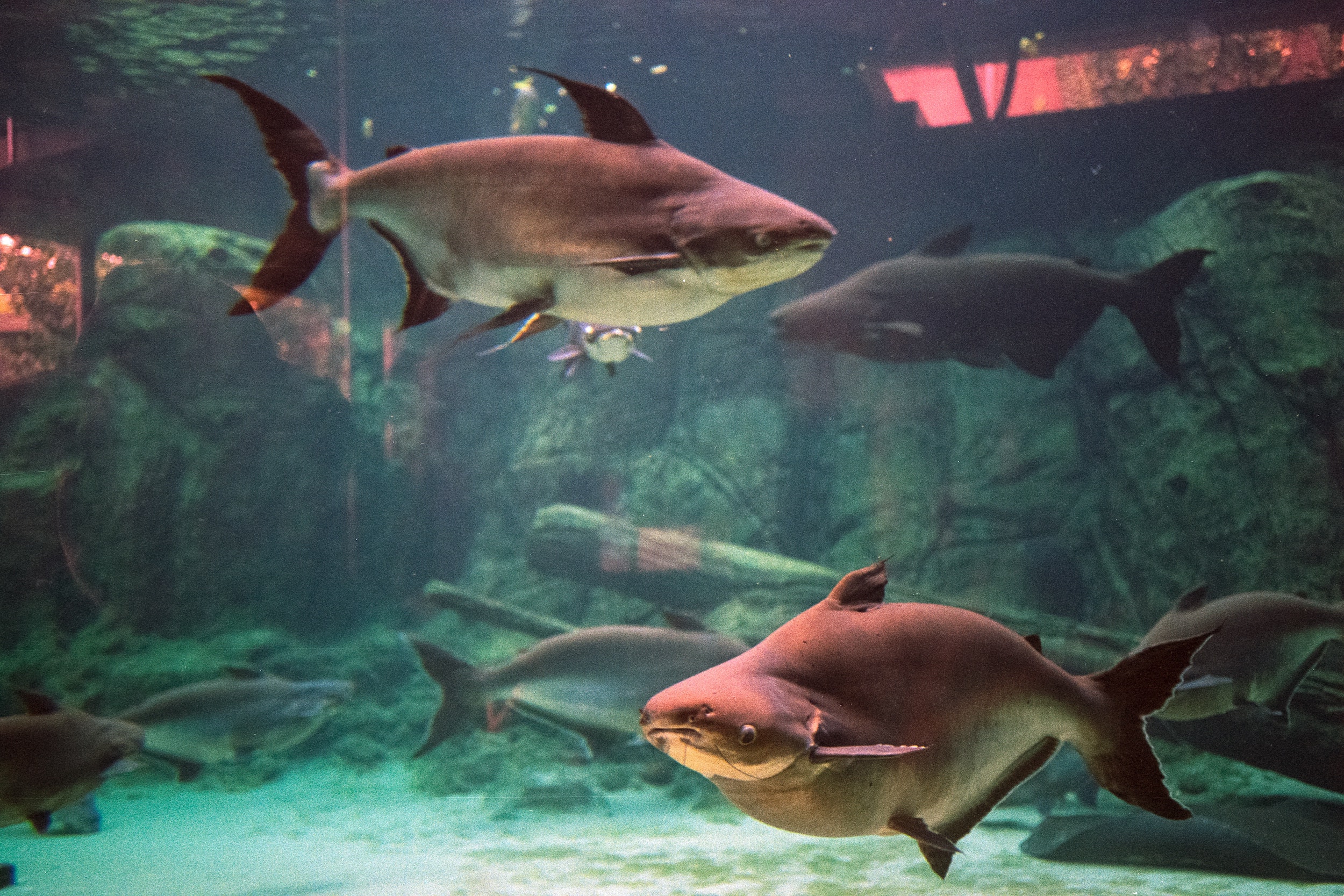 A stone’s throw from the Singapore Zoo, the River Safari immerses you in the world of waterways. Meet over 5000 animals from the greatest rivers in the world including the Amazon and the Nile at the world’s biggest freshwater aquarium. Plus there are terrestrial animals including red pandas, and the giant pandas, Kai Kai and Jia Jia. 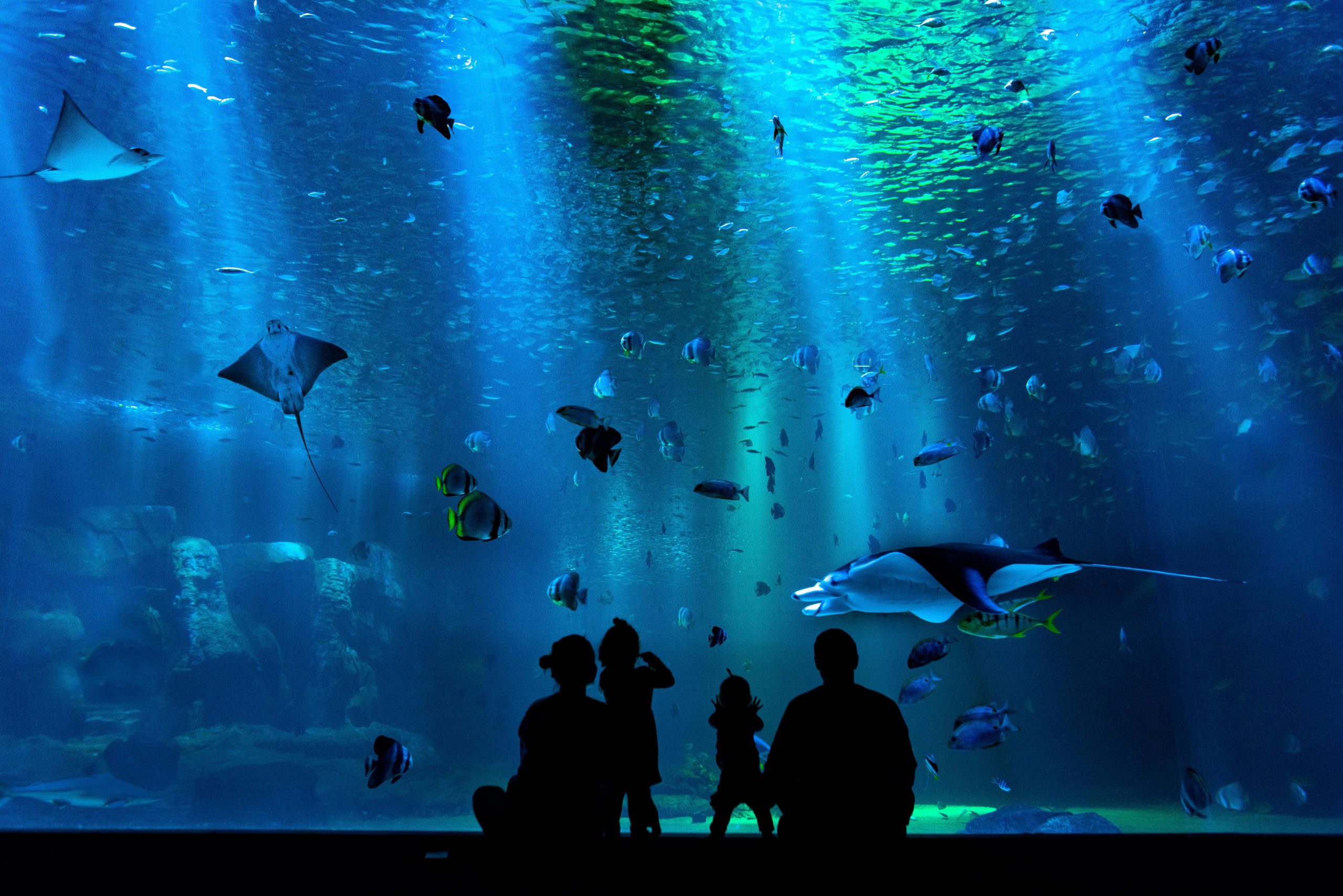 For a dedicated marine experience, the S.E.A Aquarium at Resorts World Sentosa is one of the biggest and best aquariums in the world. Over 100,000 marine animals from 1,000 species swim through 50 different. You’ll see everything from giant octopuses to bottlenose dolphins to the largest collection of manta rays in captivity. The SEA Aquarium also offers a unique dining experience, where you can tuck into fresh Mediterranean-Californian while enjoying a front row seat to the massive undersea habitat at the Ocean Restaurant.

The Coast-to-Coast (C2C) Trail basically bisects Singapore, running from Coney Island in the northeast to Jurong Lake Gardens in the south. The trek brings you to some of Singapore’s best parks and nature reserves, so if you want to get away from the crowds, it’s an amazing outdoor excursion. Of course, it’s also 36km long, so you probably aren’t going to walk it in a day. Instead, break it down into sections, or just hop in wherever is closes to you. Of course, there’s also bike rentals. And being Singapore, there’s a cool AR mobile app to share local biodiversity, sights, and attractions.

If you don’t have time (or energy) to do the full Coast 2 Coast trail, head to MacRitchie Reservoir for the Treetop Walk. From ground level, you’ll work your way through the jungle to the canopy, traversing a 250m-long (820ft) bridge that’s 25m (82ft) above the forest floor. It you’re lucky, you might get to see the huge tribe of monkeys that live here. The whole walk talks a couple hours, so be sure to bring water! 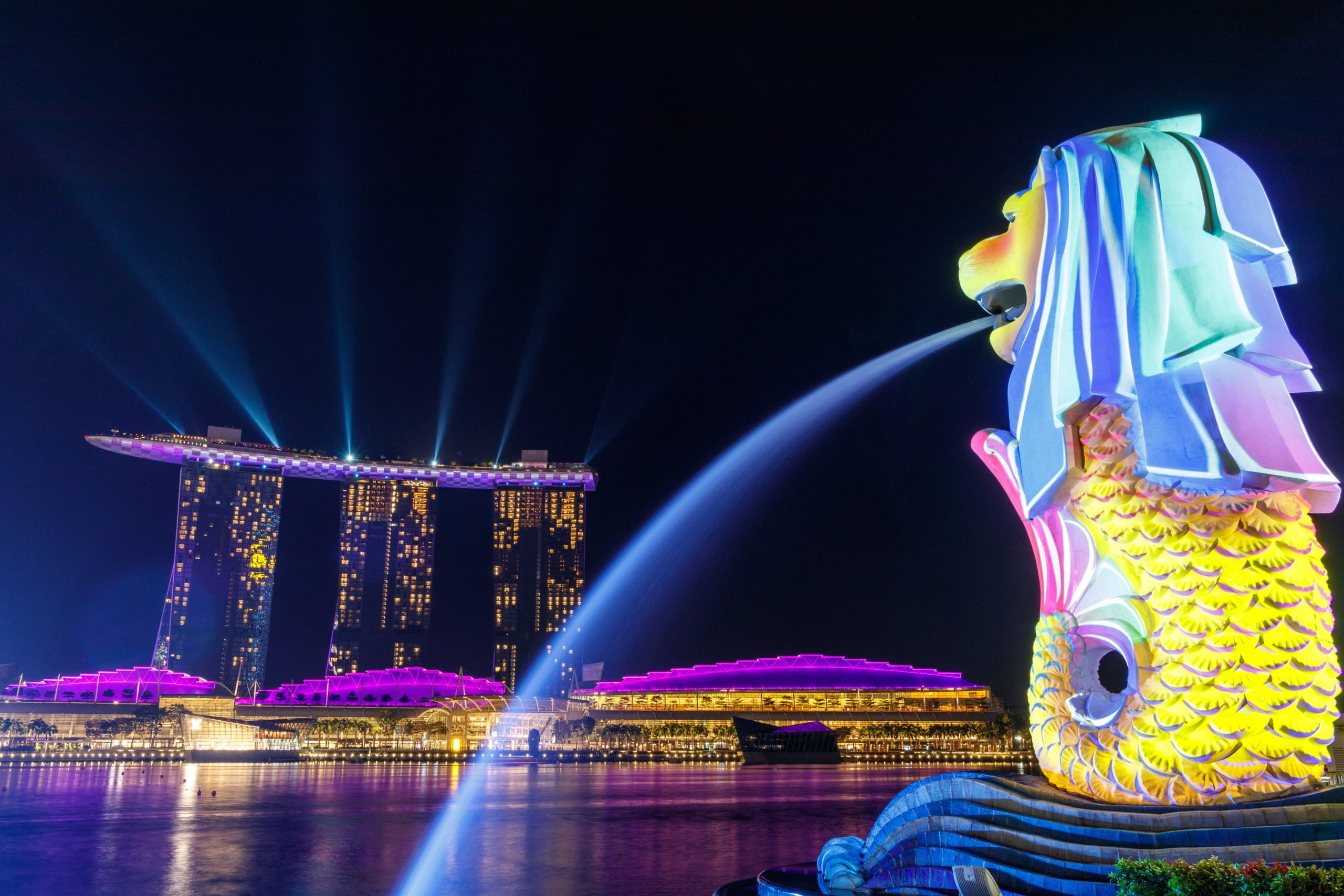 Standing 9 meters tall, the mythical Merlion, a creature with the head of a lion and body of a fish spouting water out of its mouth, is Singapore’s mascot and an obligatory photo op. Along with the huge statue, the park offers a perfect vantage to watch the sunset and sunrise behind the Marina Bay Sands.

The airport, really? Well, Changi isn’t your typical airport. The 1.3-billion-dollar Changi Jewel entertainment complex is like a glass-shrouded tropical resort. Explore indoor “hiking” trails, get lost in a Mirror Maze, watch butterflies flit about their garden sanctuary, relax in the rooftop pool, and ride between levels on tube slides. The pièce de résistance is the “Rain Vortex”, the world’s largest indoor waterfall, which puts on a dazzling light-and-sound show. Then there’s free movies in the 24-hour theaters, luxury shopping and fine dining (two Michelin Star chefs have outposts here). Sounds like a good reason to arrive more than a couple hours early for your flight? Lots of people give themselves a full day just for the airport, even if they’re just transferring! In fact, the Jewel is open to the public, so you can visit even if you’re coming from Kuala Lumpur to Singapore by car!