Stretching for 30 miles, the Amalfi Coast is listed as a UNESCO World Heritage Site for its outstanding natural beauty and rich history dating back to the Middle Ages. While the Amalfi Coast is known for its colorful villages and dramatic natural landscape, there’s more than meets the eye. Read on for 10 of the best things to do in the Amalfi Coast.

Visit Villa Rufolo and its Gardens

No matter where you decide to stay on the Amalfi Coast, a trip to Ravello to see its UNESCO-listed villas should be on your Amalfi Coast itinerary. Built in the 13th century, the Villa Rufolo was a display of decadence that earned its owner the scorn of Boccaccio in The Decameron. Several centuries later, the villa was restored, and a series of cascading gardens created, combining panoramic views, vibrant colors, and historic architecture. In fact, Richard Wagner was so moved by their beauty that he modeled the garden of Klingsor from his opera Parsifal on them. Today, the villa and its gardens are not only one of the most breathtaking sights on the Amalfi Coast, they also set a stunning stage for one of Italy’s finest music festivals.

Then there’s the 11th century Villa Cimbrone. In the early 20th century, Lord Grimthorpe remodeled the villa using salvaged architectural elements from other parts of Italy. He also created a rolling garden, with tree-lined avenues, rose gardens, and wisteria-laden trellises, culminating in the Belvedere. Hugging a sheer cliff face, Gore Vidal described this marble-bust-lined viewpoint as the most beautiful place on the planet.

Walk the Path of the Gods 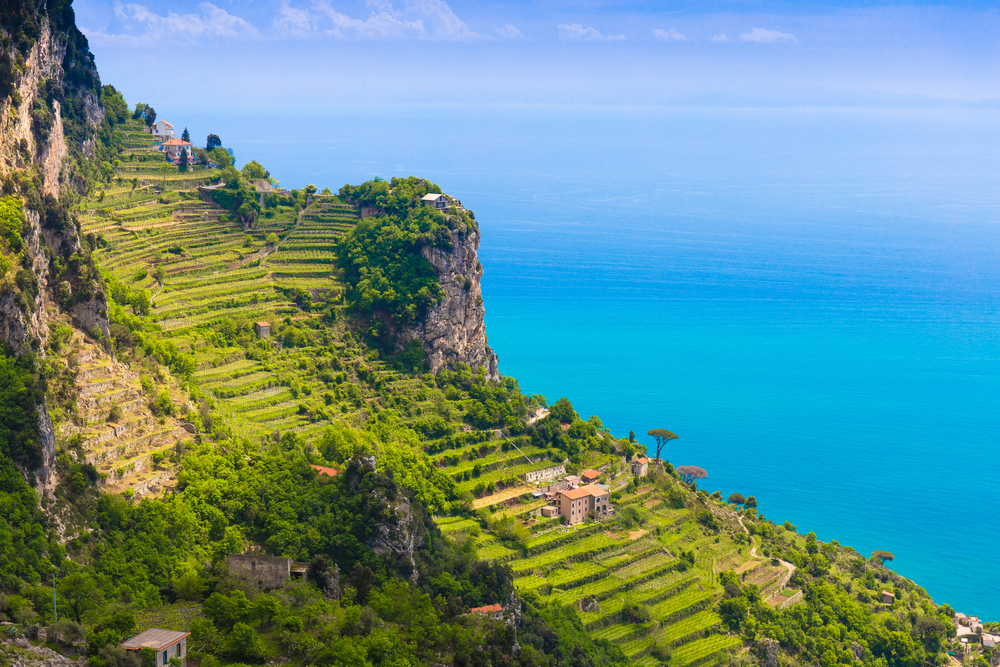 For centuries, the town’s on the Amalfi Coast were only connected by a narrow path that wound its way up and through the mountains. The 5.5 kilometer Path of the Gods gives a sample of this historic hiking route, snaking along sheer cliffs, overlooking the Amalfi Coast’s dramatic landscape and its terraced settlements, with the boundless blue sea beyond. If you’re up for it, the hike is undoubtedly one of the most amazing walks in Europe. Plan to walk from Bomerano towards Positano for maximum effect.

Volcanic soil and a warm climate make the Amalfi Coast the perfect place to cultivate lemons, and the region even has its own varieties – the football-shaped sfusato sorrentino, grown only in Sorrento, and the knob-ended sfusato amalfitano. Of the many uses the locals have for lemons, limoncello is the most celebrated. This sweet, tangy digestif made from lemon zest is the second most popular liqueur in Italy after Campari, and an integral part of Amalfi culture. Nearly every town (and individual) makes their own, and every market and roadside stall will have some for sale. You can even join tours with limoncello producers to learn about the drink, and have a sample yourself.

A post shared by Positano Food And Drinks (@positanofoodrinks)

For such a small region, the Amalfi Coast cuisine is stupendously varied, utilizing fresh seafood, zesty lemons, creamy cheeses, seasonal produce, and of course, pasta. Scialatelli, a local variation of tagliatelle usually served with fresh seafood can be found in any traditional restaurant on the coast, while ndunderi, which is recognized by UNESCO as one of the oldest pastas in the world, is native to the little village of Minori. The coast’s famous lemons are a ubiquitous ingredient, making their appearance in everything from shrimp and lemon risotto to flaky pastries filled with lemon cream and lemon sorbet (served in a lemon of course). And every meal should be topped off with local limoncello. For foodies, the Amalfi Coast’s stupendous views just set the stage for a gustatory extravaganza.

Take a Boat to Capri

The precipitous Capri Island has been an escape for the rich and famous since the days of Emperor Augustus, and to this day Villa Jovis is one of the best preserved Roman Ruins in Italy. If you get to the island early enough a quick zip through the famous ‘Blue Grotto’ sea cave might be in order, but a chairlift ride up the rocky slopes of Monte Solaro should be on everyone’s to-do-list. After soaking in the stupendous views, head back down to explore the charming alleys of Anacapri, or if you still haven’t had enough panoramas, head to the botanical Gardens of Augustus, or poetic Villa Lysis. 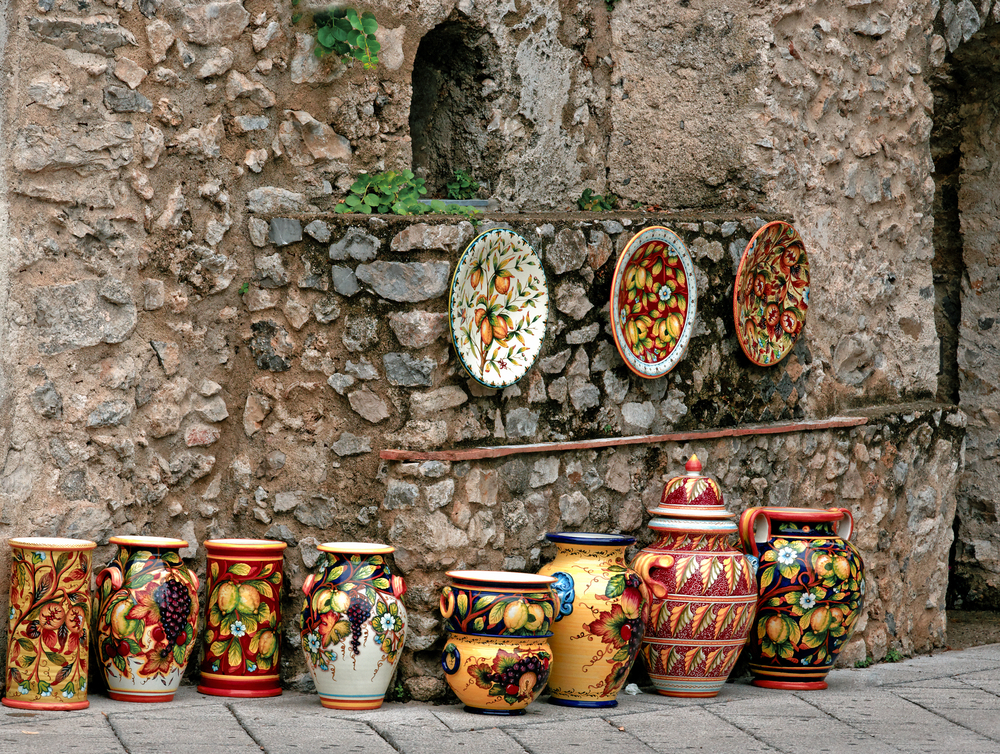 From church domes to streets signs to limoncello bottles, ceramics are ingrained in Amalfi culture. Afterall, the tradition here dates back to the 15th century. Vietri sul Mare is the ceramic capital of the coast, with ceramic decorations on nearly every building, a Gaudi-esque seaside walk, and a ceramics museum. Vietri sul Mare, and many other Amalfi towns, also have plenty of colorful ceramics shops where you can get your own piece of the Amalfi coast to bring home. 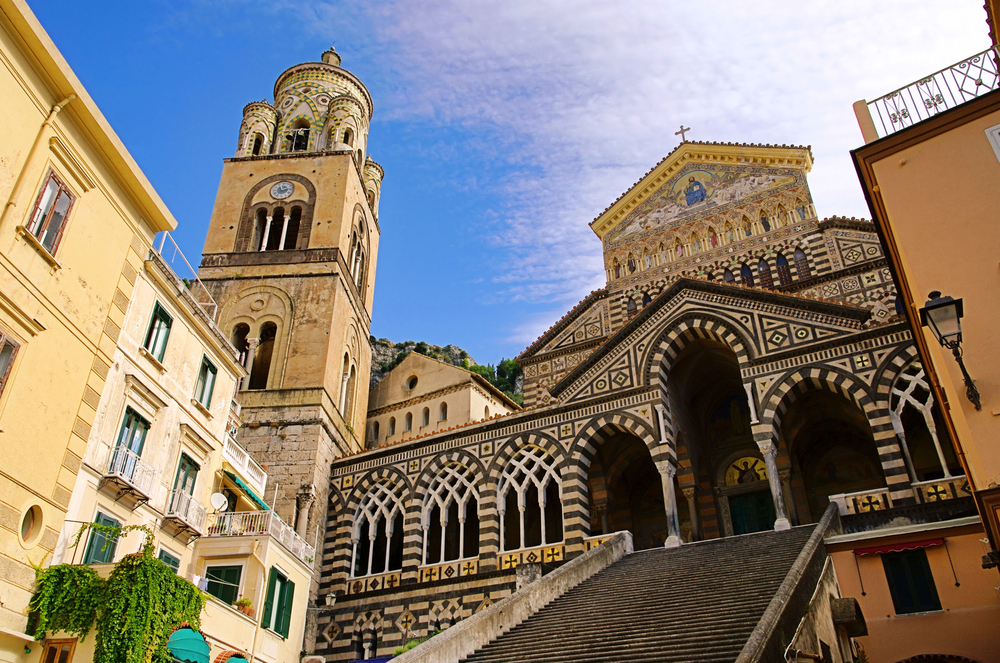 Since the region was first settled by the ancient Greeks and Romans, it goes without saying that the Amalfi Coast has some historic landmarks that will tear you away from the beach. Nearly every village on the coast is crowned by a ceramic-domed church. Amalfi’s Arab-influenced 9th century cathedral stands out as a particular highlight. Meanwhile in Praiano, you can sunbath under the guard of a medieval tower, or head to Ravello to see the lavish medieval villas. 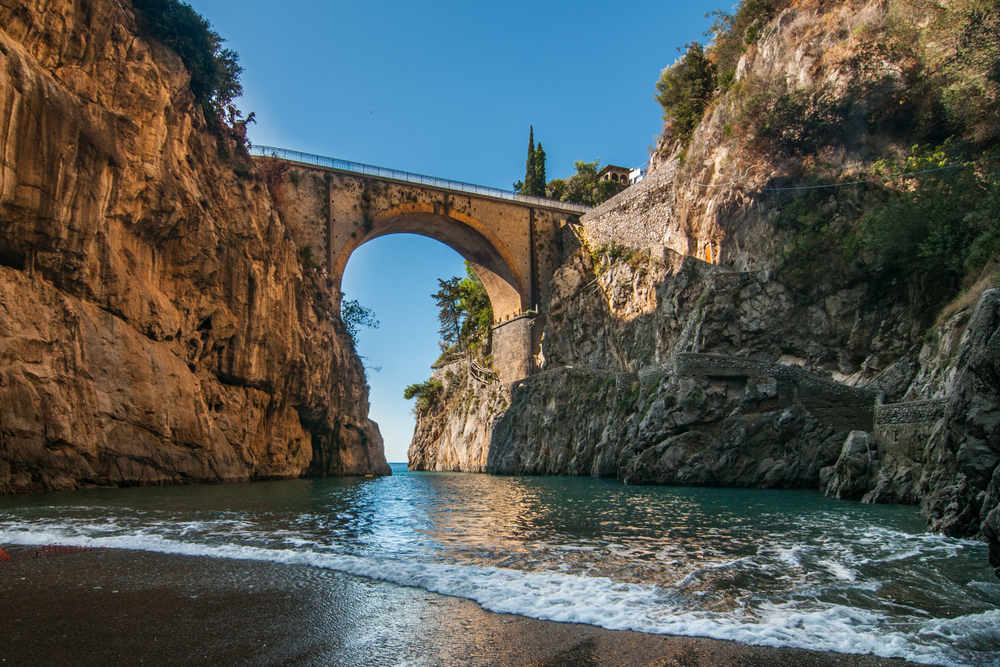 The only fjord in Italy, the Fiordo di Furore is a sight unique to the Amalfi Coast. A cliff-side staircase leads down to a jumble of charming houses and a hidden beach. Occasionally, professional dare-devils take advantage of the 30 meter high bridge that spans the fjord, using it as a jumping-off-point for cliff-diving. There are also several walking trails that will immerse you in the coast’s amazing landscape.

If this has you ready to start planning, the next step is deciding where to stay on the Amalfi Coast!