As daylight hours dwindle, the New England foliage turn hues of brilliant red, orange, and yellow, blanketing the mountains and hills in an explosion of color. While there’s no right or wrong time to explore New England, Fall might be the fairest season of them all.

The hardest part of planning your trip is deciding where to visit, but don’t worry – we’ve done it for you! We’ve put together a 4 day itinerary featuring the very best of New England’s foliage, where the leaf-peeping opportunities are second to none!

Along the way, we’ll take you to sightseeing stops where you’ll explore history, culture and the great outdoors. 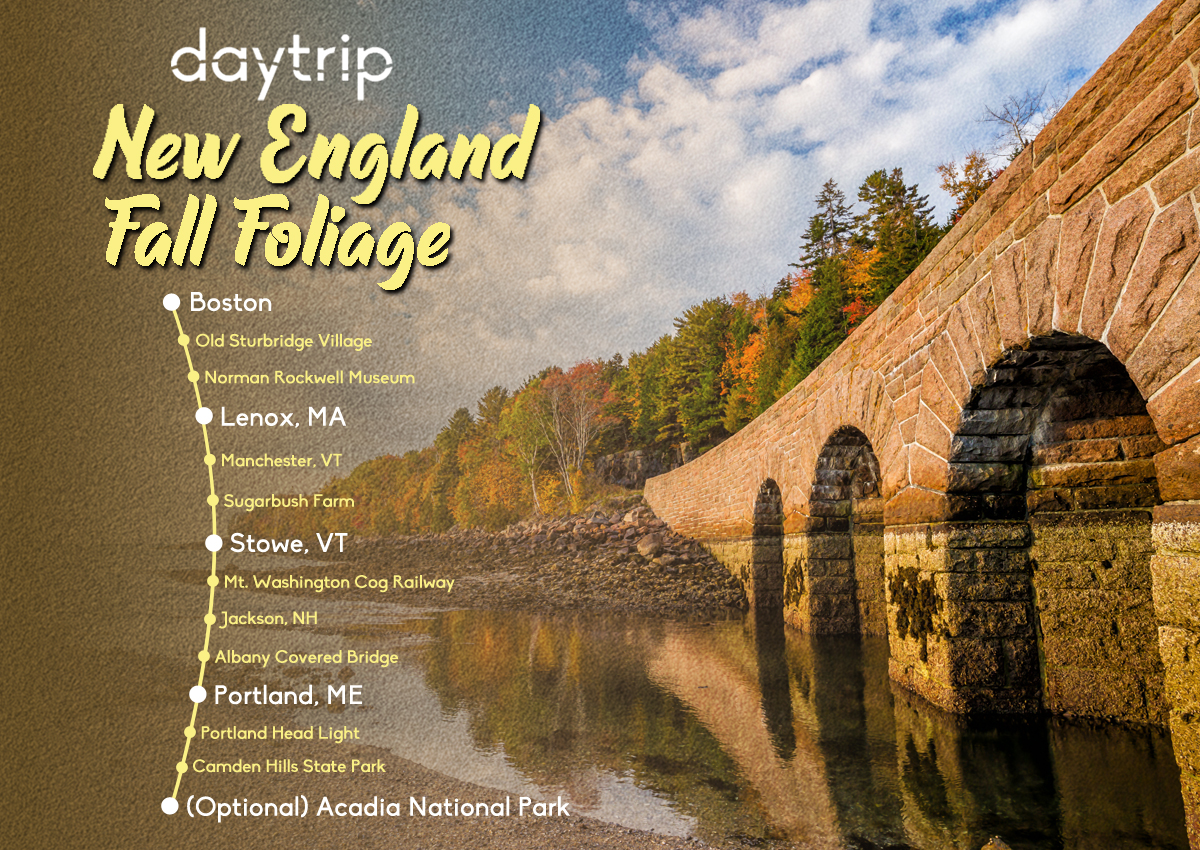 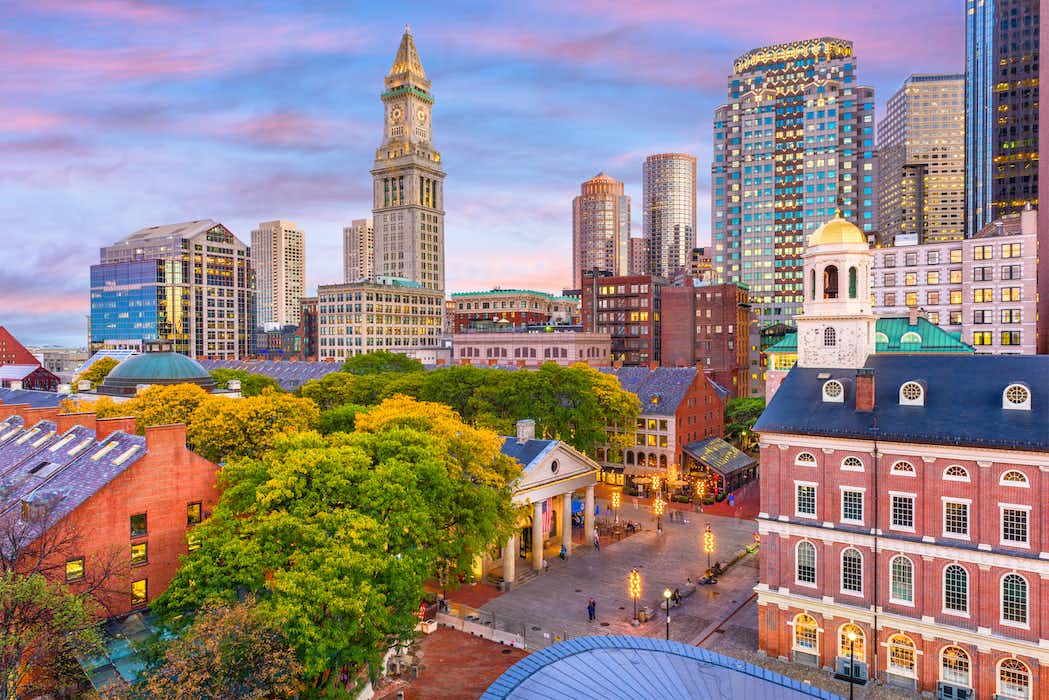 Boston is the largest city in New England, known for its history, colleges, museums and galleries. But it’s no concrete jungle. Boston is a “green” city, packed with parks and tree-lined avenues. During the fall, you can get some pretty good leaf peeping done in the city.

The Public Garden, with its distinctive Japanese Maples, turns a patchwork of colors as its trees turn according to their own schedules, while the golden leaves lining the Boston Esplanade are reflecting in the river. Beacon Hill, Boston’s oldest neighborhood, is also its most beautiful. Especially in the fall when the trees in front of the Victorian brick row houses all turn color.

But we’d say the Harvard Arboretum steals the show, with around 5,000 species of trees that burn bright with colorful leaves during the fall. America’s oldest public arboretum hosts the free Boston Fall Foliage Festival on the last Sunday of October annually. Don’t worry if you miss the festival though, you can visit daily from sunrise to sunset!

While all that is great, it’s still not the same as the unbridled explosion of color you get in nature. So get out of the city and head from Boston to Lenox to begin your fall foliage tour. 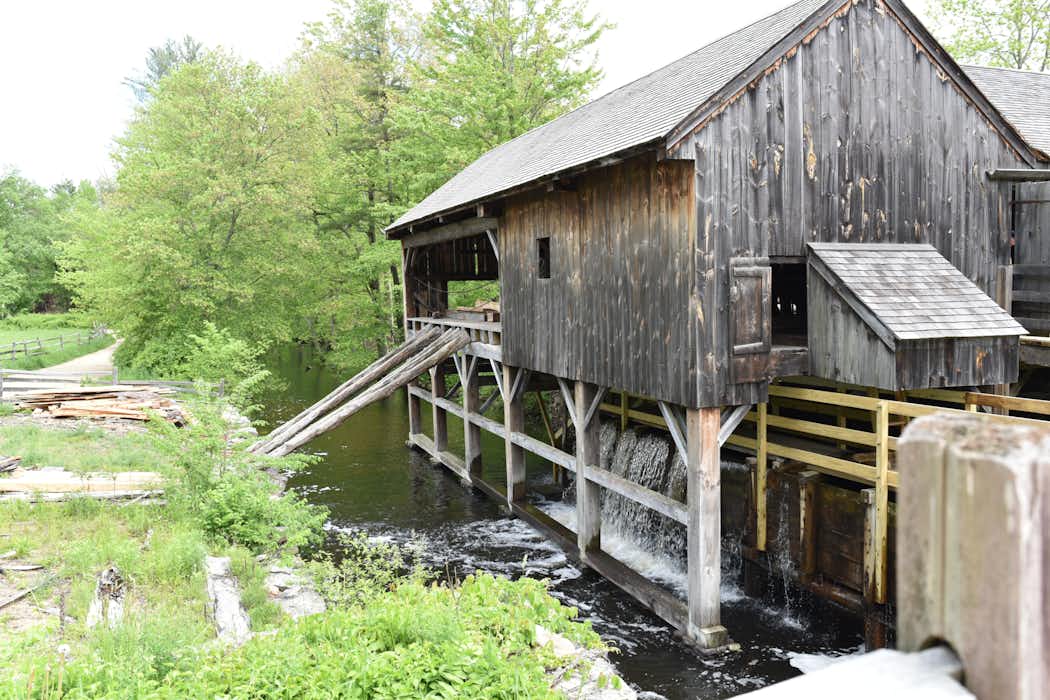 Stop for three hours at one of America’s largest living history museums to experience rural living. Both entertaining and educational, the Old Sturbridge Village was born from the founder’s obsession with antiques! See the working farm, visit the shoe shop, have a drink at the cider mill, and poke your head into 40 other historic buildings! And you get to enjoy this time warp amongst the backdrop of gorgeous fall foliage.

Art doesn’t get much more American than Norman Rockwell. Pay a 90-minute visit to the Norman Rockwell Museum in his home town to see the world’s largest collection of his work. Among its most prized pieces is the iconic Four Freedoms series. This collection of oil paintings depict President Franklin D. Roosevelt’s 1941 plea for four fundamental human rights. Then there are the original illustrations from his near-50-year run at the Evening Post, including the 1955 “Marriage License”, and “Family Tree” from 1959!

Welcome to the Berkshires, the Eastern USA’s ultimate outdoor sanctuary. Lenox is a quaint, picturesque place, rife with history, culture and scenic landscapes.  And its hiking, leaf-peeping, boating and biking is hard to beat.

Famous for the “Berkshire Cottages” – vast estates built by affluent individuals in the late 19th and early 20th centuries to use as summer homes – the Lenox region has long been a luxurious retreat. The vibrant downtown area features independent boutiques, restaurants and galleries, a place where artisans and creatives hone their crafts and treat visitors with unique offerings.

Visit the Church on the Hill for views across the whole town, and National Historic Landmark “The Mount”, a lavish country estate designed by legendary American writer Edith Wharton that celebrates her legacy. The Ventfort Hall Mansion and Gilded Age Museum is a must-see for a glimpse back in time. Delve into American history with a tour of the mansion and learn about the life, industry and society of the late 19th century.

Lovers of the outdoors fall head over heels for Lenox and its unspoiled nature. The intense New England foliage decorating the mountain ranges and reflecting in the lake waters are postcard-perfect. At the Lenox Station Museum, take a tour of the restored station, see exhibits displaying historical railway memorabilia and learn how the railroads worked and evolved over time.

Take the Berkshire Scenic Railway through the Hoosac Valley to experience one of the top 10 foliage train rides in New England. Gaze in awe at the spectacular scenery as you enjoy this relaxing 10 mile loop through the Berkshire Hills!

Book your private car from Boston to Lenox

When you’re done with the gilded mansions, head from Lenox, MA to Stowe, VT, the Aspen of the East!

Nestled between the Green Mountains and the Taconic Range, Manchester has been a favorite natural retreat since the 19th century. Abraham Lincoln’s son even built his summer home here! Stop for 90 minutes to take in the small-town charm, or head to the top of Mount Equinox and take in a vibrant panorama of New England foliage. Or to surround yourself in the serenity of the Emerald Lake State Park.

What is Vermont best known for? Foliage, cheese, and maple syrup. Stop for an hour to experience all three at this “Cheese Lovers Paradise”. Take a walk through the maple woods to see the giant trees in all their splendor, before learning how Sugarbush Farm makes their maple syrup, and sampling their syrup and award-winning cheeses.

Sitting at the base of Mt. Mansfield, Vermont’s highest peak, Stowe is “The Ski Capital of the East”. And in the fall, it’s also one of the top 10 foliage destinations in the country!

Nestled between two state forests, vibrant fall foliage can be found at every corner, in every direction. Pretty much the only way not to see the colorful trees is to close your eyes. Stowe is an outdoor adventure playground, with hiking, biking, and boating all within easy reach. And it doesn’t get much easier than the 5.5 mile paved “Rec Path”, which follows the babbling Little River from the town center right to the base of Mt. Mansfield. Then there are the many hiking trails, including trekking up Mt. Mansfield or the easy stroll to the beautiful Moss Glen Falls.

If you can’t decide on a route for the best leaf-peeping, consider a guided tour. A Stowe foliage expert will take you off the beaten path to locations beyond your imagination, where you’ll see some of the greatest scenery in the country.

While technically in the next town over, the Waterbury Reservoir is another highlight for leaf peeping. Surrounded by the Green Mountains, you get double the foliage as the colorful trees are reflected off the water. It also gives you a chance to sample some of Vermont’s favorite foods. Stop by the Cold Hollow Cider Mill for homemade apple cider and apple cider donuts before heading down the road a bit to the original Ben & Jerry’s factory. The guided tour is great – you get to sample an “experimental” flavor at the end!

Book your private car from Lenox to Stowe

Stowe, VT to Portland, ME

Once you’re ready for a change of scenery, head from Stowe to Portland, Maine, the charming harbor city. 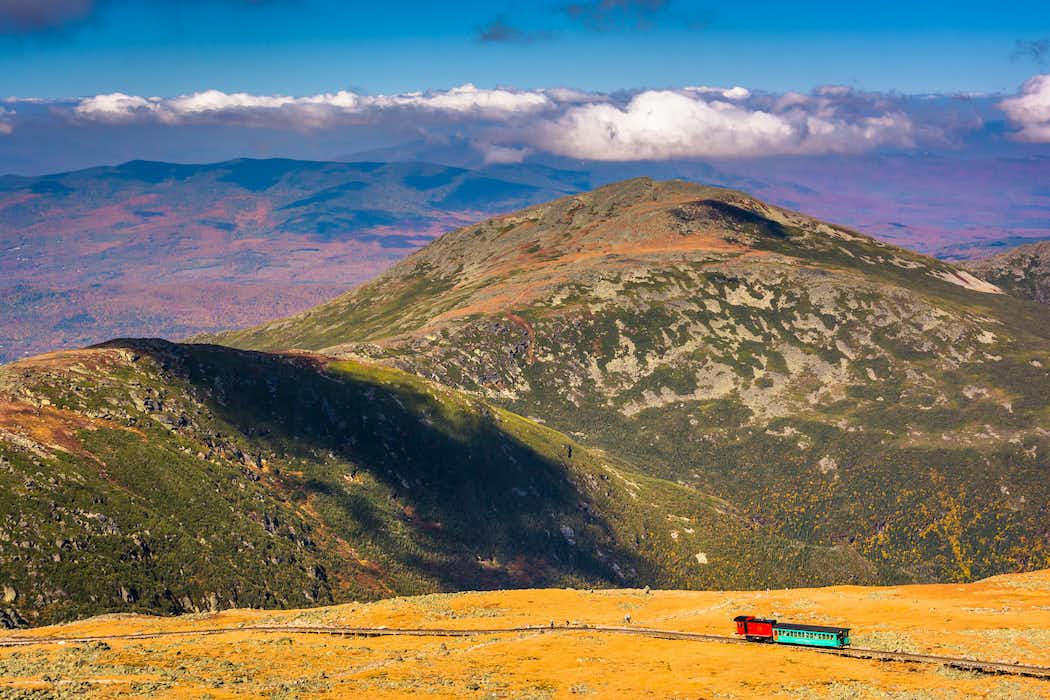 One of the greatest shows in the US is even better in the Fall. The Mount Washington Cog Railway, brings you through three different ecological zones to the top of the highest mountain in the Northeast. Take in the amazing New England foliage during the steep ascent, culminating in a sweeping panorama across the Mount Washington valley on your 75-minute visit.

Surrounded by the foothills of the White Mountains, Jackson’s beautiful surroundings have been attracting artists for over 200 years. Stop for 90 minutes and take the easy walk to the picturesque Jackson Falls, or hike up Wildcat Mountain for a sweeping colorful panorama. But don’t miss the charming, covered Honeymoon Bridge – the pride Jackson is also the most photographed monument in New Hampshire! 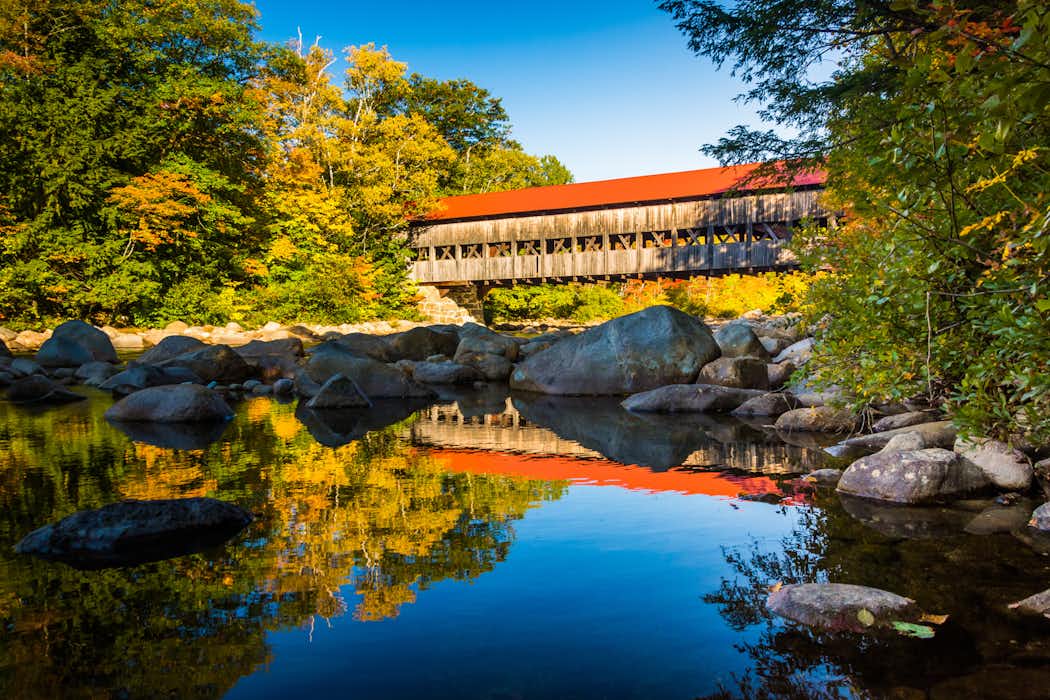 Take a detour through one of the most famous New England fall foliage drives on the Kancamagus Highway – the “the Kanc”. Winding through the breathtaking White Mountain forest, the boldly colored leaves reflect on ponds and lakes. Stop for 20 minutes at the historic Albany Covered Bridge for a perfect New England foliage photo op.

There’s no shortage of idyllic fall destinations in New England, but Portland, Maine, is something special. A leaf-peeping paradise, Portland is surrounded by dense forests, and the stunning harbor is lined with trees. Come autumn, the city erupts with color.

For the best views in town, head to the top of the Portland Observatory, a historic maritime signal tower that dominates the town. The tree-lined streets in the town center are filled with quirky cafes and bars and independent boutiques. The Old Port district is packed with charm, its cobblestone streets home to 19th century warehouses that have been transformed into hip cafes, galleries, and shops.

And, of course, thanks to its coastal location, you can gorge on fresh seafood you won’t get in Vermont! Every day local fishermen catch oysters, mussels, lobsters and crab, and then the restaurants serve them up in traditional dishes. Craft beer is becoming a fast favorite with residents of Portland, with new breweries popping up all the time!

During the fall, go whale watching for the last chance to see the ocean’s gentle giants before they migrate to warmer waters. Seeing these majestic mammals play in the water against a backdrop autumnal color is magical.

Book your private car from Stowe to Portland

If you’re not quite ready to finish your Fall Foliage tour, we have a special treat! Head from Portland to Acadia National Park to experience the leaves change on glacier scoured peaks overlooking the Atlantic. 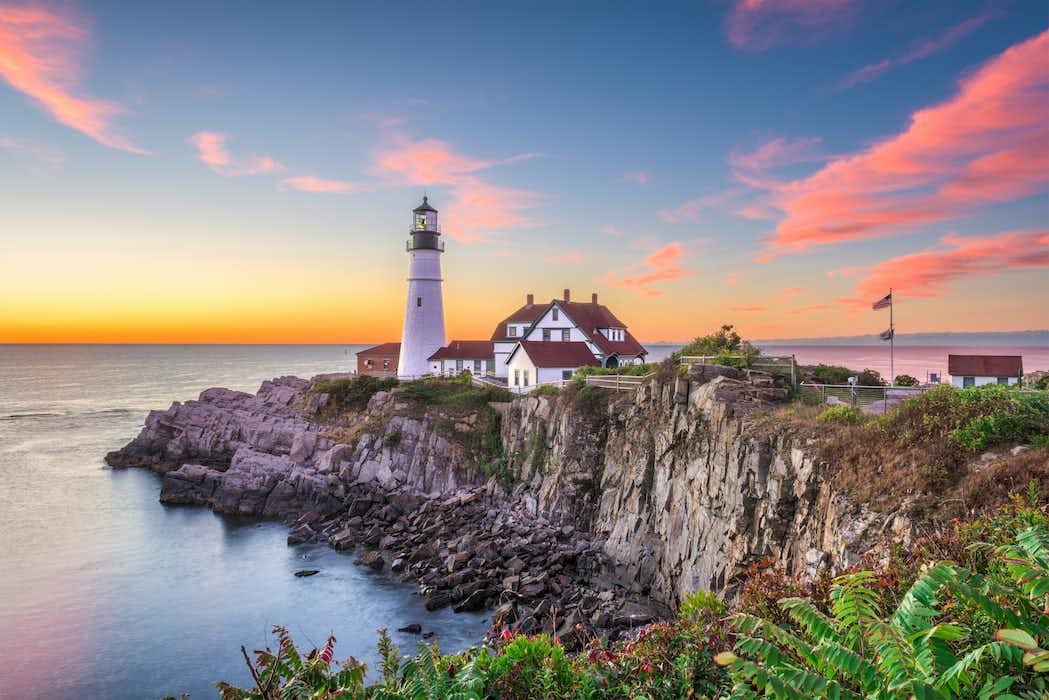 Built by order of George Washington in 1791, Maine’s oldest lighthouse is a picturesque maritime icon. Pay a 90-minute visit to admire the lighthouse perched on the rocky headland. Then step inside to learn about its proud history. To reach the Portland Head Light, you pass through the Fort Williams Park, which is worth taking a few minutes to explore to see the late 19th and early 20th century fortifications. 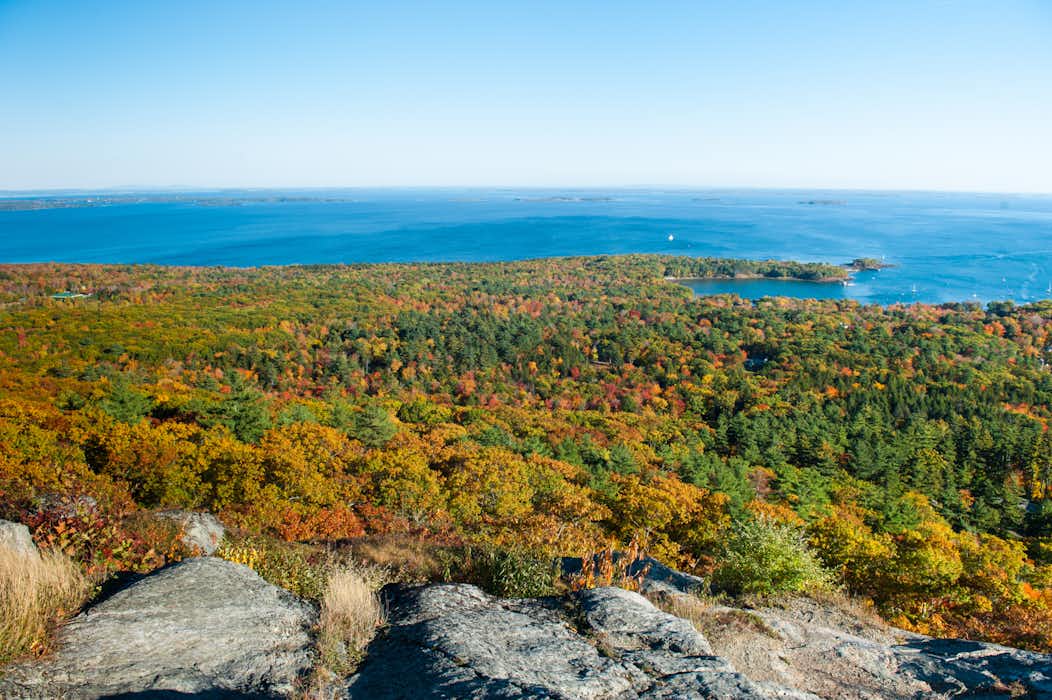 Overlooking Penobscot Bay, the Camden Hills State Park is bound to be one of the highlights of your fall foliage trip. Stop for an hour to hike to the top of Mount Battie. The view is one of the most beautiful views on the East Coast – made even better when it’s painted with vibrant fall foliage.

Set on the East Coast’s highest rocky headlands, Acadia National Park is one of the most beautiful in the country! Carved by glaciers, and covered with dense forest, the rugged mountains and rocky coast transform into autumnal kaleidoscope when the leaves change.

There’s over 150 miles of hiking trails, but the best views are from the top of Cadillac Mountain, where you’ll have a full panorama of the park and its glorious colors. And for true New England foliage enthusiasts, leaf-peeper tours can be arranged.

Leaves aren’t the only things to peep; birdwatchers will be impressed by the 308 species found in the park. After the sun sets, there’s stargazing to do! With so little light pollution, Acadia National Park is the premier skywatching spot on the Eastern seaboard. And plan to wake up early; climb to the top of Cadillac Mountain and you’ll be one of the first people in the US to see the sunrise!

Book your private car from Portland to Acadia National Park

Ready for your Fall Foliage Tour?