Mexico Magical Towns Programme (Pueblos Mágicos) is a government initiative spearheaded by the Mexican Secretariat of Tourism. This is a way to promote places in Mexico that are otherwise overlooked by the tourism crowds of Cancun and the Baja coast. These towns offer “magical” experiences due to their culture, art, cuisine, folklore and beauty, which are bound to bring tourism in the rural Mexican interior. Since its inception in 2001, the Magical Towns Programme has amassed more than 83 towns and villages in each of the 31 Mexican states. For a mostly rural community, it has also given the opportunity for the towns’ residents to also make a living from tourism, in turn, diversifying the economy and stemming out the exodus to urban areas that many countries around the world are plagued with. This programme has proved wildly successful even going as far as reducing poverty in the magical towns’ surrounding regions!

With Daytrip, you can experience the beauty and the magic of these towns with our thematic tour. You will be able to see the real culture of this massive and dynamic country, experience a beautiful mixture of culture, history, sights and tastes with this tour. You will be able to get a sense of everything Mexico has to offer, all with the added bonus of riding with one of our partner drivers, who will be a local with the drive and passion for explaining and showing you around Mexico’s best and most authentic!

Your starting point is Ciudad del Carmen, a city located on the island and a gateway into the Terminos Lagoon. It is sandwiched between a heavily protected wildlife area, creating a sanctuary for both the dolphins and turtles that populate the area, but also people wanting to relax in the sunny Mexican heat!

The city is known for its colonial influences and history, with places like the Museo Victoriano Nievez to visit and get a sense of the historical significance of the region. Visit the Playa Norte for some clear waters, blue skies and lots of fun!

The only major Mayan city built of bricks instead of limestone, as well as the westernmost city of the Mayan civilization, Comalcalco is a very noteworthy historical site. With 432 structures across the old city, you will be able to step back in time to get a true sense of Mayan life! 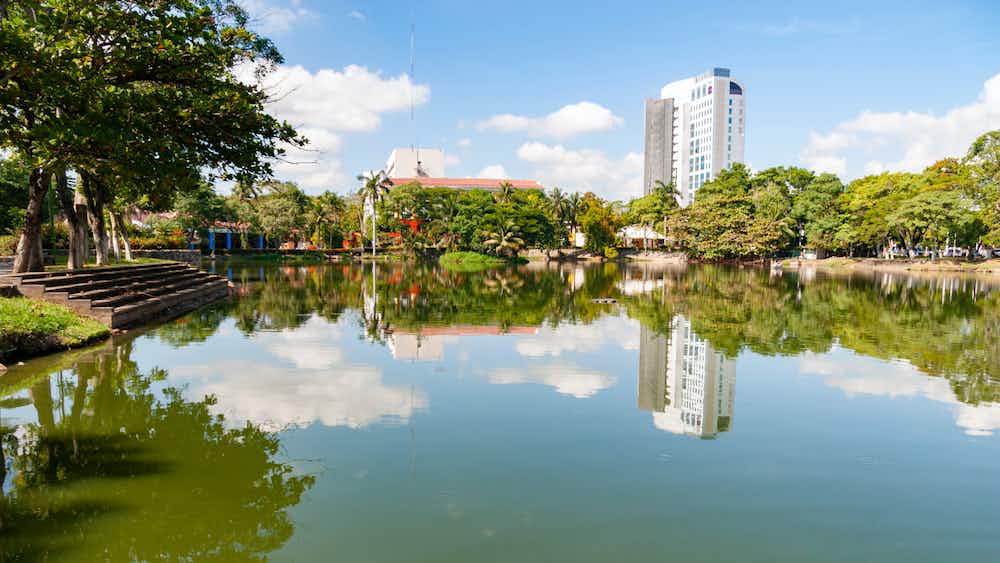 The capital of the Mexican state of Tabasco, this city is a force to be reckoned with. The centre of the Mexican oil industry, it is a highly modern city rich with natural resources. Attacked for many decades by pirates, the city was in ruins for much of the 16th century. However, during the colonial age, the city became a thriving city being named as a “New Spain” by captains and generals.

Today, it is a beautiful and lively city filled with cultural and natural attractions! Visit the Casa de los Azulejos, a beautiful and imposing colonial building, built in 1890 with Gothic and Moorish styles. You can also visit the La Venta Museum, with the largest and most important exhibition of Olmec Native Mexican art. Relax at the Plaza de Armas with sprawling fountains and the beautiful Palacio de Gobierno. With leafy streets and a warm climate, you will find it to be a stunning first stop on your journey!

Book a car from Ciudad del Carmen to Villahermosa

After a sojourn in “Beautiful Village” head on over to the next beautiful stop; Palenque.

A cacao hacienda, this traditional chocolate factory not only shows you the full process of making this sweet gold, you can even participate in the process! With a full array of activities, you will be able to harvest at the museum as well as prepare things like your own drinks.

Shining through the thickets of cedar, mahogany and sapodilla trees, Palenque is the perfect setting to get to know a beautiful Mayan civilization. While smaller than Tikal or Chichen Itza, it contains some of the best examples of Mayan architecture. Archaeologists have reconstructed the majority of the history of this settlement from reading the hieroglyphical inscriptions found on many monuments. The most interesting part is less than 10% of the total city has been explored, leaving more than a thousand buildings still hiding in the jungles.

You can explore many unique sites like the Temple of the Inscriptions which was a funerary monument of Hanab-Pakal. The temple houses one of the longest texts known to the Mayan world. The Palax is a complex of several structures and was built over four centuries. There are also notable buildings like the Temple of the skull which has a skull on one of the pillars. With this many relics of the past, it is impossible to ignore the sheer beauty of these sites.

Book a car from Villahermosa to Palenque

After taking a dip into history, it is time to venture up into the highlands.

Another Mayan archeological site, this is a beautiful group of different sized-pyramids that are set on rising terraces. Marvel at the Stelas depicting different eras of the city, as well as learn about the many rulers who presided over the region! 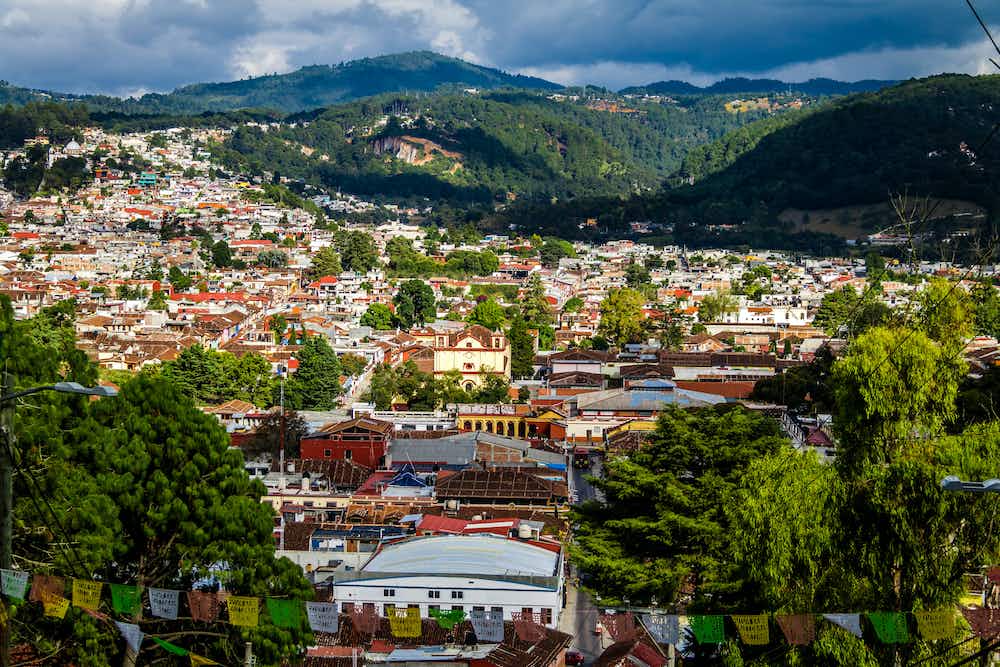 Also known by its native name, Jovel, is the cultural capital of this part of Mexico. This leafy town maintains its original layout and is adorned with cobblestone streets, red terracotta roofs and balconies decorated with flowers. With a beautifully vibrant history, San Cristobal’s history is based on its culture and indigenous population.

You can visit the Santo Domingo convent. A beautiful church with golden panels and beautifully built pillars that truly add to the holy feel of the building. The San Cristobal City Hall is a great example of late-colonial spanish architecture. With the main plaza of the city orbiting a kiosk that sells a host of different foods, including cured meats, that have a large Spanish and German tradition, from the German settlers of the city. Also in Santo Domingo is the market that will filled with indigenous textiles and crafts that define the city’s cultural life!

Book a car from Palenque to San Cristobal

After a relaxing stop in the cultural center of Chiapas, it’s time to continue to Comitan

A rather different church from the others, this church is decorated with beautiful indigenous accents, as well as covered in pine from the interiors. No photos are allowed inside as this atmospheric experience is sacred.

Located about halfway between San Cristobal de las Casas, and the major town of Tenejapa, the tiny Mayan settlement of El Romerillo doesn’t even show up on the map. Its inhabitants are entirely indigenous, and entirely without internet. Being an indigenous settlement, the Romerillo is in typical Chiapas Maya style, which means giant wooden crosses colored in shades of blue with pine branches hanging from them. Below these, the graves are recognized by their humble mounds and more modest-sized wooden crosses, among which livestock can often be seen grazing. 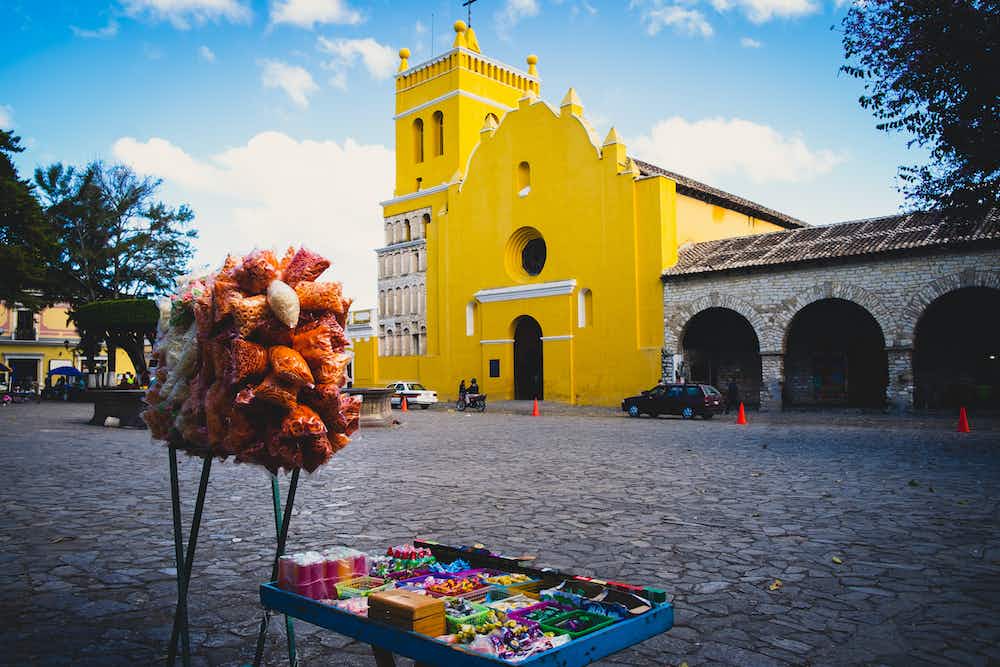 A traditional town at its finest, Comitan is also the fourth largest town in Chiapas State. The Tzeltal People of the area founded this town in a swamp, a far cry from the beautiful town it is today. You can feel the indigenous influences on the area, a beautiful attribute to the Southern Mexican regions!

Today, Comitan is a wildly popular tourist destination for Mexicans, although it is becoming more and more popular with foreign tourists as well! The colonial and indigenous structures make a beautiful mix, the clean streets and the pleasant disposition of the locals are a big reason why it is a trusted vacation spot for Mexicans! For culture, visit the Junchavin theatre, which holds European as well as Indigenous Mexican theatre plays. For some ecotourism fun, visit the nearby Mayan ruins of Tenam Puente, as well as the Lagunas de Montebello, a series of cascading waterfalls (this costs some pesos to enter).

Book a car from San Cristobal to Comitan

After visiting one of the most popular domestic tourist destinations, complete your journey to Mexico’s natural centre! 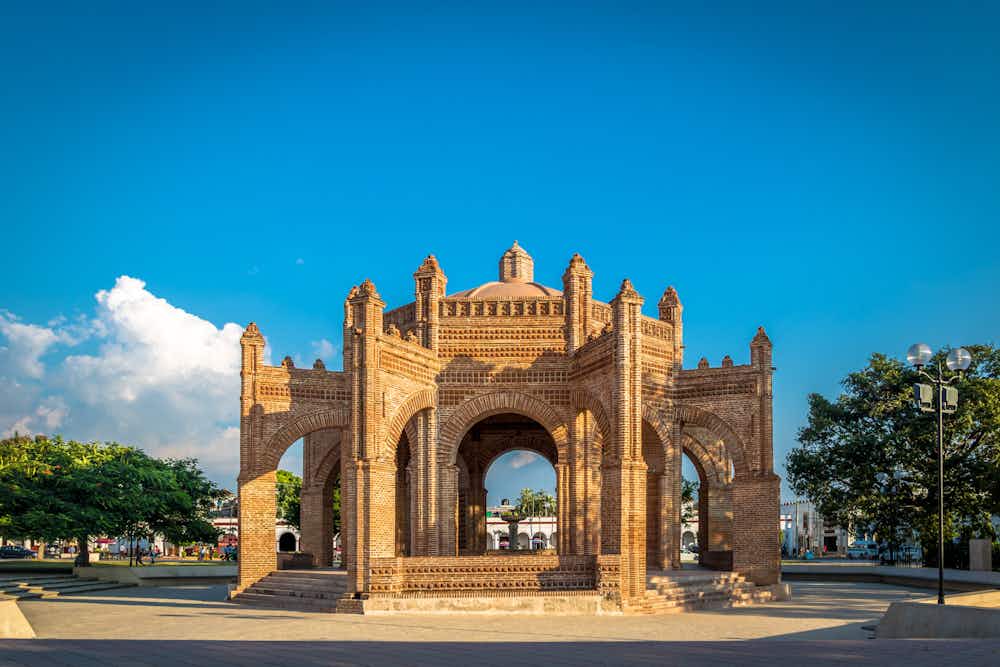 Filled with charming colonial architecture, this quiet town is the oldest in the state. Relax and enjoy the La Pila fountain in the main plaza, or go admire the mixed architectural styles of the Santo Domingo Church. Or add an extra hour to your visit to explore one of the oldest archaeological sites in Mesoamerica!

Stop for 75 minutes to hike through the rainforest around this dramatic river canyon and soak in the spectacular views! 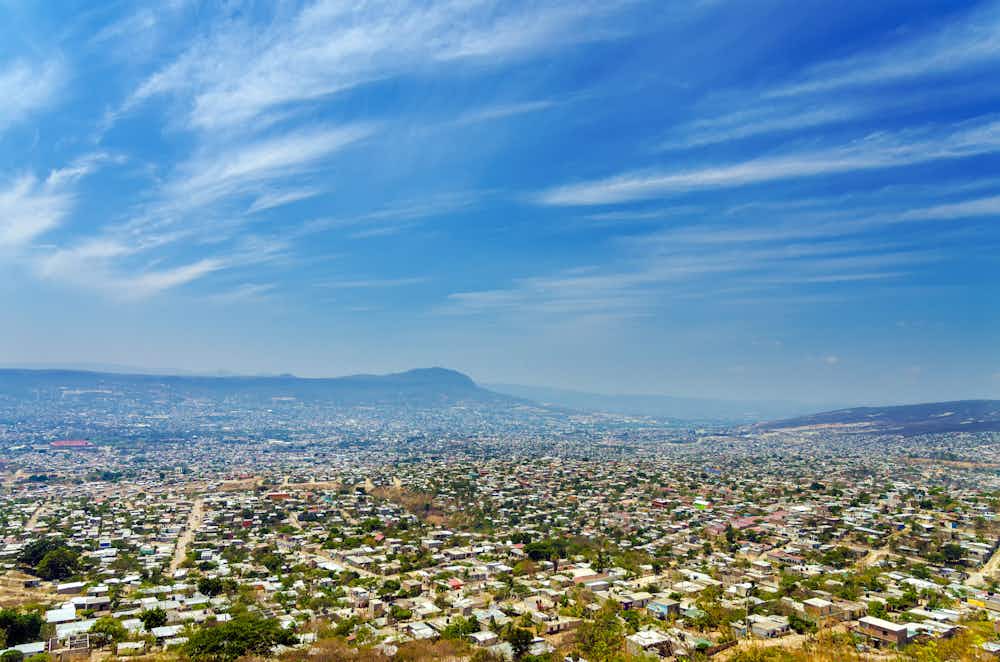 The capital of Chiapas State, this city is a modern wonder and a natural one in every regard! One of the safest cities in Mexico, European experts have labelled Tuxtla Gutierrez as a ‘City of the Future’! Tuxtla has a vibrant but tumultuous history, from uprisings to revolutions, but has come a long way to become the quiet and peaceful city it has worked so hard to become.

Today, the city orbits around the Main Plaza, called the Plaza Civica, which is lined by many administrative buildings. For a lesson on this city’s colourful history, visit the Old Town Hall, now the city’s museum. The most famous site is the St. Mark’s Cathedral, with its apse, the only one preserved from the colonial era in Chiapas State. Relax at the Marimba Garden Park, where you can enjoy the leafy and lush gardens as well as the beautiful colonial kiosk! For an indigenous taste, go to the local tianguis where you can snag a great deal on timeless indigenous crafts and delicious local delicacies like Pozol!

Book a car from Comitan to Tuxtla Gutierrez

Here’s each leg of the trip: