Thailand is famous for its white sand beaches and crystal blue waters, soaring cliffs and lush forests. And this jaw-dropping landscape spans much of Thailand’s Gulf Coast. So whether you want a wild natural adventure, or luxurious holiday you have plenty of options. The only real problem is figuring out how to see as much as possible!

Sure there are flights between the most popular destinations, but then you miss out on huge parts of the country. Some places are accessible by bus, but considering how hot and crowded they get, they’re not exactly pleasant. The major cities of course have taxis, but then you have to worry about how trustworthy they are. Fortunately, makes planning your tour of Thailand easy. We have service across the country (and most of Southeast Asia. All of our drivers speak english and have been individually vetted. And the best part is we’ve found the best places to visit! There’s temples, palaces, caves and more to see as you travel between destinations! 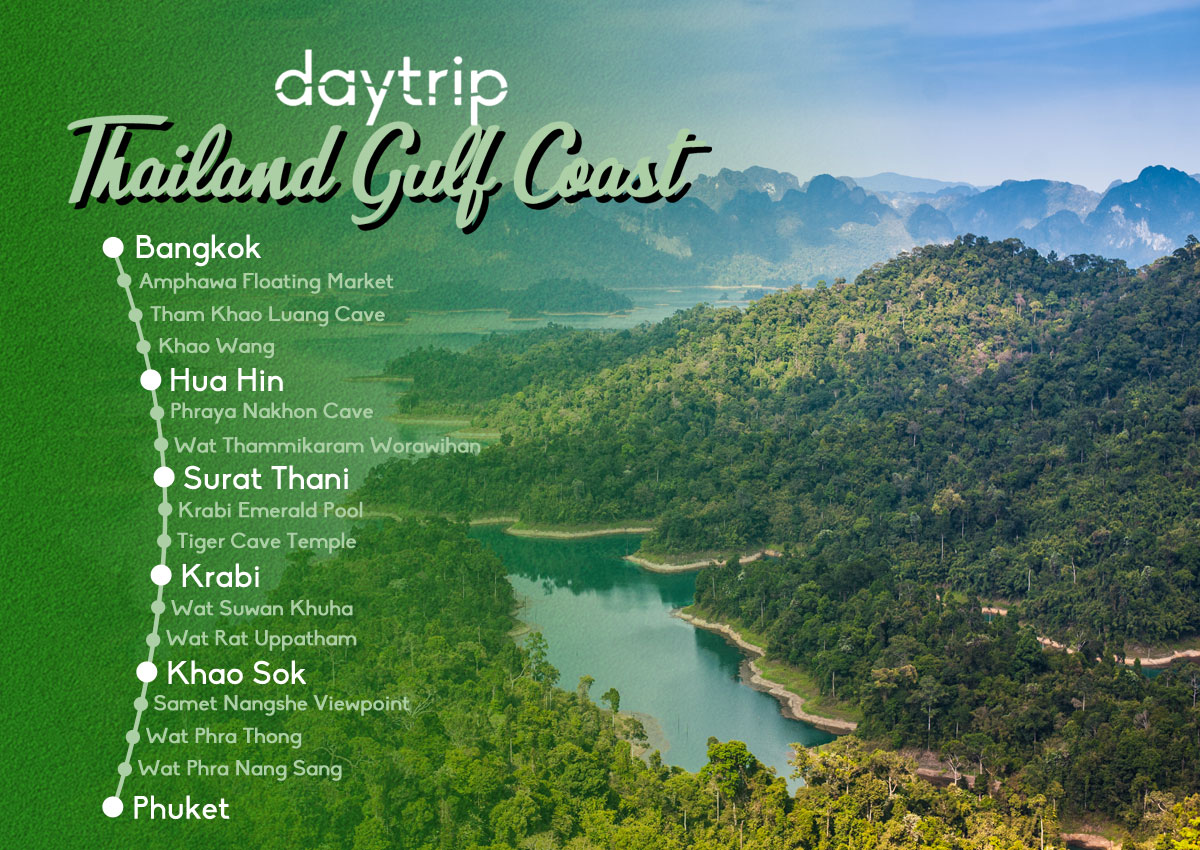 Keep reading to start your Thai adventure with Daytrip! 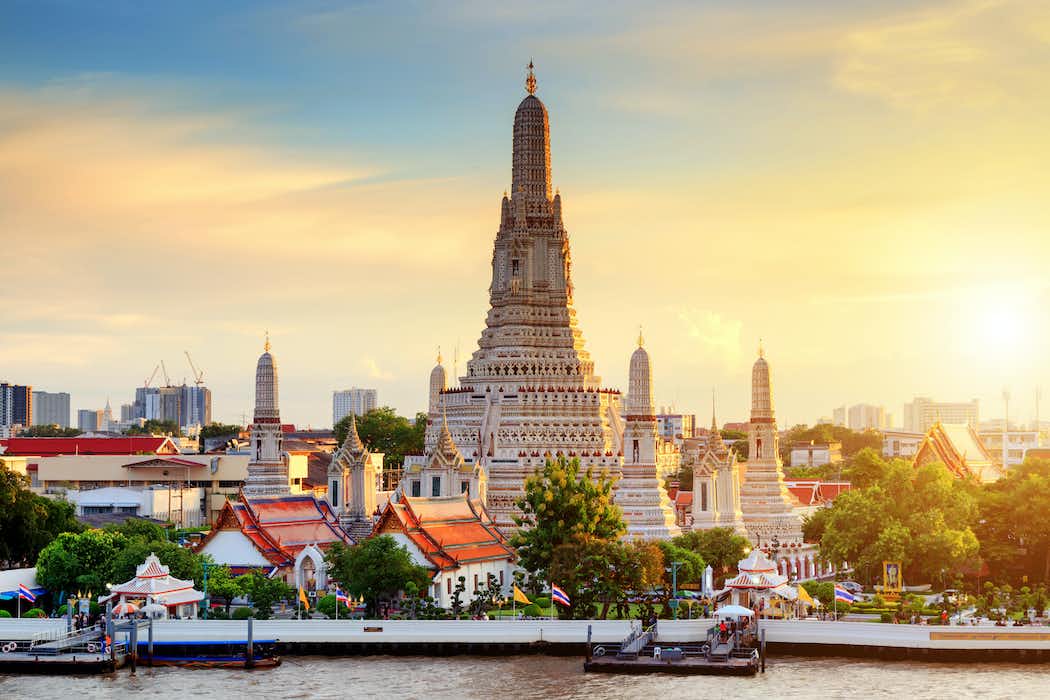 Beat from the hustle and bustle of Bangkok? It’s time to make your way south along Thailand’s Gulf Coast and see some of the best sights along the way. Today, you’ll be heading to Hua Hin via a floating market, a royal cave and a historical summer residence fit for a king. 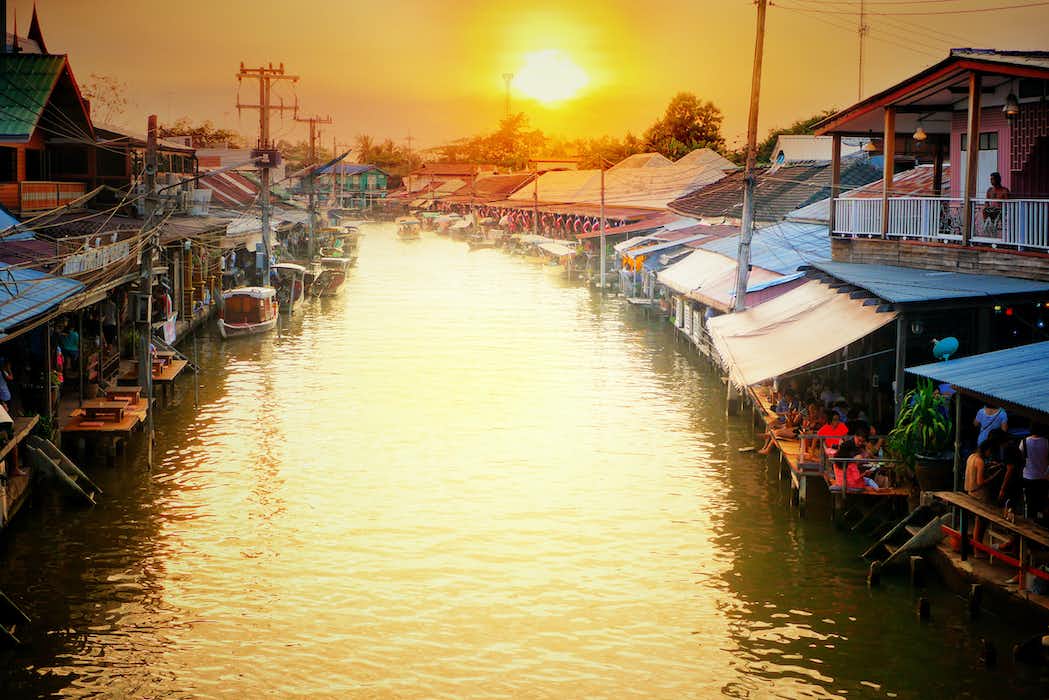 Floating markets are an iconic part of Thai culture, even being features in James Bond!  While Amphawa Floating Market wasn’t the one in The Man with the Golden Gun, it’s the second largest near Bangkok. Zip through the waterways past stands selling fresh seafood, fruits, and even street food on a guided boat tour. Or spend your hour meandering through the stalls on foot. 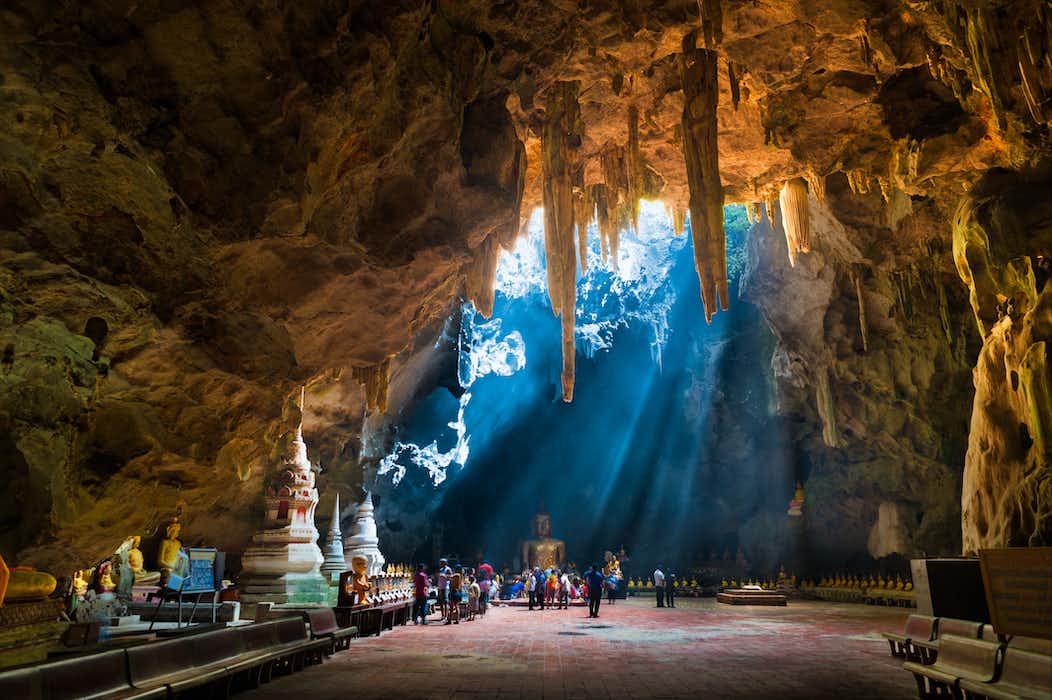 Illuminated by a natural skylight, this dreamy cave was a favorite of Thai Kings. King Rama V commissioned a Buddha statue, and Rama VI frequently came here to pray. Take 45 minutes to admire the 200 Buddha statues in this beautiful natural setting. 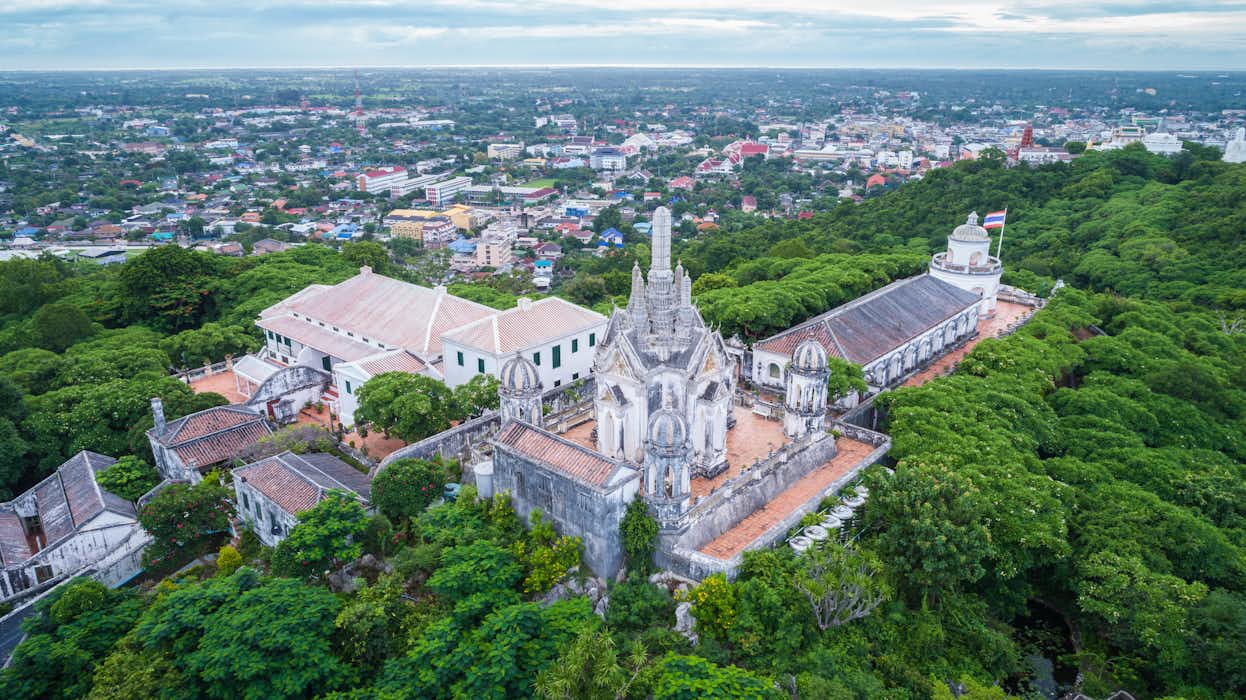 Literally meaning “hill with palace”, King Rama IV built Khao Wang as his summer palace in 1860. Today, it’s a museum and exhibition hall well worth making a 75-minute stop for. While you can take a cable car up the hill, many prefer to hike through the forest – it’s filled with monkeys! Just remember, they are wild, so don’t approach them. 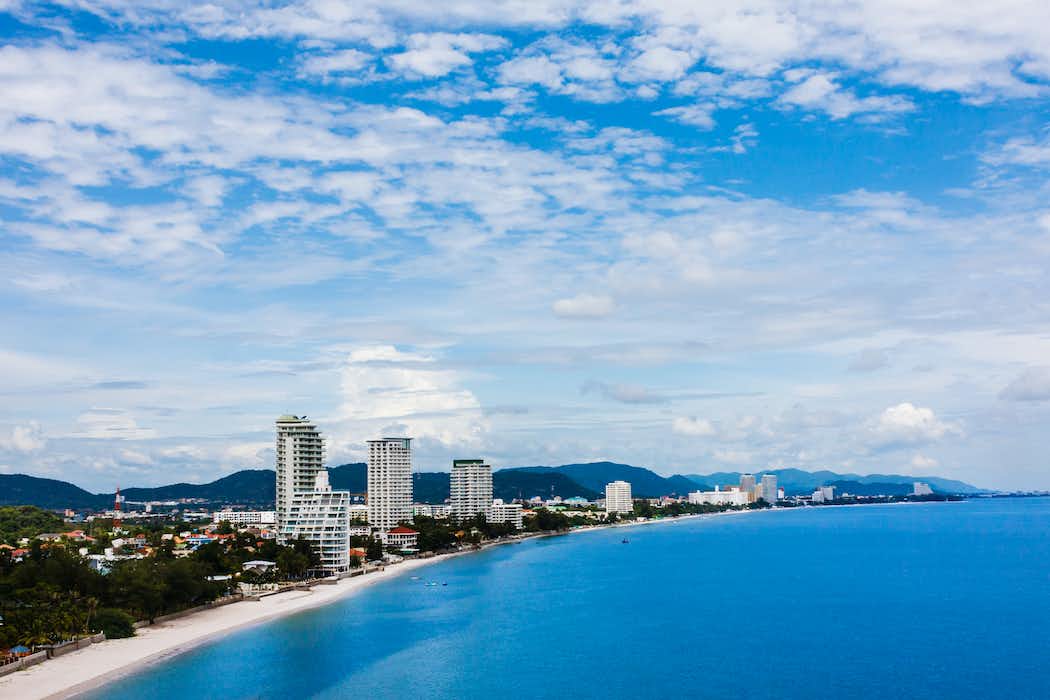 Welcome to Hua Hin, where the city meets the sea! This was Thailand’s original resort destination – King Rama VI and VII even built summer palaces here. Since the 1920s when it first gained popularity, Hua Hin has become increasingly cosmopolitan. And now that long stretch of white sand is really just supplementary.

The lively markets, especially the “Night Market”, are popular for shopping and eating. The city specializes in seafood, and you can get it everywhere from street stands to upscale restaurants. Just a few blocks from the night market, the Hua Hin Railway Station is an interesting slice of history. Built under the rule of King Rama VI, it spawned modern Hua Hin. A few minor tweaks to traditional Thai architecture give it a bit of a Victorian feel.

Book a car from Bangkok to Hua Hin

Once you’ve had your fill of the city, head from Hua Hin to Surat Thani, the gateway to Koh Samui. 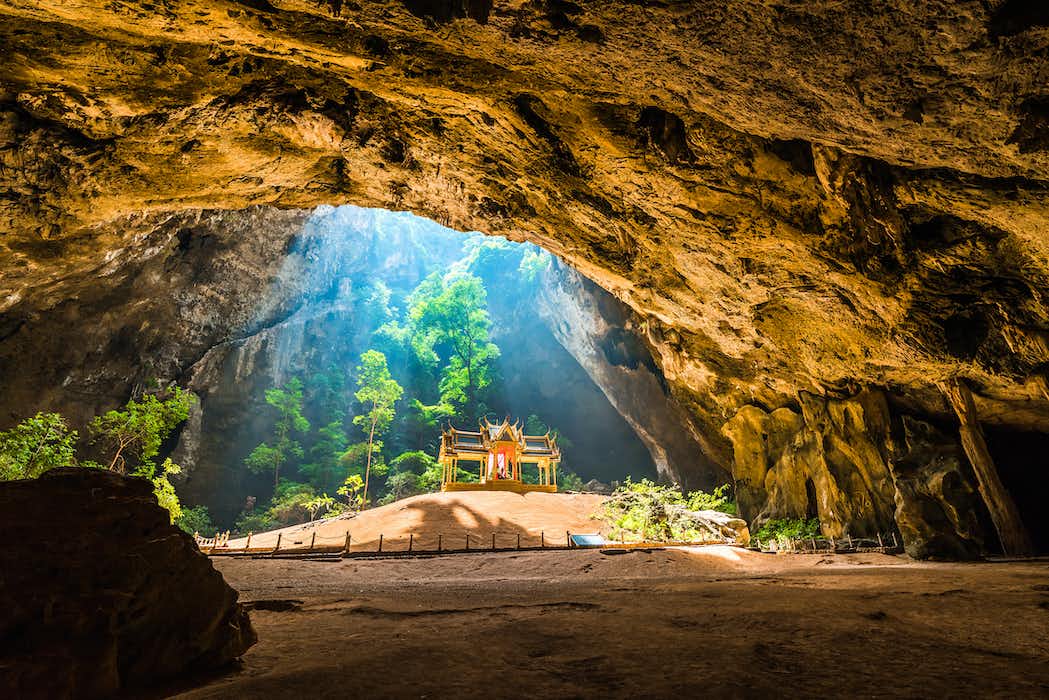 Stop for an hour to admire one of Thailand’s most beautiful caves. There are two main chambers in the Phraya Nakhon Cave, but the main attraction being the huge dome with an enormous skylight at its centre. The opening illuminates the Kuha Karuhas pavilion and little grove of trees. 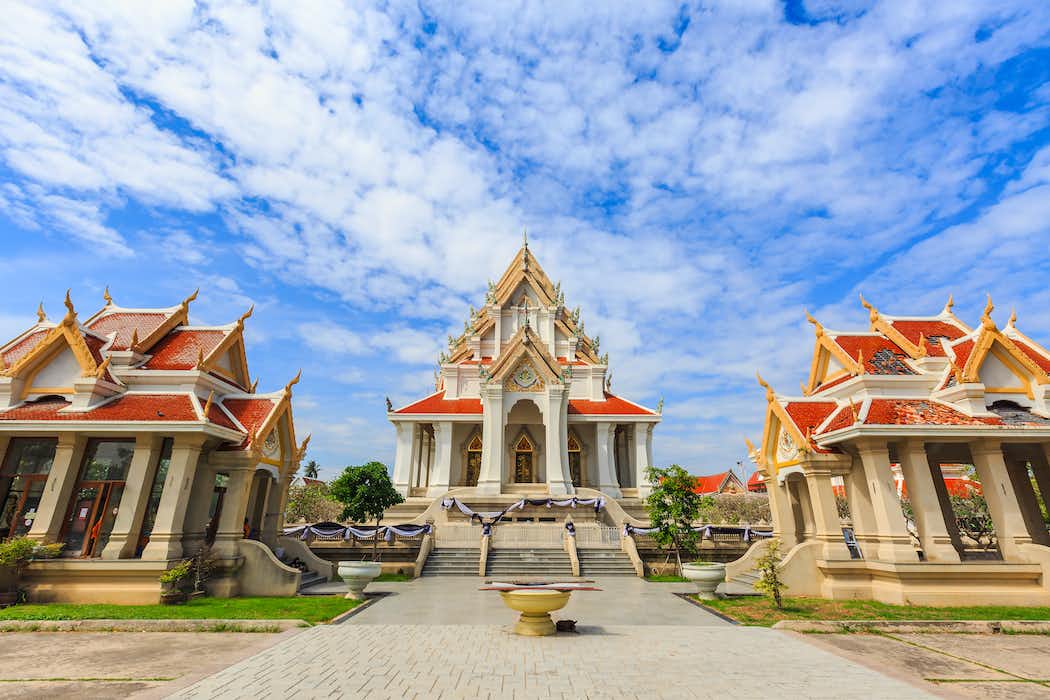 It’s a steep 418-step climb to reach Wat Thammikaram Worawihan, but you’ll have plenty of motivation – the local band of monkeys will likely accompany you for the whole climb. At the top of the hill you’re rewarded with spectacular 360 panoramic views. But before you finish your 45-minute visit, step inside the temple and pay your respects to Buddha.

Surat Thani is a typical Thai working city best known as a transportation hub. Most tourists just end up here as on their way somewhere else, but there are a few reasons to linger. A boat ride on the Tapi River, passing through tunnels of palms is really quite beautiful. And the small but atmospheric Wat Sai temple is worth a visit.

But the real reason we’ve included Surat Thani on the itinerary is the island of Koh Samui. Hop the ferry  to spend some time in this slice of tropical paradise. White sand beaches, cool blue waters, and rocky mountain peaks have made the island a popular destination for luxury travelers and backpackers alike. The downtown area has all the neon-illuminated bars and restaurants you’d expect, but head farther afield and you’ll find pristine beaches and quiet coves. You can even hike into the jungle for some waterfalls!

Book a car from Hua Hin to Surat Thani

After a pitstop in Thailand’s transportation hub, or jaunt to Koh Samui, head to one of the country’s most well-known tourist destinations – Krabi. 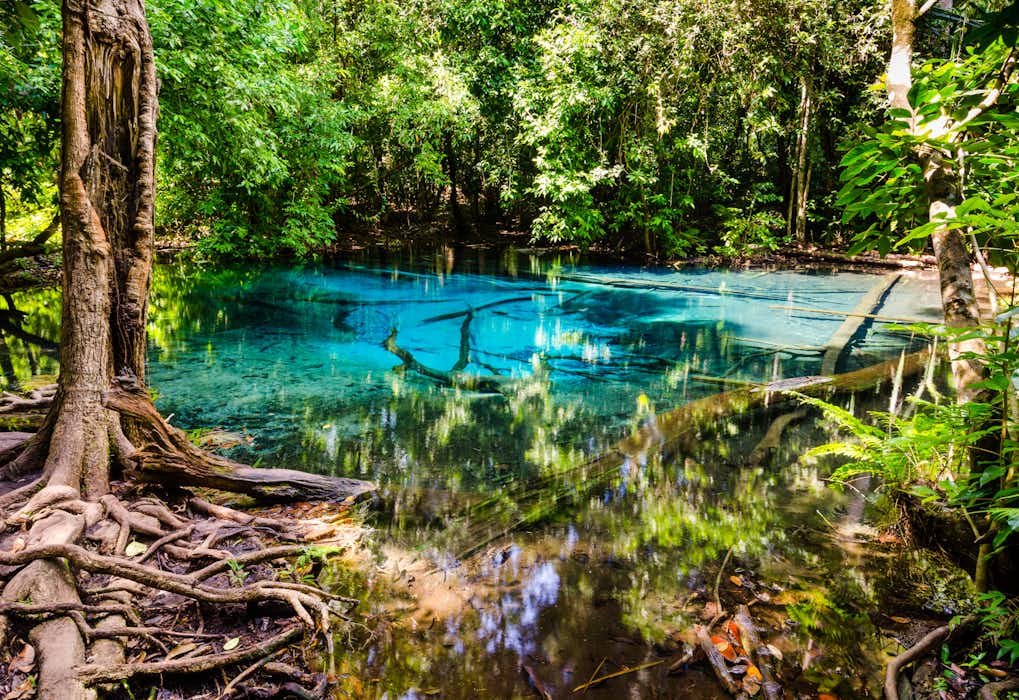 Before getting to Krabi’s beaches, stop for 90 minutes of jungle paradise. At the Krabi Emerald Pool, pristine waters from an underground hot spring cascade through a beautiful forest in a series of vibrantly colored pools. Expect to see hundreds of species of tropical plants, waterfalls, streams and rare and endangered animals. There’s also thermal hot springs known as the “Krabi Cascade”. 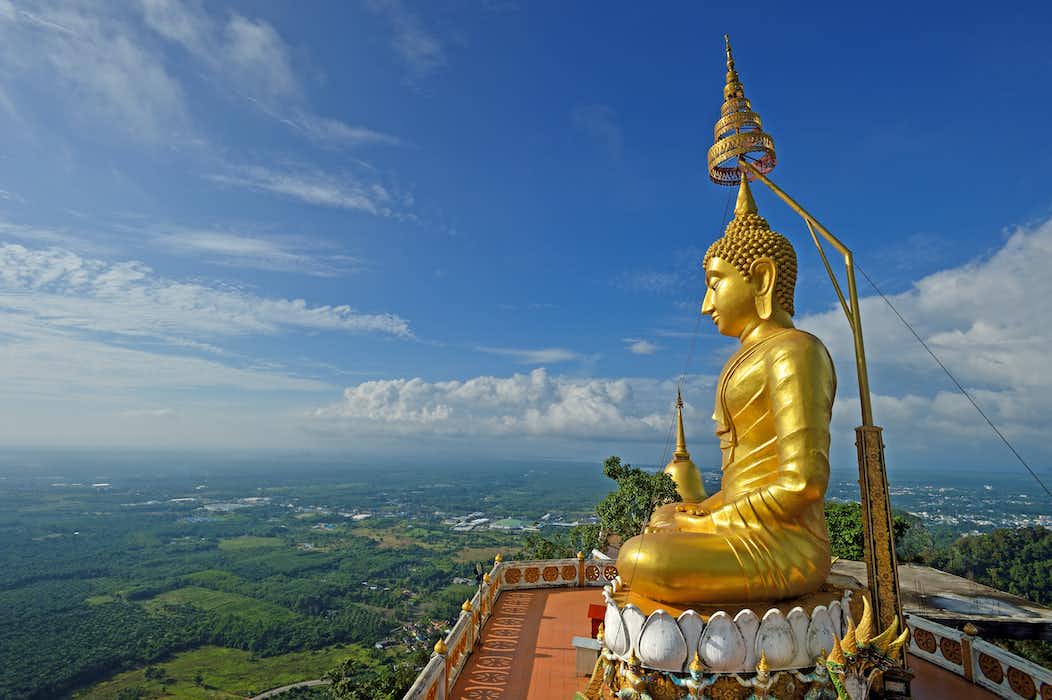 It’s a daunting 1,237 steps to reach this mountaintop temple, but spectacular views are worth it! No one’s quite sure where the name came from, but aside from some tiger-paw shaped markings on the cave walls, you won’t be faced with any giant cats. Monkeys, maybe, but not tigers! Much of your 2-hour visit is spent on the climb, so be sure to have appropriate clothing, footwear, and water bottles!

Krabi is one of Thailand’s most popular destinations, and with good reason. There’s miles of white sandy beaches, a massive tropical jungle, and hundreds of surrounding islands.

From diving and snorkeling to kayaking and caving, there are plenty of water-based activities to enjoy in Krabi. Temples, rainforests, markets and nightlife await on dry land, so you might want to spend a few nights here to make the most of Krabi.

Book a car from Surat Thani to Krabi

Once you’ve seen all Krabi has to offer, head to Khao Sok. It’s not a city, not an island, and not a beach town. Rather, it’s a National Park and one of the most biodiverse places on the planet! 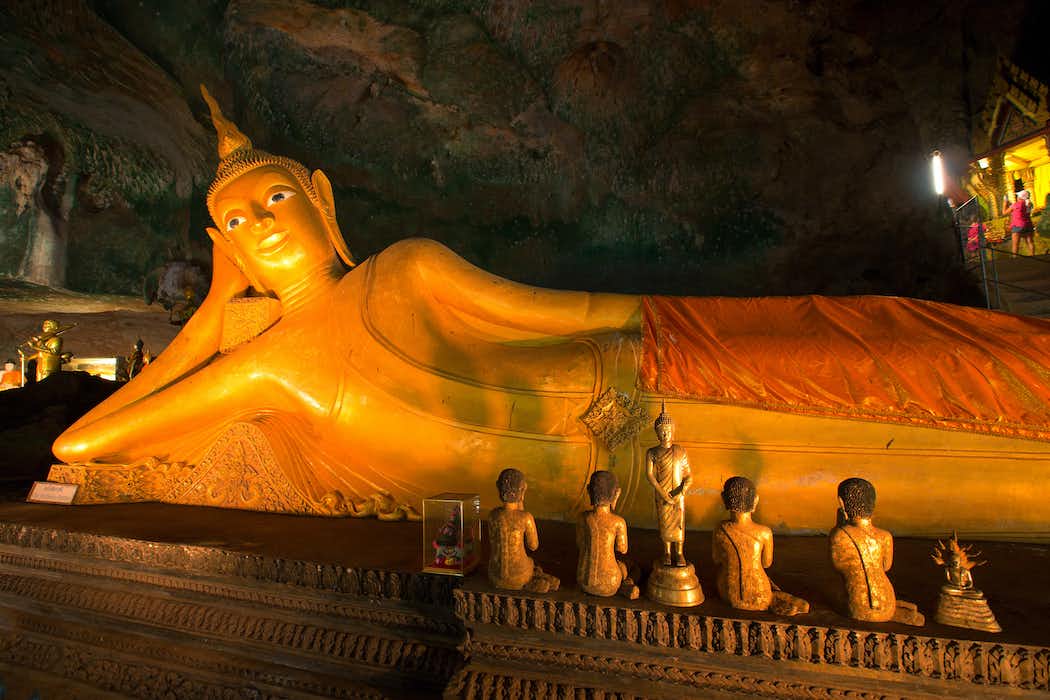 Take an hour to step inside what locals simply call “the cave temple”. Within the cavern, you’ll be surprised to find a giant, 15-meter-long golden reclining Buddha. After contemplating the Buddha, head to the wide stairway at the end of the cave. It’ll lead to a lookout where you’ll get some fantastic views of the jungle. 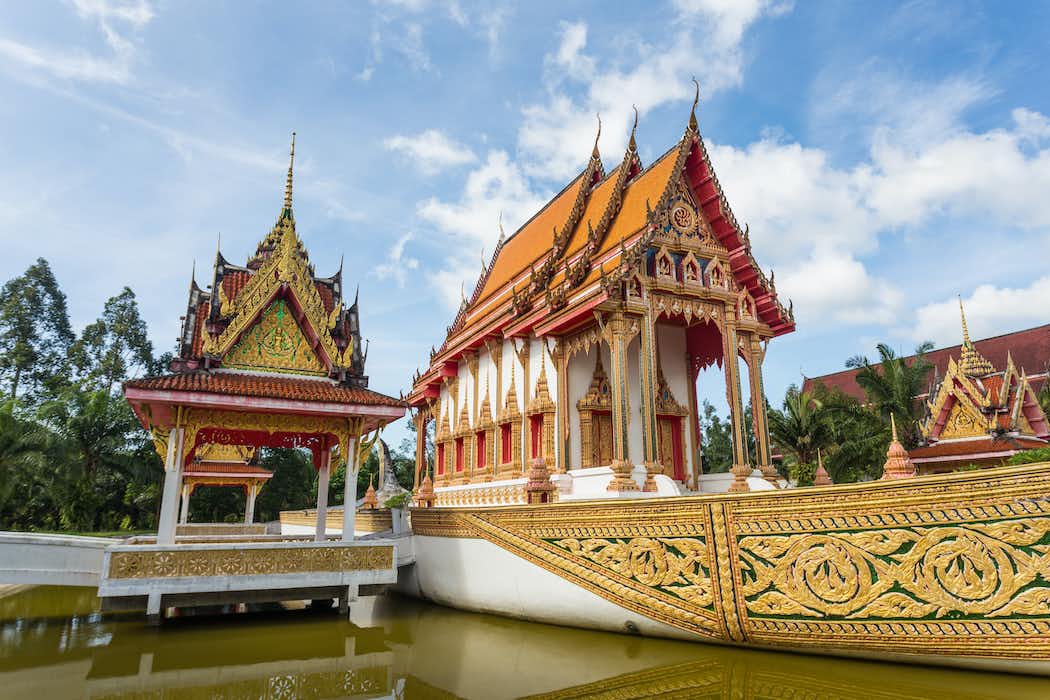 This (still active) hilltop temple offers amazing architecture and views to match. Spend 90 minutes wandering among the ornately decorated temples -one’s even being built on a boat! And don’t miss the 109-meter-tall chedi. It houses relics of the Buddha, and the foundation stone was laid down by the Queen of Thailand herself!

Okay, so Khao Sok National Park isn’t exactly on the coast, but you can’t not visit it when you’re in Thailand. Honestly, we’d say it’s one of the most beautiful National Parks on the planet. And it’s not just beautiful. Khao Sok is home to the world’s oldest evergreen forest, and is more biodiverse than the Amazon.

Any lover of the great outdoors will fall head over heels with Khao Sok. A boating adventure on the magnificent Cheow Lan Lake showcases the park’s dramatic landscape, and the trekking opportunities here are second to none. It’s once you get into the jungle that you have the chance to spot some of the park’s famous wildlife, including elephants, bears, leopards, and rare birds. There’s a number of different stay options, so we recommend planning your visit in advance.

Book a car from Krabi to Khao Sok

After a tranquil retreat in Khao Sok, it’s time for the final day of your Gulf Coast itinerary with Daytrip. Today, you’ll drive to Phuket, one of Thailand’s busiest, bustling tourist destinations. 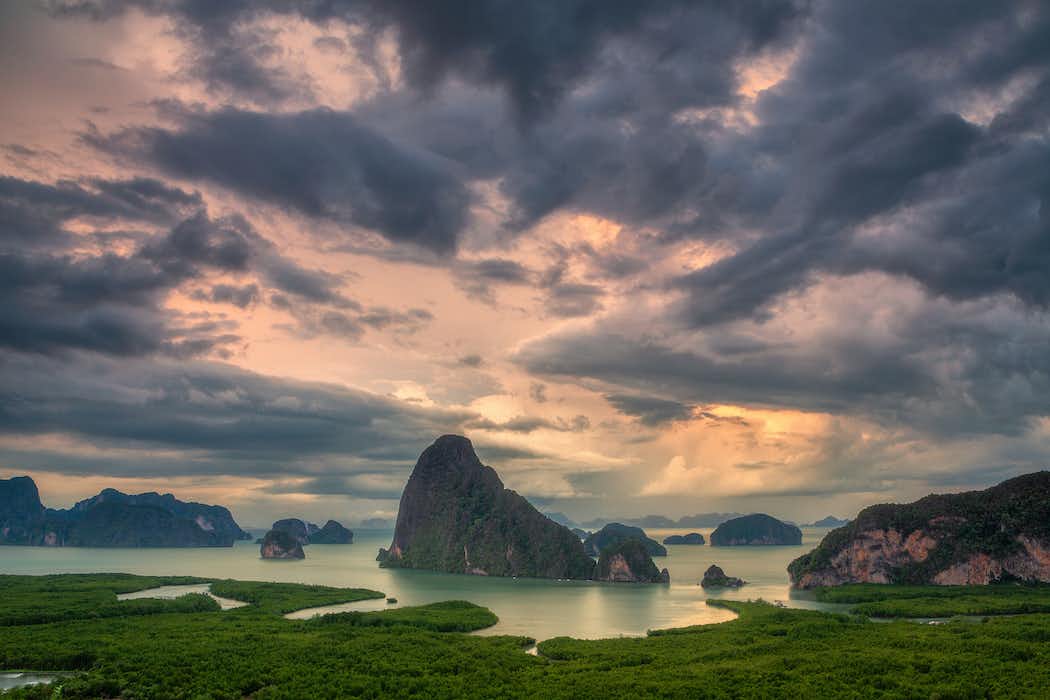 The limestone karst islands rising above Phang Nga Bay make this one of the best photo ops in Thailand. While you can make your 45-minute visit anytime, people start showing up as early as 4:00AM to catch the breathtaking sunrise. Or even stay after dark for views of the Milky Way. 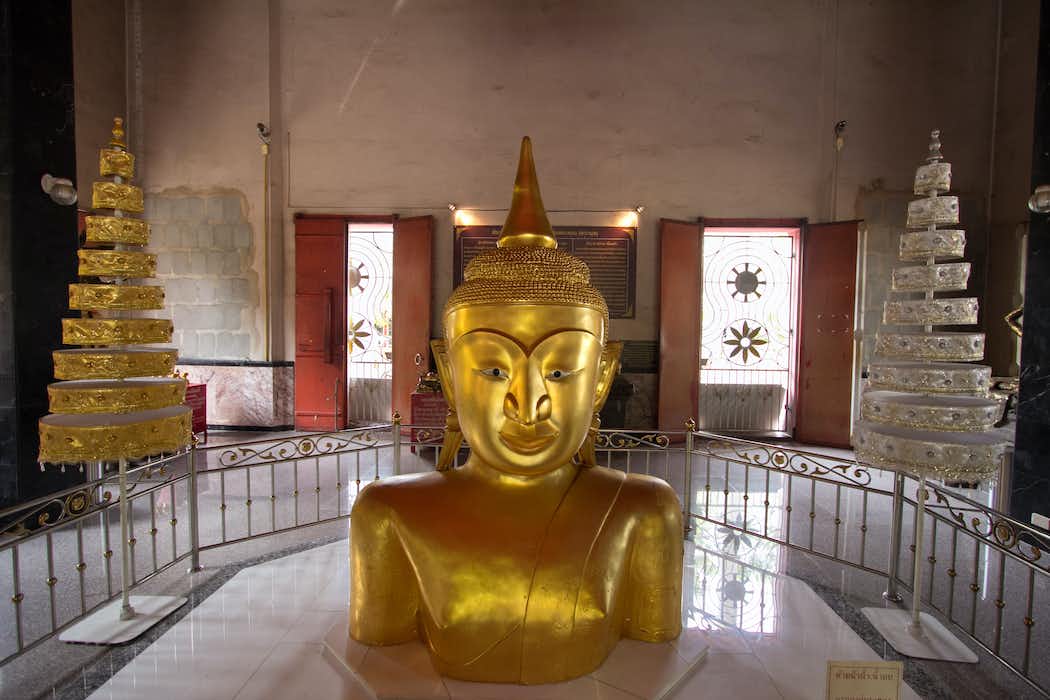 One of the oldest and largest temple complexes in Phuket, Wat Phra Thong is surrounded by superstition. On your hour-long visit, you’ll notice that only half of the golden Buddha statue is visible. This is because according to local legend, anyone who has tried to uncover the rest of the statue has died or been attacked by ants and wasps. That’s right – this temple was build around a centuries old, potentially cursed Buddha statue. Don’t worry though – the mystical Buddha is fenced off for visitors’ safety! 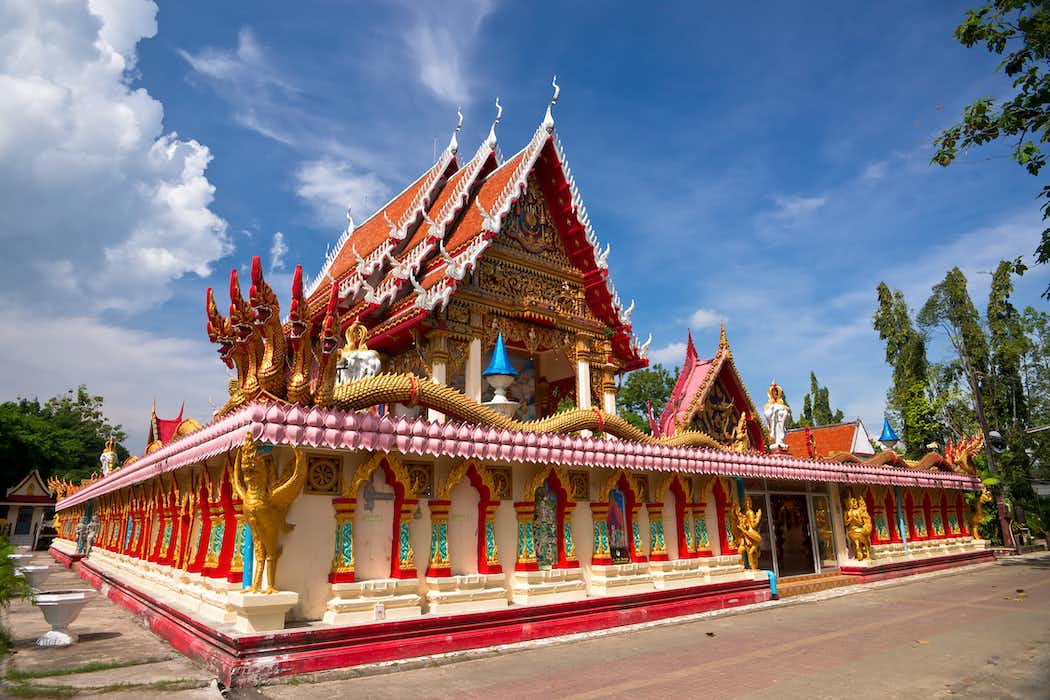 Built over 500 years ago, Wat Phra Nang Sang is Phuket’s oldest temple. And it’s fair to say it’s also the quirkiest! Locals affectionately call it the ‘Messy Temple’ because of the constant additions of buildings, statues, and artwork. Walk around for 45 minutes to take in all the eye-popping colors and designs.

The rainforested, mountainous Phuket is Thailand’s largest island. And it’s also home to some of the country’s most popular and frequented beaches. Between high-end beach resorts and budget hostels, there’s accommodation for everyone on offer depending on your budget and preference.

A wild nightlife lines Soi Bangla Road and only a stone’s throw away sit some of the most relaxing and tranquil beaches you’ll find in the country. Go see the 45 meter high Big Buddha, visit the elephants at one of many sanctuaries and don’t miss the chance to take a boat trip to a nearby island such as Koh Phang Nga or Koh Phi Phi (famed for being the deserted beach of the movie ‘The Beach’).

Book a car from Khao Sok to Phuket