Costa Rica may be small, but it’s the jewel of Central America. Rainforests, cloud forests, volcanoes, and mountain ranges cover the country. And thanks to two coasts, loads of beaches. Costa Rica is also one of the safest countries in Central America to visit.

Divided into almost 30 national parks that are home to exotic wildlife and marine species, this tiny country holds around 5% of the earth’s biodiversity! Daytrip’s door-to-door car service makes it easy to enjoy a round-trip adventure along the Pacific Coast. We’ve put together an itinerary showcasing as much of Costa Rica’s nature as possible, so you don’t have to worry about figuring out bus schedules or finding local taxis. You’ll see way more than on just the trip from San Jose to Monteverde most tourists make. Though of course, we’ll bring you there too. 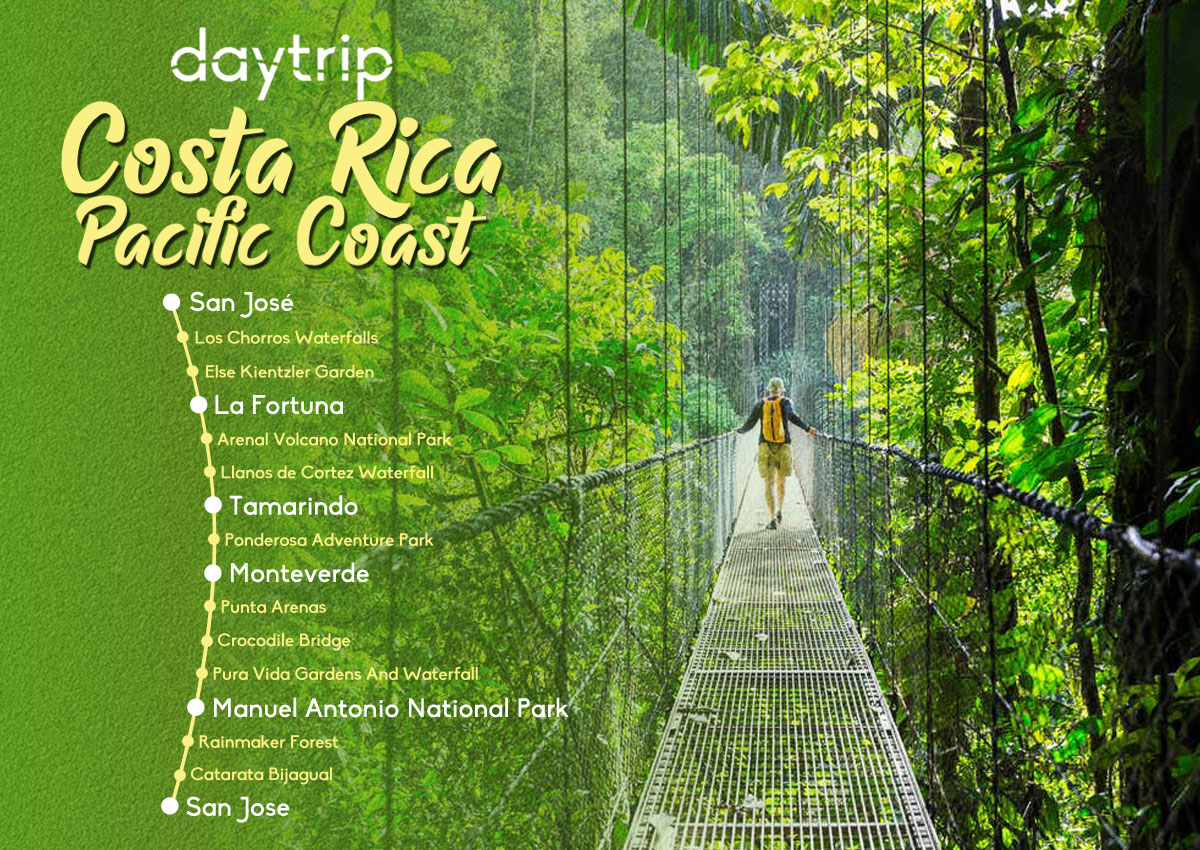 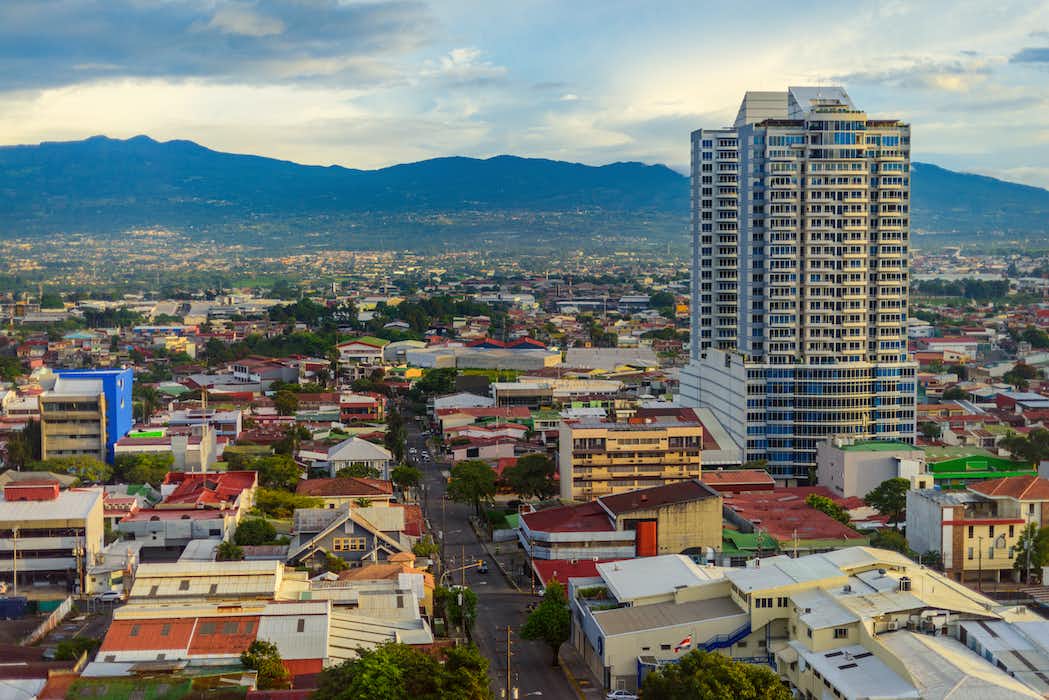 San Jose, Costa Rica’s vibrant capital, is a good place to get acquainted with Tico life. Relax in the Parque Metropolitano La Sabana before grabbing some local grub. While you’re in town, stop at some of the city’s museums. The Museo del Oro Precolombino (Pre-Columbian Gold Museum) is especially interesting since people often overlook the country’s past. 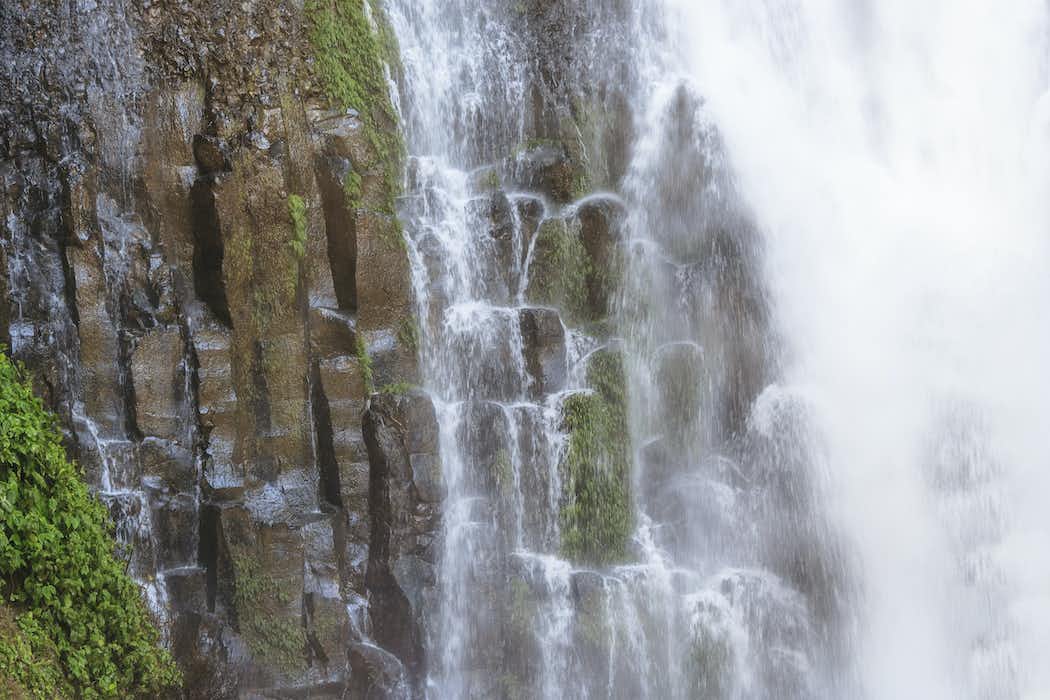 Costa Rica is packed with waterfalls, and the small but might Los Chorros (“The Jets”) a perfect starter for a 90-minute excursion. Just a short walk through the jungle leads to the powerful, 40-meter-high cascade. For a bit more adventure, follow the riverbed into a moss-covered canyon to find an even larger waterfall! 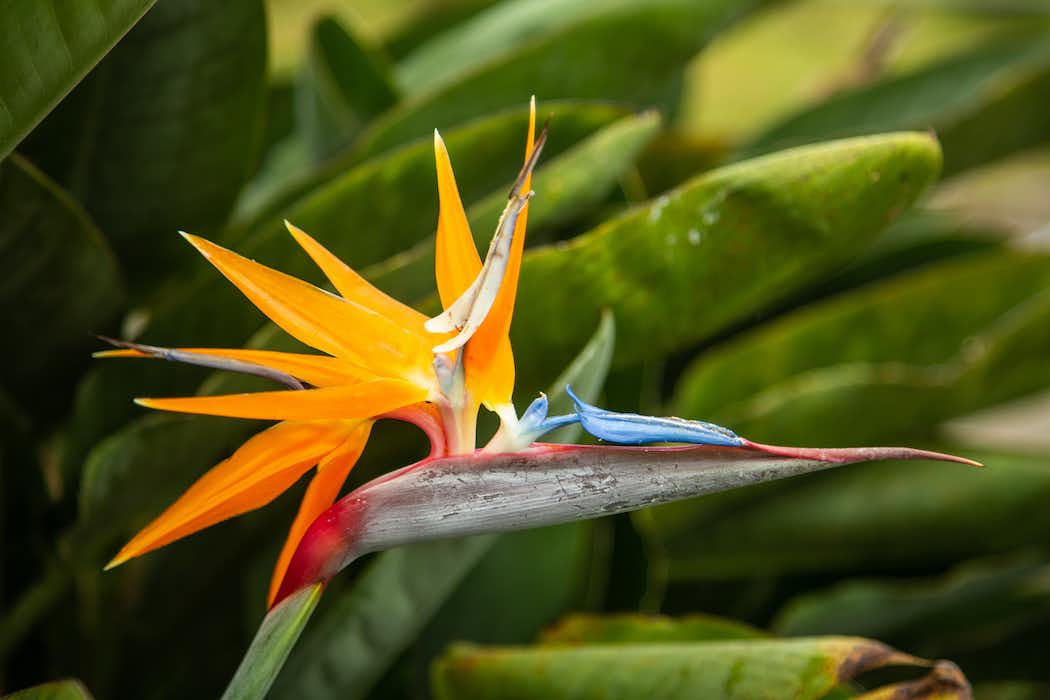 Just 2 hours at the Else Kientzler Garden will expose you to over 2000 tropical plants from as far away as Japan and Madagascar. Keep an eye out for toucans and parrots as your pass between rare orchids, endangered hardwoods, and fruit trees you can eat from!

La Fortuna is a glorious green escape from the city with outdoor adventures aplenty. From volcanoes to waterfalls, jungle bridges to swimming springs, there’s plenty to keep you busy in and around La Fortuna.

The Arenal Volcano creates a dramatic backdrop, and lush rainforest surrounds the town. You can literally walk an hour walk from the center to the magnificent 75-meter La Fortuna Waterfall. The cool pool at the base of the fall is crisp and clear and ideal for swimming, and cooling off on a hot day.

Book a car from San José to La Fortuna

After enjoying the mountainous Northern Highlands, head from La Fortuna to Tamarindo to bask in the Pacific Coast. 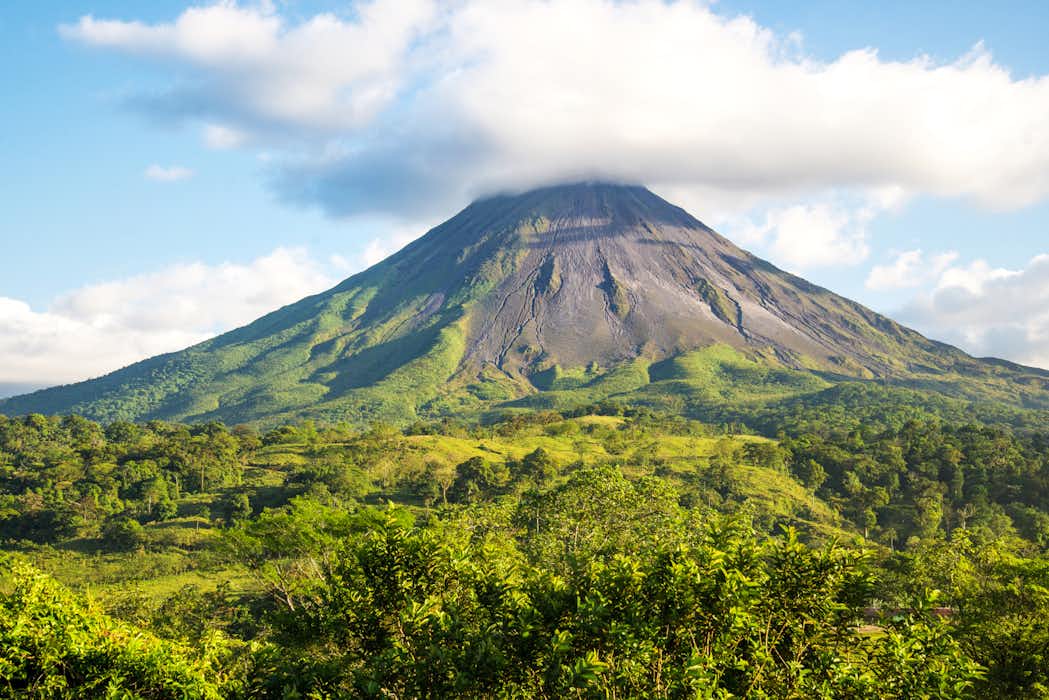 You probably visited the park while you were in La Fortuna, but why wouldn’t you want to have go again?  Nearly all of Costa Rica’s 850 identified bird species can be found here, so see how many you can spot! Stop for 90 minutes walk over hanging bridges in the rainforest or relax in naturally-heated hot spring. 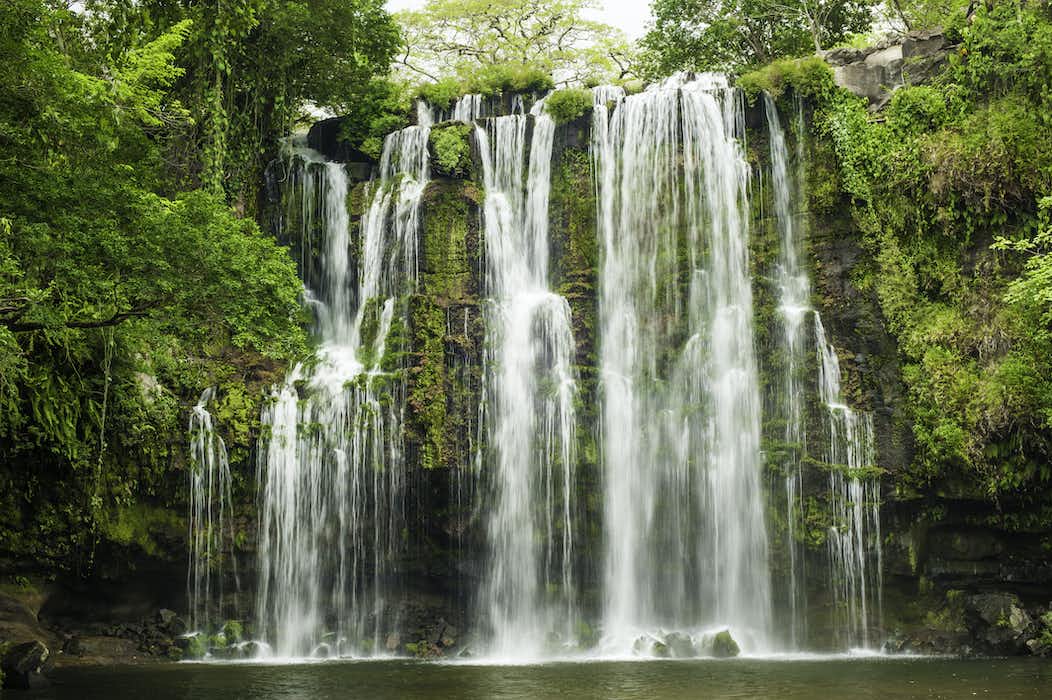 At 12 meters, the Llanos de Cortez Waterfall is far from Costa Rica’s largest, but it’s still one of our favorites. Why? Because you can go “behind the curtain” for a whole new perspective! The surrounding jungle is also great to explore on your 75 minute visit – you might even see the water-walking Jesus Lizard! 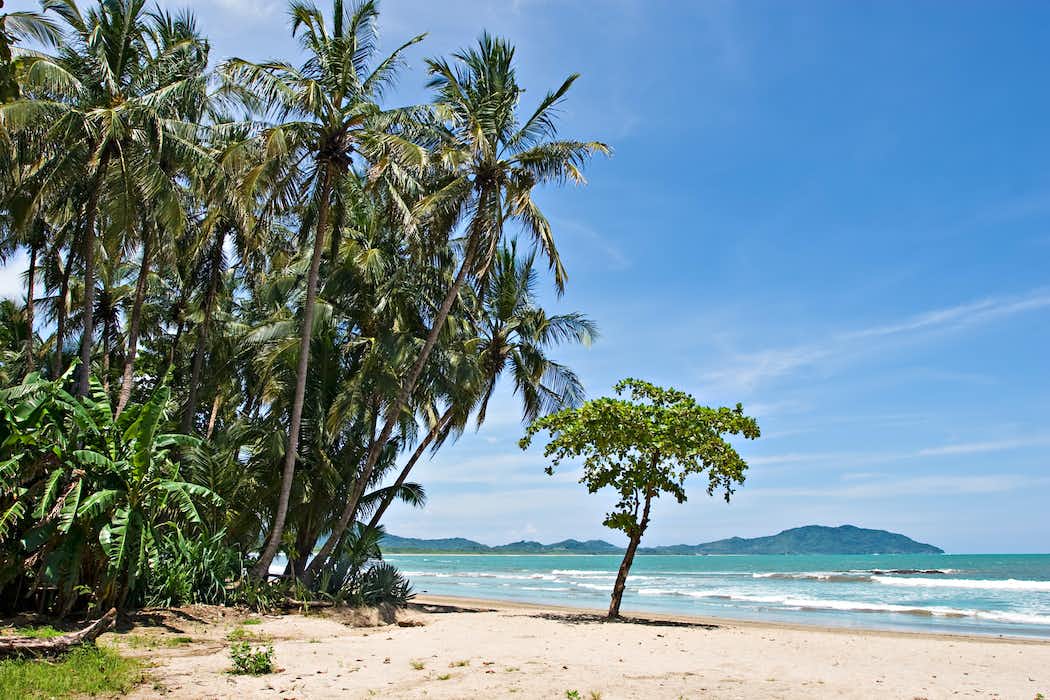 Tamarindo is one of the most popular places in Costa Rica for beach lovers and aspiring surfers. The sunsets are stunning and the waves come in every size. If you’ve never paddled out before, just sign up at one of the many surfing schools for a crash course! The beaches are lined with bars and restaurants offering great refreshments and cuisine after a hard day in the water!

Thrill-seekers are spoiled for choice with the range of zip lines available. This is a quintessential Costa Rican activity! Fly from canopy to canopy in the middle of the rainforest for the perfect birds-eye view to spot birds and native wildlife as you soar through the trees.

Surrounding Tamarindo are various turtle nesting sites on protected beaches. The peak season for nesting is between October and April is amazing to witness. Hundreds of thousands of Pacific Ridley Sea Turtles come ashore to lay their eggs, and after a few months, the hatchlings make their way to back sea.

Book a car from La Fortuna to Tamarindo

After you’ve had your fun in the sun, drive up from Tamarindo to Monteverde. This lush green mountain town is packed with tropical forest, native flora and fauna, so much wildlife and unique cloud forests. 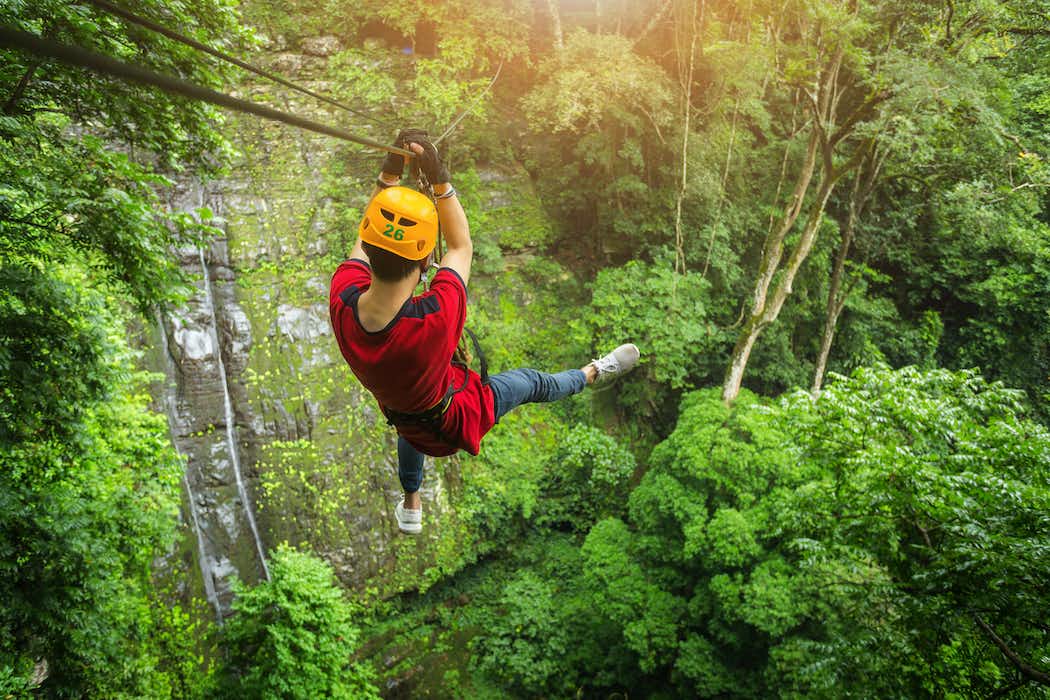 Stop for 3 hours for one of Costa Rica’s most unique adventures. There are staples like ziplines, kayaking, nature trails and waterfalls. But there’s also an African safari, where you’ll see giraffes, endangered bongos, antelopes, ostriches, camels and more as they walk right up to your 4×4!

When it comes to ecotourism, Monteverde is one of the top destinations in the country. An astounding 2.5% of the world’s biodiversity and 50% of the flora and fauna of Costa Rica live in the Monteverde Cloud Forest Reserve. So hit the hiking trails and skywalks to immerse yourself in the forest. Trying to see the  Resplendent Quetzal should be at the top of your list. Monteverde is the best place to see these striking green feathered beauties.

Ziplining is a must in Monteverde – locals say it was invented here! There are several adventure parks around Monteverde, so daredevils rejoice! 100% Aventura boasts the longest zip line in Costa Rica at 1.5km!  If you’re seeking an even bigger adrenaline rush, bungee jump from 143 meters at the Monteverde Extremo Park.

If you need a break after a day spent adventuring, grab a scoop of Monteverde’s famous local ice cream!

Book a car from Tamarindo to Monteverde

Get your head out of the clouds and go from Monteverde to Manuel Antonio National Park for a bit of seaside paradise. 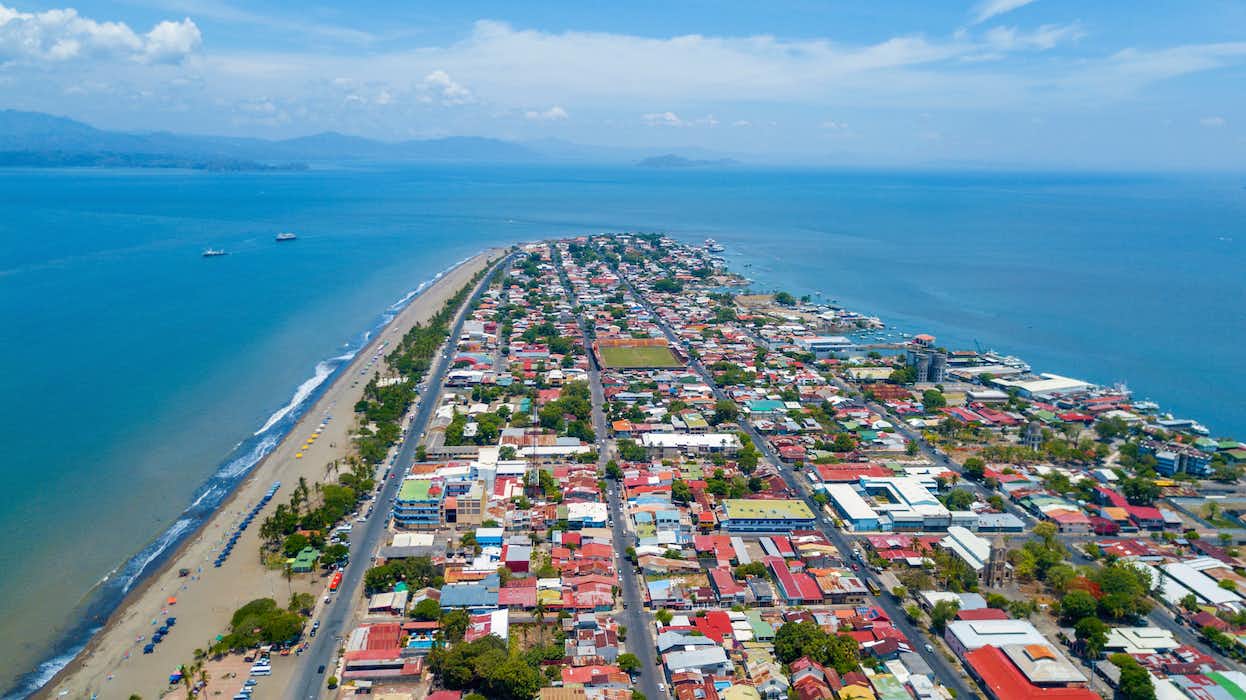 One of Costa Rica’s main ports since the 16th century, Punta Arenas is the perfect place to spend 90 minutes sample some of the country’s most famous products: coffee, seafood, and sun. The dining options are best along the waterfront promenade, not least because of the sea view. 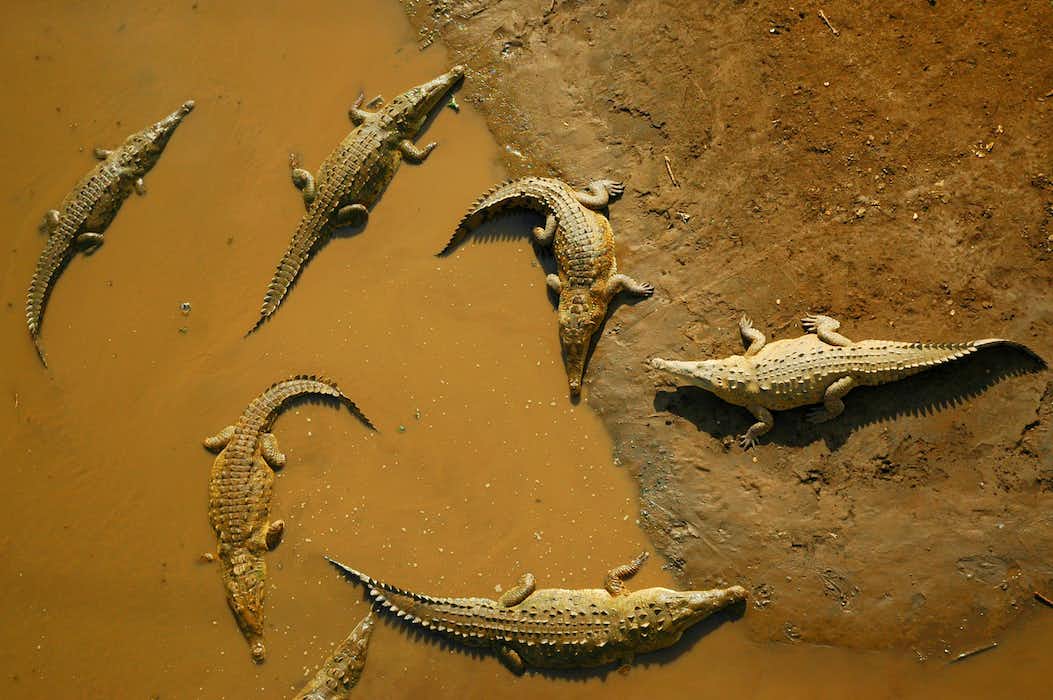 The name is quite self explanatory; this is a bridge with a lot of crocodiles. Stop for half an hour to spot crocs sunning themselves the sandy river bank.

Once the personal backyard garden of David Stannard, Pura Vida has grown into a beloved botanical garden. Take 90 minutes to wander the paths and seek out the viewpoints showcasing the bright blue of the Pacific Ocean and verdant tropical rainforest. There’s an on-site restaurant if you’d like to relax more at this beautiful location. 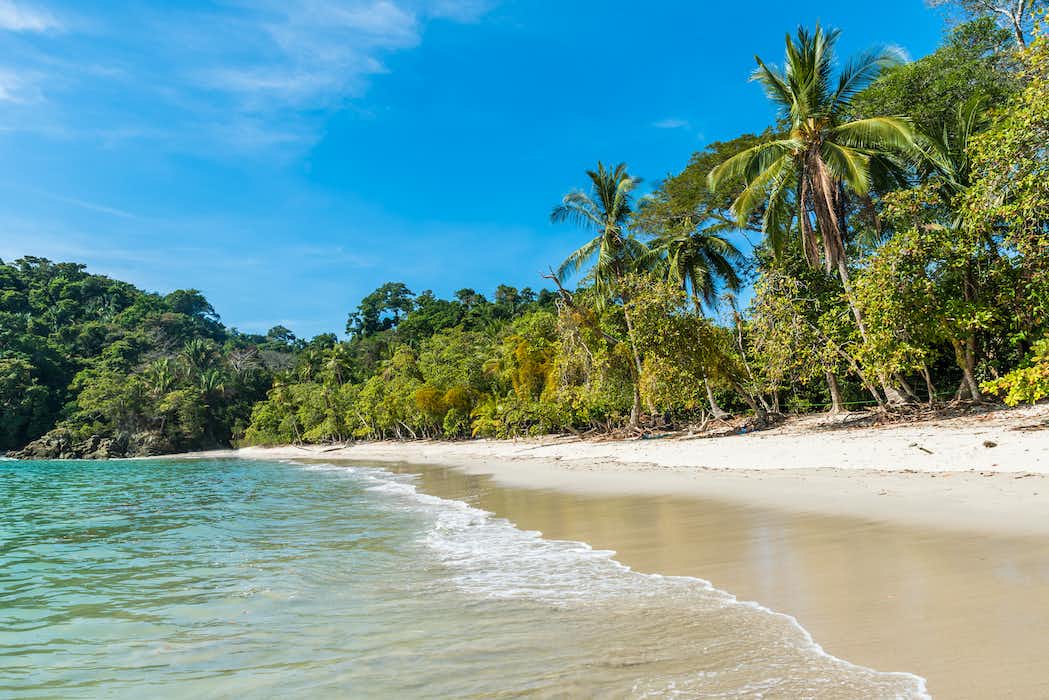 Manuel Antonia may be Costa Rica’s smallest National Park, but it spans rain forest, beaches and coral reef. The verdant forest leads to what can only be described as one of the worlds most stunning beaches. Expect to see sloths, monkeys, iguanas and more as you explore Manuel Antonio.

Adrenaline junkies will be spoiled for choice. Off-road touring, parasailing, canyoneering and rappelling are all sure to get your heart pumping. Water lovers can choose from jet skiing, waterfall walks, rafting or the beautiful beach. And there are options including a wildlife sanctuary, crocodile tours and jungle tours for nature enthusiasts.

Accommodation options range from eco-lodges to luxury resorts and five star hotels. And they’re all conveniently located on the road between the park and the nearby bustling town of Quepos.

Book a car from Monteverde to Manuel Antonio National Park

After enjoying a bit of paradise, it’s time to head back from Manuel Antonio to San Jose. But don’t worry – Costa Rica still has a few tricks up its sleeve! 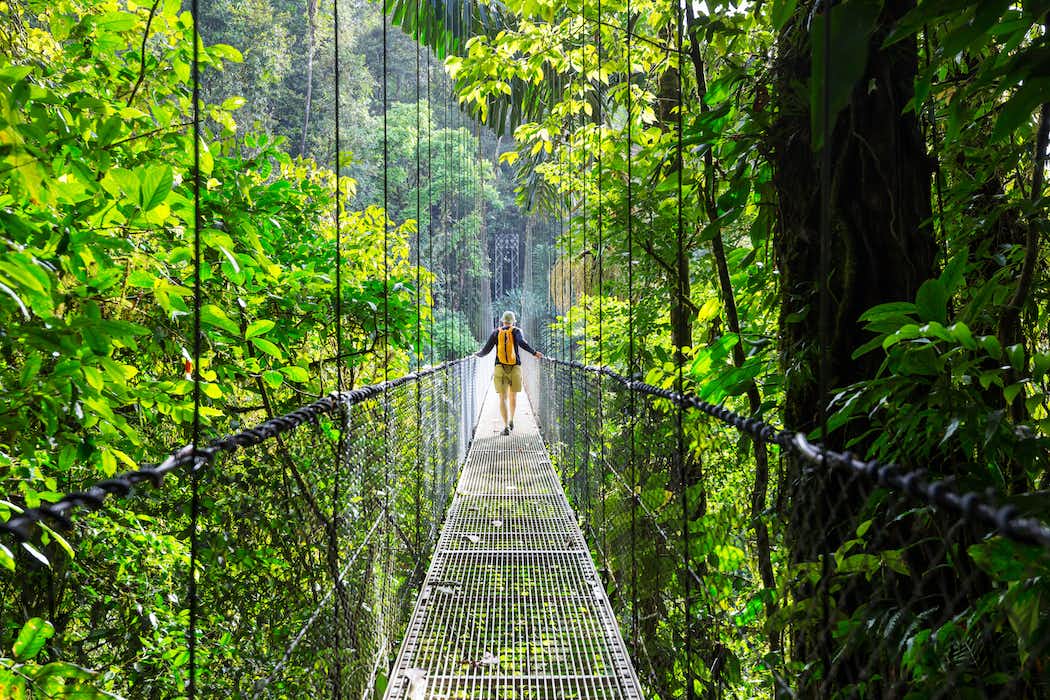 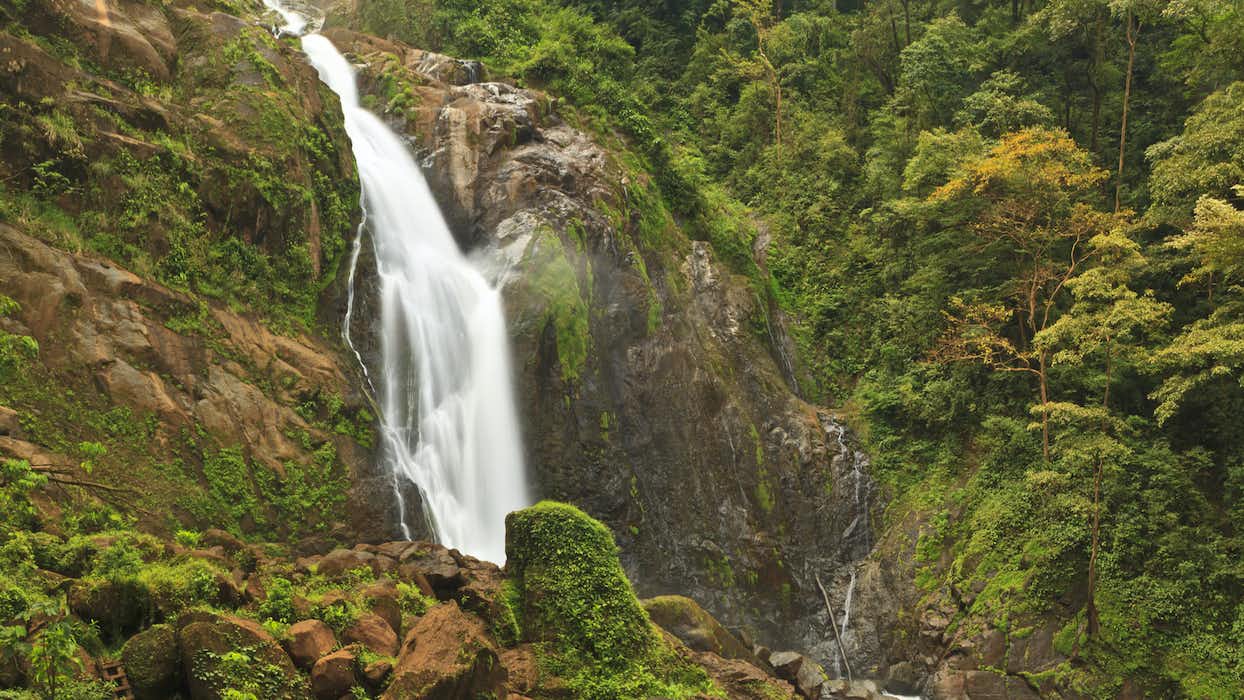 Dropping 183 meters, Catarata Bijugual is one of Costa Rica’s tallest waterfalls. But thanks to its remote location, it’s relatively empty.  On your 2-hour stop, you’ll have plenty of time to admire the falls and have the chance to see all kinds of wildlife. It takes around an hour to get there, so you earned a dip in the cool water!

Back in San Jose, you’ve still got plenty of things to do.

Central Avenue in downtown San Jose is a great starting point. Many theatres and museums in the area showcase the best in Costa Rican culture. If you didn’t when you first arrived in San Jose, check out the National Museum (in a former fortress), the Pre-Columbian Gold Museum and the National Theatre of Costa Rica.

The Central Market is the place to be for traditional food and souvenir shopping, while the Municipal Craft Market is home to artisans selling handcrafted goods.

Here’s each leg of the trip! And If you’re looking to continue your Costa Rican experience, check out the the laid-back vibes of the Costa Rica Caribbean Coast.