In a country renowned for its design and engineering, it’s not easy to name a “most influential” movement, but the Bauhaus might come close. Affordable housing, built-in kitchens, functional and affordable furnishings. These are all things that came from German Bauhaus and Modernism.

Set off on a 4-day journey to experience the revolutionary work of the Bauhaus and early 20th century designers. You’ll see the buildings that transition architecture into the modern age, and no shortage of functional white buildings and UNESCO World Heritage Sites. And to break things up, you’ll see plenty of beautiful Old World architecture.

Your Bauhaus and Modernism in Germany Itinerary 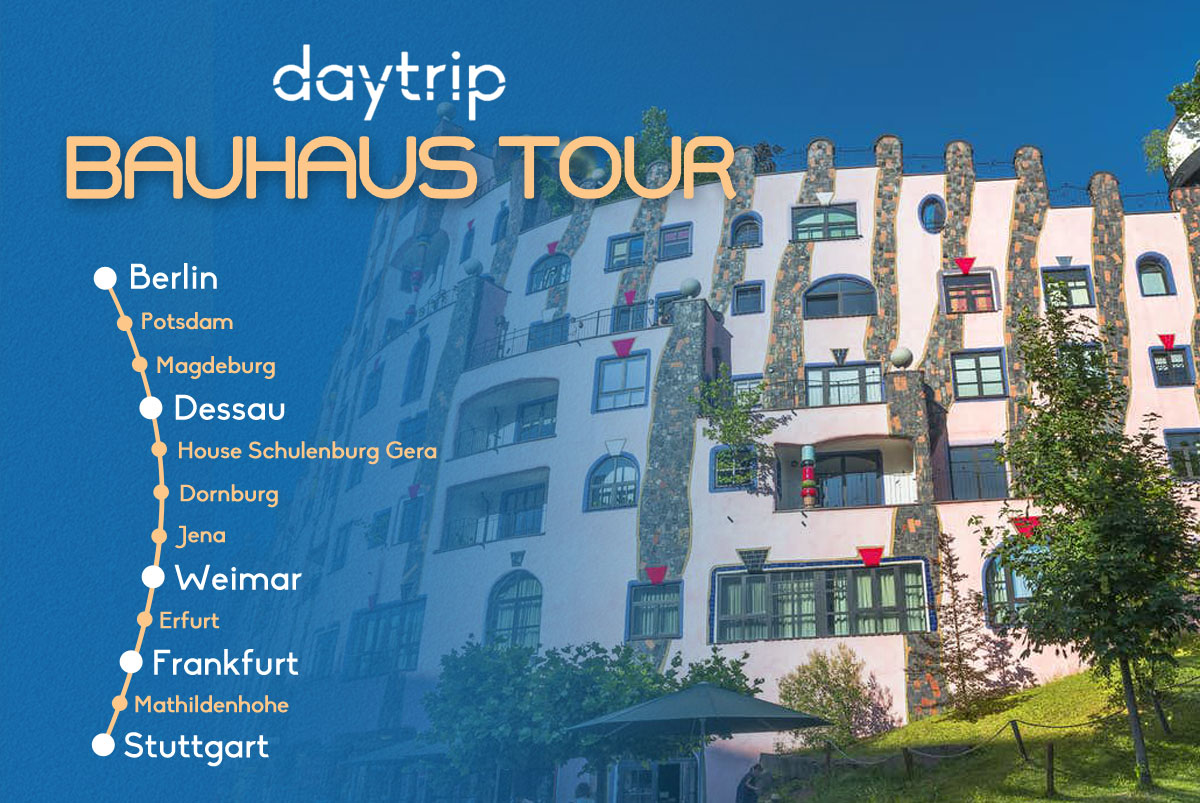 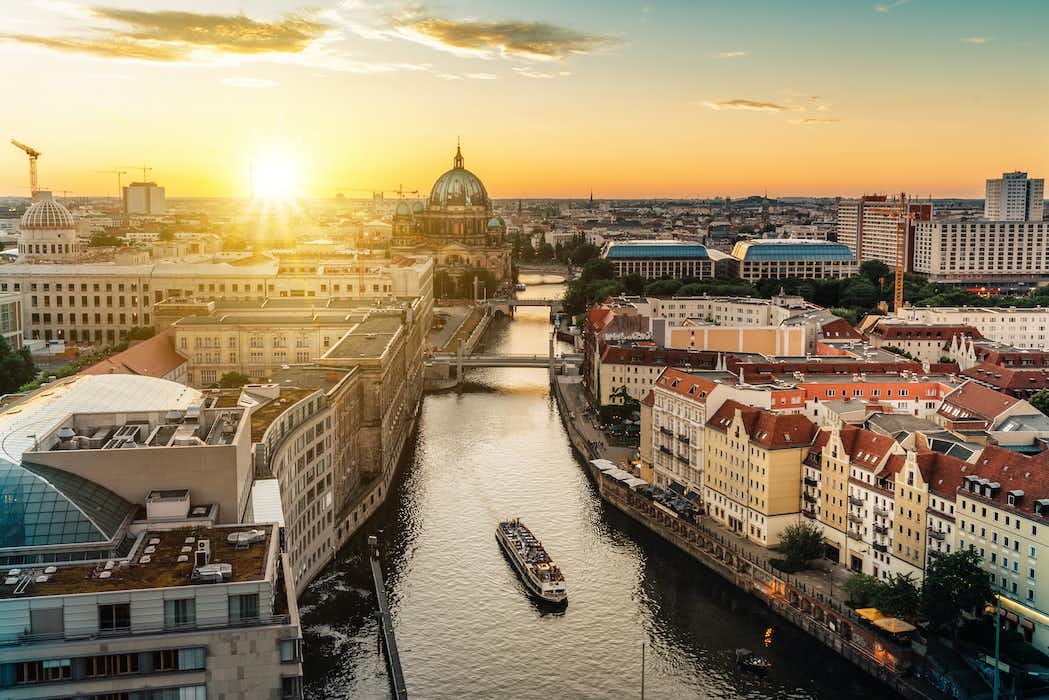 It would be easy to spend your whole holiday just exploring Germany’s ultra-hip capital. Heck, David Bowie’s time here changed his entire life. There’s the Berlin Wall and its graffiti-covered East Side Gallery. The Brandenburg Gate and nearby Reichstag with its glass dome are national icons. Museum Island and its UNESCO-listed monuments could take days an its own.

Along with all the things you “need to do in Berlin”, you’ve got to scratch your Modernist itch! The Bauhaus Archive should of course be at the top of your list. Designed by Walter Gropius and finished posthumously, the white saw-toothed building and its vast collection showcases the the school’s form-and-function ethos.

From there, you’ve got Le Corbusier’s Unité d’Habitation, the Brutalist Velodrom, and the Deconstructivist Jewish Museum. Along with these, there’s the chilling Holocaust Memorial with its 2,711 concrete stelae. And luck for you Modernist-lover, Berlin has a series of early 20th century housing estates recognized as UNESCO World Heritage Sites!

When you’re done with the capital, begin your tour of Bauhaus and Modernism in Germany by heading from Berlin to Dessau.

Potsdam was the pre-World War I residence of Prussian Kings and German Kaisers and is home to the lavish Sanssouci Park and palace, Germany’s largest UNESCO World Heritage Site. But you’re more a fan of modernism you say? Then why don’t you take 90 minutes visit to one of Erich Mendelsohn’s most famous projects: The Einstein Tower! Mendelsohn has ambitiously hoped to make this expressionist tower from pure reinforced, cast-in-place concrete but the technology wasn’t quite there. On top of that, stop to see the 3 villas designed by Mies Van Der Rohe early in his career (though they’re all privately owned and not open to the public)! 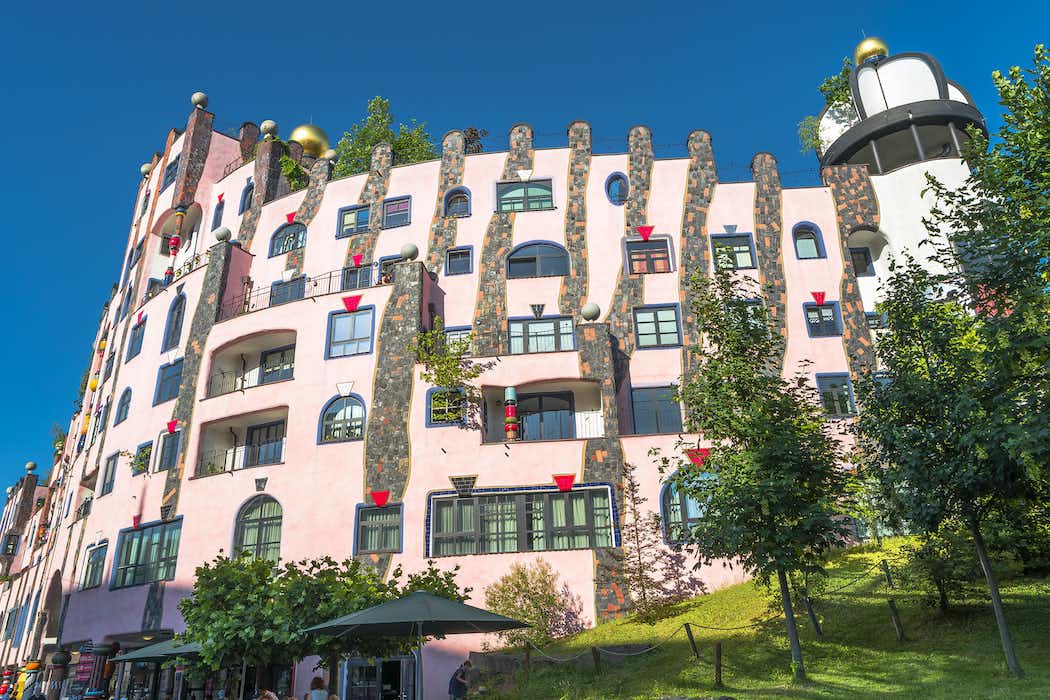 This riverside city is a favorite of medieval lovers, with Germany’s first Gothic cathedral and the tombs of 10th century Holy Roman Emperor Otto the Great. But that’s not why you’re here – you want modern! Well then, check out the contemporary Green Citadel by Friedensreich Hundertwasser nearby! It’s a big, pink, humanist spin on Le Corbusier’s “radiant city”. On the riverbanks opposite are the city’s two best-kept secrets for lovers of New Architecture. The Hermann-Beims-Siedlung housing project, built between 1925 and 1929, provided functional affordable housing for the growing city. And the nearby Magdeburg Civic Hall was built to impress visitors to the 1927 German Theatre Exhibition. Pay attention to the Pferdetor, or Horse Gate, which was inspired by the Wedding Tower in Darmstadt (you’ll be visiting this later). 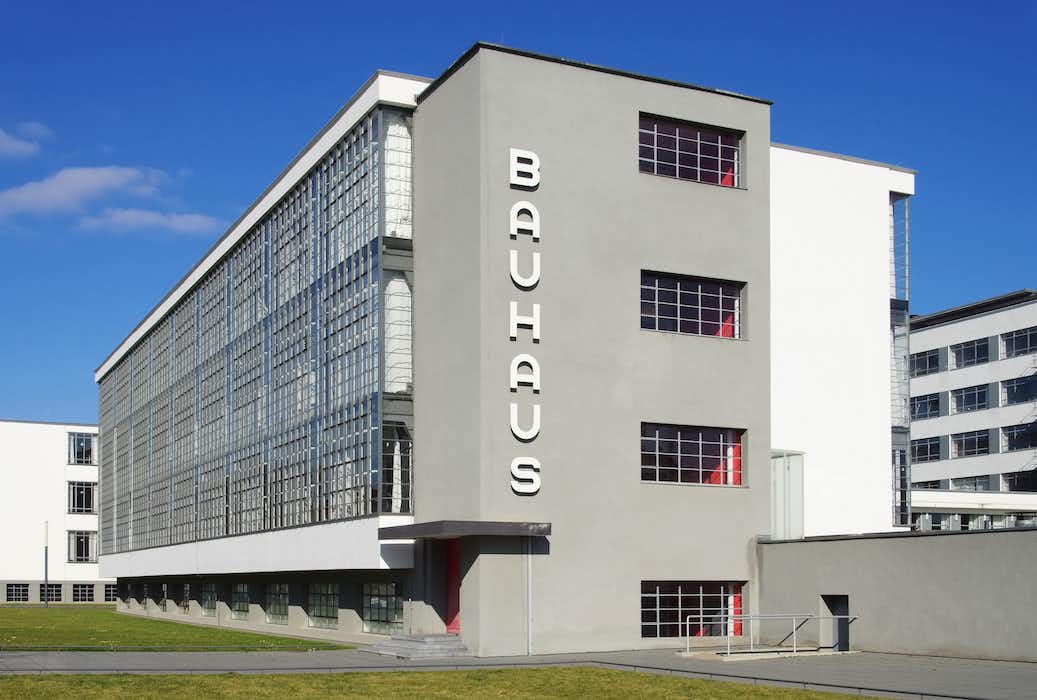 You already know why you’re in the medieval town of Dessau. It’s not for the many castles, palaces, and gardens (though you should visit at least one of the sites in the UNESCO-listed Garden Kingdom of Dessau-Wörlitz). No, you came for the Bauhaus school.

Walter Gropius’ iconic, propeller-esque campus is where the magic happened between 1925 and its forced closure by the Nazis in 1932. Wander through the Bauhaus building to experience Gropius’ flowing, functional design firsthand. You can also step into the classrooms and offices (including Gropius’) to see Bauhaus designs in context.

Nearby, the restored Masters Houses offer a glimpse into the private lives of some of the biggest names in Modern design. The Kandinsky/Klee House is particularly special for its colorful accents. If you need a refreshment during the hot summer months, keep an eye out for the Kiosk across from the Master’s Houses. Embedded in a white garden wall, it was the only building realized by Mies van der Rohe during his tenure as Bauhaus director. Due to its popularity, you’ll want to book your tickets in advance (especially for the English guided tours, which are only on Fridays at noon).

Surprisingly, the Bauhaus Building itself had relatively little exhibition space. But fortunately, the Bauhaus Museum, opened in 2019, has corrected the showcase shortage. Now, the shiny Miesian box boasts the second largest collection of Bauhaus objects in the world (you already visited the largest in Berlin)!

At some point, you should have a meal (or at least coffee) at the Kornhaus. Designed by Carl Fieger in 1929–1930, this restaurant overlooking the Elbe is one of Dessau’s most iconic Bauhaus buildings.

Book a car from Berlin to Dessau

When you’re done schooling yourself on the Bauhaus, travel from Dessau to Weimar, the birthplace of Bauhaus.

Stop for 45 minutes to explore architect and designer Henry van de Velde’s House Schulenburg Gera. Designed as a “Gesamtkunstwerk”, a complete work of art, van de Velde planned every aspect of the building, interior and gardens so that the entire estate worked together harmoniously. This approach would later inspire the Bauhaus Movement of architecture. Inside, you’ll also find the Van-De-Velde Museum, which showcases the designer’s book designs, original furniture, fabric patterns and other works. 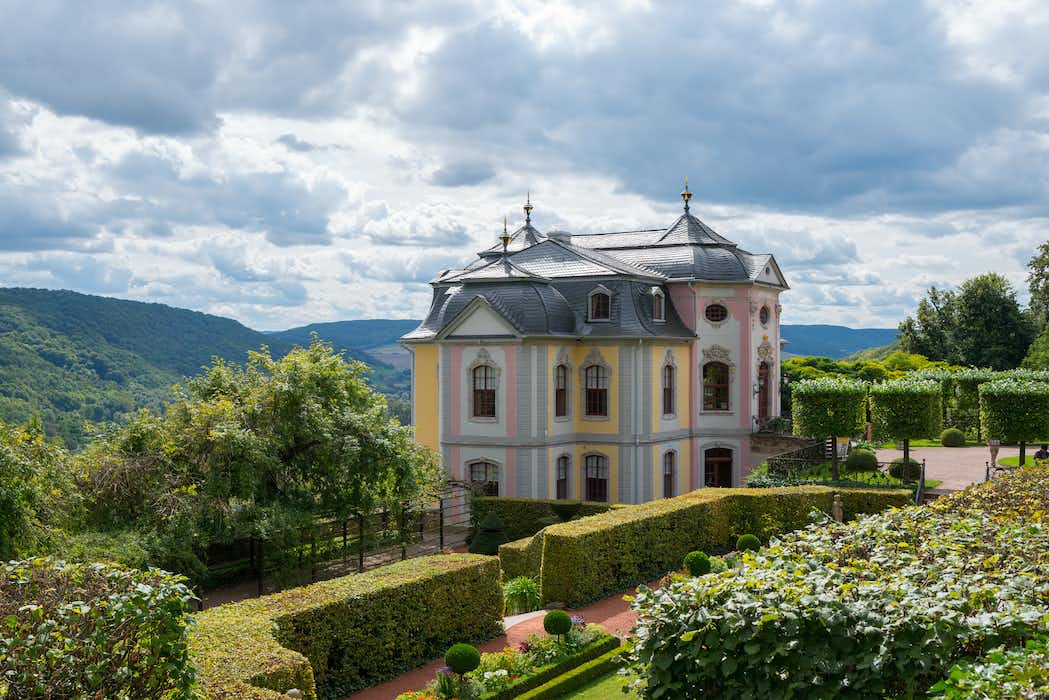 Three beautiful castles connected by a single garden. Why’s this on a Bauhaus tour? Well, step into the 18th century horse stables during your 45-minute visit and you’ll see. It’s here that Walter Gropius established a ceramics school in 1920. This still-operating studio is the last Bauhaus workshop still in its original location. So stop by to see works produced by the works shop, and learn more about its history in a doubly-significant setting. 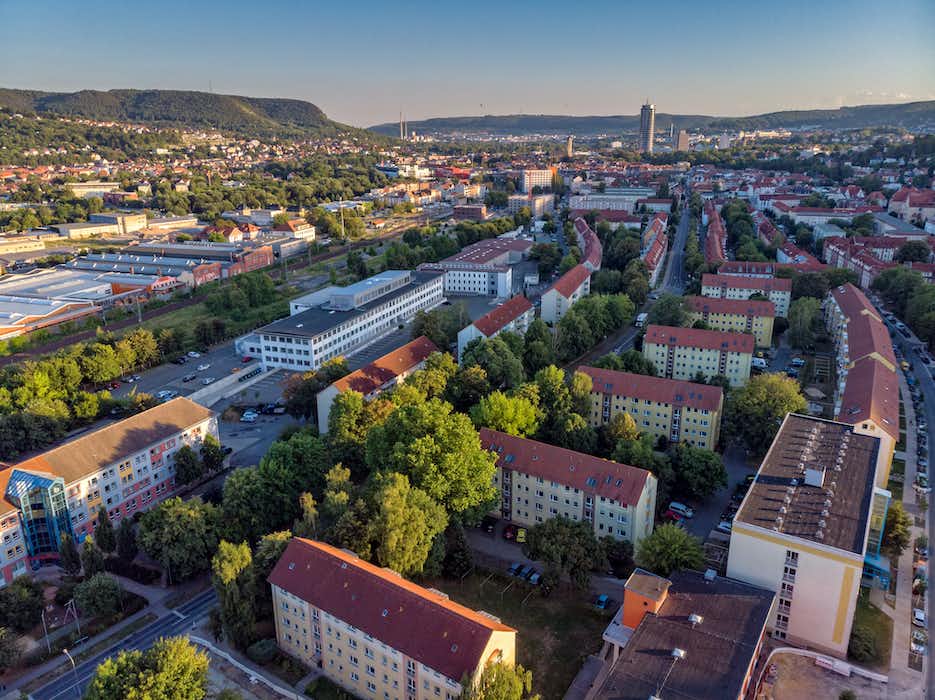 In the heart of Germany’s “green belt”, at first glance Jena just seems like a “nice” city. There’s plenty of parks, and medieval monuments still dot the streets. On your 60-minute visit, you’ll find it’s also an important part of Modernist and Bauhaus history. The Zeiss Planetarium Jena is the world’s longest operating planetarium, and its thin-walled dome that represents true a milestone in the history of building construction. On your way to the planetarium, be sure to pass in front of the Walter Gropius designed Haus Zuckerkandl at Weinbergstraße 4. And you’ll also want to see Haus Auerbach, where Gropius put together all the significant characters of the “New Building” for the first time. Though it’s a private residence, you can contact the owner to request a visit!

In the 18th and 19th centuries, Weimar was considered the cultural center of Europe. Goethe, Friedrich Schiller, Bach, Liszt and Lucas Cranach all lived here at some point. And its Old Town still has that stately air – 12 of its mainly baroque buildings make up a UNESCO World Heritage Site.

Just outside the Old Town, the Bauhaus Museum, opened on the 100th anniversary of the school’s founding, showcases objects from Walter Gropius’ original collection. The museum then connects these  influential designs to contemporary living.

Nearby, the Neues Museum offers a look at Weimar history leading up to the Bauhaus. The exhibits cover everything from Nietsche to early Modern art from the Weimar School to Gesamtkunstwerk design. The large museum workshop is especially fun, letting you try your hand at trades ranging from bookbinding to woodworking

Literally across the park from Franz Liszt’s house is the Haus am Horn. Designed by Georg Muche, this pioneering “white cube” hosted the first Bauhaus exhibition in 1923. Today, the UNESCO-listed “test house” has been restored and refurnished to show visitors its original vision of contemporary living.

For a deeper look at the work of Henry van de Velde (you saw his designs in the Neues Museum), visit the Haus Hohe Pappeln. His family home, built as a Gesamtkunstwerk, is an important bridge between Art Nouveau and Modernism.

Book a car from Dessau to Weimar

After taking in centuries of heritage, make your way from Weimar to Frankfurt for some hidden Modernist gems. 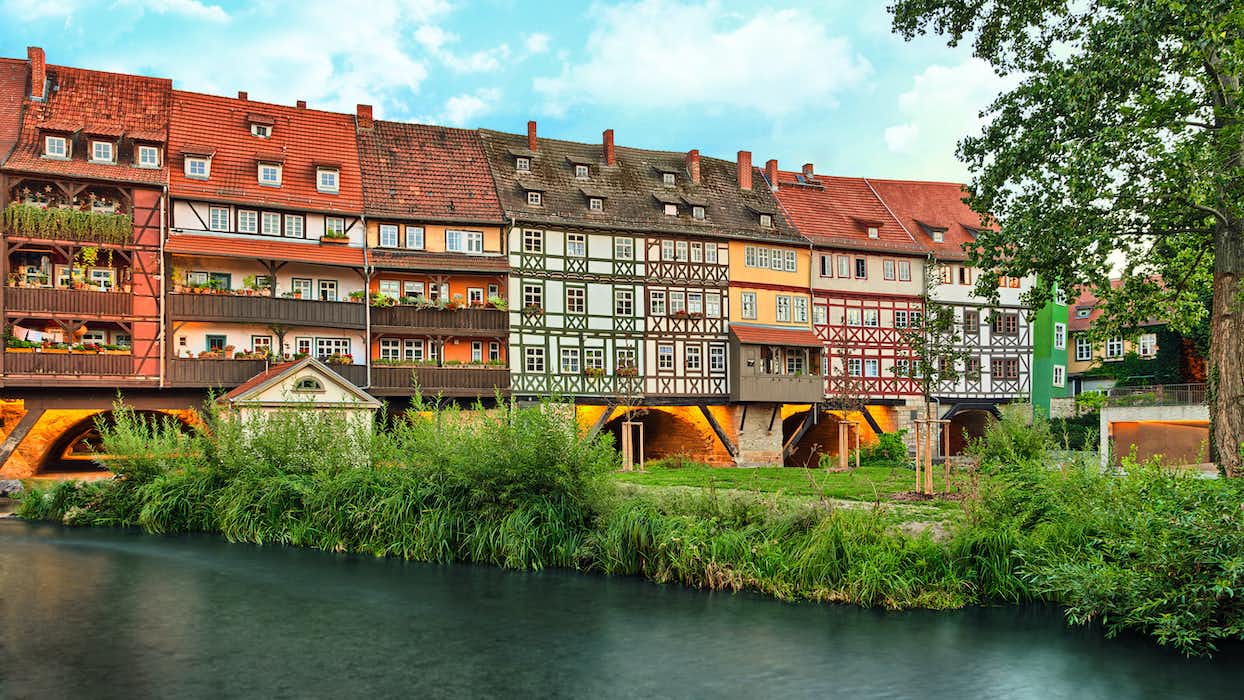 Nicknamed ‘Thuringia’s Rome’ for its half-timbered houses and renovated Renaissance buildings, romantics love charming little Erfurt. Stop for 90 minutes to explore its compact historic center. Scattered among the romantic streets are some prime Bauhaus buildings such as the Schellhorn Haus. Then head to the Margaretha Reichhardt Haus in the city’s outskirts to see the works of one of the most important disciples of the Bauhaus weaving school. Even after her death, her workshop remains in use!

Germany’s financial center mixes modern cosmopolitan living with plenty of history. The standard tourist trail leads you to the picturesque Römerberg square, Goethe’s house. And the spectacular Gothic cathedral where the Holy Roman Emperors were coronated. But aside from the glittering “Main Tower”, the city’s Modern architecture is often overlooked.

First, visit the Frankfurt Museum of Applied Art. The Corbusier-inspired building, designed by Richard Meier, is an attraction in itself. Within the airy galleries, you’ll find textiles, paintings, furniture and porcelain from the past 1000 years from around the world. The adjacent Villa Metzler puts these into context, with different rooms being fully furnished in a variety of styles.

Afterwards, head north to the Römerstadt Estate, part of the revolutionary New Frankfurt housing development program. Headed by architect and city planner Ernst May, the project resulted in 12,000 groundbreaking affordable apartments. To see what they were like inside, visit the Ernst-May-House. This little museum showcases the famous “Frankfurt Kitchen”. Designed in 1926 by Margarete Schütte-Lihotzky, Austria’s first female architect and Nazi resistance member, the “housewife’s laboratory” was the first example of a built-in kitchen.

Book a car from Weimar to Frankfurt

Once you’ve found all of Frankfurt’s hidden Modernist monuments, set out from Frankfurt to Stuttgart. 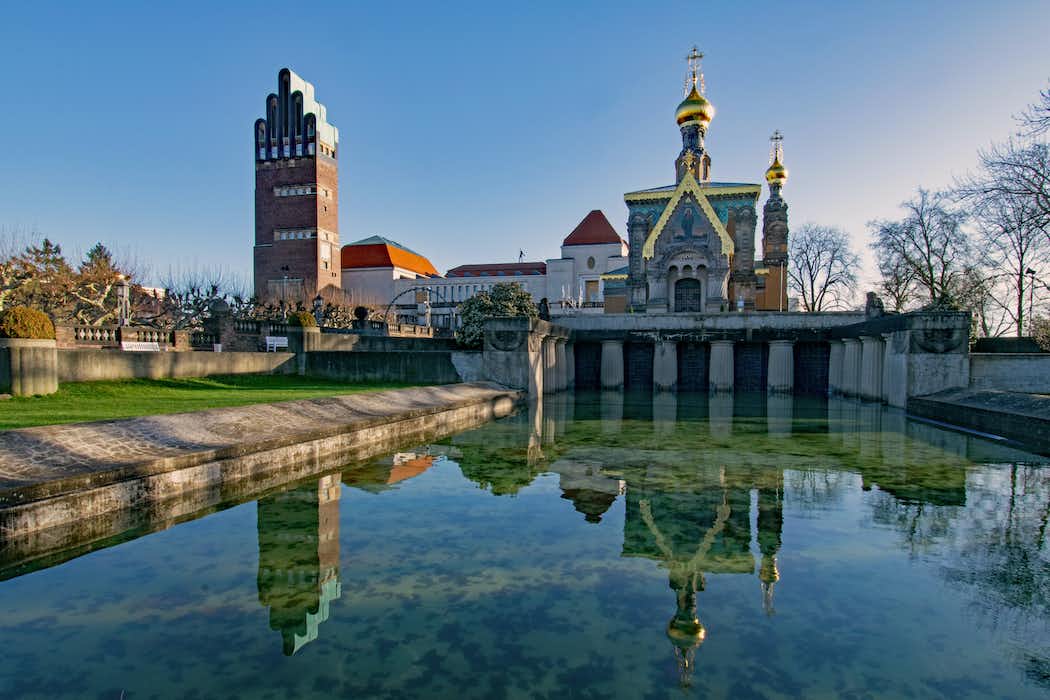 Established by the Grand Duke of Hesse in 1899, the Mathildenhohe artist’s commune could be considered the precursor to the Bauhaus school. 23 notable artists moved into the community and created an ensemble that showcased the artistic renewal of the Art Nouveau movement. From the artist’s homes to the Mathildenhöhe Darmstadt Institute, it’s like a Gesamtkunstwerk town. The standout sight on your 90-minute visit will likely be the striking Wedding Tower and multi-disciplinary museum of fine and applied art. 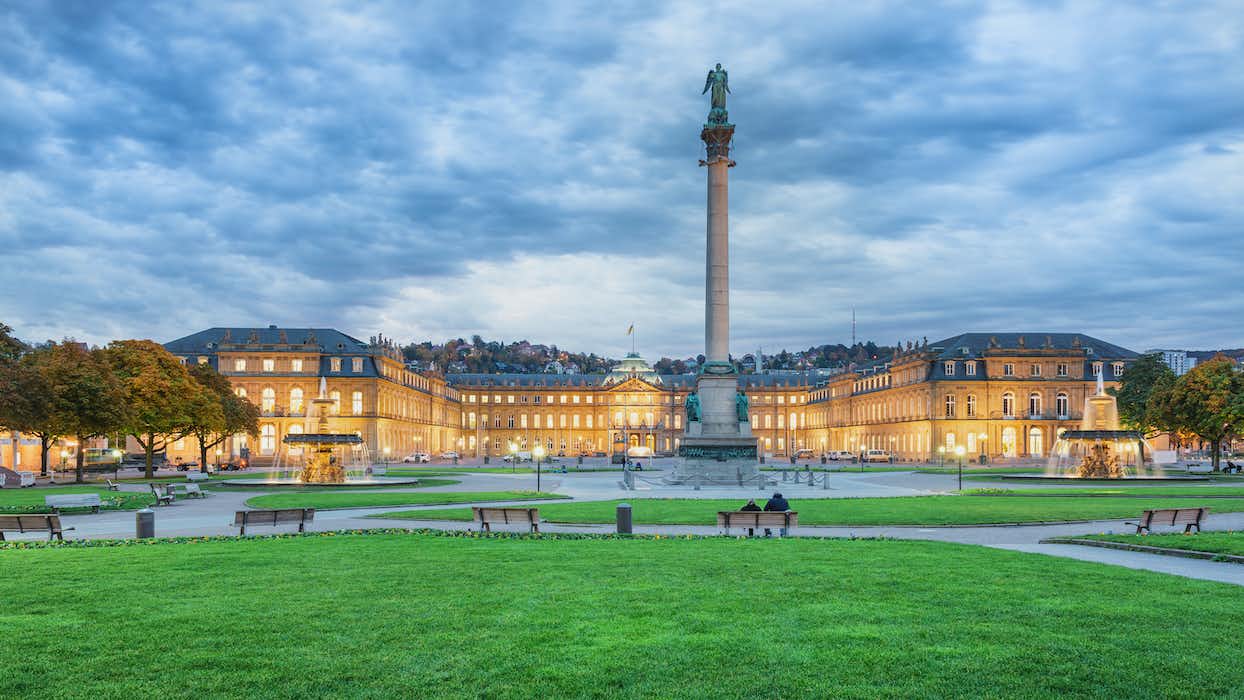 After Berlin, Stuttgart is one of the top destinations in Germany for design lovers. Both Mercedes-Benz and Porsche have exceptional museums here. The city library is modernism by the book, and the city center is brimming with beautiful historic buildings. But the city also has some criminally overlooked attractions for Modernism lovers.

Stuttgart was the hometown of Oskar Schlemmer, one of the leading members of the Bauhaus. You know the iconic Bauhaus face logo? That was him. Visit the Staatsgalerie Stuttgart to see a number of works by the multidisciplinary maestro (and their great temporary exhibitions). We’d go so far as to call him the Picasso of ballet.

When you’re done, head to the Stuttgart Weissenhof-Housing Estate. Spearheaded by Mies van der Rohe, seventeen leading European architects designed the colony’s twenty-one buildings. With Walter Gropius and a number of other Bauhaus members, the estate is one of the best-known Bauhaus building ensembles. The icing on the square, white cake are the two UNESCO-listed houses by Le Corbusier. While you can walk the streets anytime, be sure to get there early enough (before 17:00) to catch the museum and entry into the Corbusier furnished flat.

Book a car from Frankfurt to Stuttgart

Ready for your tour of Bauhaus and Modernism in Germany?

Here’s each leg of the trip.

If you’ve completed your tour of Bauhaus and Modernism in Germany but can’t get enough revolutionary architecture, check out or tour of Art Nouveau in Central Europe!