The Camino de Santiago, or “Way of St. James” in English, is one of the most important pilgrimages in Christianity. Since the Middle Ages, faithful from around Europe (and now the world) have followed well-worn routes to Santiago de Compostela in Spain, where St. James is said to be buried. There are multiple pilgrimage trails that lead to Santiago de Compostela, all of which are listed as UNESCO World Heritage Sites for their cultural significance and the important places they pass on the way.

The Camino Portugues, the “Portuguese Way”, is the second most popular route after the French Way. From Lisbon, the path crosses the country’s five main rivers, and showcases both the country’s rich history and beautiful natural landscapes. While pilgrims walk or bicycle (100 or 200 miles respectively) to get the Compostela certificate, you can also follow the Portuguese Camino by car to experience the same sights and history without the sore feet. 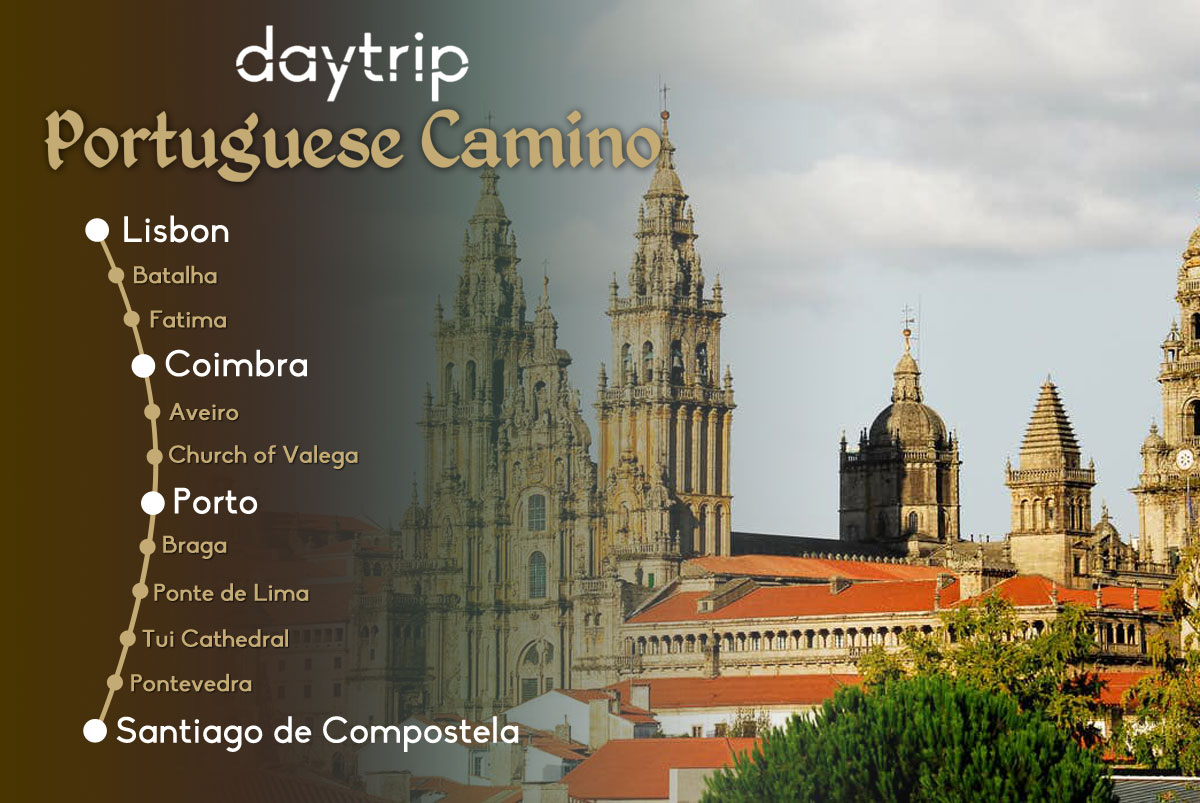 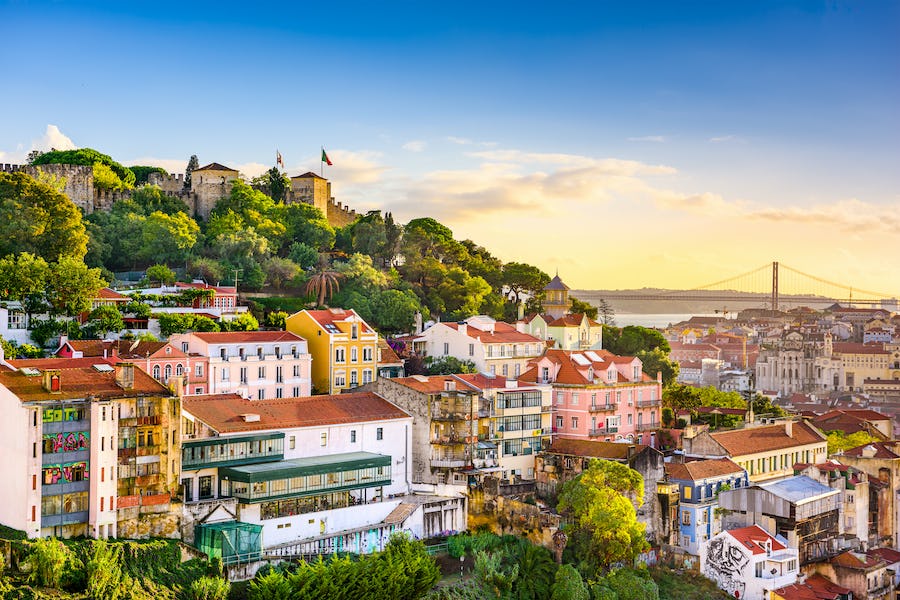 Spread across seven hills, Portugal’s seaside capital is a vibrant, sun-soaked delight. For a quick tour of the hilly Alfama district, hop aboard the bright yellow Tram 28, and watch as palaces and cobbled alleys slide by your window. Grab some fresh seafood or Pasteis de Nata (egg pastries) while exploring the city’s oldest quarter before heading up to St George’s Castle. This imposing citadel was first built by the Romans and modified by the city’s subsequent rulers.

From the Golden Gate-like 25 de Abril Bridge to the 12th century cathedral, there are plenty of monuments to discover. But if you only do one thing in Lisbon, make sure it’s a visit to the Torre de Belém. This 16th century tower in the sea is a UNESCO World Heritage Site fusing Romanesque, Gothic, Moorish and Mudejar styles in an amazing architectural display with a setting to match. If you can’t get enough intricate architecture, the (also UNESCO-listed) Jerónimos Monastery boast the same architectural legacy on an even larger scale.

When you’ve had your fill of the many things to do in Lisbon, begin the Camino de Compostela by heading from Lisbon to Coimbra. 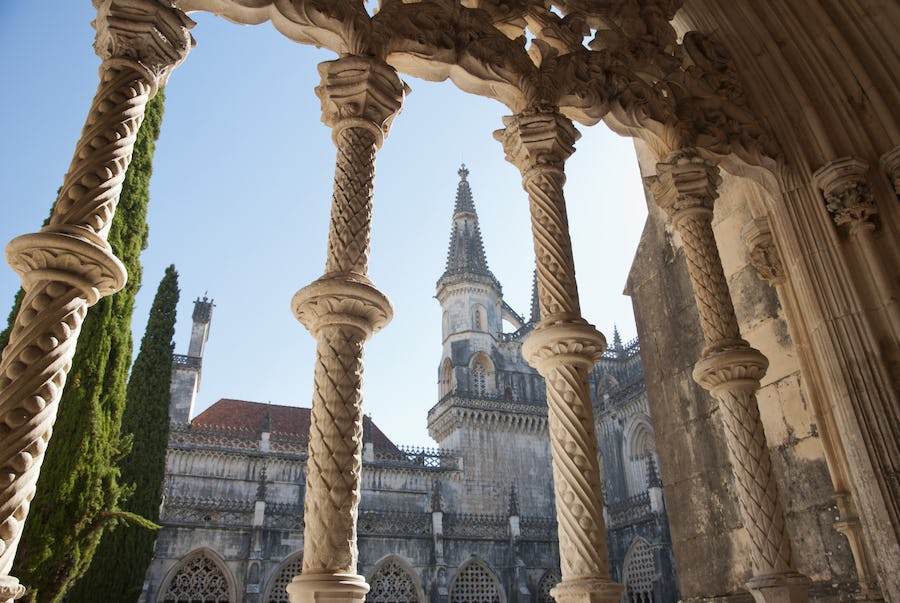 Batalha is one of Portugal’s most important towns. After his victory of the Castilians in 1385, King João I ordered the construction of the Batalha (“Battle”) Monastery. This UNESCO-listed monastery is now one of the country’s most spectacular pieces of Gothic architecture. Stop for 90 minutes to marvel at the intricate architecture and admire the tombs of Portugal’s 15th century royalty. 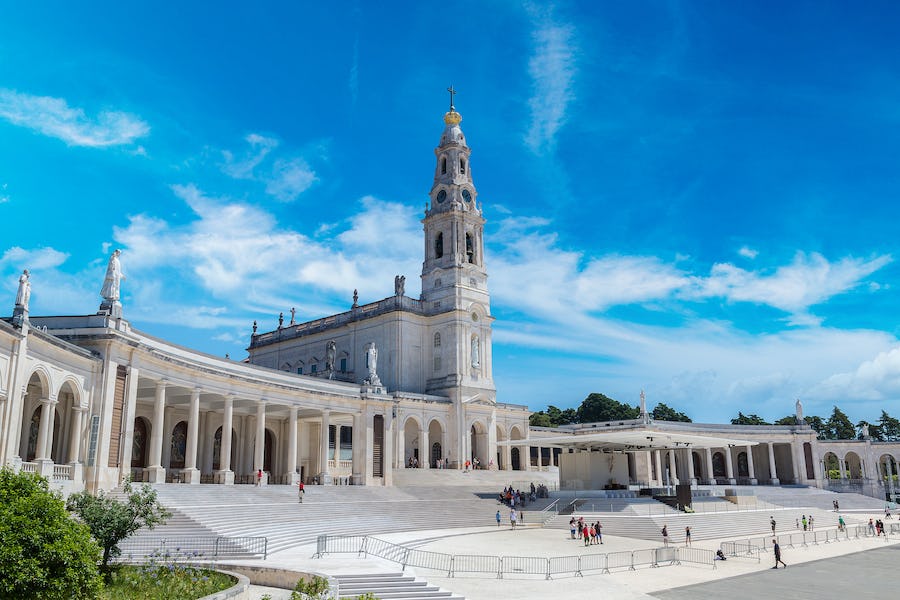 Once little more than a village and some pastures, Fatima became an international pilgrimage destination after three children saw visions of the Virgin Mary in 1917. The sprawling Basílica de Fátima was built on the site of the children’s homes. The Neo-Classical basilica and its 65-meter-tall tower overlooks a huge plaza where tens of thousands of pilgrims congregate every year. While not technically part of the Santiago de Compostela pilgrimage, if you’re a believer, it’s worth visiting one of the most important Marian shrines in the world for an hour. 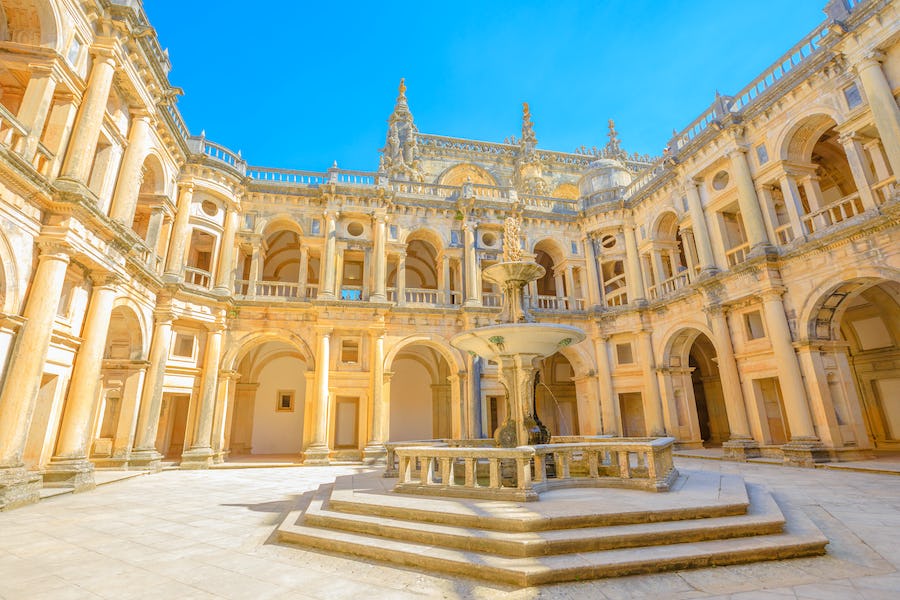 If you’re more interested in history, swap out Fatima for 75 minutes in Tomar (or add it). This charming city grew around a Templar castle, and the UNESCO-listed Convent of Christ still stands as a constant reminder to this heritage. Spanning 400 years of Templar rule, the convent was continuously modified and expanded and now exhibits Romanesque, Gothic, Manueline and Renaissance styles. And the town below is worth exploring as well, with easy to navigate streets laid out by Henry the Navigator. 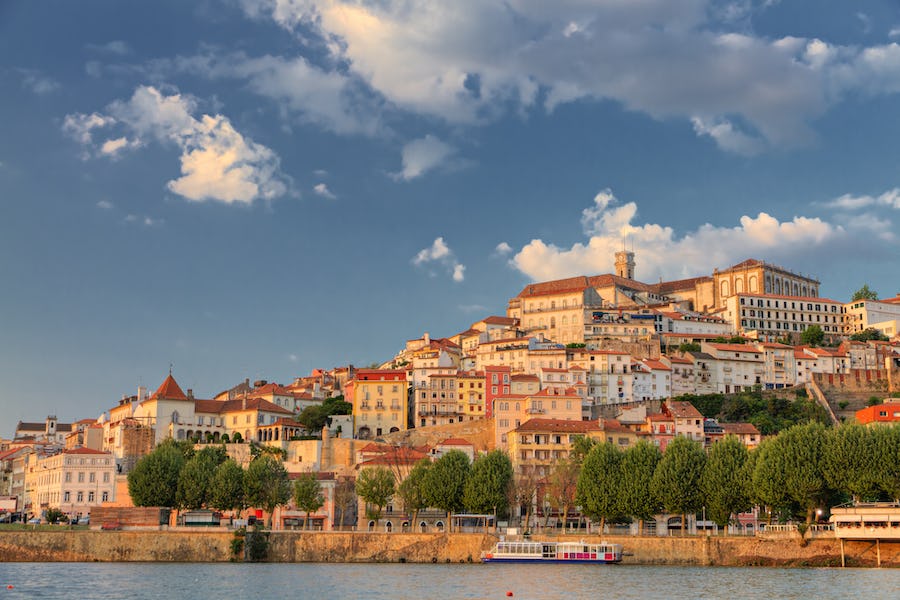 Little Coimbra is big on history. Its early Roman roots can be seen in the Cryptoporticus on display in the town’s Museu Machado de Castro. Through the middle ages it was an important Moorish trade center, and served as the country’s capital from the 11th to 13th centuries. Don’t miss the Universidade de Coimbra, reputedly the second oldest university in the world. This UNESCO World Heritage Site offers some amazing architecture from the 17th through 19th centuries. The highlight is the Baroque Joanine Library, which shelves its 300,000 works on jaw-dropping gilt-covered bookcases.

Tumbling down the hill from the university is the maze of cobbled streets and colorful buildings of Coimbra’s old town. Here, you can also find some of the city’s oldest monuments, like the 12th century Old Cathedral, one of the only Romanesque cathedrals in Portugal to survive to the present.

Book a car from Lisbon to Coimbra

Once you’ve schooled yourself on Coimbra’s culture, continue on the next leg of the Camino de Santiago and travel from Coimbra to Porto. 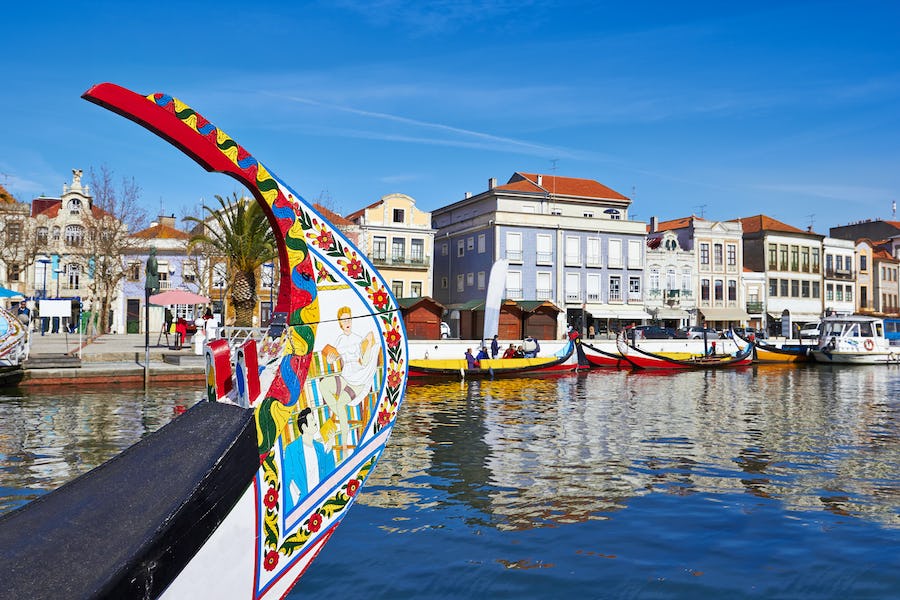 The fishing village of Aveiro is often called “the Venice of Portugal” for its network of canals and gondola-like boats. Take 90 minutes to wander the canals lined with colorful tiled cottages and you’ll see that’s where the similarities end. Instead, this village offers workaday charm, though the Convento de Jesus with its Renaissance cloisters and 17th century gilded carvings does have a certain grandiosity. 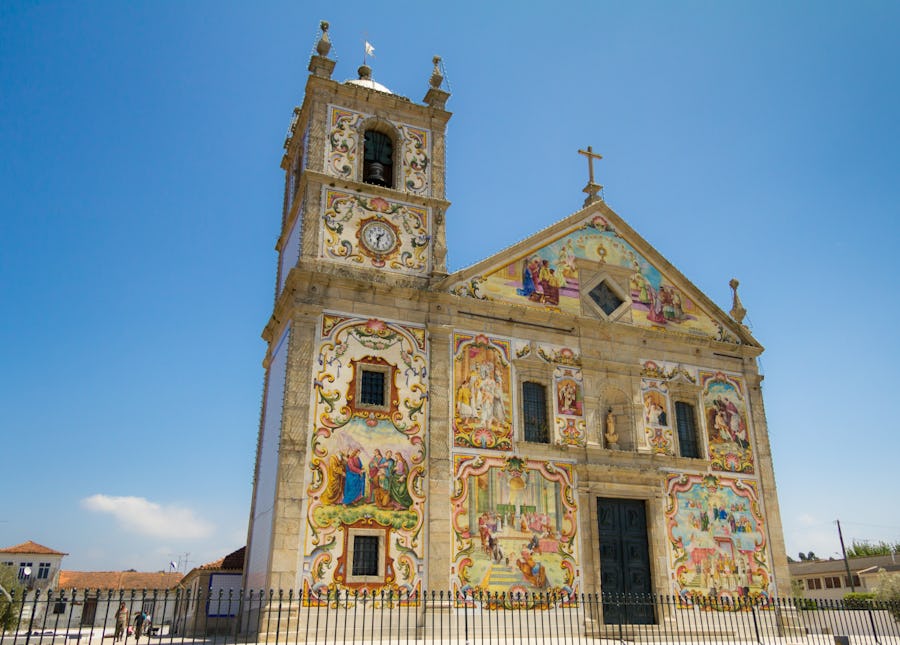 Stop for 45 minutes to admire one of Portugal’s most beautiful churches. The larger-than-life tiled panels depict the different stages of the life of Virgin Mary. And inside, along with more painted tiles, the ceilings are made from exotic woods, with marble adorning the indoor walls, coir and general wainscots. 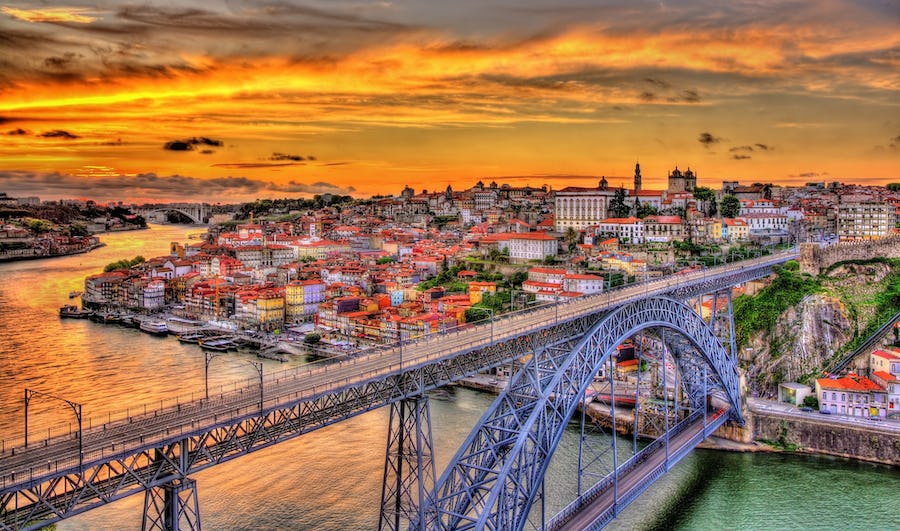 Ancient Porto is a city steeped in tradition. It’s eponymous sweet wine received the nickname “port” in the 17th century, and the Douro wine-growing region is the 3rd oldest appellation in Europe. The city itself, built along the hills overlooking the Douro river, provides breathtaking vistas over the colourful buildings and narrow cobbled streets. The UNESCO-listed historic center is a treat to explore, where even bookshops like Livraria Lello are jaw-droppingly beautiful.

While deciding where to start is tough, you can’t go wrong with the riverfront Cais da Ribeira. Colorful buildings housing shops, restaurants, and cafes line this lively riverside street. It’s the perfect place to partake in Porto’s amazing cuisine. Plus you get a great view of the iconic Luís I Bridge.

After, head up to the castle-like Porto Cathedral. Though it’s had a few renovations, its maintained much of the original 12th-century architecture, including buttresses, arrow loops and crenellations that would have been used for defense.

The Church of São Francisco is arguably even more impressive. Completed in 1425, it was the city’s last Gothic monument, so the ornamental portal, lovely rose window, and long lancet windows are pinnacles of the style. The interior decorations, mostly from the 16th to 18th centuries have some of the most lavish gilded woodwork you’ll ever see.

Book a car from Coimbra to Porto

Once you’ve drunk in Porto’s rich culture, finish up the Camino de Santiago and head from Porto to Santiago de Compostela. 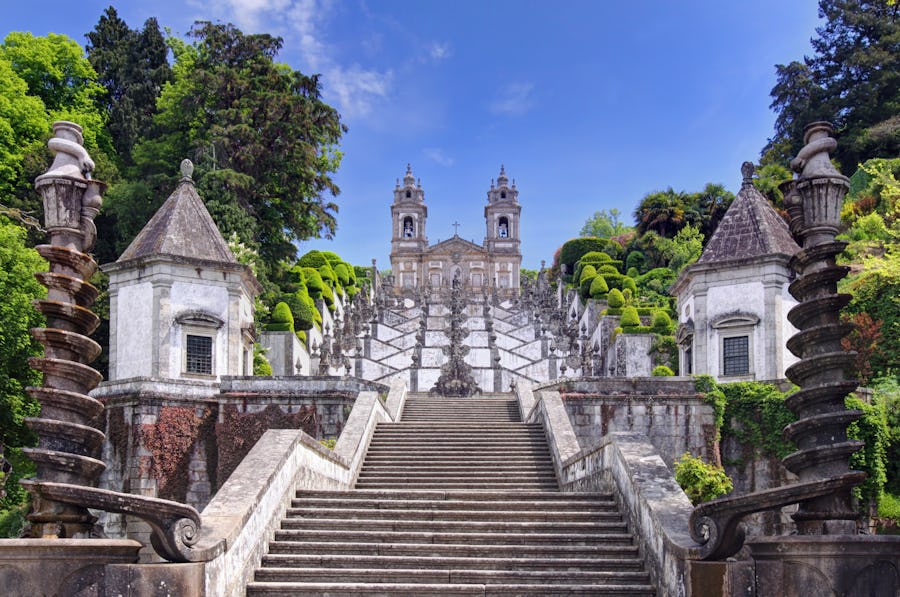 Since the 12th century, Braga has been the religious capital of Portugal, and now boasts more than thirty churches. In the 16th century, the wealthy archbishops began an architectural overhaul, transforming the city into a baroque wonderland. Nicknamed “the Rome of Portugal”, during your 150-minute visit you can still find a relic of the actual Romans here: the Fountain of the Idol. But what attracts most pilgrims to Braga is the hilltop Bom Jesus do Monte. To reach the 19th century basilica work your way up “The Sacred Way” — a winding staircase lined with grottoes, fountains and gardens. 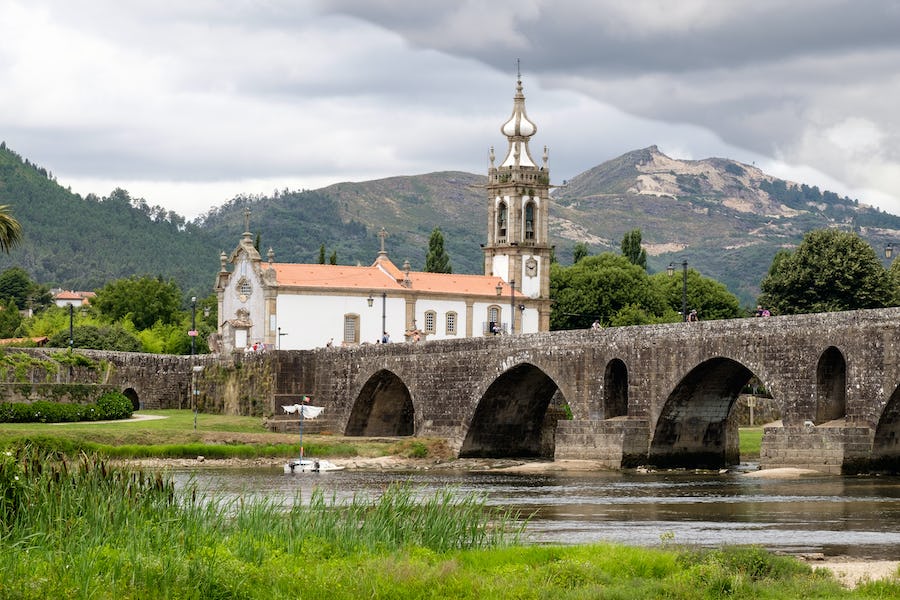 Ponte de Lima, Portugal’s oldest village is also one of its most charming. When the Romans first laid eyes on the Limia River, they thought it so beautiful that it could only be the legendary River Lethe. The bridge the built is flanked on either side by beautiful churches. On one, the charming little Igreja de Santo António da Torre Velha. In the town proper, the Romanesque Igreja Matriz de Ponte de Lima. 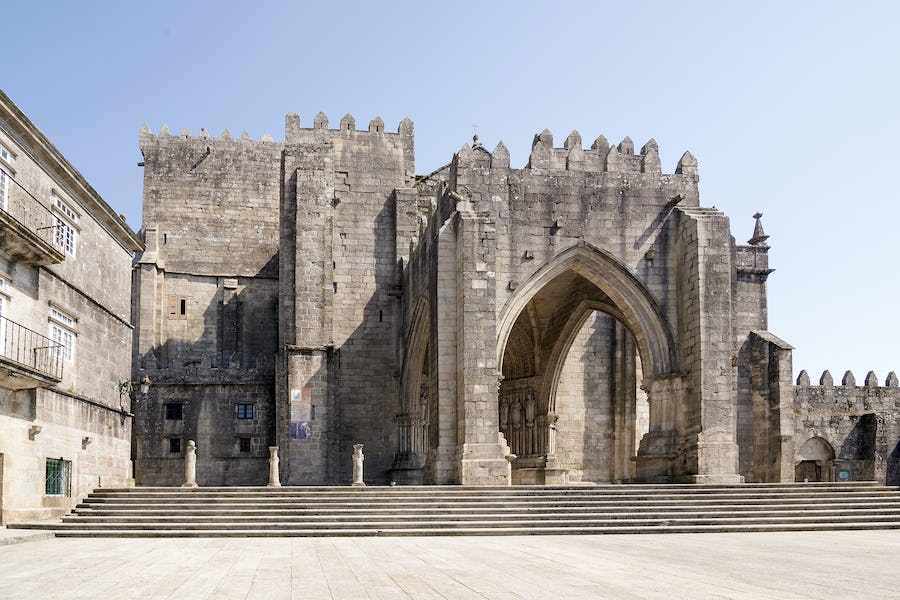 Consecrated in 1225, the imposing Tui Cathedral looks much like a castle, because it partly is. Take an hour to admire the earliest Gothic art in Spain. The grand main portico is a masterful work of masonry, and the cloisters are an impressive pathway of vaulted ceilings, columns, and altars of stone and timber. After exploring the numerous chapels, head up to the battlements to for a great view of the countryside from atop “God’s Castle”. 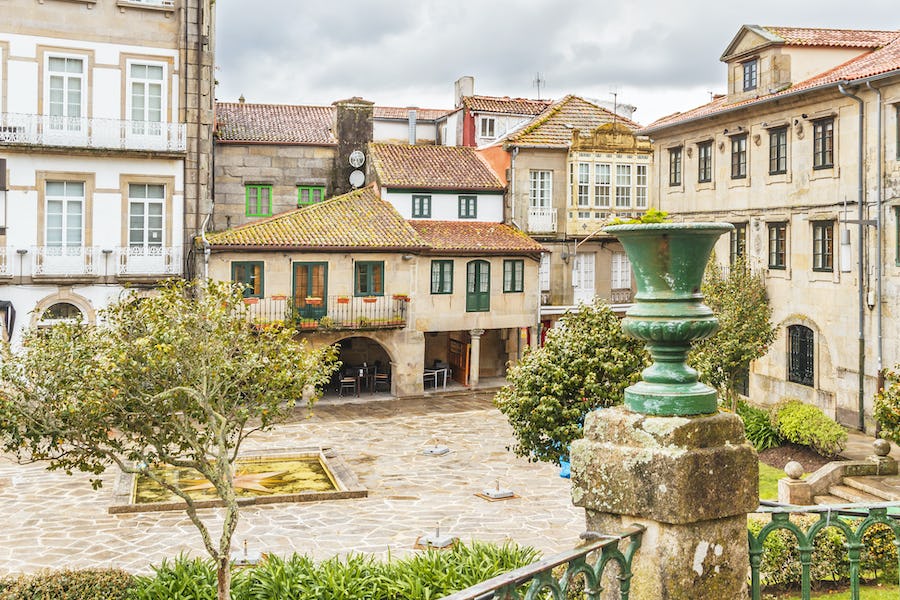 The final stop before Santiago de Compostela, Pontevedra was the capital of Galicia in the 16th century, and an important port. Many locals believe Columbus was actually a Pontevedran nobleman who faked his own death and took on a new identity. Spend 90 minutes exploring the streets lined with classic ‘cruceiro’ – elegant houses with granite arches. The main draw for pilgrims is the 18th century Peregrina Chapel. This intricately decorated Baroque structure has a unique scallop shell floor plan – the traditional symbol of pilgrims on the Camino de Santiago. 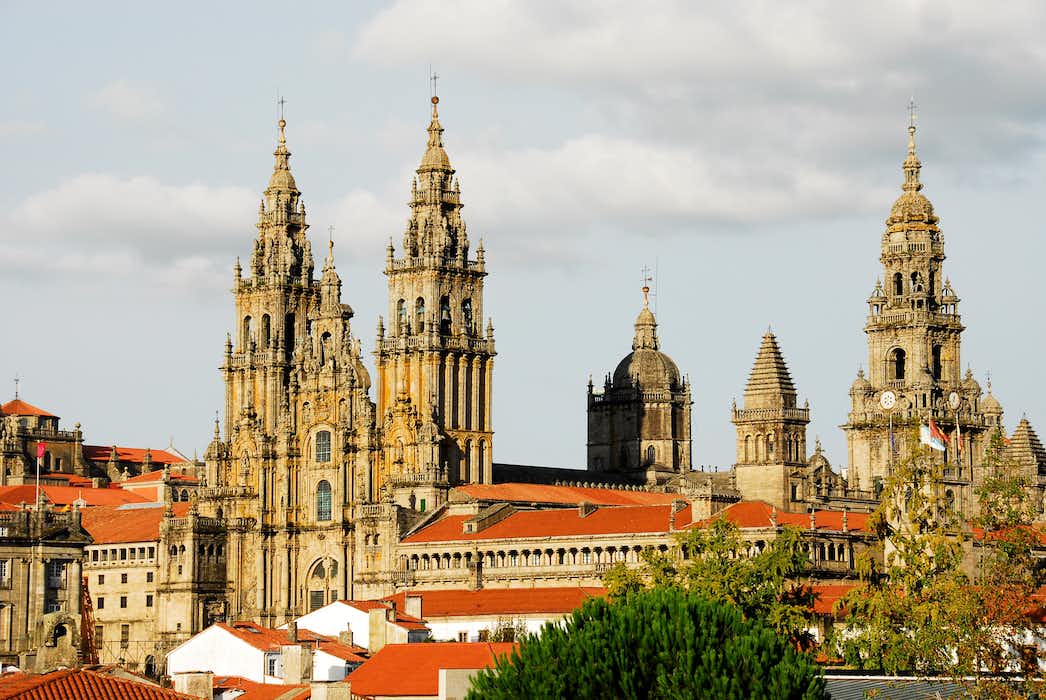 You made it to the end of the Way of St. James! Santiago de Compostela is one of the most important pilgrimage destinations and one of the most beautiful cities in Spain. Romanesque, Gothic and Baroque buildings fill the entire UNESCO-listed old town.

Make your first stop the city’s main square, the Plaza do Obradoiro, one of the most beautiful urban spaces in the world. On one side, the famous Hostal de los Reyes Católicos has been housing pilgrims since it was founded in 1499 by the Catholic Monarchs. Then there’s the neoclassical Rajoy Palace, now the city’s town hall, adorned with a statue of St. James riding his horse in battle. Oh, and the San Martin Pinario Monastery, the second-largest in Spain. This magnificent Baroque building boasts 3 cloisters, a fountain and 15 statues between the columns on the facade.

But the crown jewel is the 11th century Cathedral of Santiago de Compostela. As the resting place of one of Jesus’ apostles, artistic attention has been heaped on the cathedral for centuries. Every nook and cranny is intricately carved. But the amazing 12th-century Portico da Gloria steals the show. It’s undeniably one of the world’s finest pieces of Romanesque sculpture.

Of course, the crypt is what’s been drawing pilgrims for over a millennium. It’s here that you can see the tomb of St. James and two of his disciples, as well as several Spanish kings. Even if you’re not interested in the religious importance, they’re a historic and artistic treat. While you’re down there, check out the “botafumeiro”, a giant incense burner that is in action on religious holidays.

Book a car from Porto to Santiago de Compostela

Ready to book your trip on the Camino de Santiago Portuguese Way?

Here’s each leg of your journey through Portugal to Santiago de Compostela.

If you can’t get enough Iberian medieval history, travel one of the other Camino de Santiago routes in reverse! For maximum historic significance, we’d recommend The French Camino. If you love food and unique culture, you definitely want to experience The Northern Camino!