Welcome to Greece! The cradle of civilization, where modern society came to be. Greece is located on the southernmost point of the Balkan peninsula, where Europe meets Asia! There’s mythological and legendary relics from Greek antiquity, and influences from the Ottoman Empire.

Greek Mythology is one of the most impressive works by an ancient society. It shows the great ingenuity and the structure of power and faith that Greeks served and looked up to during their time. The stories range from heroic acts to strange creatures and gods. It shows the questions that they would ask, and how the formulation of these answers turned into oral and poetic tradition. Even today, Greek Mythology has a huge influence on Western Civilization. It is thanks to Greek influence that we enjoy the art and poetry today.

With Daytrip, discover all that Greece has to offer by visiting the most iconic points. You can learn about the majesty of Ancient Greece and its mythological magic. If you want to break, there is loads of culture to discover in each place in Greece. From Athens to Thessaloniki, you will never find a shortage of culture. 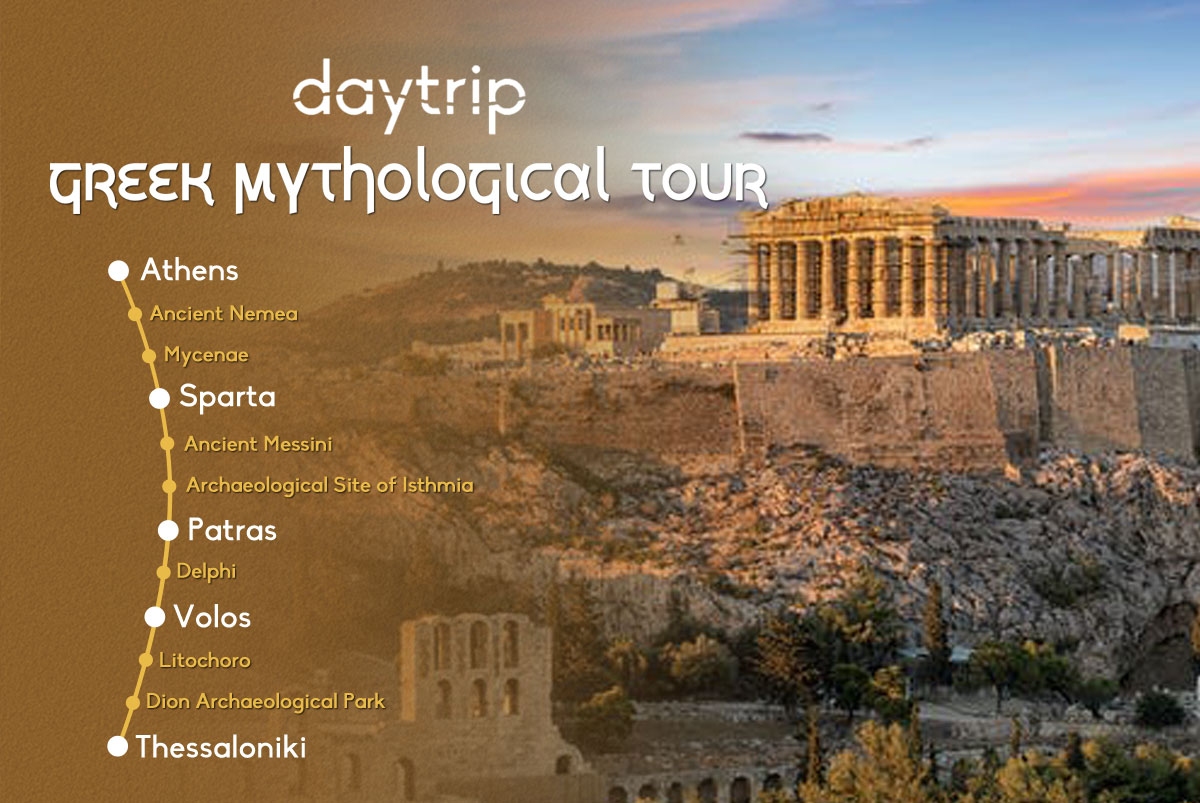 Athens, Greece’s bustling capital. One of the world’s oldest cities, it has 3,500 years of culture, history and growth in its repertoire. Since time immemorial, Athens (and nearby Piraeus) was a powerful city-state rich with prosperity, arts, philosophy and legislation. Athens is the birthplace of democracy. Further to its ancient grandeur, it is home to organized sports! Athens was the host city of the first modern-day Olympics and is actually one of the rare instances where they hosted the modern-day Olympics twice!

Visit the Acropolis, the reason why people travel far and wide to this beautiful city. Step into a time warp and learn about the legends that are told about the hill this great monument was perched on. It is said that Athena dropped a rock from her hands during the contest between her and Poseidon over the naming of Athens, thus creating Lycabettus Hill. Visit the famous Areopagus Hill where the Criminal Court was incepted after the legend of the God of War, Ares, was put on trial for his war crimes! The Temple of Hephaestus is a worthy sight with tales of lust and passion. 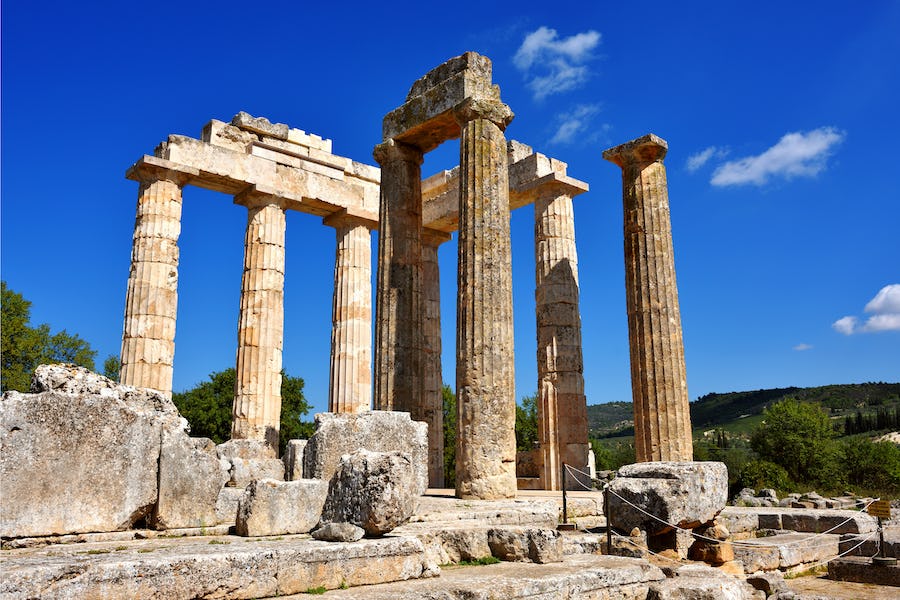 Explore Nemea, an ancient ruin in what was once part of ancient Argolis, for two hours. In mythological context, this is the site where Heracles battles the Nemean Lion, owned by Lady Hera. The Stadion, the most notable site, is also where the Nemean games took place, paying homage to the Heracles myth. 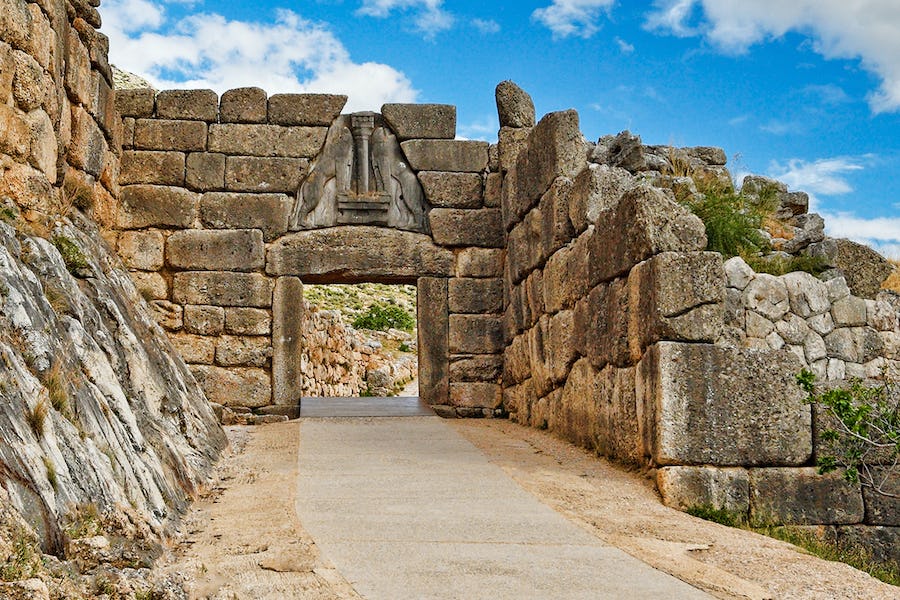 Take 90 minutes to wander Mycenae, one of the oldest cities in the region, which dates back to the Neolithic era. Perseus, son of Zeus, is said to have founded the city. This will-preserved ruin is perhaps best known as the home of Agamemnon, the leader of the expedition during the Trojan War. 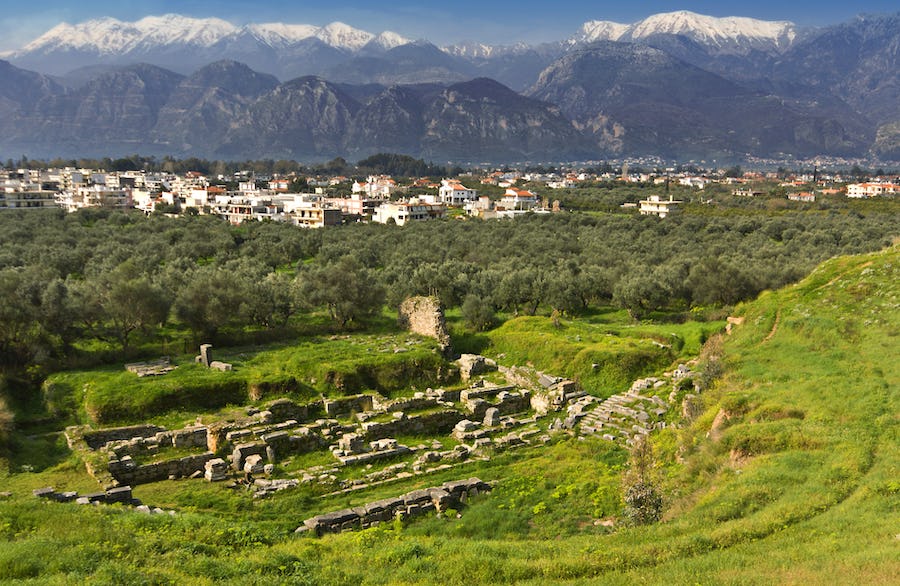 What seems like a humble town today was once the city of grandeur and military might. With almost every facet of its society revolving around military power, its easy to see why Sparta was one of the first places to dare face the mighty Persian Empire. While you’d assume it was a masculinity-centred place, women and minorities enjoyed the more equality here than anywhere else in the world at the time.

The archaeological site of Menelaion was where Opheltes’ infant was killed by a snake. Honoring this tradition the Spartans used it as a ceremonial site where virgins gave their lives to save their city or loved ones. This is also the area where the Heroic cults, groups organized to resolve a crisis or an unjust death, began. Visit the Tomb of Leonidas, the only monument preserved from the Agoran era. The nearby Sanctuary of Artemis was were Spartans performed ritual dances for the goddess Artemis. This is also where the tradition of masks was incepted in Spartan tradition.

Book a car from Athens to Sparta

After learning about the military grandeur of Sparta, march on to the “Gate to the West” — Patras! 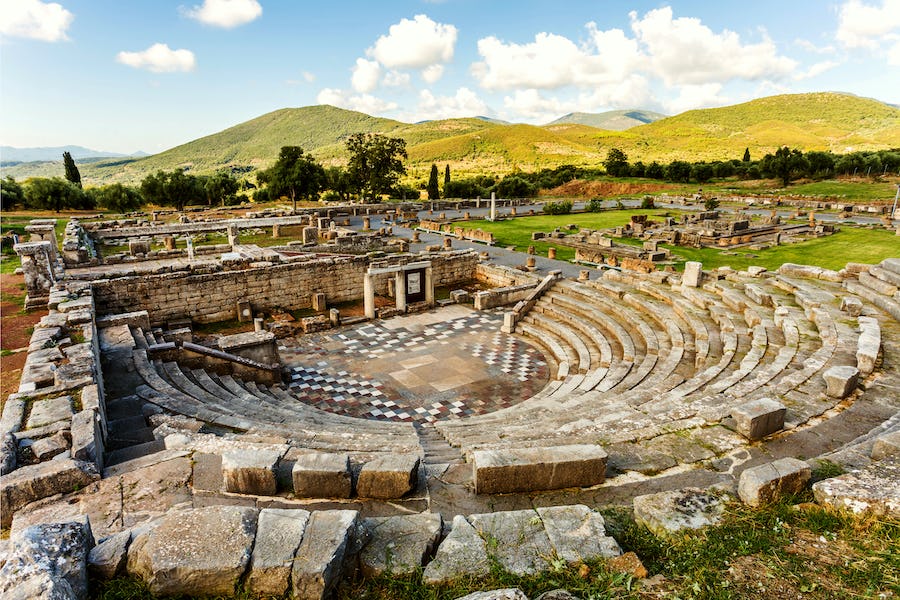 Founded in 371, Messini used to keep watch over the aggressive Spartan Empire. Spend 90 minutes discovering the birthplace of Zeus (at least that’s what the locals say). With many relics, like the Agora and the bathhouse, you will not find a shortage of myth and mystery in this site!

The first temple dedicated to Poseidon, this was the site of the Isthmian games which were held the year before and the year after the Olympic games. Other than the temple, on your one-hour visit you’ll find an ancient theatre as well as the stadium, which you can distinguish the balbis! 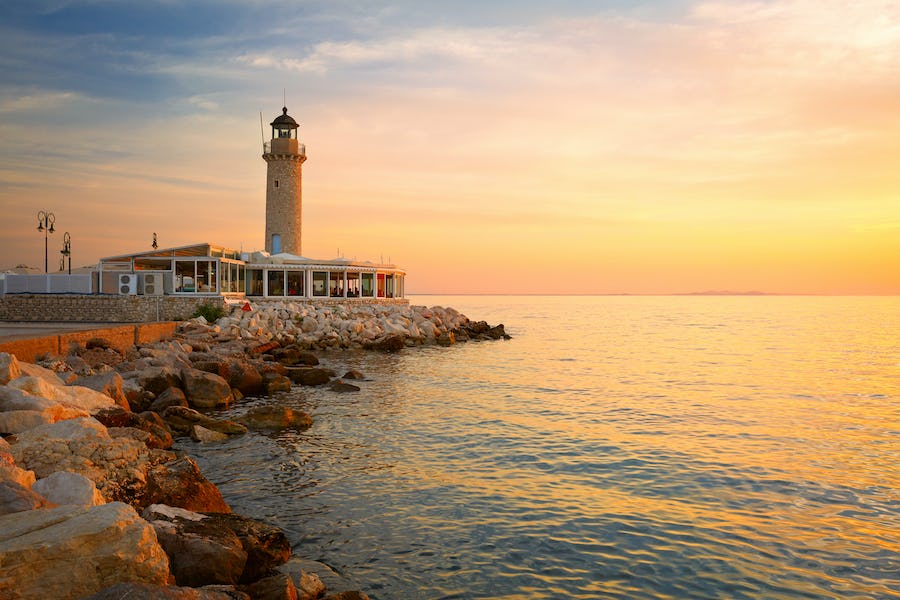 Mythology states that Patras was founded by Patreus, leader of the Greek tribes from Laconia and distant relative of the founder of Sparta. Eumelus was taught by the gods how to grow food in the rich soil in the region, which established the city’s prosperity. Today, Patras is a successful city and a gateway port from the rest of Europe to the east.

Visit the Archaeological Museum of Patras to learn about Patras in antiquity. To learn about the interesting Roman past, go to the Roman Odeon Amphitheatre, which has been fully restored to its former glory. The Voundeni Mycenaean Cemetery was in use from 15,000 to 1,000 BC. For a delicious conclusion to your time in Patras, visit the Achaia Clauss Winery — the second oldest operating business in Greece, after the National Bank. Taste some wine, and enjoy your time!

Book a car from Sparta to Patras

Leave the Peloponnese after getting your fill of the Mycenaean and Spartan history and head from Patras to Volos. 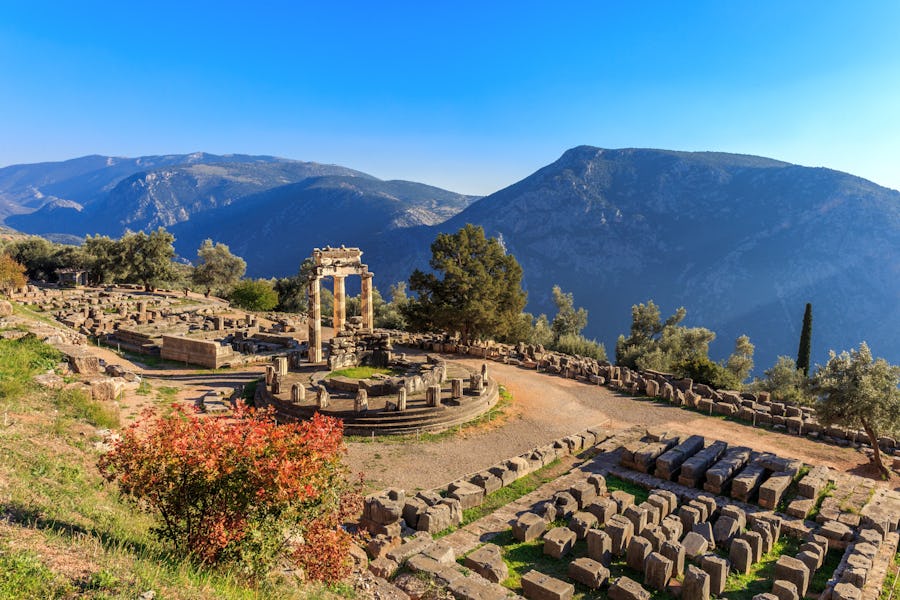 Visit what Greeks considered as the centre of the world for two hours. Delphi’s ruins carried religious significance even to the Romans, with even the great Pliny the Elder paying them a visit. See the Altars, the Stoa and the Theatre to travel in time. And get excellent photos of one of the most beautiful views in Greece! 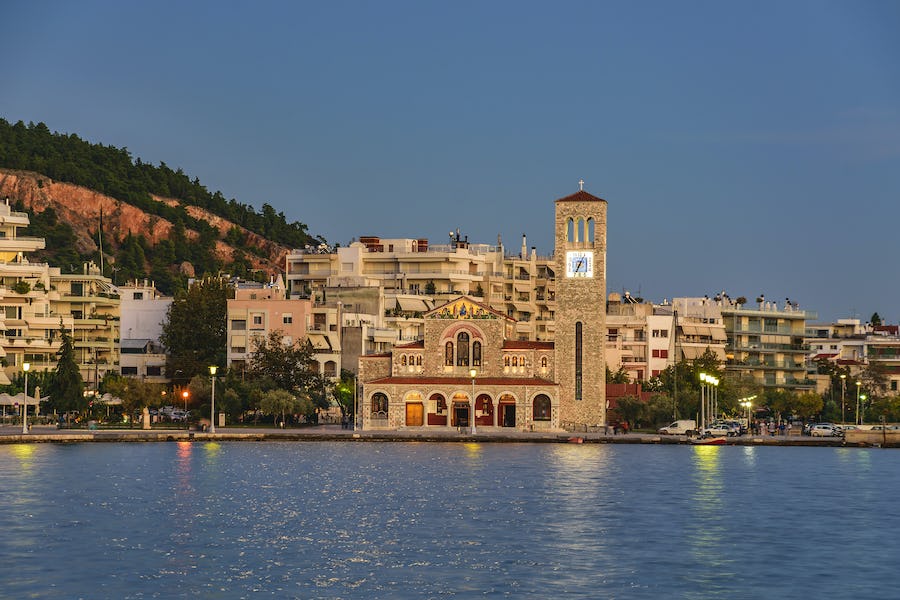 One of the most beautiful cities in Greece, Volos is a beautiful example of a historically wealthy city. You can see this in the city’s architecture. Grand facades on the old buildings, and modern and beautifully built structures, mansions and municipal buildings. Being by the sea, you can walk by the tsipouradika, the corniche of the city. Little restaurants dot the seaside as you walk down the quaint promenade.

Volos’ mythical background is something out of the storybooks. Included in an epic, this is where the centaur (half man, half horse) was born. Legend also states that Achilles was actually the pupil of the Centaur Chiron. Visit the Centaur’s path, which the locals utilise to access their olive groves. Take this small hike to see one of the most beautiful views of Volos and its surroundings, and learn about the legend of the centaurs. The Athanasakio Archaeological Museum houses many relics from the Neolithic settlements of Simini and Sesklo, as well as relics from the Trojan War!

Book a car from Patras to Volos

After sitting by the sea, continue on from Volos to Thessaloniki, Greece’s first major city! 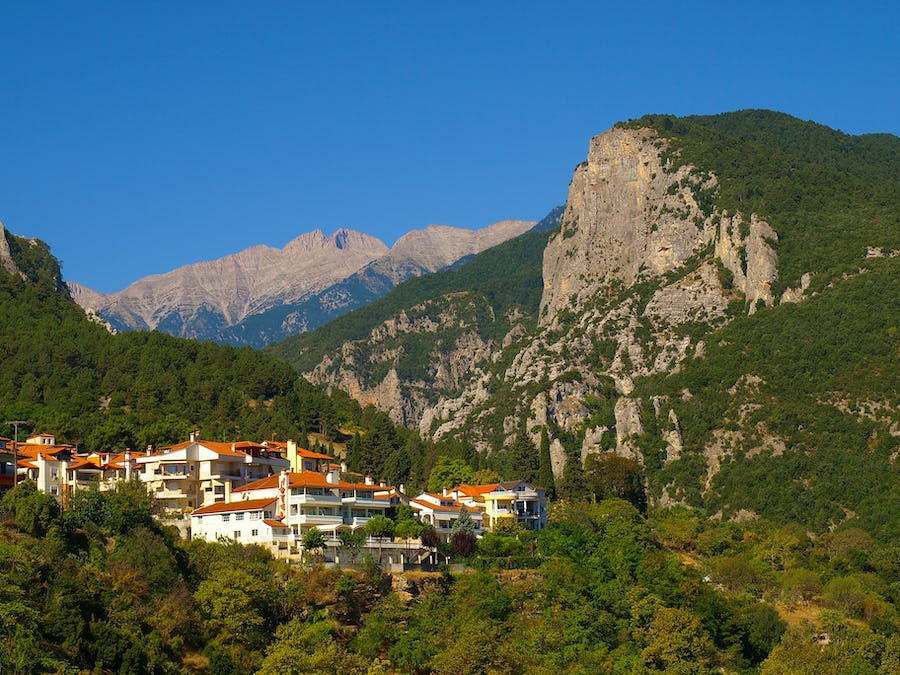 Litochoro is a picturesque town near Mount Olympus, the most iconic mountain in Greece. Take in the unique Macedonian architecture and learn about the Olympian gods that define the historical significance of the area on your 90-minute visit. 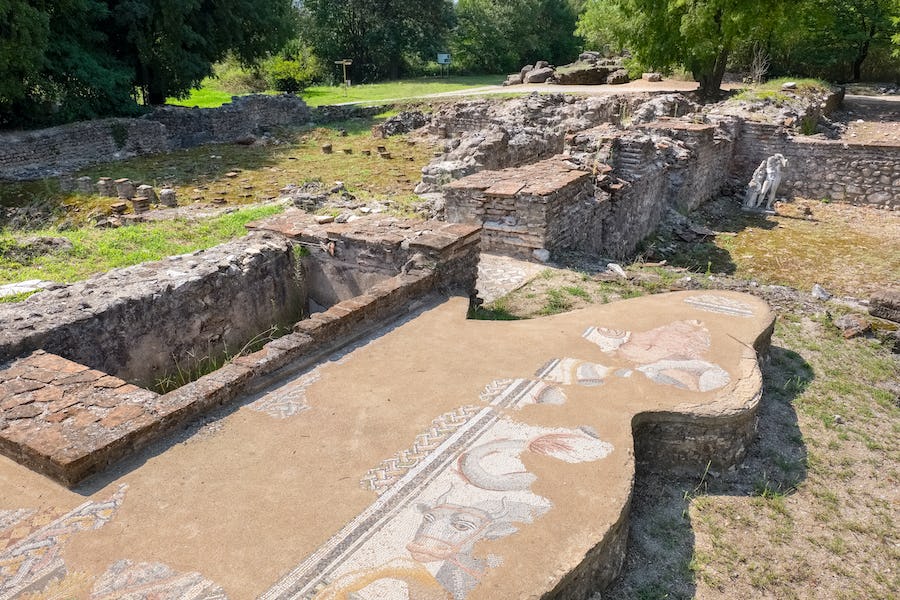 This adventurous site is home to temples, altars, and sanctuaries. Rinse your hands in the Vaphyras, where the women who killed Orpheus wanted to wash the blood off of their hands, but the river dried up! Visit the many temples and sanctuaries dedicated to the Olympian gods and symbolize the fertile and arduous nature of the Olympian homeland on your two-hour visit! 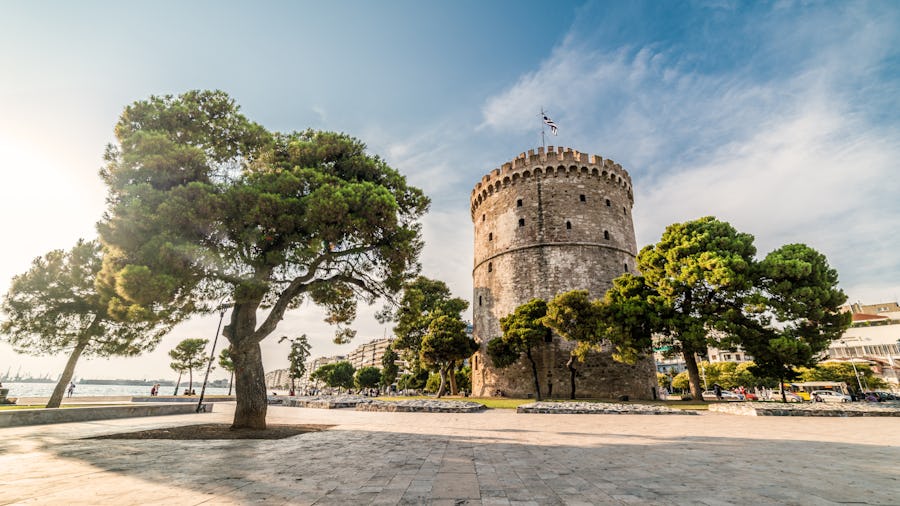 Greece’s second-largest city, Thessaloniki is often called the “Co-Capital” for its size, and historic importance. It was the second largest and wealthiest city of the Byzantine Empire, and “co-reigned” alongside Constantinople. Because Thessaloniki was under Ottoman rule for a century longer than the rest of Greece, the city has kept a lot of its Eastern cuisine and culture. Most tavernas serve traditional Turkish food with a Greek twist, as well as traditional Greek fare, like Bougatsa. Thessaloniki is also home to the Frappe Coffee, an iconic drink in the country, invented by accident by the Greek ambassador to Nescafe in the 1950s.

Named after Alexander the Great’s half-sister, Thessalonike, the city has a wealth of historic monuments. You’ll find late-Roman monuments like the UNESCO-listed Rotunda of Galerius, Byzantine churches, and medieval defensive walls. The Thessaloniki Museum of Archaeology is one of the largest museums in Northern Greece. The exhibits mostly hold relics of the Greek Classical Era, and reveal treasures as well as everyday objects of the time. For other adventures, visit the Bey Hamam and the Ataturk Museum, both of which are from the Ottoman Empire. The Ataturk Museum is the birthplace of Mustafa Kemal Ataturk, the beloved historical figure of Turkey. Visit the Museum of Byzantine Culture for a taste of Thessaloniki’s ritzy and religious past.

Book a car from Volos to Thessaloniki

After getting to know the best of Greek and Turkish culture in the idyllic city of Thessaloniki, why stop there? Make a lasting impression of Greece by adding a trip from Thessaloniki to Parga, a quaint seaside town. 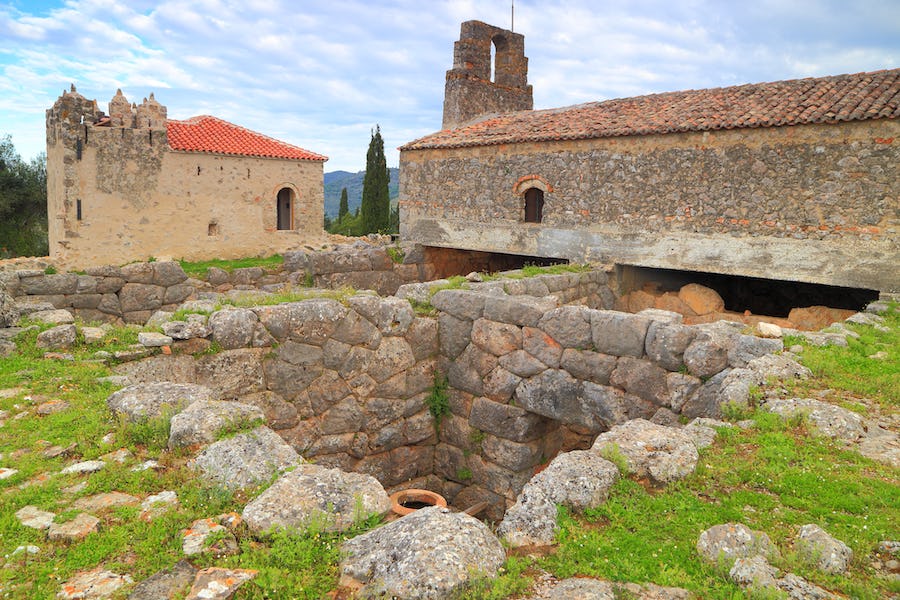 Stop for 90 minutes at the entrance to the Greek underworld! The ancient Greeks believed that this Necromanteion was the door to the God of Death — Hades. Explore the many tunnels, rooms and archways that will spook you out as well as spark curiosity with the Greek obsession with death and the afterlife. 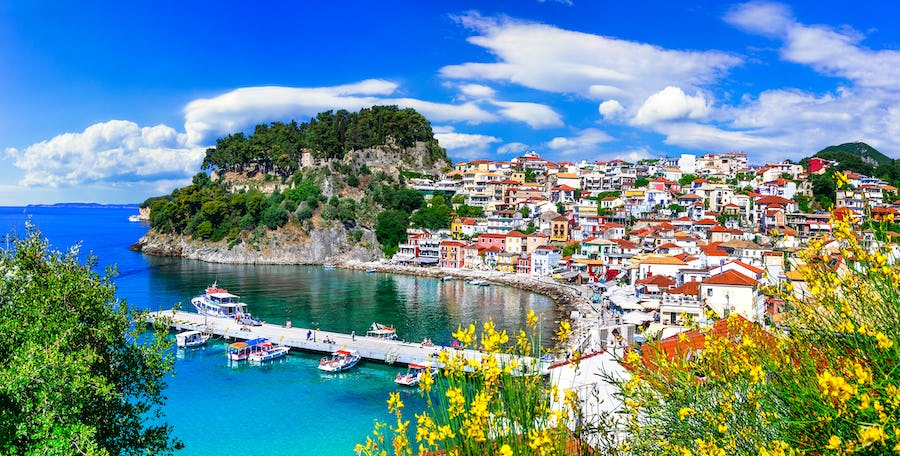 Little Parga is the perfect place to unwind and conclude an adventurous vacation! Unwind by the Ionian Sea without worrying about getting from point A to point B. The 14th century Greek fortress is a great place to start for great views of the coast. Also be sure to visit the old Ottoman Ali Pasha Castle before heading to Valtos beach. You can learn about the Ottoman influence over the region as you take in the magnificent views.

For your dose of Greek Mythology, make the short trip to the Acheron river. According to legend, Zeus condemned the river to remain under the earth, making it one of the five rivers in the Greek mythical underworld. Take a dip in its crystal-clear waters and find out about the river’s ancient energy!

Book a car from Thessaloniki to Parga

If the gods have moved you to seek adventure, the first step is easy! Here are the links to each leg of your 4-day (plus a bonus) tour through Greece!