Regardless of your race, creed, or religion, Israel is historically and culturally fascinating. There are ancient Jewish cities and some of the most revered sites in all three Abrahamic religions. Medieval Crusader monuments and Ottoman fortifications. Luxe seaside resorts and some of the best Bauhaus architecture in the world. You can even swim through ancient Roman ruins!

We’ve assembled an easy 4-day tour through Israel that will let you experience these sights and more (did we mention ancient Egyptians yet?). 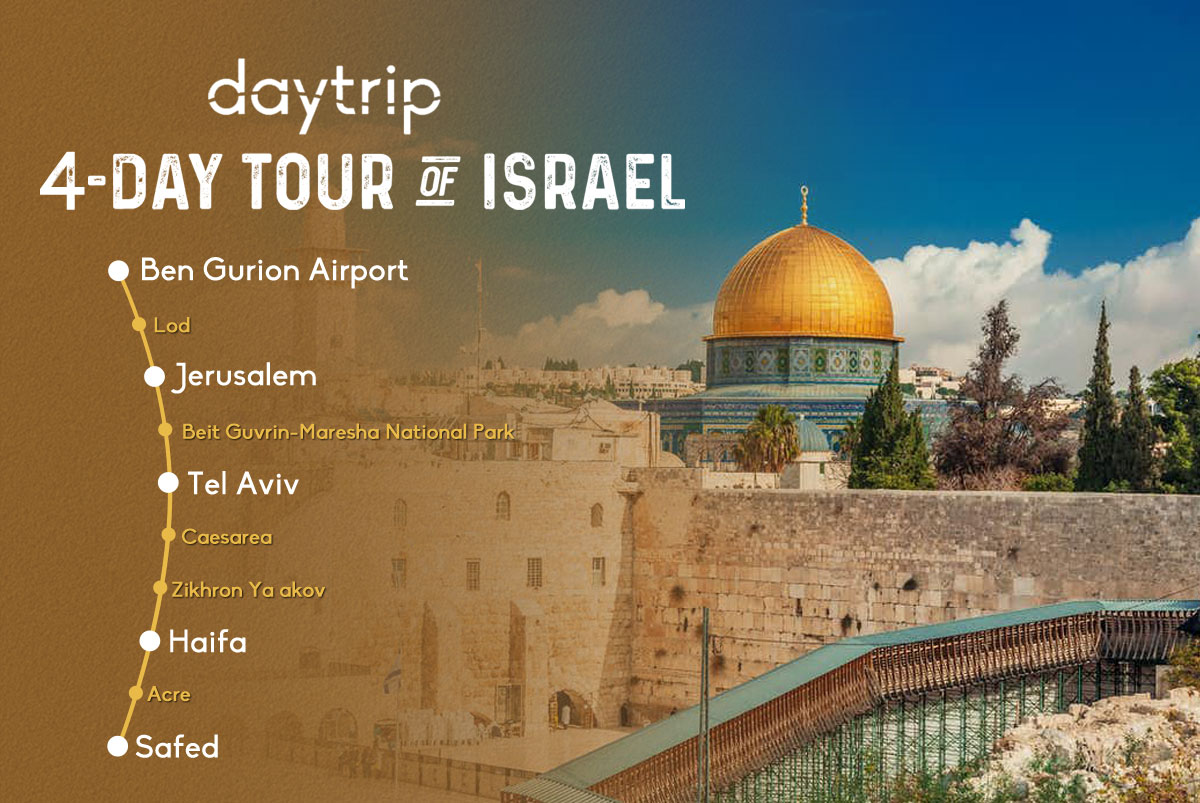 After touching down in Israel, travel from Ben Gurion Airport to Jerusalem. Immerse yourself in the amazing culture and history of one of the world’s holiest cities. 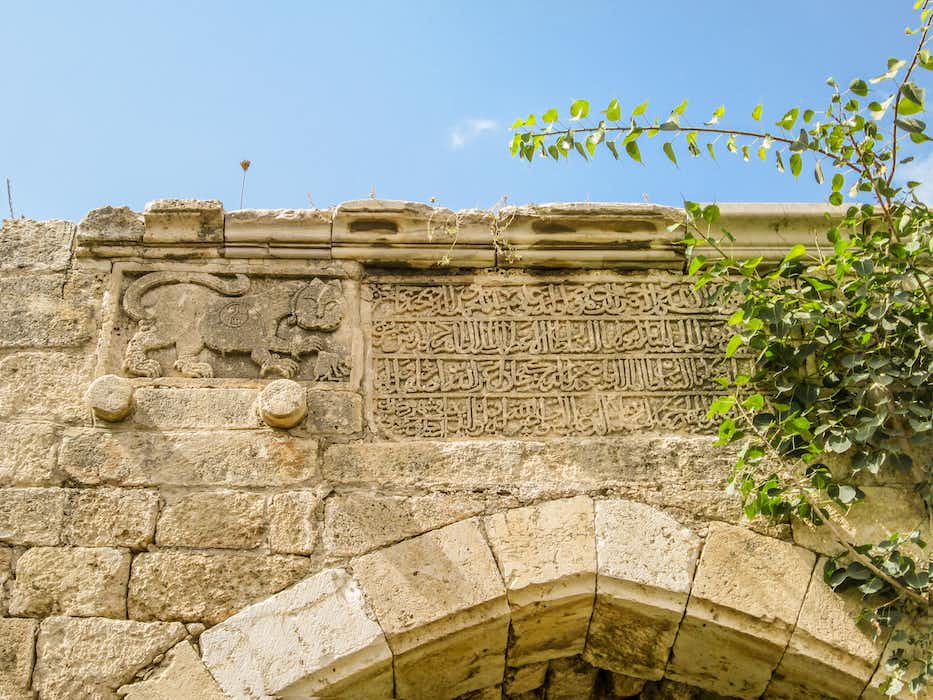 On the way from Ben Gurion to Jerusalem, stop and explore the ancient birthplace of St. George for an hour. When Lod came under Muslim rule, they transformed cathedral built by the Crusaders in the dragon slayer’s honor into a mosque. Yet it’s still one of the best-preserved churches from the era and a symbol of the mixed community that still inhabits the city. Even better than the cathedral are Lod’s intricate Byzantine mosaics, which are among the largest and finest in the country. 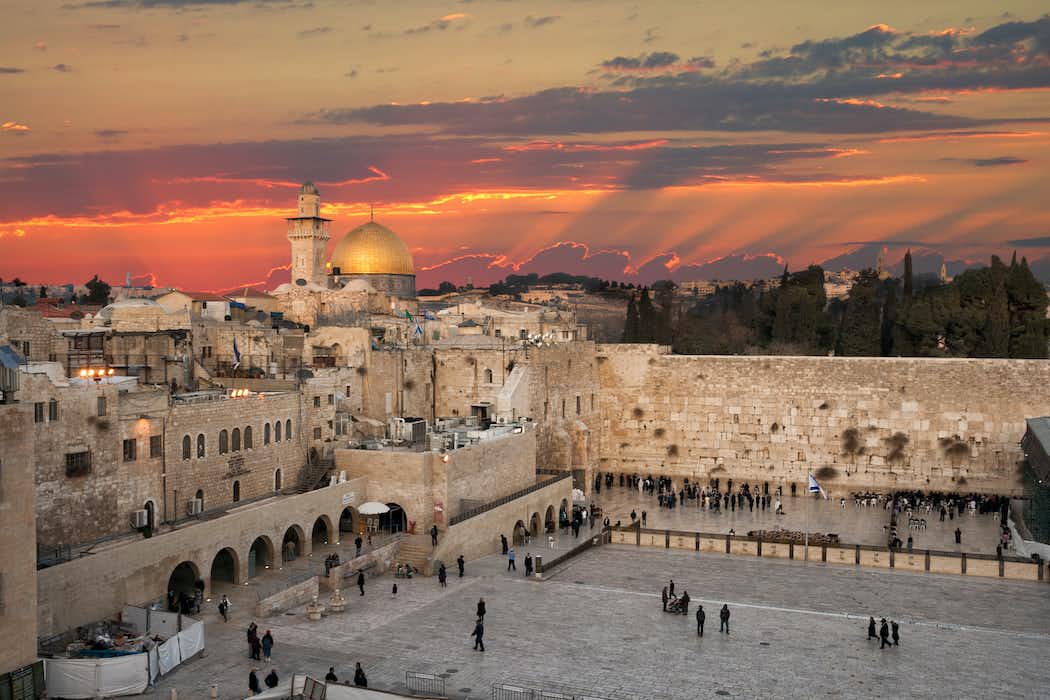 There’s a lot to say about this ancient city that’s revered by all three Abrahamic religions. And with 220 historic monuments, there’s a lot to see and do in this UNESCO World Heritage Site.

When you arrive in Jerusalem, make a bee-line for the Temple Mount in the heart of the Old City. It’s here you’ll find the city’s most iconic and important landmarks.

Dome of the Rock

One of the earliest examples of Islamic architecture, this the gold dome is arguably the city’s most recognizable landmark. The “rock” refers to the Foundation Stone, which is said to be where God created the world and Adam, and where Muhammad began his Night Journey to heaven.

This beautiful 8th century structure is the 3rd holiest site in Islam. According to tradition Muhammad ascended to heaven here. Having been used by the Crusaders and Knights Templar, there are some interesting medieval Christian elements, like the refractory. The elegant main facade is likewise a beautiful fusion of Muslim and Christian architecture, with many of the ornamental elements being taken from the city’s Crusader structures around the 13th century.

Across the plaza from the Al-Aqsa Mosque, you’ll find the single holiest site in Judaism. Also known as the Wailing Wall, it’s all that remains of the 2000-year-old Second Temple.

Not far from the Temple Mount, the Church of the Holy Sepulchre encompasses the two holiest in Christianity. This amazing example of Crusader architecture stands atop Cavalry, where Jesus was crucified, and Christ’s empty tomb.

If possible, catch the rather humble opening or closing ceremonies. Two Muslim families were entrusted with the keys to the Church of the Holy Sepulchre in the 13th century, and their descendants continue the tradition to this day. Also keep an eye out for the “Immovable Ladder”. As its name implies, it hasn’t been moved since the 18th century.

Along with these main sights, there are countless others scattered throughout the Old City. It’s well worth exploring the narrow alleys to absorb the historic atmosphere without the crowds. For an amazing overview of the city’s history, visit the Tower of David. This ancient citadel and museum details the major events in Jerusalem’s history in an amazing setting.

After having your fill of its amazing history, travel from Jerusalem to Tel Aviv, Israel’s busting seaside metropolis. 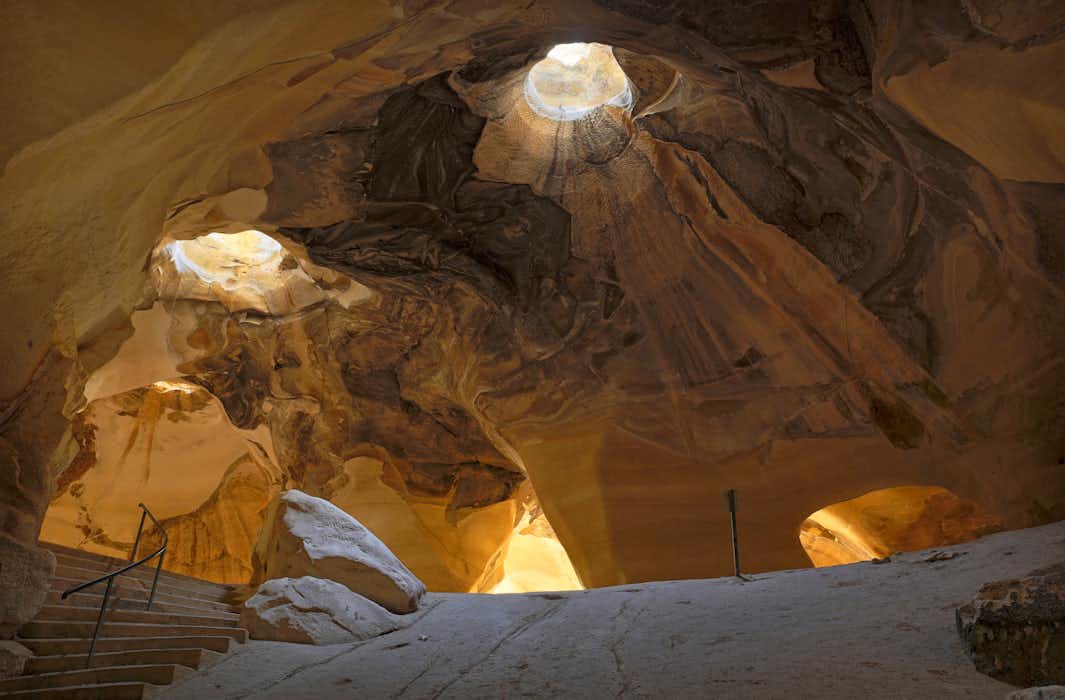 Stop for 3 hours to explore a few thousand years of history at this UNESCO World Heritage Site. Walk among the ruins of the biblical city of Maresha, and the nearly 500 caves. The Sidonian Caves, where the city’s most prominent citizens were interred, are decorated with murals of animals, fish and urns. You’ll also find the ruins of the Crusader-era St Anne’s Church, and a Roman amphitheatre and bathhouse. 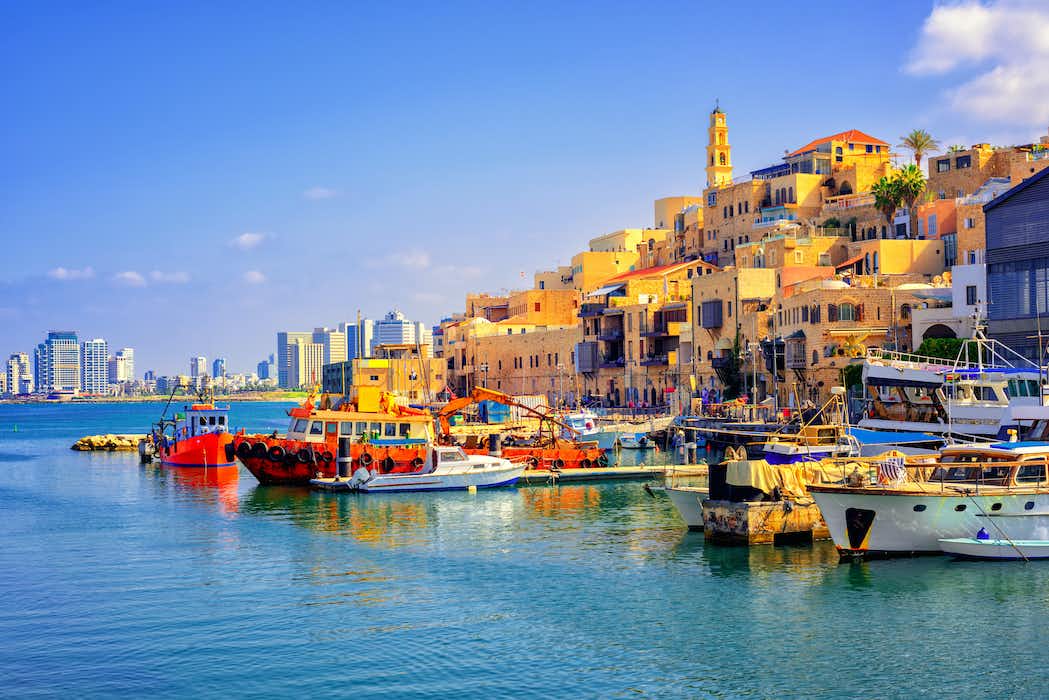 With all the modern skyscrapers and constant construction, it’s easy to forget that Israel’s most liberal city has been inhabited for over 7000 years.

The labyrinth of cobbled alleys in Old Jaffa showcase traditional Ottoman houses. Many are now restaurants, cafes, and hip art galleries. Jaffa’s famous flea markets are the perfect place to hunt for unique souvenirs. While exploring the alleys you might stumble across an entire street of young artists selling their works. While in Jaffa, be sure to seek out Hummus Abu Hassan, for what’s arguably the best in the city.

Heading towards the sea, you can glimpse the remains of an Egyptian temple. Downhill lies the port where Jonah set out before getting eaten by a whale. The 7000-year-old port is still used for fishing, though its waterfront is now lined with restaurants and fine art galleries. However, you can still get a taste of the port’s more humble side at Fish & Chips. Grab some deep fried, fresh-caught seafood (we’re big fans of the calamari) for a fraction of the price of the swanky restaurants, and walk around.

Standing in contrast to Jaffa, modern Tel Aviv is a cosmopolitan seaside resort city. Swanky hotels line the beaches, where scantily clad locals sun themselves year round. Surprisingly, Tel Aviv is listed as a UNESCO World Heritage Site for the world’s largest concentration of Bauhaus architecture. Head to Dizengoff Square and Bialik Square for some of the best examples conveniently If modern architecture interests you, we’d recommend paying a visit to the free Bauhaus Foundation (open Wed. 11:00-5:00, Fri. 10:00-2:00) to see furniture designed by Ludwig Mies van der Rohe, Marcel Breuer and Walter Gropius.

Duration: 5 hours
Book a car from Jerusalem to Tel Aviv

When you’re done with the medley of history and modernity, head up the coast from Tel Aviv to Haifa for a completely different coastal experience. 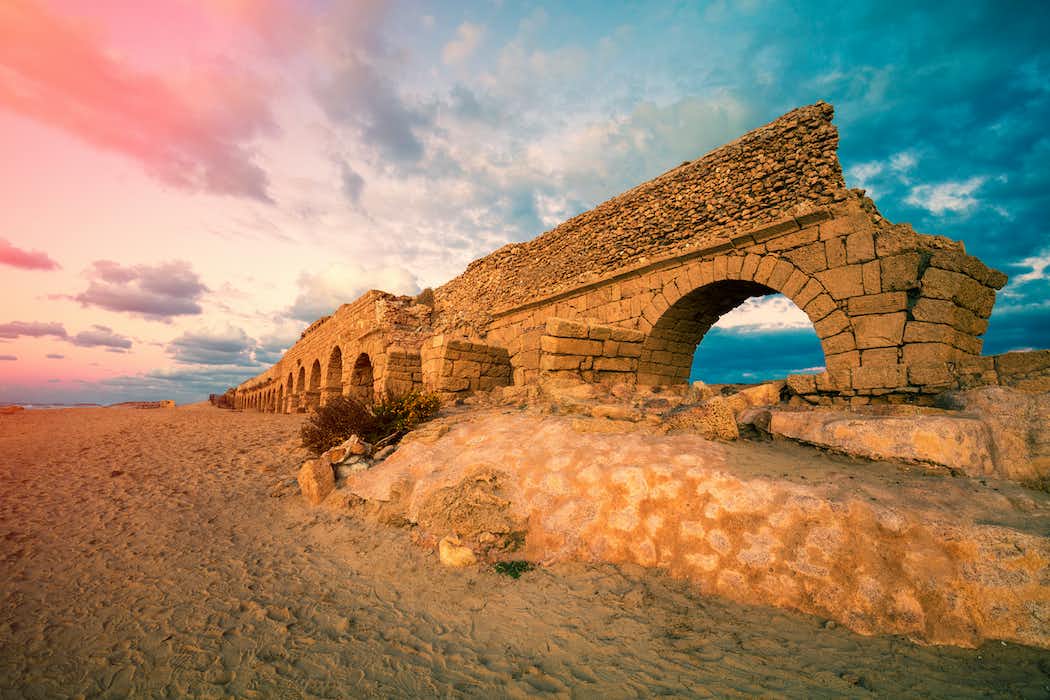 Wander the remains of what was once Rome’s provincial capital on a two-hour visit. Stroll a Byzantine street, admire a Crusader-era church, marvel at the 10,000-seat Herodian Amphitheatre, and see Israel’s oldest Roman theatre. The fascinating multimedia exhibition on the pier details ancient Caesarea’s history. You can even call the Caesarea Dive Club (04-6265898) to swim through the sunken parts of the city! 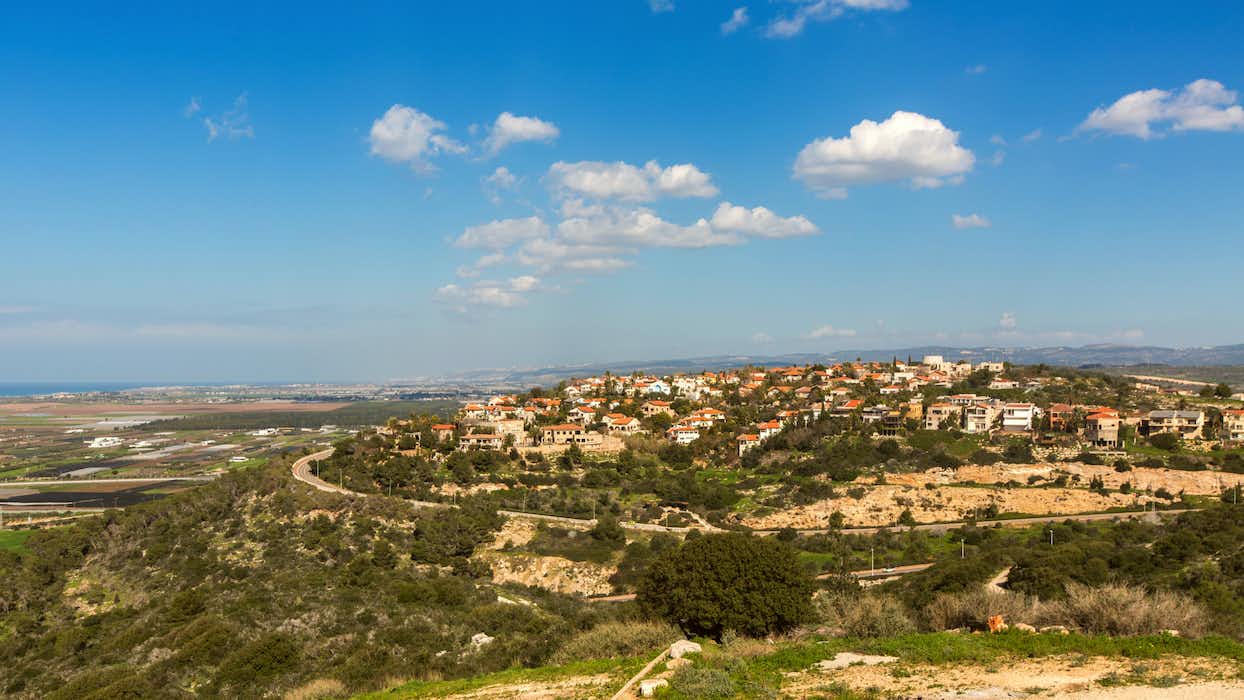 Take an hour to sample the goods in Israel’s premier wine-growing town. After almost collapsing, the French-Jewish philanthropist and winemaker Baron Edmond James de Rothschild here. Visit Carmel Winery, the oldest and largest in Israel, before wandering the beautiful (and free!) Ramat HaNadiv gardens, where the Baron and his wife are buried. 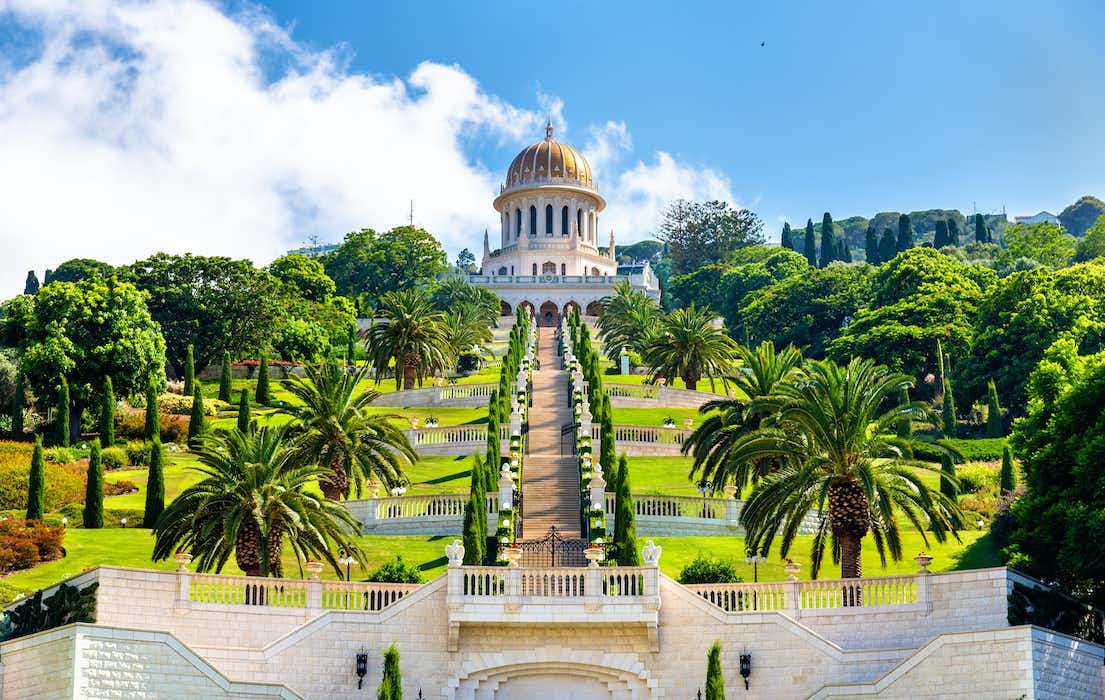 The Phoenicians, Crusaders, Ottomans, Germans and British all ruled this ancient port city over its 3500-year-history.

The port and its beautiful beaches are all modern luxury, but start heading up the slopes of Mt. Carmel and you’ll step back in history. Wander among the charming red-roofed buildings of the 19th century German colony, now an upscale neighborhood filled with galleries and cafes. At the foot of the mountain is the shrine of Elijah’s Cave, where the 9th century BC prophet is believed to have lived and taught.

The mountain is crowned by the city’s (literally) unmissable sight: the UNESCO-listed Baha’i Gardens. Take in amazing views of the coast as you meander through the 19 flora-filled terraces. At the very peak of Mt. Carmel, the Baha’i shrine is the perfect example of the religion’s egalitarian values. With architecture and design elements borrowed from multiple cultures, the burial place of the religion’s founder is just as the Baha’i describe it: a gift to humanity.

Duration: 4.5 hours
Book a car from Tel Aviv to Haifa

Once you’ve conquered the stunning Baha’i Gardens, head from Haifa to Safed to finish you tour of Israel in the country’s highest town. 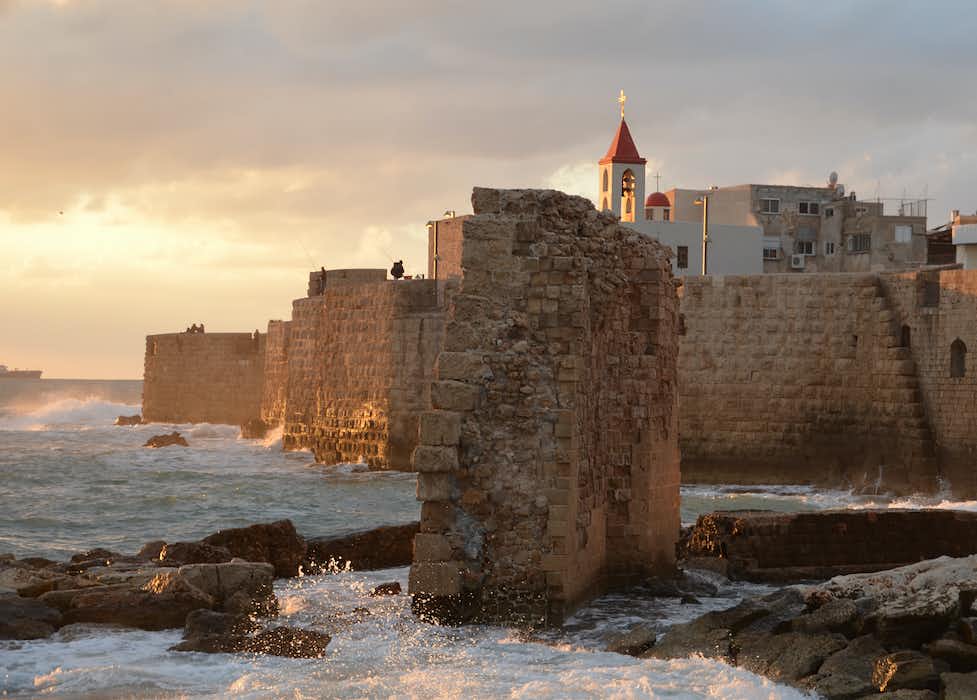 Spend three hours exploring the rich history of one of the world’s longest-inhabited settlements. The capital and chief port of the Crusader’s Kingdom of Jerusalem, Acre’s Old Town is now a UNESCO World Heritage Site for its well-preserved Ottoman architecture. After exploring the streets, step into the “Kingdom Of The Knights”. The medieval Crusader settlement was buried by sand, so now you walk its streets and buildings underground, eventually following a secret tunnel to the port. 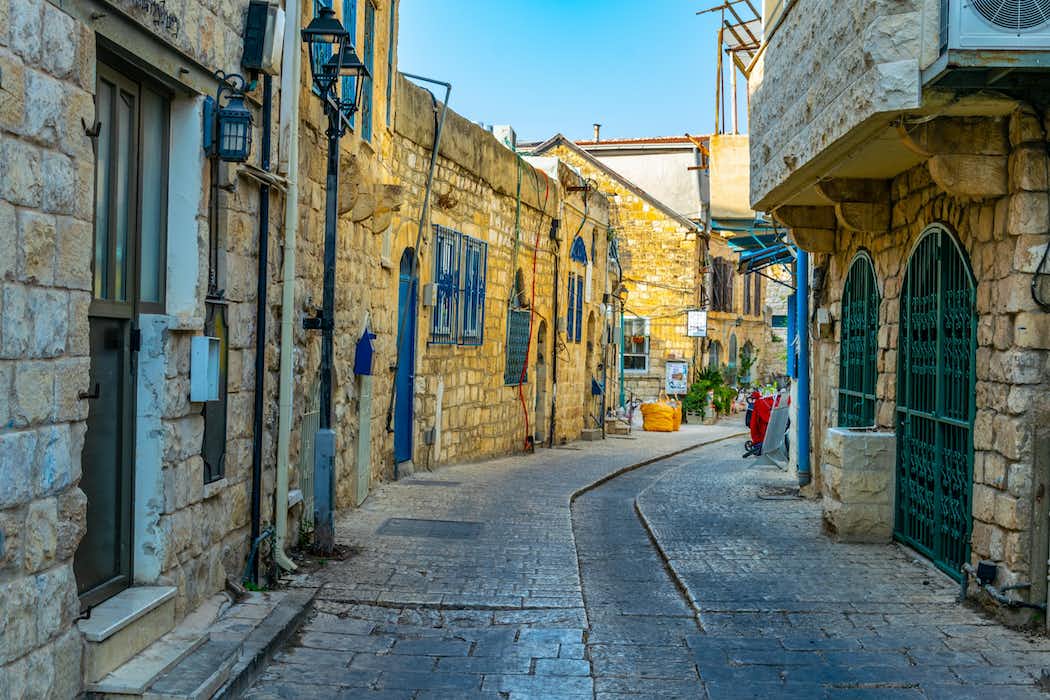 End your trip on a high note in Safed, one of Judaism’s four Holy Cities, and the most elevated settlement in Israel.

In the 16th century many Jews from Spain relocated here and made the city a center of Kabbalah. Today, the old town still has much of its 16th century character. Walk the cobbled street lined with white-washed for a glimpse of more traditional Jewish living. You’ll surely notice the vibrant blue doors and windows – they’re meant to confuse evil spirits. The town’s many synagogues are beautifully decorated with large murals. While most of the city is highly orthodox, the small Artist’s Quarter gave birth to many of Israel’s most celebrated artists and remains lined with galleries.

Duration: 4.5 hours
Book a car from Haifa to Safed

Ready for your 4-Day Tour of Israel?

Here’s each leg of our tour, so you can immerse yourself in Israel’s rich history.