This Daytrip tour is made for Mafia maniacs and mob movie buffs! When you think of Sicily, the first thing that comes to mind is The Godfather Trilogy. The 1969 book by Mario Puzo takes place in the village of Corleone, home to the famous Mafia family the story is based on.

Francis Ford Coppola shot his iconic film adaptation throughout the Italian island of Sicily. Visit the famous locations for an immersive Godfather experience with this Daytrip tour.

We’re going to make you an offer you can’t refuse. Keep reading for our “Godfather in Sicily” guide! 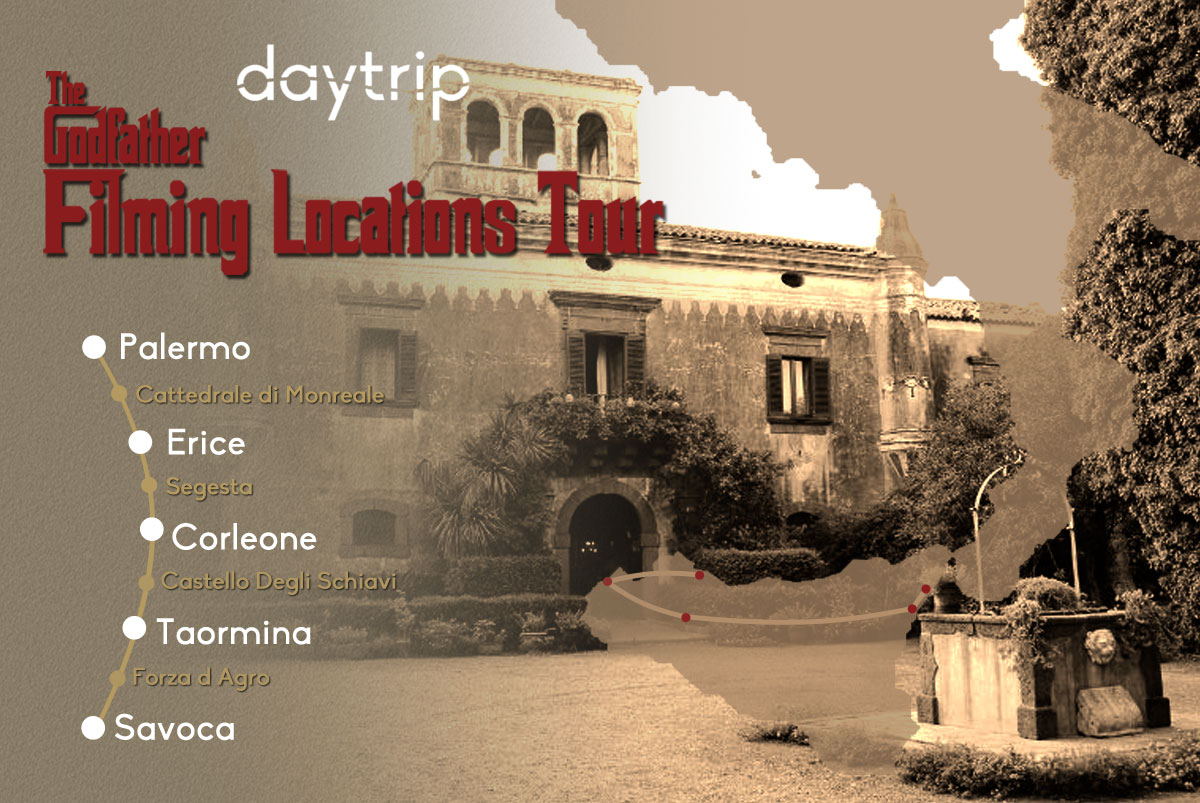 Begin your Godfather tour in Palermo, the capital of Sicily. Named the Italian Capital of Culture in 2018, this ancient city is jam-packed with beautiful churches, galleries and ancient buildings. It’s also the perfect place to gorge on Sicily’s famous cuisine. Treat yourself to pizza, cannoli, and arancini (deep fried rice balls). And any trip to Italy would be incomplete without a scoop or two of the creamiest gelato.

You can already visit some Godfather film locations right in Palermo. The late-19th century Massimo Theater is the third-largest opera theater in all of Europe. It’s also where Anthony performs in an opera, and Michael’s daughter dies on the staircase.

Head just out of town to Villa Malfitano, a 19th-century rural palace with a vast and beautiful surrounding park. It is here that celebrations were held for Michael Corleone’s son, Anthony’s, debut as an opera singer in The Godfather Part III.

When you’ve had your fill, head from Palermo to Erice to start you Godfather tour. 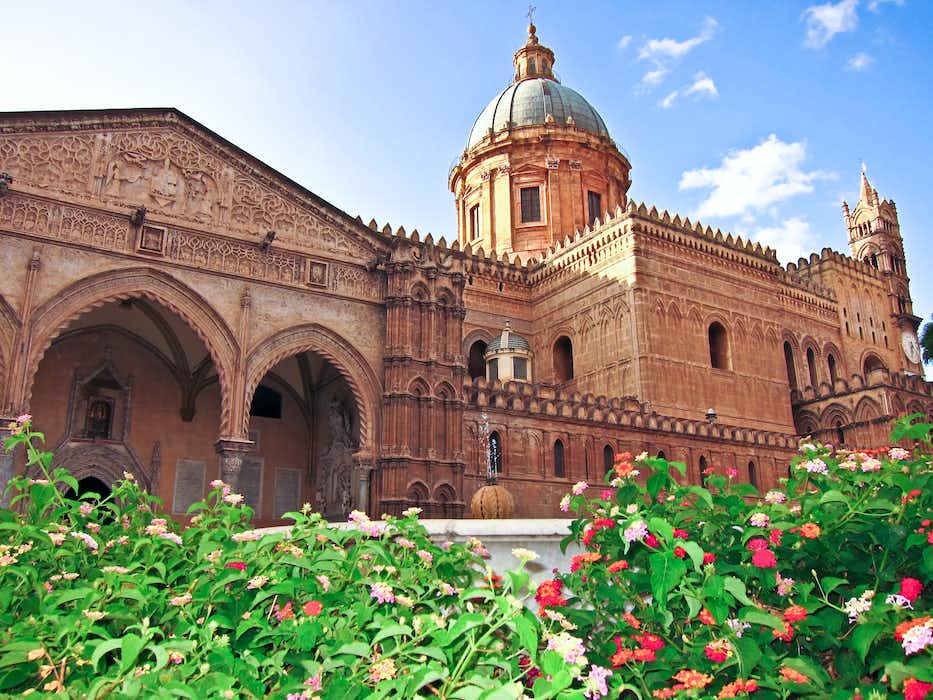 Spend 45 minutes at Sicily’s finest example of Norman architecture in Sicily, and one of the most beautiful Cathedrals in Italy. The UNESCO-listed Monreale Cathedral is decorated in Arabic and Byzantine styles and filled with an astounding 2200 kg of gold mosaics! 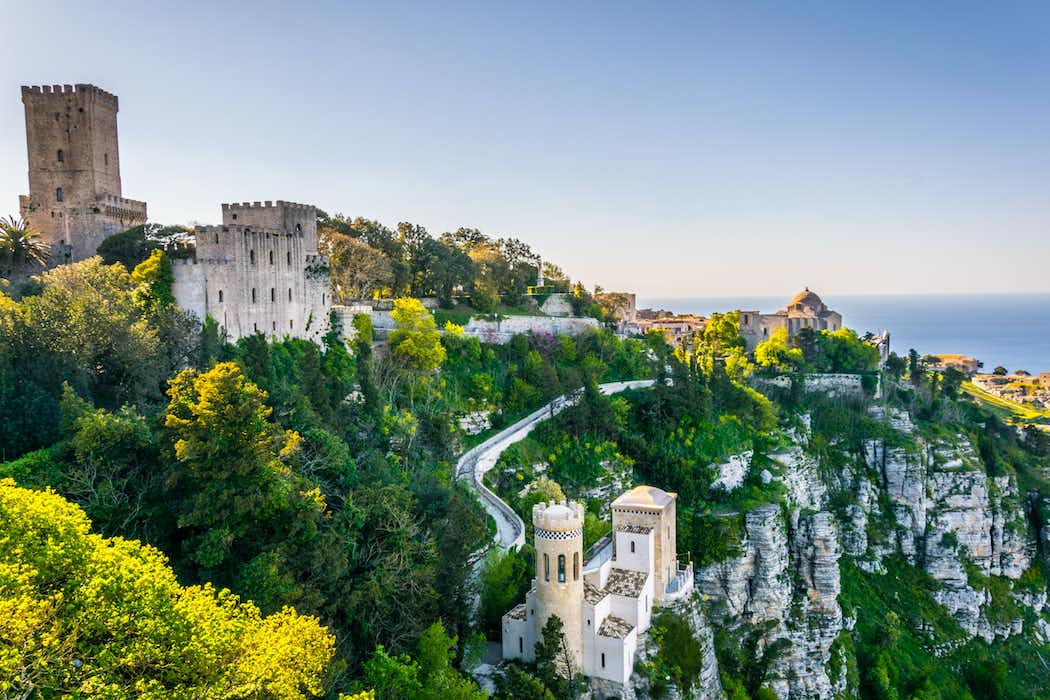 Medieval Erice watches over the port of Trapani from its beautiful mountain-top position. Though small, it’s home to a whopping SIXTY churches! From Gothic Chiesa Madre to medieval Chiesa di San Giovanni Battista, there are some spectacular religious buildings dating as far back as the year 1074.

For Godfather fans, the Baroque Chiesa di Sant’Orsola is the most important. The old church with its twin bells and vast courtyard appeared in The Godfather Part III as the entrance to the convent where Corleone meets Cardinal Lamberto.

Along with the 60 churches, Erice is home to two castles. Pepoli Castle from Saracen times and Castello di Venere from Norman times, are amongst the top sights in town and offer fabulous views of the Sicilian scenery.

Book a car from Palermo to Erice

After enjoying the amazing views and beautiful architecture, drive from Erice to Corleone, the infamous hometown of the fictional main family. 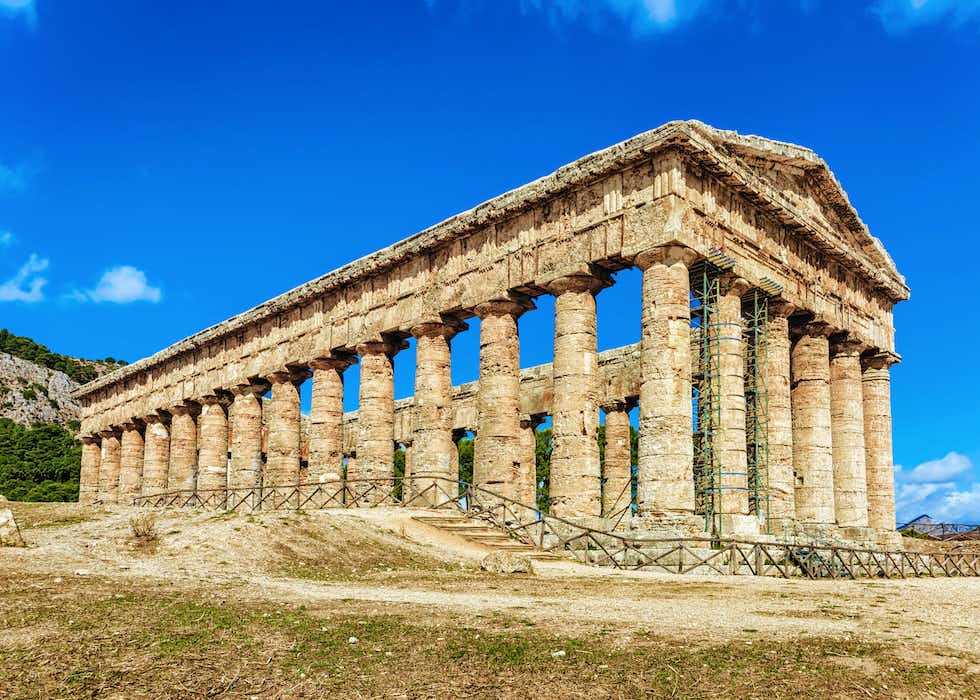 The ruins of this ancient city are one of the most important archaeological sites in Sicily. They also appeared in the very first scenes in The Godfather Part III when the Corleone family is driving to Bagheria. Examine the 36 striking white columns of the Segesta Templebefore heading further up the hill to the Greek Theatre. Partially carved in the mountain, it offers amazing views of the countryside and the temple. 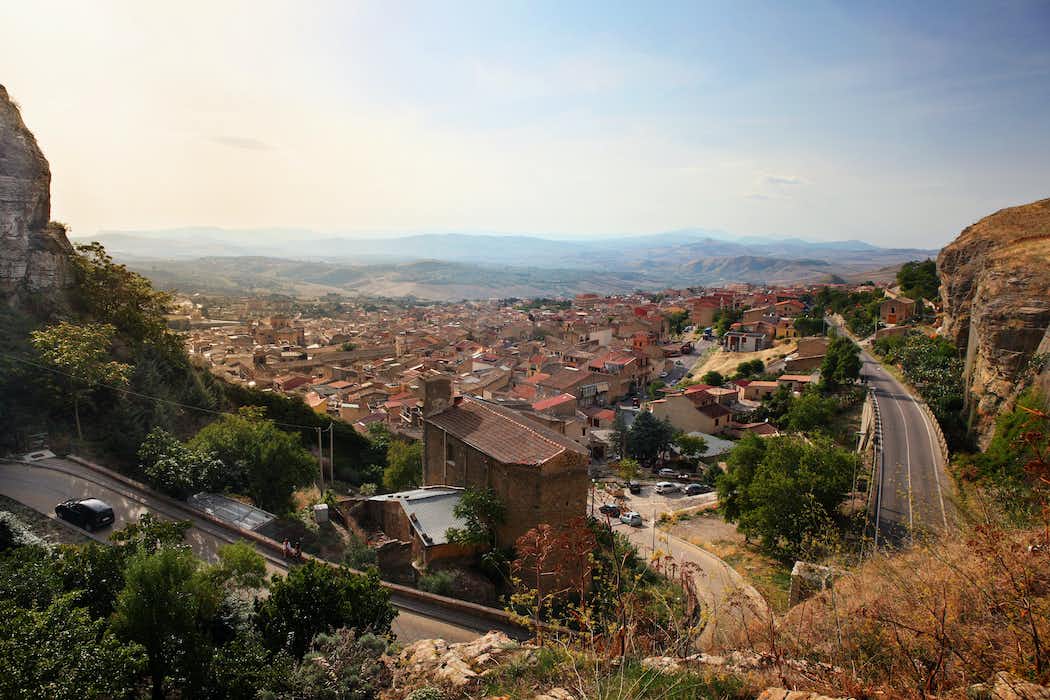 Welcome to Corleone, birth town to the eponymous and infamous Godfather family!

While Corleone plays a huge role in The Godfather story, no filming was actually done here.  Director Francis Ford Coppola thought it had become too modern to reflect the era of the Godfather.

However, thanks to the Hollywood classic, it’s a household name at the heart of so-called Mafia territory. What it lacks in screen presence it makes up for with the C.I.D.M.A Mafia Museum.

Take a tour of the museum to hear the true story of the Mafia from past to present. A series of themed rooms educate visitors about Mafioso history. Expect an informative view rather than the glorified version we see in movies.

A small museum, it has a huge collection of documents and photographs that depict real-life Mafia memories of the Corleone area and beyond. Click here for tour times and bookings.

Book a car from Erice to Corleone

After getting your mafia education, head from Corleone to Taormina. 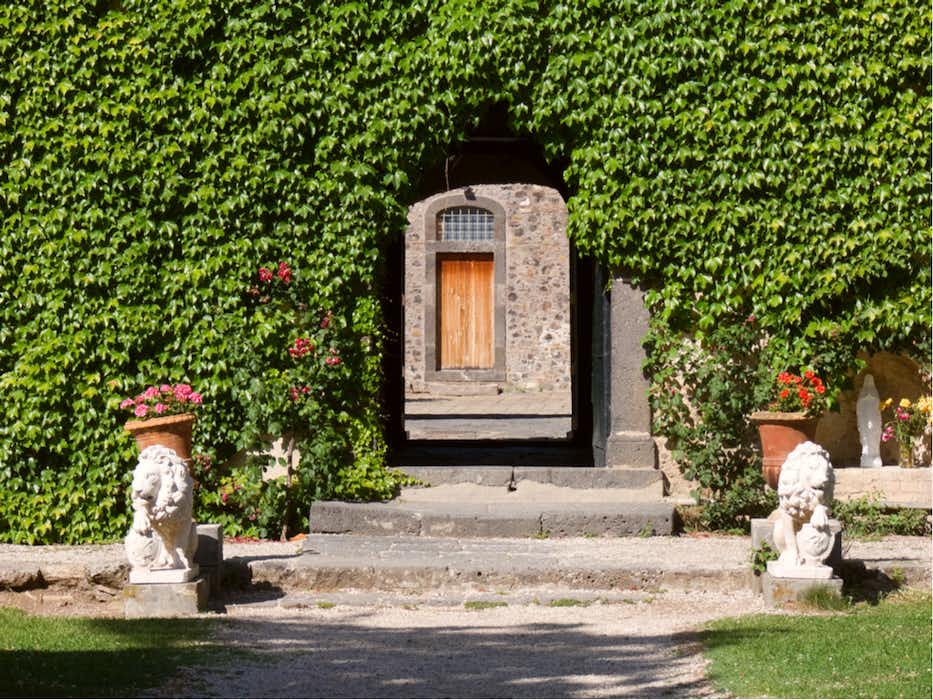 This beautiful Baroque country house appeared throughout the Godfather series. On film, the villa belonged to Don Tommasino. Spend 45 minutes at the villa where Michael Corleone taught Apollonia to drive, where her car got blown up, and where Michael died.

You’ll need to book your visit in advance, which we recommend for the chance to see the plush interior, complete with Godfather memorabilia! 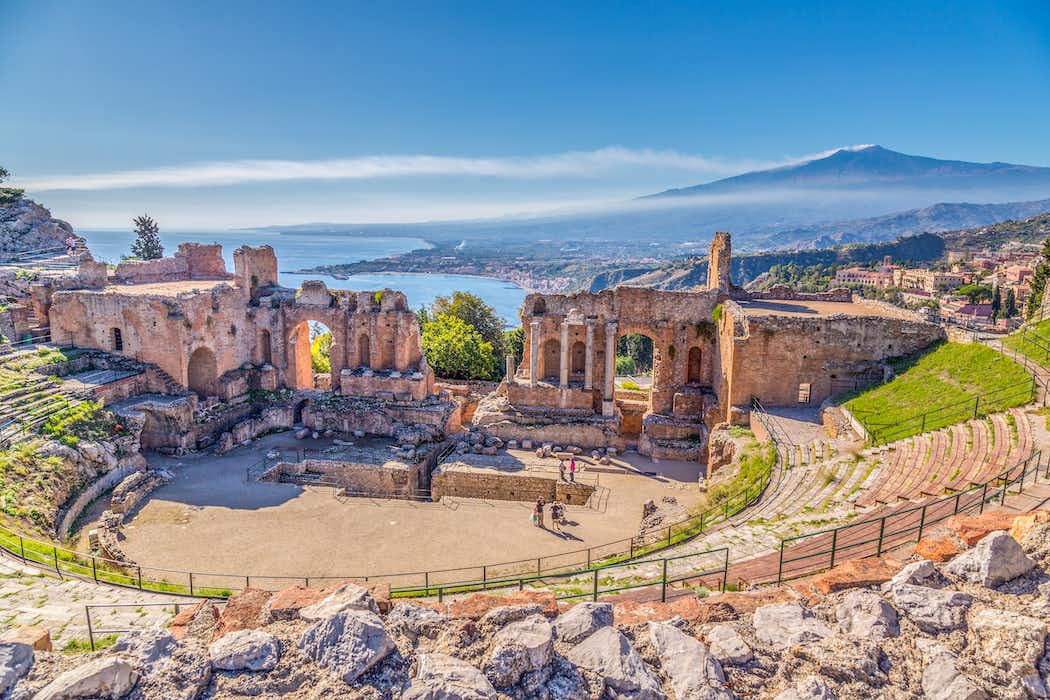 This beautiful hillside town was perhaps the most influential in the creation of the Godfather trilogy. Staff of the San Domenico Convent Hotel recommended the picturesque villages of Forza D’Agro and Savoca to Coppola. Taormina served as home base at the heart of the filming region. And in The Godfather Part III, its railway station stood in as the railway station of Bagheria.

Of course, the Godfather is just the tip of the iceberg in Taormina. Go to the ancient Greek Theatre, carved out of the rock on Mount Tauro, where on a clear day you expect to see Mount Etna and the Ionian Sea in the distance. Stroll through the public gardens in Villa Comunale for unrivalled sea views, and for the best of all Sicilian views take a hiking trip to Mount Etna.

Book a car from Corleone to Taormina

When you’re ready, set out from Taormina to Savoca for the two most iconic Godfather film locations. 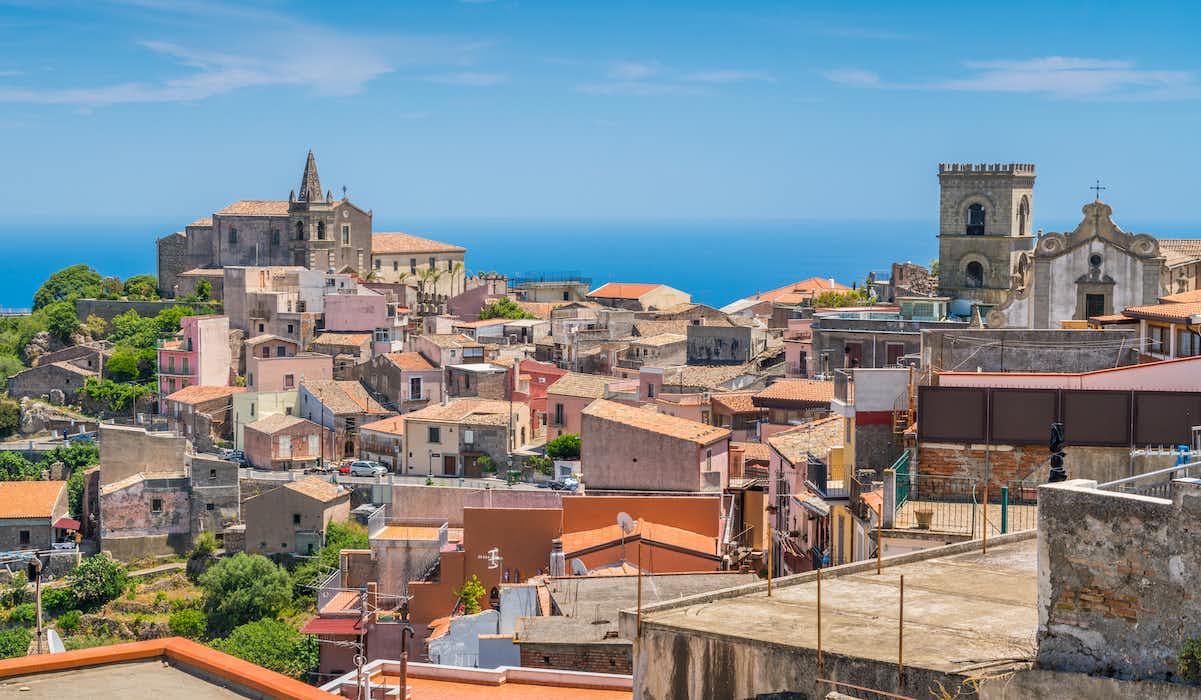 The majority of Sicily you see in the Godfather trilogy was shot here in Forza d’Agro. The rugged natural landscape was the ideal setting to represent 1940’s Corleone. Today, it’s still filled with traditional houses and buildings, and cobbled streets, watched over by a medieval fortress. Step right into scenes from The Godfather Part II with a visit to the Baroque Church of the Santissima Trinità in Piazza della Triade and the beautiful church of Maria Santissima Annunziata. Forza d’Agro is also one of few places to rival Taormina for its panoramic views.

End your Godfather tour with the picturesque town that hosted some of the most recognizable scenes.

Godfather fans flock here if just for a chance to visit Bar Vitelli. Located in the town’s charming main square, the vine-covered bar was the site of several major scenes in The Godfather Part I. It was here that Michael Corleone meets the owner of the bar, the father of his bride-to-be, and where Michael asks Apollonia’s father’s permission to marry her. It’s somewhat a shrine to The Godfather and a chance to be a part of legendary movie history. Just down the street, the Chiesa di San Nicolo is where Michael and Apollonia got married!

Godfather aside, Savoca is a town worth visiting in its own right. This ancient hill village is a true taste of authentic Sicily, atmospheric with its olde-world charm. Less touristy than neighbouring Taormina, it is just far enough off the beaten track that you won’t be battling crowds.

Book a car from Taormina to Savoca

Ready for your Godfather in Sicily tour?

Here’s each leg of our tour, so you can immerse yourself in Sicily’s rich culture, delicious food. And, of course, see the Godfather filming locations.