Zdravo prijatelji! Welcome to beautiful Croatia! The country of sea, sun and sand. Snaking all the way down the Adriatic Sea, the country is a melting pot of Mediterranean and Slavic cultures. If you’re looking for rich history and stunning scenery, a trip down the Croatian coast is the perfect getaway. The entire coast is dotted with UNESCO World Heritage Sites ranging from hanging lakes to medieval seaside fortifications.

The secret seaside playground for Central Europe for nearly a century, Croatia is now an international holiday destination. A large part of this global recognition is thanks to it being a major Game of Thrones filming location. 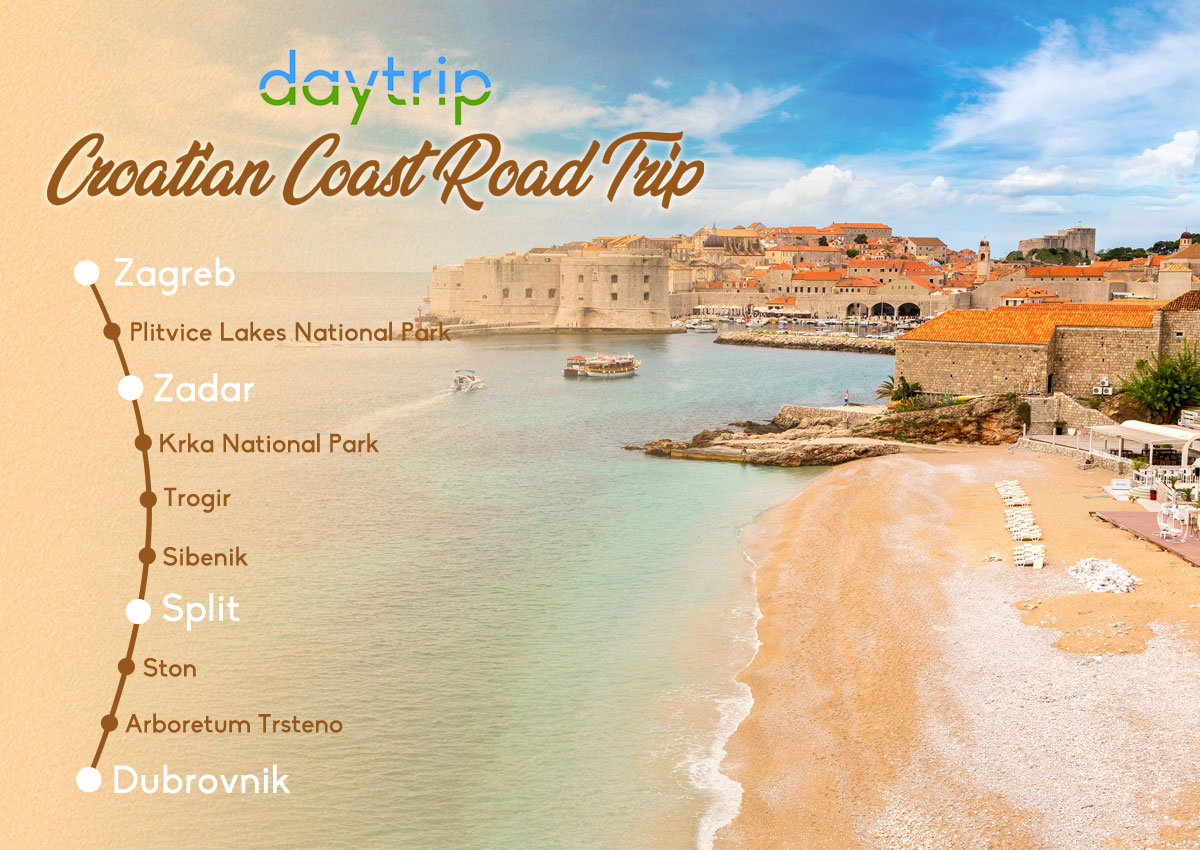 Zagreb, the capital of Croatia has blossomed into a rising cosmopolitan European city. Located along the Sava River and at the foothills of the Medvednica mountains, Zagreb’s history dates back to the Romans! The city proudly exhibits its rich history in its many museums (more per square foot than anywhere else in the world!). Then there are the many theatres, parks, and streets lined with elegant Baroque buildings. Towering over the city is the 13th century Gothic cathedral – the tallest building in the country, and largest Gothic church in southeast Europe. After getting a taste for Balkan culture, begin your journey down the Croatian coast by traveling from Zagreb to Zadar. 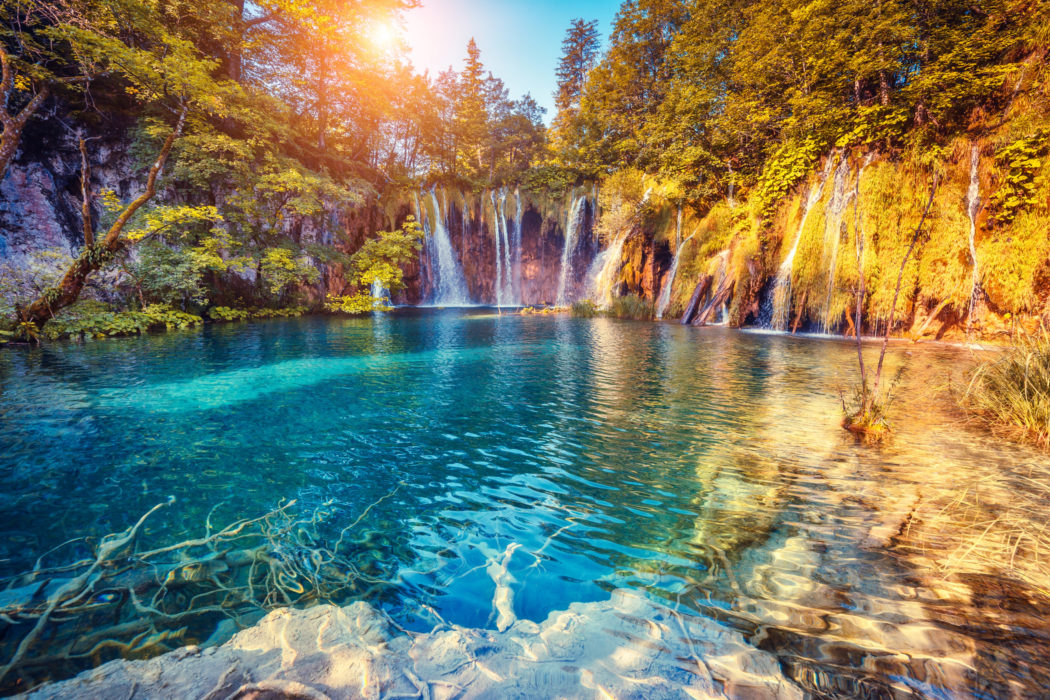 Plitvice Lakes National Park is Croatia’s oldest and largest national parks and also a UNESCO World Heritage site. Take two hours to marvel at the cascading lakes, separated by natural dams made up of travertine – calcified moss, algae and bacteria. Explore the crystal-clear lakes and the lush greenery that engulfs the grounds of this beautiful park. Please note: you must book tickets in advance here. 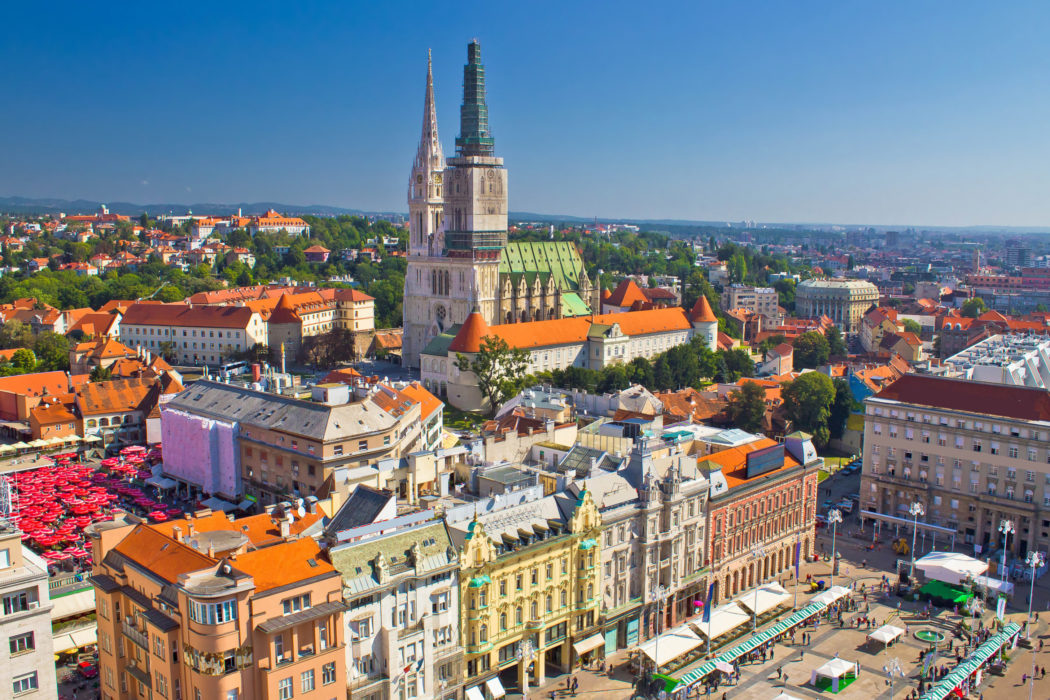 Zadar is a wildly unique city, with the urban planning of the Medieval and Roman ages being maintained until today! Built by Emperor Augustus, Zadar’s Roman forum is the largest in the Balkan Peninsula. Nearby you’ll also find the ruins of an elaborate Roman aqueduct.

While Zadar is fast becoming a resort town, it’s still the oldest city in Croatia and has a charming historic center. Perhaps even more important than the Roman ruins is the Church of Sv. Donatus. This vehemently maintained  pre-Romanesque church is the best-preserved building of its era in all of Dalmatia. The beautiful Romanesque Cathedral of Sv. Stosija is also worth a visit. It’s the largest cathedral in the region. The nearby Church of Sv. Francis is relatively unadorned, but holds a wonderful choir, and was where the Zadar Peace Treaty was signed in the 14th century.

While exploring the Old Town’s peninsula, you also have the chance to enjoy the fresh seafood dishes the Croatian coast is known for.

Duration with stops: 5 hours and 43 minutes

Book a private car from Zagreb to Zadar

After getting a taste of the oldest inhabited city in Croatia, further down the coast from Zadar to Split. 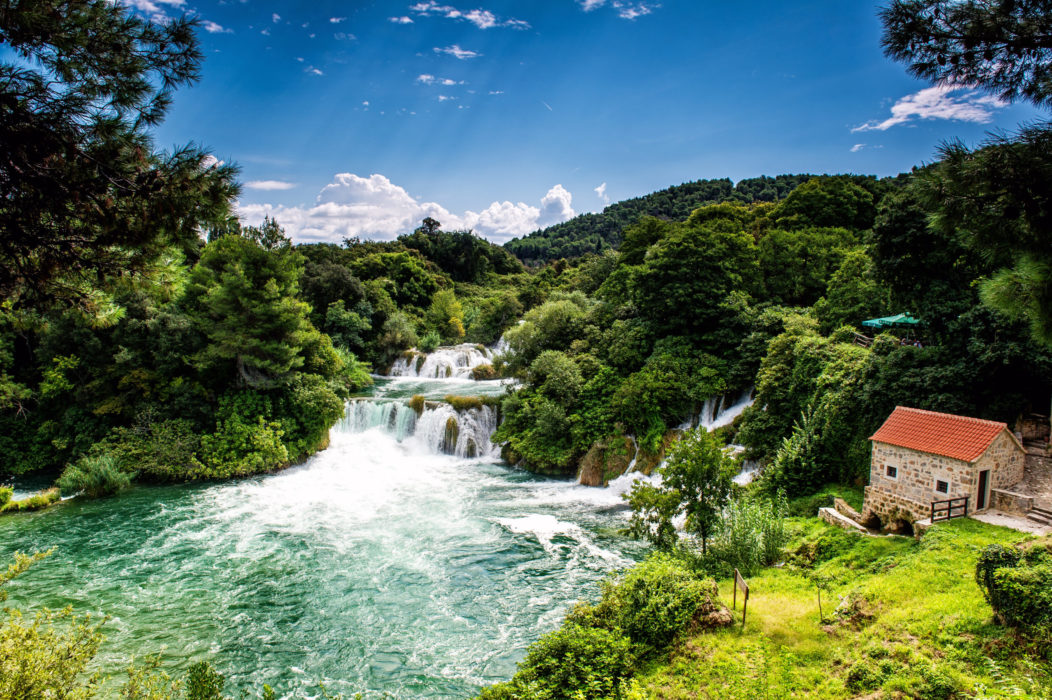 The magical Krka National Park is unique in Croatia. Take two hours to discover its amazing biodiversity, and relax by one of the seven stunning waterfalls. And then do something you can’t do in any other national park in Croatia: go for a swim! 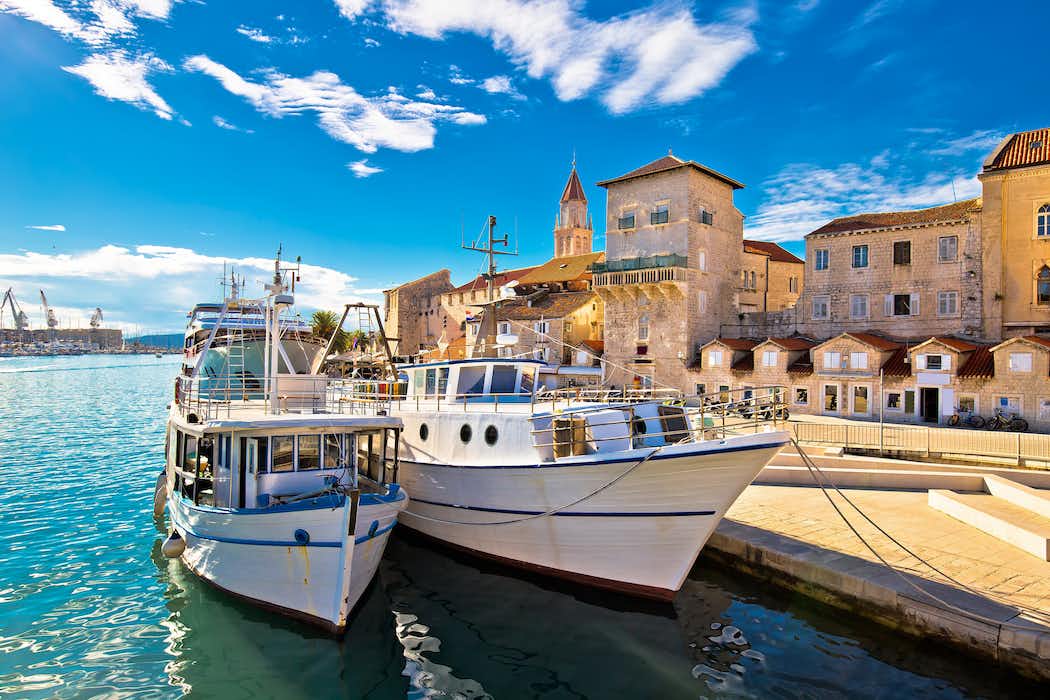 This historic center of this little island town is a UNESCO World Heritage Site chock-full of Romanesque, Baroque and Renaissance buildings. Take 90 minutes to wander its streets, down cobbled alleys and seaside promenades. 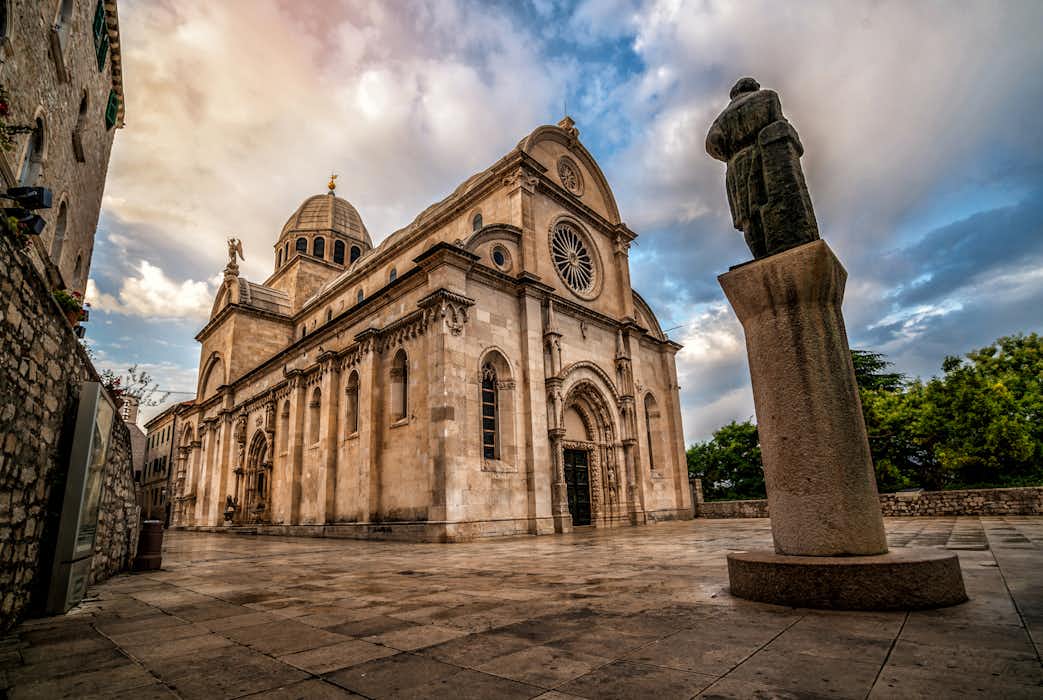 Located where the Krka River flows into the deep blue Adriatic Sea, Sibenik is the oldest native Croatian town on the Adriatic coast. Spend 90 minutes exploring the town. Visit the fortifications, where you can view the beautiful Cathedral of St. James, a UNESCO World Heritage Site. The finest piece of Renaissance architecture in the country, the Cathedral even appeared in Game of Thrones! 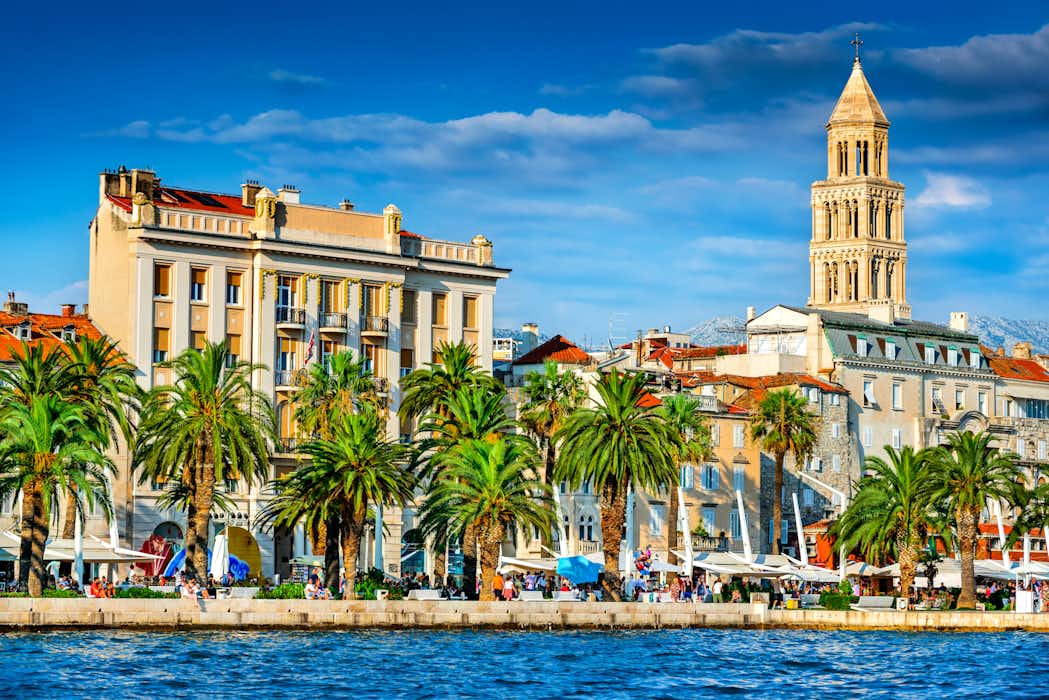 Founded by the Greeks, Split became a prominent city during the Roman Empire. However, Split’s most prosperous era came during the Venitian period. Split’s magnificent historical centre is a UNESCO World Heritage Site with an eclectic array of architectural styles. Wander among traditional Dalmatian houses as you seek out landmarks ranging from the 4th century Diocletian’s Palace, to the Neo-Classical  Prokurative square. For the best views in town, climb to the top of the Bell Tower of Sv. Domnius Cathedral.

Duration with stops: 5 hours and 47 minutes

Book a private car from Zadar to Split

For the last leg of your journey down the Croatian coast, head from Split to Dubrovnik, one of the most stunning towns on the Adriatic. 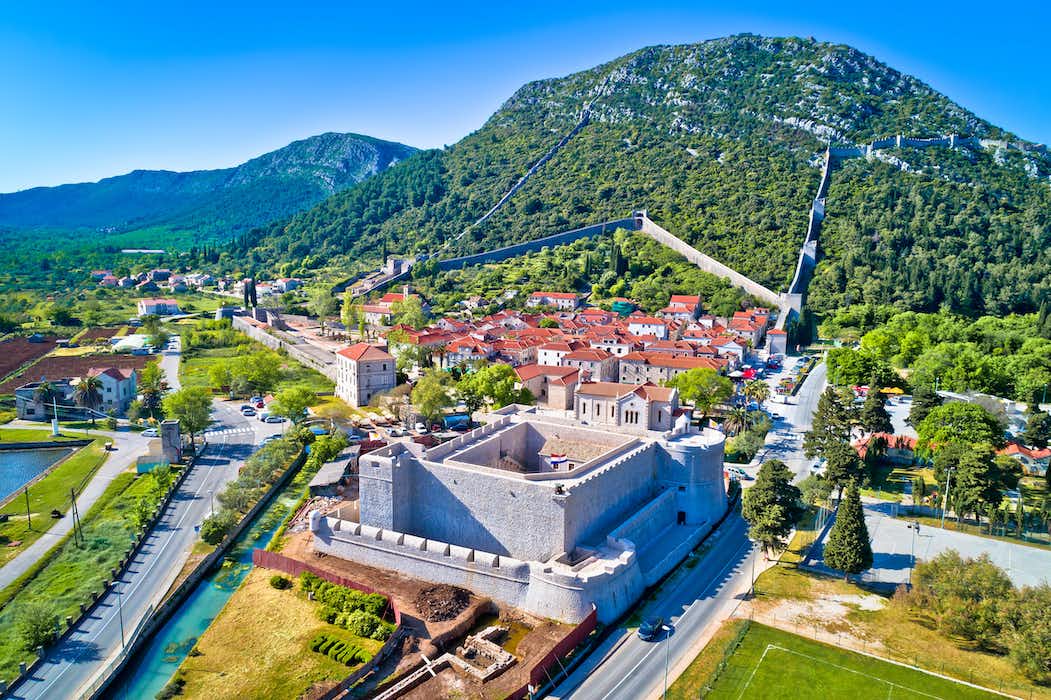 Ston may be small, but it has a big reputation! On your 1 hour visit, explore the Walls of Ston — the largest fortress system in all of Europe, and second to the Great Wall of China. The Walls of Ston are also amazing for their restoration process: any new stones were hand-carved just as they were back when it was first built in 1334.

You might not know it by name, but this 15th century garden is probably one of the most famous green spaces on the planet. Hugging a hill overlooking the sea, you’ll find flora from around the world as you explore its verdant pathways for an hour. If you’re a Game of Thrones fan, the arboretum is doubly delightful as it doubled as the King’s Landing gardens! 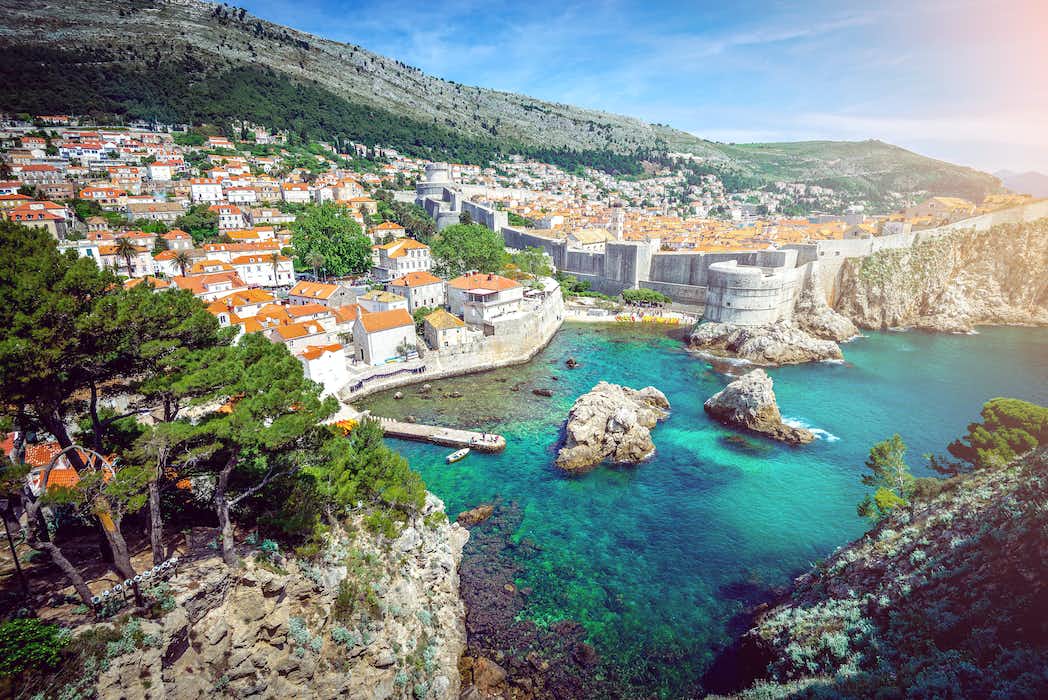 Ah, yes. Dubrovnik. The Pearl of the Adriatic. The one-time maritime capital of the Republic of Ragusa is renowned for its perfectly-preserved Old Town.The cobbled streets and red-roofed houses are ensconced behind imposing fortified walls. Throughout the town you’ll find historic churches, but the Sv. Blaza church is arguably the best. Here you’ll find Corinthian columns, Greek crosses and the beautiful Baroque interior. After exploring the streets of the Old Town, Head to Dubrovnik Bay for a view of the island of Lokrum, where there is a fortress, botanical garden and a monastery! And if you get hot, take a dip at one of the many small beaches that dot the city’s waterfront.

Dubrovnik is also the site of the famous show, Game of Thrones. For more information on these, look at the Game of Thrones locations you can actually visit. Be warned though, some of these are outside Croatia and might inspire another vacations!

Duration with stops: 5 hours and 35 minutes

Book a private car from Split to Dubrovnik

If you can’t get enough of the Balkan coast, extend your trip and head from Dubrovnik to Kotor, Montenegro! 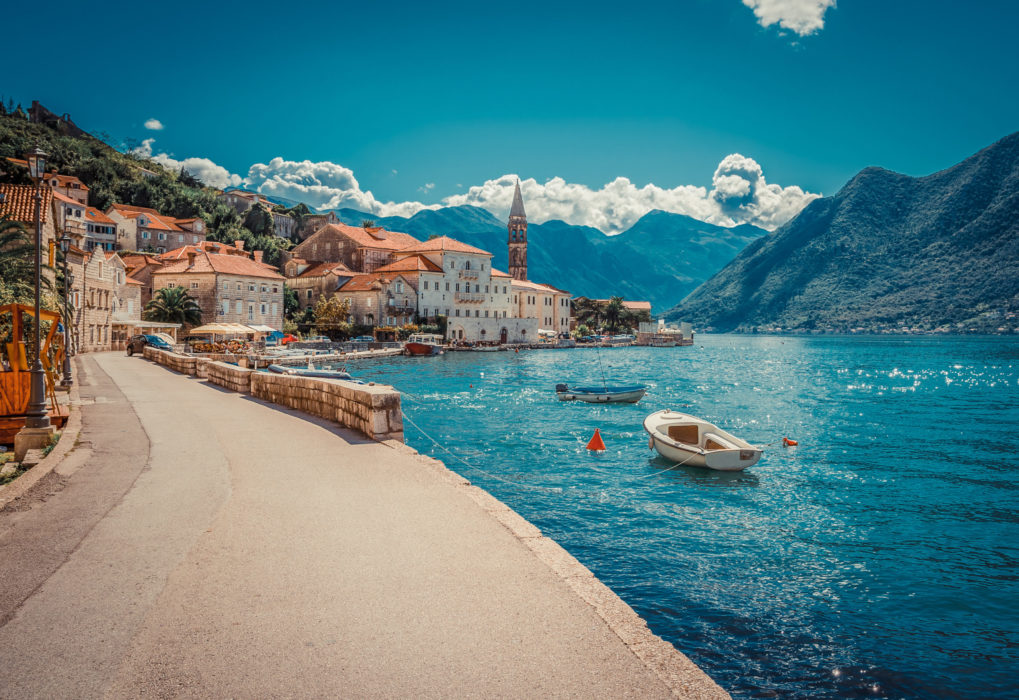 For a dose of seaside charm, 90 minutes in the tiny town of Perast is hard to beat. A UNESCO World Heritage Site, it has only one road, which runs along the waterfront. This lone street is lined with beautiful Renaissance architecture, which is why it’s sometimes called a slice of Venice. For the best vantage of the old town and blue waters of the Bay of Kotor, head to the Sv. Nikola church up in the foothills. 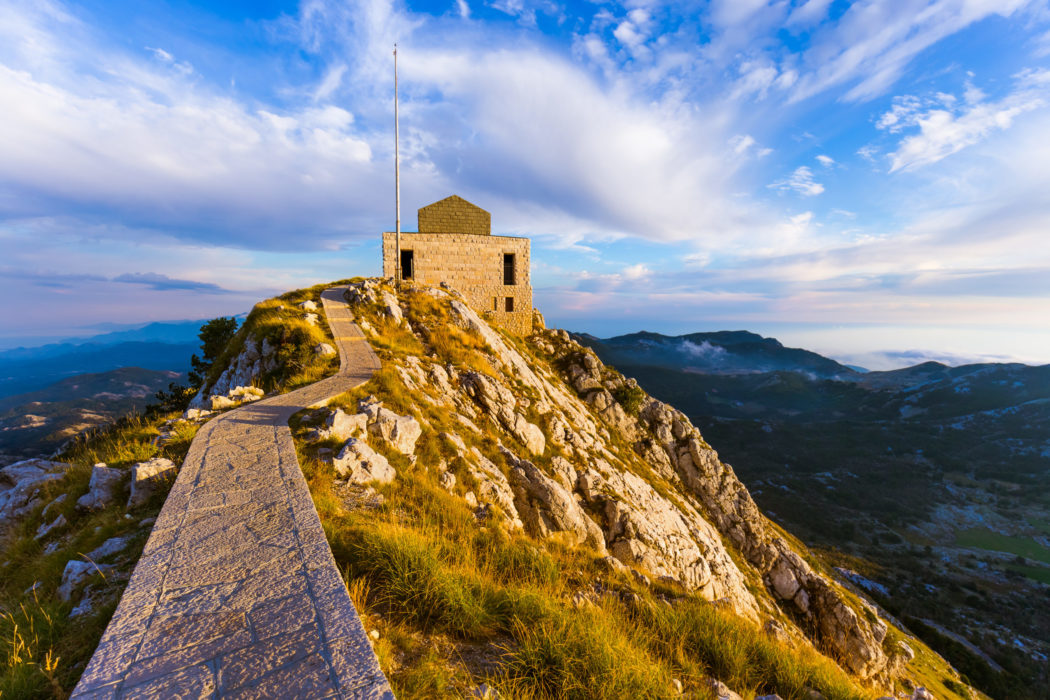 For Montenegrans, few places hold the significance of Lovcen National Park. The symbol of the country and origin of its name (Black Mountain), spend an hour at the summit to take in a panoramic vista across nearly the entire nation. Adding to its importance, the mountaintop is also the final resting place of Petar II Petrovic-Njegos, one of the country’s greatest and most loved rulers. 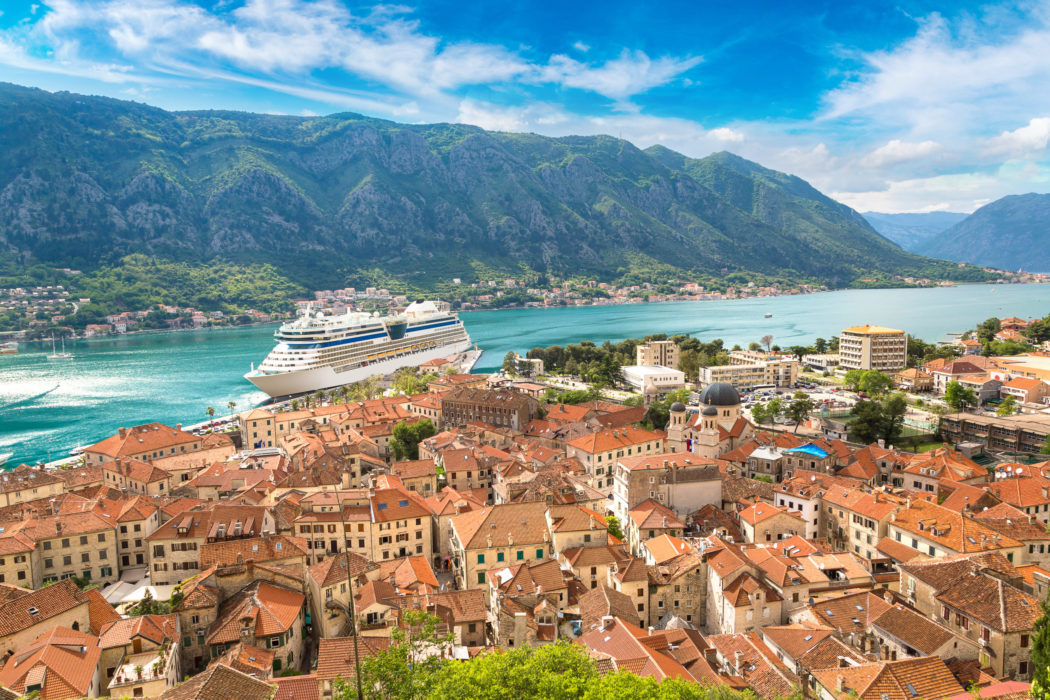 Kotor is one of the best-preserved medieval towns in the Balkans, and is a double UNESCO World Heritage Site! Wandering among the red-roofed houses, you’ll stumble across amazing Venetian palaces and historic churches. If you only visit one, make sure it’s the 12th century Cathedral of Sv. Tripuna. Inside you’ll find 14th century relics and beautiful frescoes. For some quirky fun, you can visit the cat museum, an ode to the city’s large cat population (you’ll see plenty one your explorations) and the culture of respect to cats that the city has.

Kotor’s other reason for UNESCO recognition is the impressive Venetian defense system. Starting in the bay, the fortifications run all the way up the mountain overlooking the town. The nearly 1500 steps to the top is sure to leave your legs sore, but the views are well worth the effort.

Duration with stops: 6 hours and 25 minutes

Book a private car from Dubrovnik to Kotor

Ready for your Croatian Coast tour?

If we got you longing for some history by the sea, here are the links for each leg of our Croatian Coast tour.