If you’re looking to experience Bavaria’s rich history with a fairytale atmosphere, the Romantic Road has it in spades. Half-timbered houses overflowing with flowers along cobbled streets fill nearly every town along this 220 mile (354 kilometers) route. And then there’s the road itself, which passes through a countryside dotted with lakes and vineyards backed by the soaring Alps.

While the towns on the Romantic Road date back centuries, the tourist route itself is quite recent. Following World War II, Germany was desperate to rebuild its tourism industry, and so they organized a formal “route” to show off Bavaria to the friends and families of American soldiers stationed in Bavaria and Baden-Württemberg. The trail from Würzburg to Füssen soon became wildly popular, and today attracts visitors from around the world (and plenty of Germans too!).

Why is it called the Romantic Road?

The Romantic Road doesn’t just get its name because of the charms of Bavaria’s historic cities and walled medieval towns filled with half-timbered houses and colorful flower boxes. It’s quite literally the ROMAN-tic Road, (loosely) following the Roman route between towns with a couple extra medieval locations thrown in for good measure. 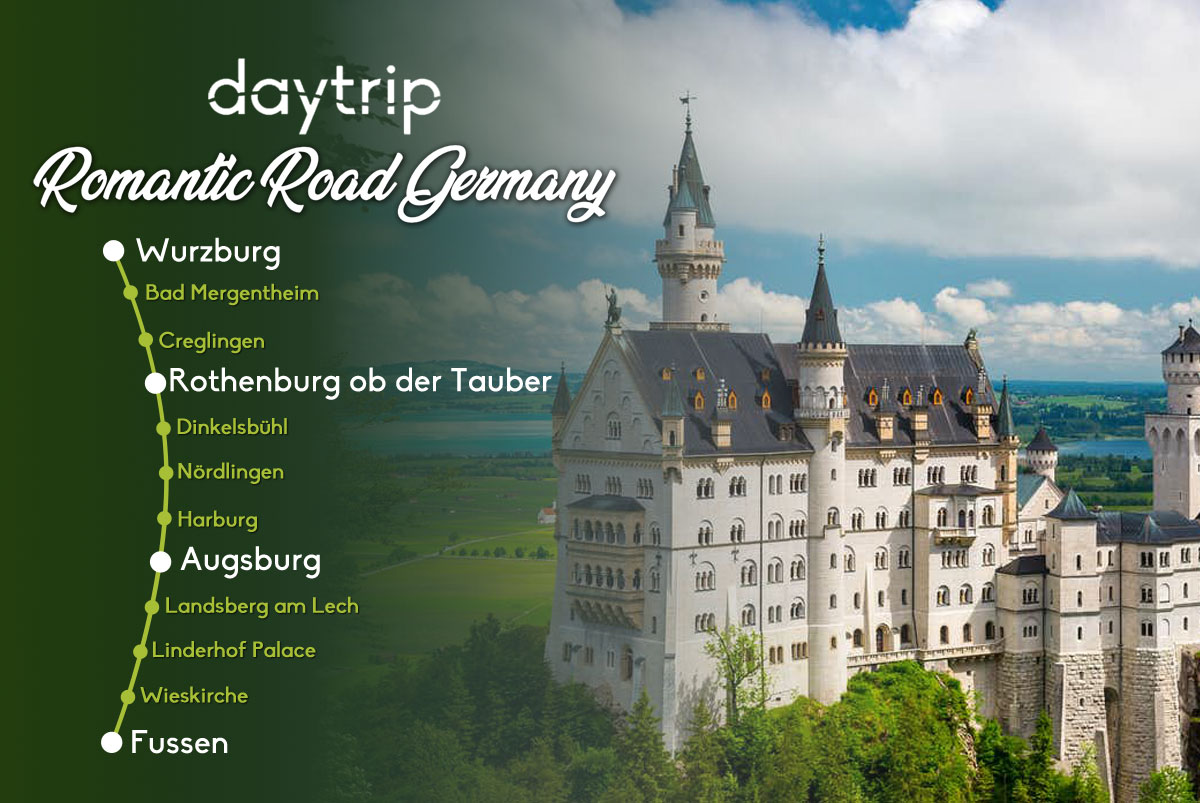 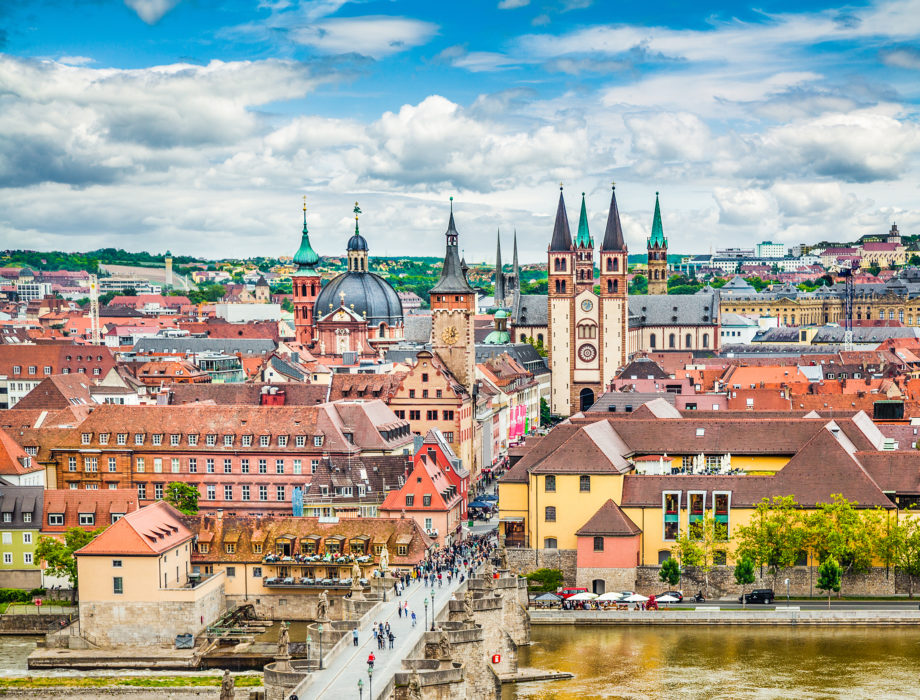 Start your journey down the Romantic Road in the charming capital of Germany’s biggest wine producing region. A poster-child for post-war recovery, Wurzburg is awash in Gothic, Baroque, and Rococo monuments, which you can admire while wandering the cobbled streets of its Old Town.
The Old Town is also a great setting to immerse yourself in Franconia’s 2000-year-old winemaking tradition. While most associate Reisling with German wine, Franconia specializes in Silvaner, Bacchus (a “wine for women”), and Müller-Thurgau, which often come in the unusual Bocksbeutel elliptical bottle. Then there’s the Rotling, where vitners treat red grapes as if they were white to produce a fragrant rose.

The creme-de-la-creme of Wurzburg’s attractions is the hilltop Residential Palace, a UNESCO World Heritage site, and perhaps the finest Baroque palace in Germany. With richly decorated halls, and equally gorgeous gardens, this is Germany’s answer to Versailles in France and Schönbrunn Palace near Vienna. And as an added bonus, it offers an amazing view of the town below and vineyards beyond. 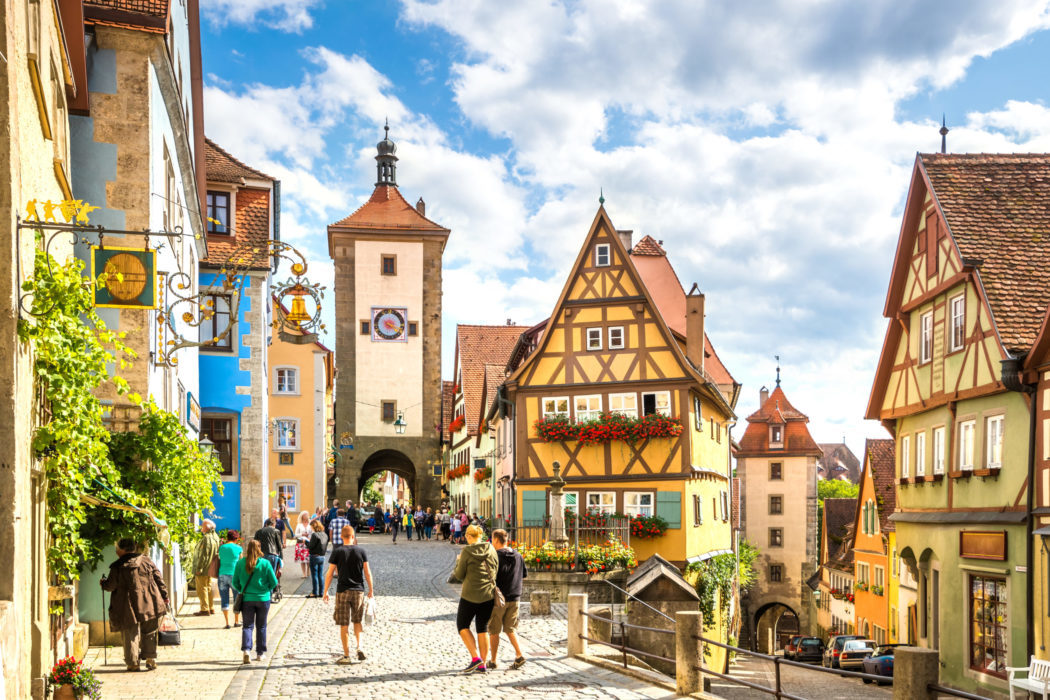 After treating your eyes and taste buds to Wurzburg’s romantic offerings, set a course for Rothenburg ob der Tauber for more Bavarian charm. 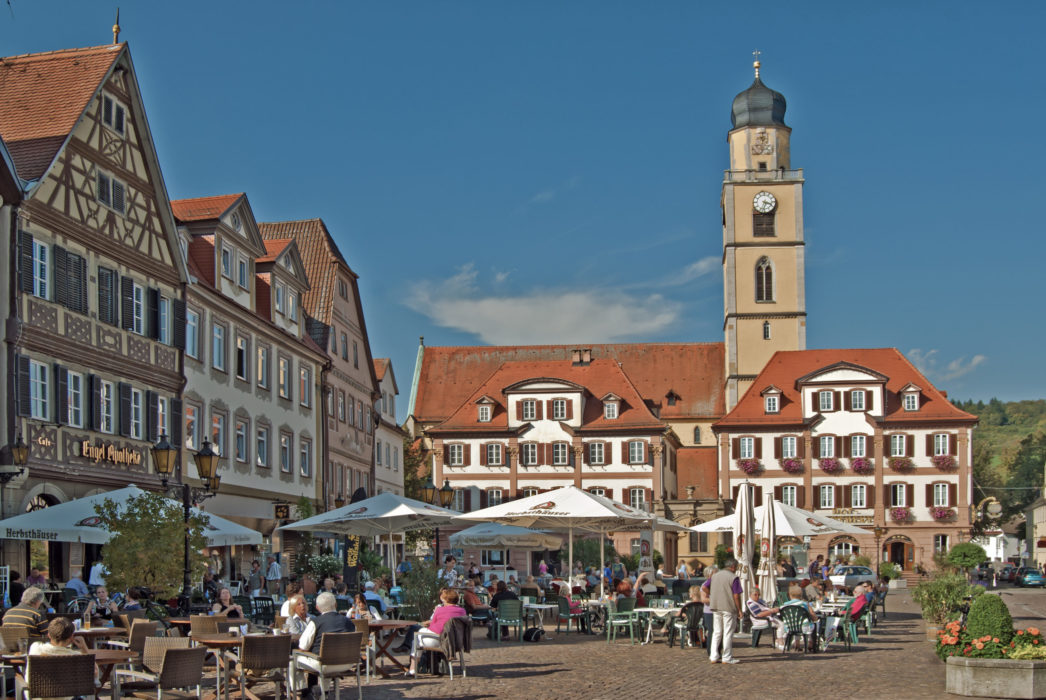 Bad Mergentheim is famous for two things – being the medieval seat of the legendary Teutonic Knights, and natural spas with the most potent mineral water in all of Europe. The cobbled lanes of the Old Town radiate out from the central market square. Lined with historic buildings, the 16th century Town Hall and fresco-filled, 13th century Minster St. John Church dominate the square. But the real highlight is the Castle of the Teutonic Order. Here you can admire richly furnished rooms, and learn about the legendary Teutonic Order in the museum. Or you can just take a romantic break and unwind at one of the town’s spas by soaking in Europe’s strongest sodium-sulfate water. 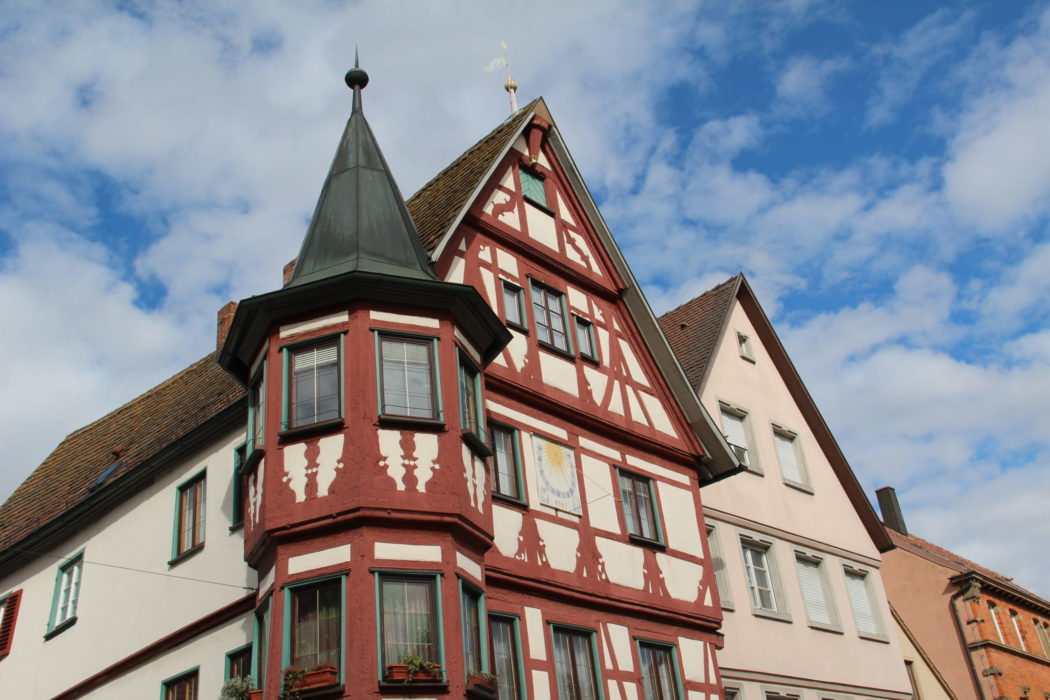 Filled with cute half-timbered houses built along cobbled streets, Creglingen seems a typical Bavarian city at first glance, and makes for a pleasant place to wander. Though the Thimble Museum and its thousands of ornamental thimbles makes for a quirky visit. But Creglingen is not quite a sleepy provincial city. The 14th century chapel on the outskirts of town is actually an international pilgrimage site, said to have been built on the spot where a farmer found an undamaged communion wafer while plowing a field. Inside are a slew of late-Gothic altars, including the intricately carved Marienaltar by Tilman Riemenschneider – world’s greatest works of religious art.

Even before you reach the city, Rothenburg ob der Tauber will have you gawking at its forty-two gates and towers standing against the unspoiled countryside from a distance. On the inside, it seems almost too enchanting, like some sort of Medieval recreation. A tourist destination since the 19th century, it’s essentially been frozen in time. Heck, even Nazi’s visited on field trips, and Allied forces did their best to spare it from destruction. Along with exploring the cobbled lanes, be sure to head up the Town Hall Tower and take a walk around those fortified town walls. 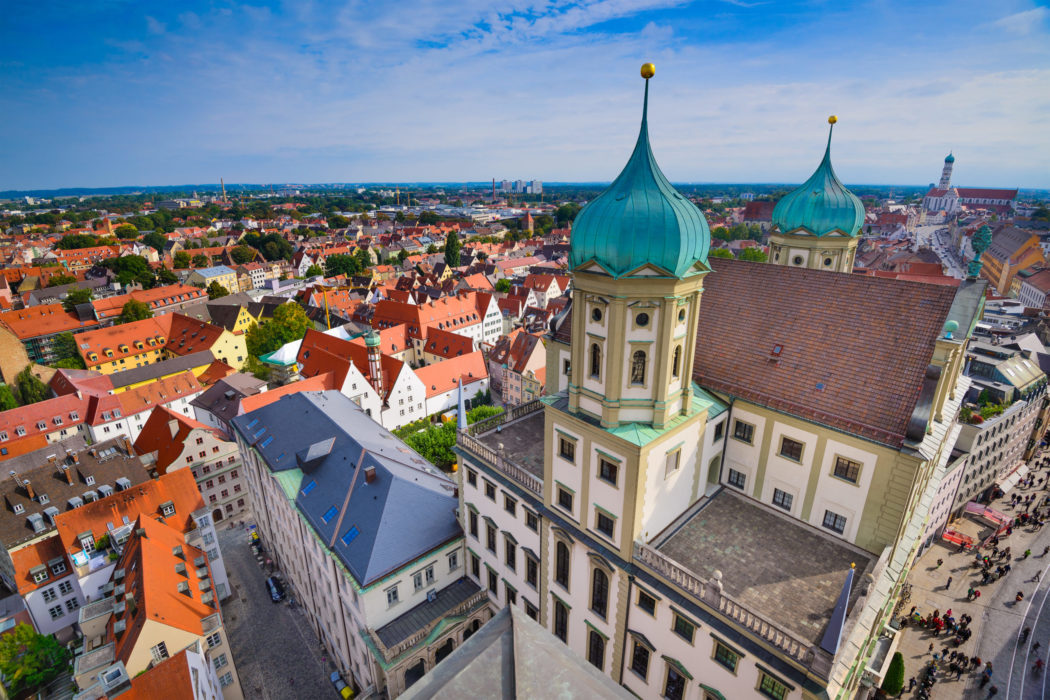 After experiencing the medieval fantasy that is Rothenburg ob der Tauber, head south to Augsburg for a survey of Bavarian history. 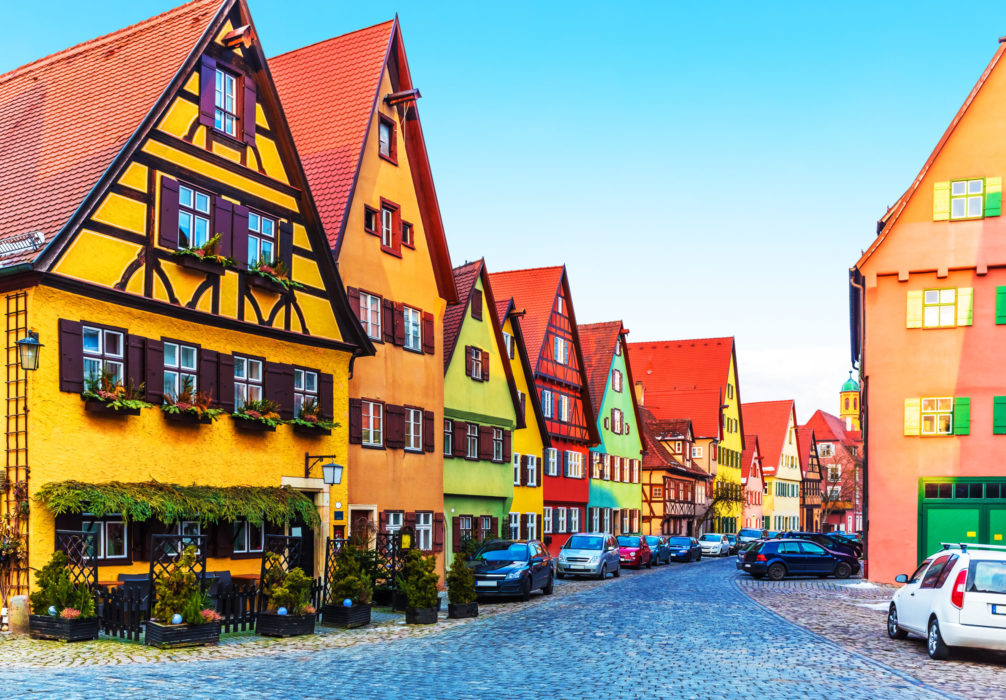 Founded in the 8th century as a royal residence of the Carolingian kings, Dinkelsbuhl is one of the oldest towns in Germany, and perhaps the best preserved. To this day, every July it celebrates surrendering to the Swedish in the 17th century. This, along with being spared from bombing during World War II, allowed its medieval buildings to survive. The Old Town is a vibrant delight to explore, with the half-timbered and gabled houses lining the cobbled streets painted in an explosion of colors. Dinkelsbuhl is also one of only 3 walled towns left in Germany, so be sure to walk the battlements, and don’t miss the 15th century St. George’s church (it’s visible from pretty much everywhere) for its 6 magnificent altars and fantastic views of the town and countryside from the bell tower.

Nördlingen is perhaps one of the most unique towns on the Romantic Road. It is the 3rd of the surviving walled towns, built inside the crater left by a prehistoric meteor impact. The force of the impact formed micro-diamonds in the local stone. If you look closely at Nördlingen’s charming medieval houses, you can see them sparkling in the sun. Along with walking the town walls, don’t miss the iconic 15th century St. George’s Church, and its bell tower ‘Daniel’. The walls contain an estimated 5000 carats of micro-diamonds. From the top of the bell tower take in the panoramic view used in the original Willy Wonka and the Chocolate Factory. 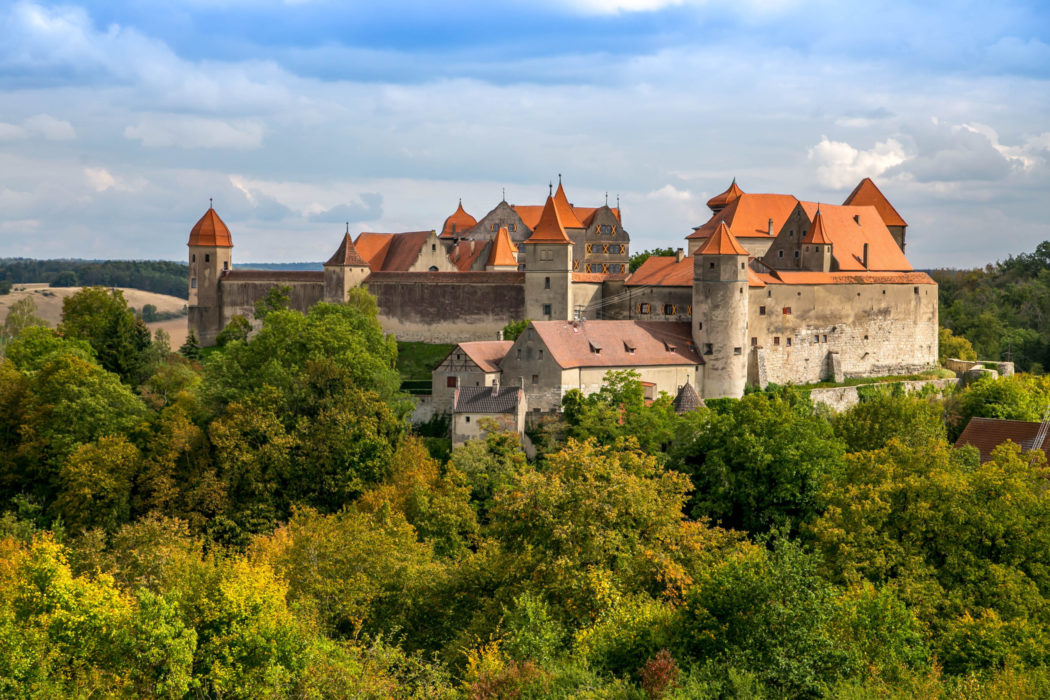 Harburg is a quaint little village filled with half-timbered houses, nestled on the banks of the Wörnitz river. Standing on a hill overlooking the cobbled lanes is Harburg Castle – one of the oldest surviving castles in Germany, that miraculously has never been severely damaged by war. An impressive mix of architectural styles grew around the medieval core over the centuries. To see the richly decorated interiors, take a guided tour, and don’t forget to delve into the dungeon!

Augsburg is one of Germany’s oldest cities, and historically, one of its most affluent. It was the seat of the prominent Fugger family, the bankers to the Habsburgs, who created the ‘Fuggerei’ in 1516. This charming neighborhood was the world’s first social housing, and still operates on the same virtually rent-free principle today. A few of the apartments are even open for viewing to see how residents lived then and now, and there’s a small museum dedicated to its philanthropic founders.

Along with pioneering social welfare, Augsburg has been a leader in hydraulic engineering since the 15th century, with its UNESCO-listed network of canals and water towers supplying everything from the city fountains to a water-cooled butchers’ hall. The city is also renowned for its wealth of Rococo monuments (so much so that it was called the Augsburg style in Germany), the standout of which is the City Hall and its decadent Golden Hall.

And don’t miss the Cathedral of Augsburg for its 11th and 14th century architecture and medieval artwork, including Germany’s oldest stained glass windows. If you’re looking to finish off the night with a show, try one at the Augsburger Puppenkiste, Augsburg’s famous marionette theatre.

After admiring Augsburg’s diverse historical offerings, set a course for Fussen for the final stretch of the Romantic Road, and some of its most culturally important sites. 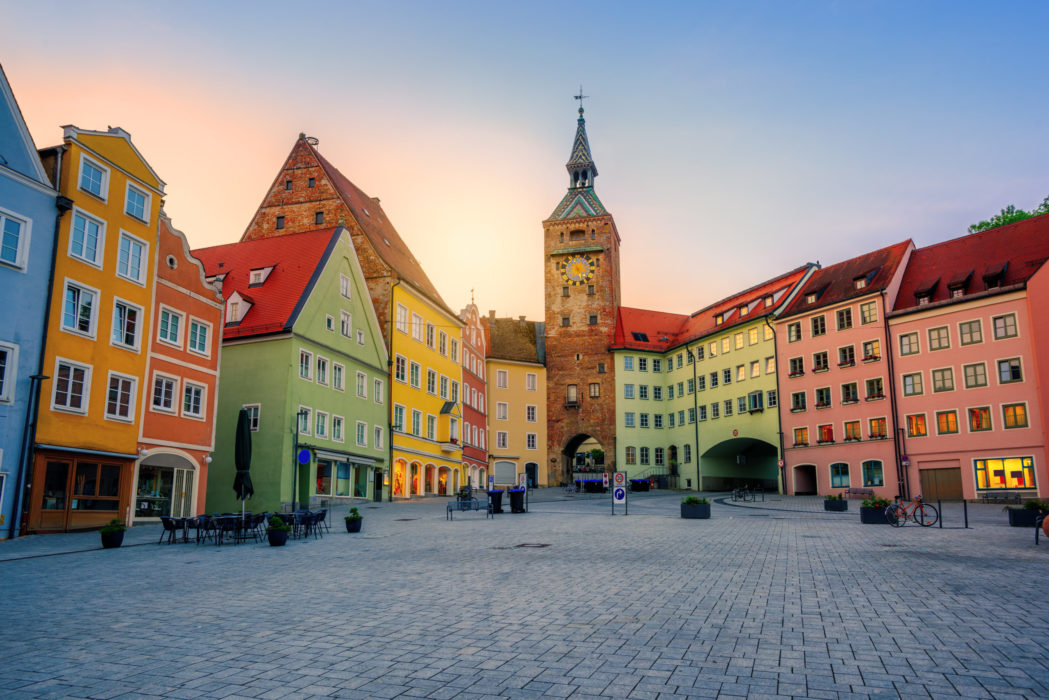 Landsberg am Lech flourished through the centuries as an important river crossing and trade town. Taxes from passing traders allowed it to build a wealth of beautiful buildings. Painted in pastel colors and lining quiet cobbled streets, the quaint village is surprisingly tourist-free. You should start your visit in the main square, where you’ll find the striking, stuccoed 18th century rathaus. Inside, along with the tourist office are some fantastic frescoes that tell the town’s history. Though decidedly charming, Landsberg is most famous for its prison, where Hitler wrote “Mein Kampf” while enjoying an entire wing to himself and dining on cakes, chocolates, wine, ham, and sausages. While you can view it from the outside in passing, they are quite intolerant of lingering visitors in an attempt to prevent it from becoming a Neo-Nazi pilgrimage site – that and it’s still a functioning prison. 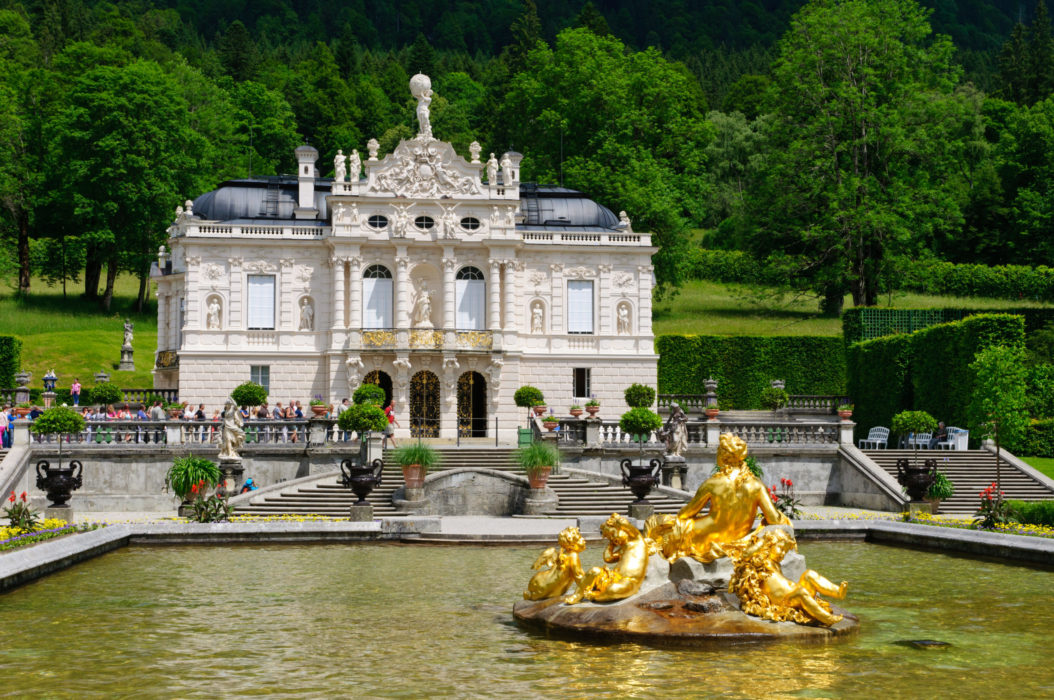 A flight of fancy built by the “Mad King” Ludwig II of Bavaria, Linderhof Palace took inspiration from the decadent projects of Louis XIV and XV to allow the eccentric ruler a poetic escape into distant places and past eras. It was the only one of the royal residences that Ludwig II lived to see completed. The building interiors are dripping with gilding, tapestries and ornate embellishments. There’s even a miniaturized version of the Ambassador’s staircase in Versailles. The surrounding gardens are equally whimsical, with formal gardens surrounding a fountain fed by a made-made waterfall, and a small lake complete with illuminated artificial grotto housing a shell-shaped boat surrounded by garlands of flowers. While Linderhof is the smallest of Ludwig’s creations, it’s no less opulent. 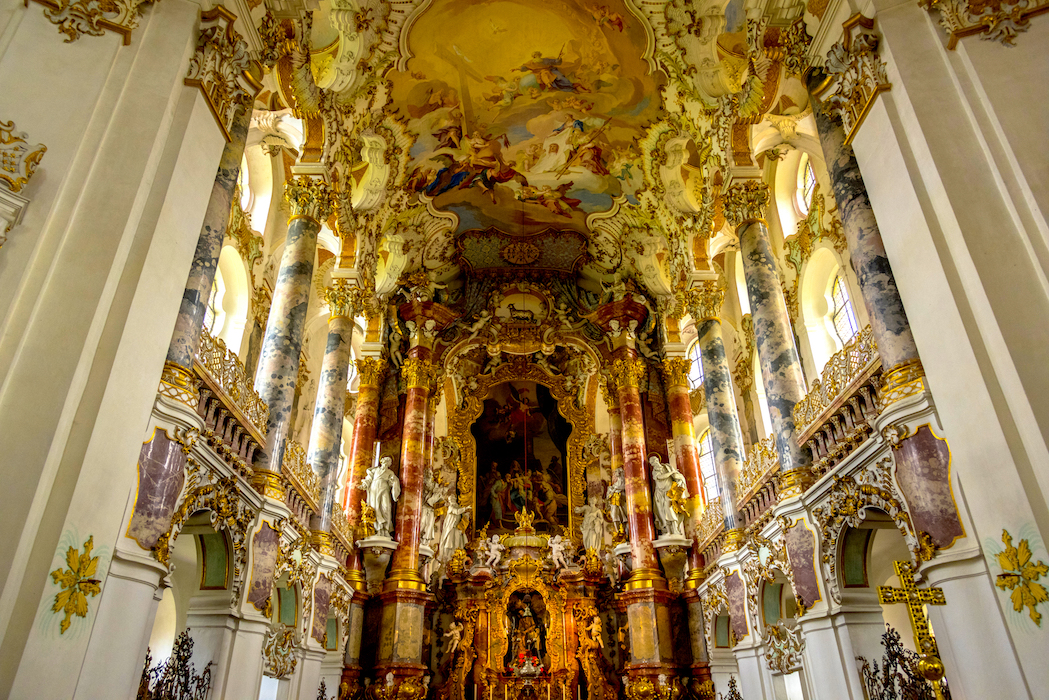 The Wieskirche was built in the mid-18th century to accommodate the huge number of pilgrims coming to see the dilapidated wooden figure of the Scourged Saviour, which is said to have miraculously shed tears a few years prior. But even agnostics can stop to marvel at what might be the pinnacle of the Rococo style. The church’s intricate stucco work, stunning ceiling fresco, and altarpiece by Munich court painter Balthasar August Albrecht are all airily illuminated by rows of windows, creating a divine artistic vision.

Fussen ends the Romantic Road on a high note, with visions of the Alps backing the medieval old town. The cobbled streets are lined with buildings dating back 700 years. Watching over the town is the High Palace, one of the region’s largest and best-preserved late-Gothic castle complexes. The facade bears striking 500 year old trompe l’oeil paintings. Inside, the bishops’ living rooms now house a State Collection of paintings from the late Gothic and Renaissance periods. Right below the castle is the Baroque St Mang’s Benedictine Monastery, which showcases the surprising wealth of the Benedictine foundation. Among its treasures are Bavaria’s oldest preserved fresco, and the region’s oldest death dance.

Fussen’s most famous landmark is actually a few kilometers outside of town: the world-famous Neuschwanstein castle. A fairy-tale made manifest by the Mad King Ludwig II, the hilltop castle is a Romantic reimagining of medieval magic, with a healthy helping of inspiration from the works of his friend Richard Wagner. Because Ludwig died before the castle was completed, only around 15 rooms were finished. These are all rendered in an opulent display of medieval historicism filled with depictions of Wagner’s characters. Neuschwanstein is one of the most popular sights in Germany, so book your tour in advance if you’d like to go inside.

If you’re traveling with Daytrip, you can visit Neuschwanstein castle as an additional stop on your trip from Augsburg to Fussen to make it even more convenient!

Did this post inspire your to plan a trip on Germany’s Romantic Road? Here are the links to book each leg with Daytrip, so you can sit back and enjoy the Bavarian scenery. If you ever need help, just contact Daytrip customer service!