Chock full of charming, colorful villages and stupendous views, the Amalfi Coast is one of Italy’s most irresistible destinations. It’s also an unmissable stop on a tour of Southern Italy. But with so many attractive options, it can be tough to decide exactly where to stay in the Amalfi Coast.

Fortunately, we’re here to break down the pros and cons of each so you can decide which town fits your holiday preferences and budget. And once you’ve decided, you can read about how to get from Rome to the Amalfi Coast.

Where is the Amalfi Coast?

The Amalfi Coast lies on the western coast of southern Italy (think the “shin” of Italy’s “boot”). Lying on the southern shores of the Sorrentine Peninsula, this 11,231 hectare spur of land jutting out into the Tyrrhenian Sea divides the Gulf of Naples and the Gulf of Salerno. In the Province of Salerno, just south of Naples, Mt. Vesuvius, and the remains of Pompeii, the Mediterranean climate here provides warm summers and mild winters. Positano, Praiano, Amalfi, and Ravello are the most popular towns on the Amalfi Coast, with Sorrento being a prime choice nearby. 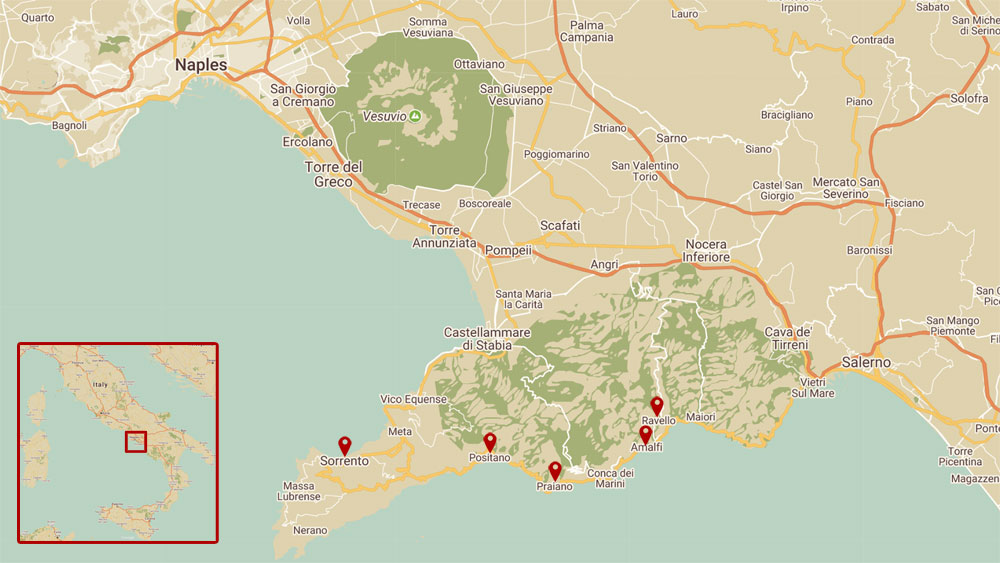 When deciding which town on the Amalfi Coast is best for you, you should first prioritize what’s most important to you on your vacation.

An Overview of the Coast

Sorrento: The Gateway to the Amalfi Coast 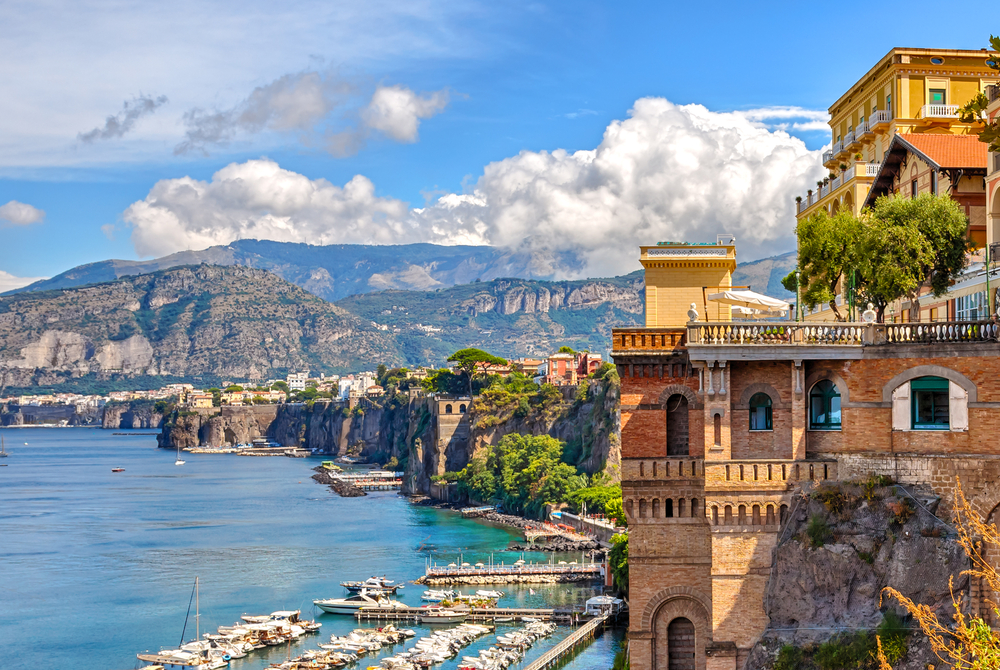 Settled by the Ancient Greeks, the dramatic clifftop city of Sorrento became a staple holiday destination in the 19th century when Lord Byron brought it to the attention of the vacationing literary geniuses including Dickens, Goethe, and Tolstoy. This stunning city has been attracting discerning travelers ever since, who are treated to stunning views, as well as beautiful historic monuments, such as the Cathedral, the doors of which originated in Constantinople in the 11th century.

Known as ‘The Gateway to the Amalfi Coast’, Sorrento isn’t technically on the Amalfi Coast. Instead, this coastal town overlooks a bay to the west. It’s a picturesque base of operations for travelers who want to rent their own car to experience the renowned, 43-mile Amalfi Coast Drive on their own, or make day-trips to see various Amalfi towns. There are a few options on how to get from Naples to Sorrento. But we say a private transfer is the best. Naples to Sorrento with Daytrip only takes an hour, and you can stop to see Pompeii along the way!

Positano: The Pretty, Popular One

Positano was an important port for the ancient Greeks and Phoenicians, and prospered under the Amalfi Republic during the sixteenth and seventeenth centuries. However, unlike other nearby towns, Positano wasn’t a hot holiday destination for 19th century intellectuals. Rather, it was an essay by John Steinbeck for Harper’s Bazaar that brought this poor fishing village to the attention of the world’s jet setters. Because of this historic disparity, Positano’s a colorful jumble of fisherman’s houses, dominated by the majestic church of Santa Maria Assunta, with its colorful majolica tile dome, lavish Rococo interior, and legendary 13th century Byzantine black Madonna icon. However, for many the main attraction is the Marina Grande beach, the most recognizable stretch of sand on the entire Amalfi coast.

The most western town on the Amalfi Coast, Positano is one of the prettiest, and also one of the most popular. With its colorful buildings, and dramatic mountainous backdrop, it’s the very essence of the Amalfi Coast’s alluring aesthetic. However, this hasn’t exactly been kept a secret as Positano is the most popular Amalfi town to visit. Even so, most travelers have trouble figuring out how to get from Naples to Positano. That’s because the only direct way to get to from Naples to Positano is to book a private car transfer.

+Charming houses and beautiful views
+Beach access
+Buses and ferries make it easy to visit other towns on the Amalfi Coast
+Caters to tourists, so plenty of restaurants

Amalfi: The Heart of the Coast 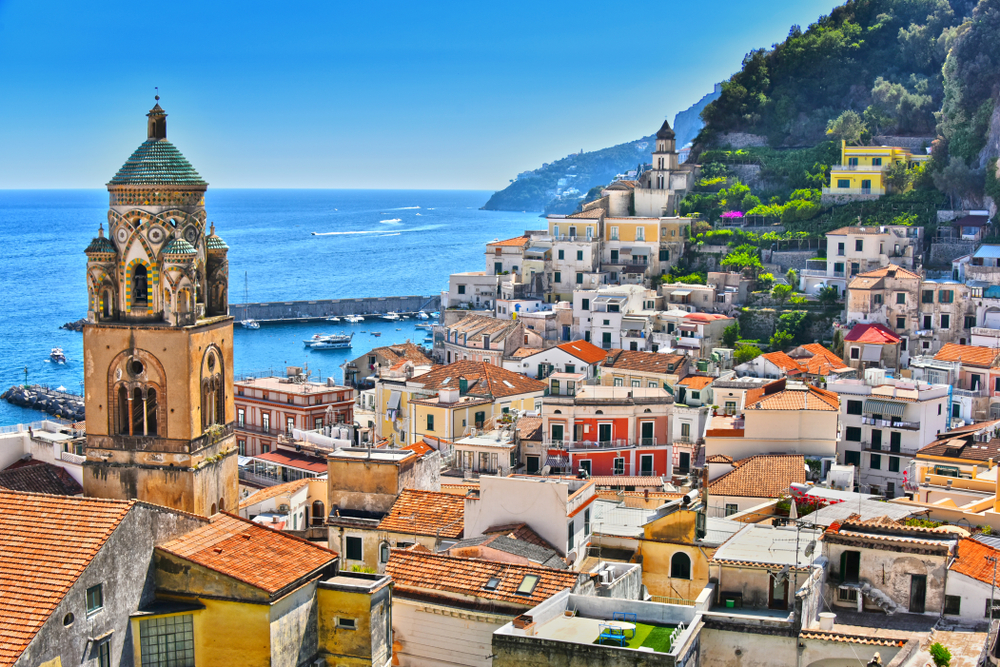 It’s hard to imagine the little town of Amalfi was once a maritime superpower that was buying up land and privileges with gold coins when most of Italy was still working with a barter system. However, a tsunami in 1343 destroyed the port and much of the town, reducing it to a regional fishing village and decimating many of its historic landmarks. Despite this, the weather buildings exude history, with the tile-topped campanile providing a pretty point of reference. The 9th century cathedral is a striking mixture of Arab and Romanesque architectural styles with a decadent Baroque interior, and houses the relics of St. Andrew.

The Amalfi Coast’s namesake town, Amalfi is the perfect ‘sampler’. It’s centrally located, has the largest beach on the entire Amalfi coast, and is relatively flat, making it great to explore, especially if you have kids or don’t want to climb steep stairways. Thanks to its central location, and plenty of busses, ferries, and tours based here, Amalfi is also a great base of operations for exploring the rest of the coast. Even though Amalfi is the main hub on the coast, it still takes several transfers to get from Rome to Amalfi on public transport, so a door-to-door ride will save you a lot of hassle.

+Not as hilly as Positano and Praiano
+Easy beach access
+Pretty town
+Plenty of busses, ferries, and tours make it easy to explore other towns
+Can walk to some other towns
+Lots of restaurants

-Pretty touristy
-Cruise ships stop here, so it can get flooded with people
-A bit more expensive than some other towns

Praiano: Quiet on the Coast 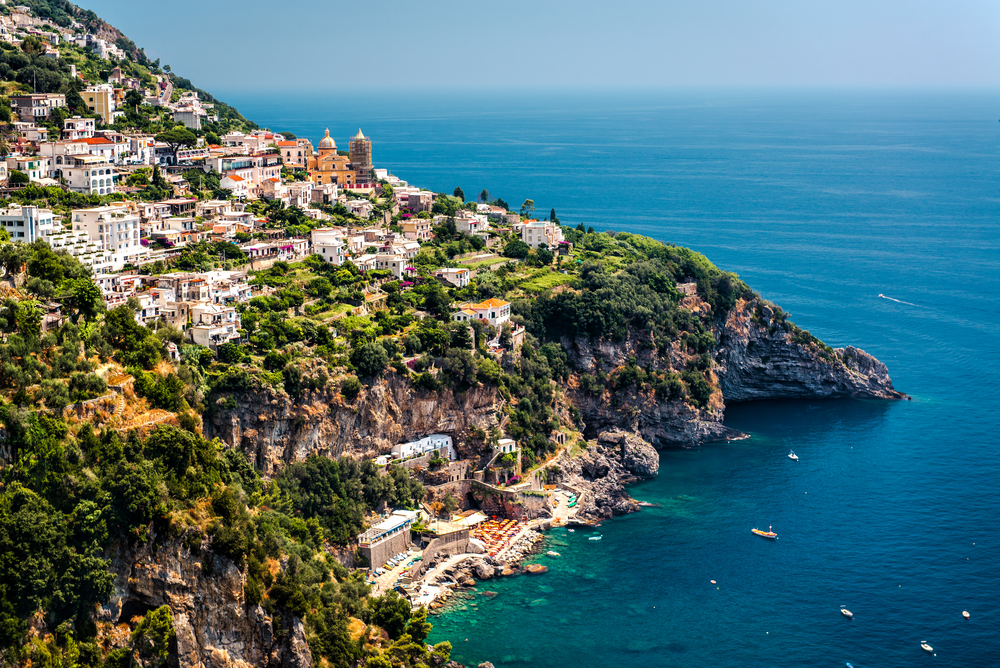 Praiano was favourite summer retreat for Roman patricians and Medieval dukes, who filled the picturesque position with striking monuments. Even today, the town is dominated by the 17th century Church of San Gennaro, with its Baroque facade. The humbler churches are also delightful, with the 12th century Church of San Luca Evangelista housing beautiful Renaissance paintings, and the the Church of San Giovanni Battista featuring a marvelous majolica tiled floor from the 12th century. A large part of Praiano’s economy still comes from fishing, so visitors are guaranteed some exceptional seafood dishes, such as lobster spaghetti.

Praiano is overlooked by many tourists, especially those coming by cruise ship, so is less crowded than other towns even though it’s just 15-20 minutes from Positano (in fact, you get a great view of it!). An added perk of Praiano’s relative obscurity is that accommodation is much cheaper than Positano, and you still get the benefits of a pretty coastal town, great views, and two great beaches. Praiano’s perfect if you’re looking to get the Amalfi Coast experience on a budget and don’t necessarily need to visit other towns. Being off the main tourist track also makes Praiano particularly problematic to reach by public transport. If you don’t want to lug your luggage onto a mix of trains and busses, a door-to-door transfer from Rome to Praiano with Daytrip will save you stress. And let you stop to see Pompeii or other sights on the way!

-Can be a lot of stairs to get to the beach
-Need to go to Positano first to get a bus or tours to other towns
-Busses fill up in high season, so it can take a long time to get to other towns

Ravello: A View to Die For 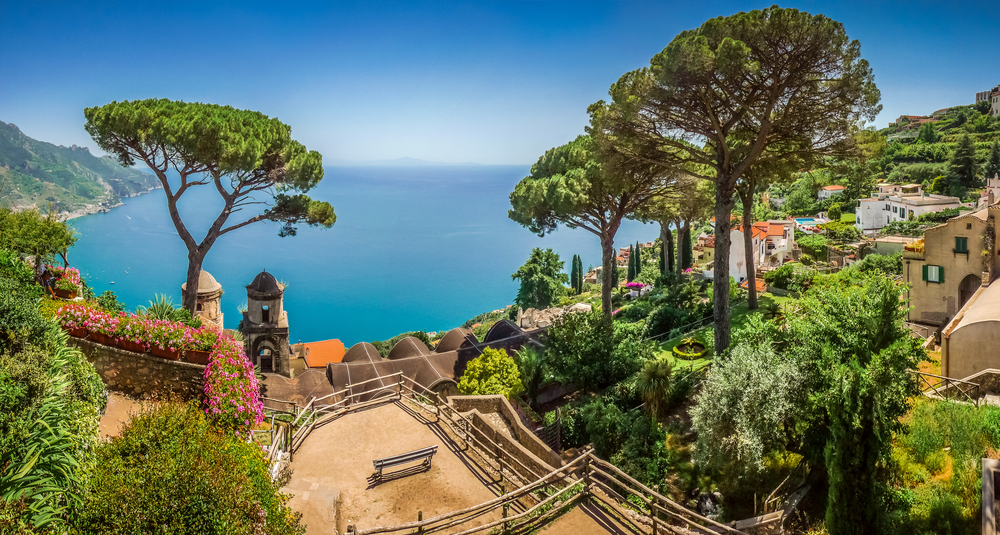 Ravello, situated on a mountain-top overlooking the coast, was founded in the 5th century as a refuge from the invading barbarian hordes. The town flourished as a mercantile center during the Middle Ages, during which time many exceptional landmarks were erected. This refined, historic atmosphere coupled with unparalleled views has been attracting artists, intellectuals, and celebrities for centuries, with notable visitors including M. C. Escher, Virginia Woolf, Greta Garbo, Truman Capote, Tennessee Williams, and Jacqueline Kennedy. At the 11th century Villa Cimbrone, visitors can step onto the ‘Terrace of the Infinite’, which was described by Gore Vidal as the most beautiful place he’d ever seen thanks to its sweeping views of the coast. But of the town’s many sights, the highlight is without a doubt the Villa Rufolo. The 13th century villa is renowned for its exceptional architecture and cascading gardens, which inspired Giovanni Boccaccio and Richard Wagner, and now host one of Italy’s finest music festivals (thanks to Wagner’s wife).

Ravello is perhaps the most elegant and dramatic of the Amalfi towns. Instead of a jumble of colorful houses along the shore, Ravello is renowned for its villas (Villa Rufolo is a UNESCO World Heritage Site!), gardens, and panoramic vistas, which attracted the likes of D.H Lawrence and Richard Wagner. If seaside activities aren’t at the top of your checklist, Ravello might be the place for you! Since Ravello requires several transfers to reach on public transport, it’s usually less crowded, but that also means you’ll probably want a door-to-door transfer from Naples to Ravello.

+Those views!
+Seriously, those views!
+Filled with beautiful, historic monuments and villas
+Less expensive than other Amalfi towns
+Quieter than the touristy towns

Once you’ve decided where you’re going, you can read our handy guide to learn how to get from Rome to the Amalfi Coast.